After leaving Ritou in Genshin Impact, one of the first side-quests the Traveller happens upon is A Strange Story in Konda, where a Shrine Maiden tasks them with finding a mysterious barrier and eventually with exploring the bottom of an equally mysterious well.

The islands of Inazuma hold many secrets, with all manner of consequences. This quest asks the Traveller and Paimon to put their detective skills to the test, as well as their puzzling prowess.

After talking to Kazari and using an electro character’s power on the fox shrine next to her. Take the Ward that appears and speak with Kazari again.

She now asks you to uncover the secret barrier by solving the mystery of the village. 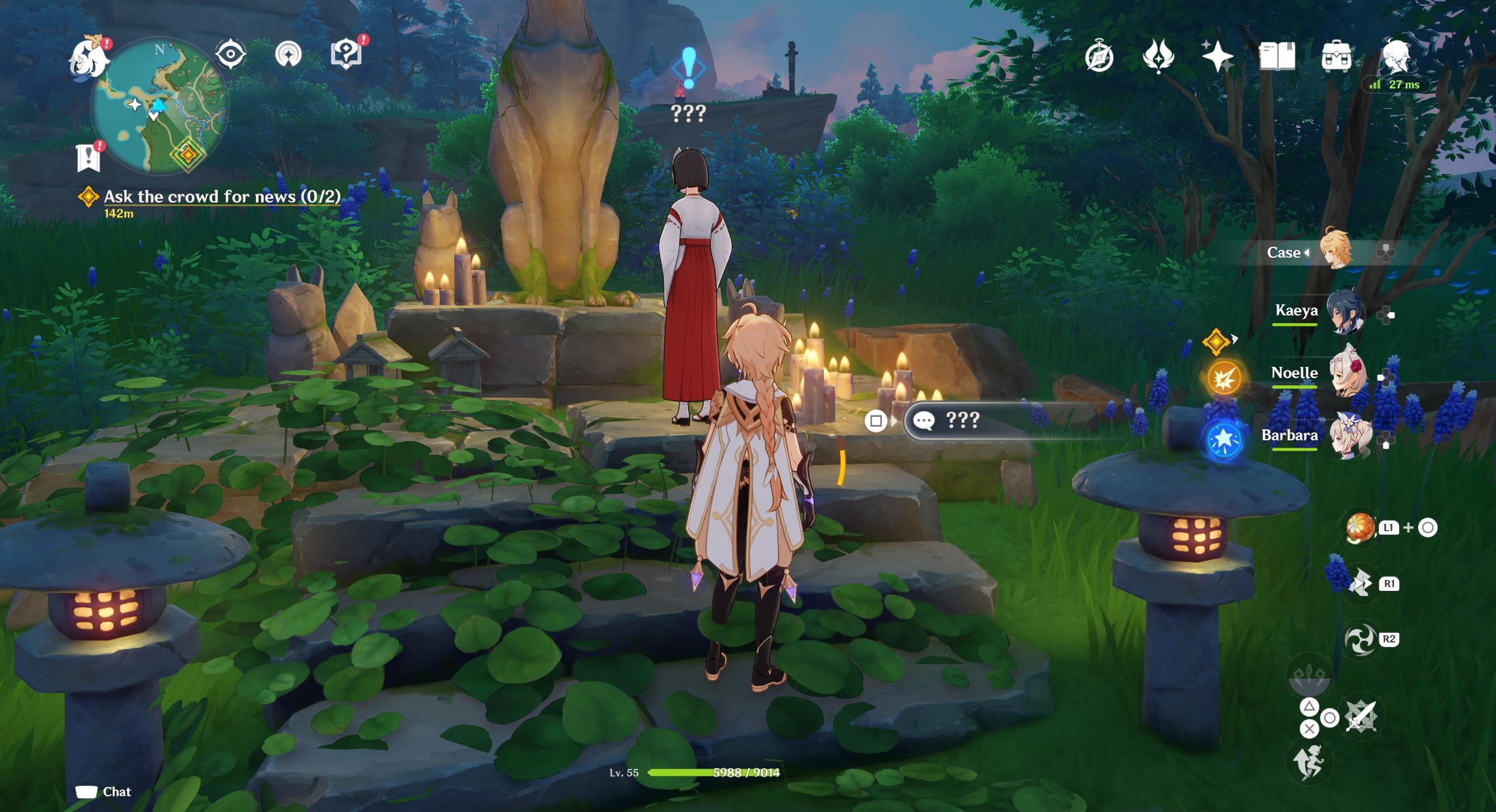 Head south from Kazari into Konda Village proper, where you’ll be directed to ask the locals for information.

In his yard, you’ll find an old man, Imatani Saburou. Speak to him about any strange happenings. 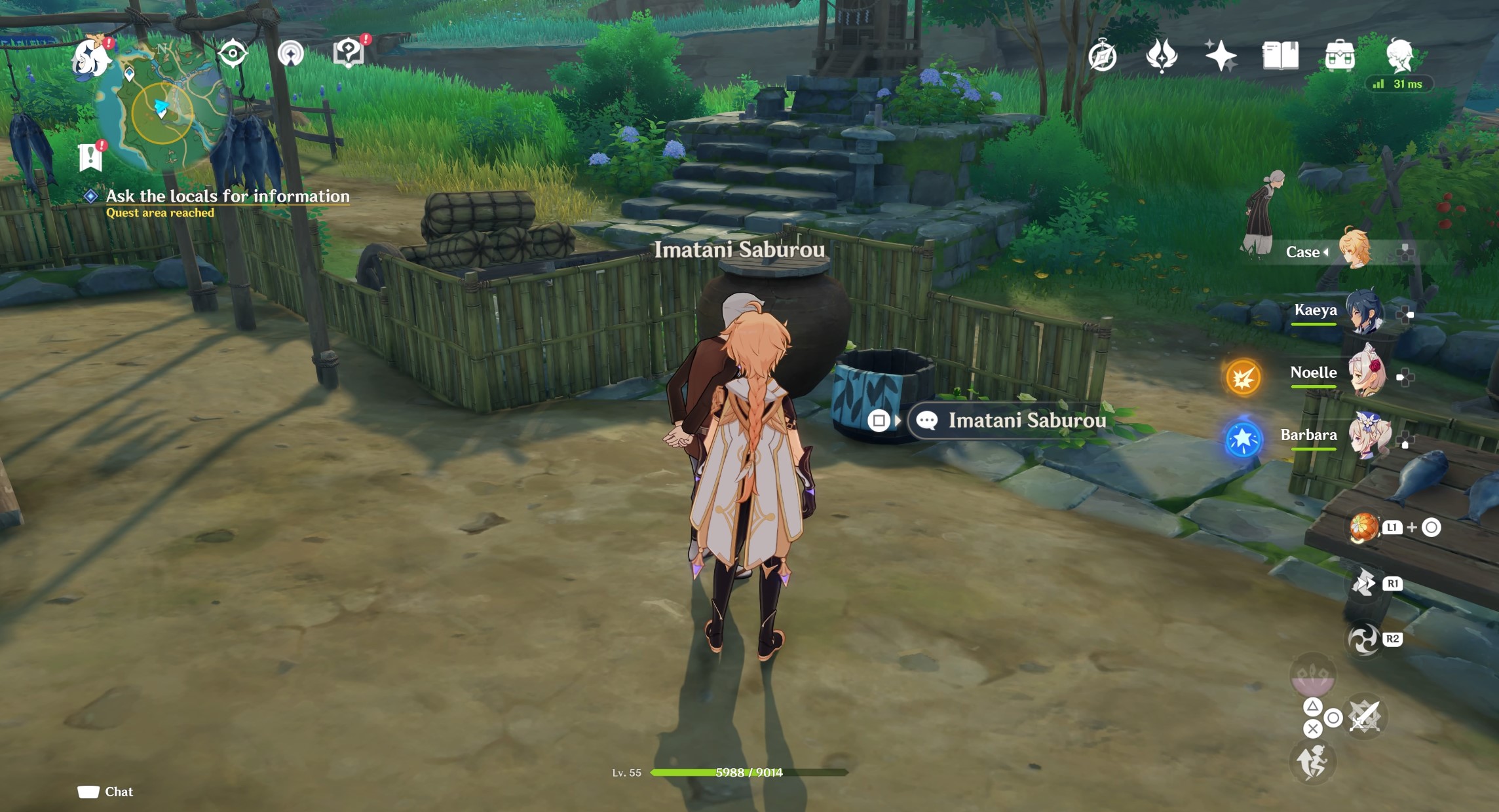 Next, go across the street and speak to Saimon Eri. She’ll mention a stash of Mora hidden in the dry well behind the village chief’s house. 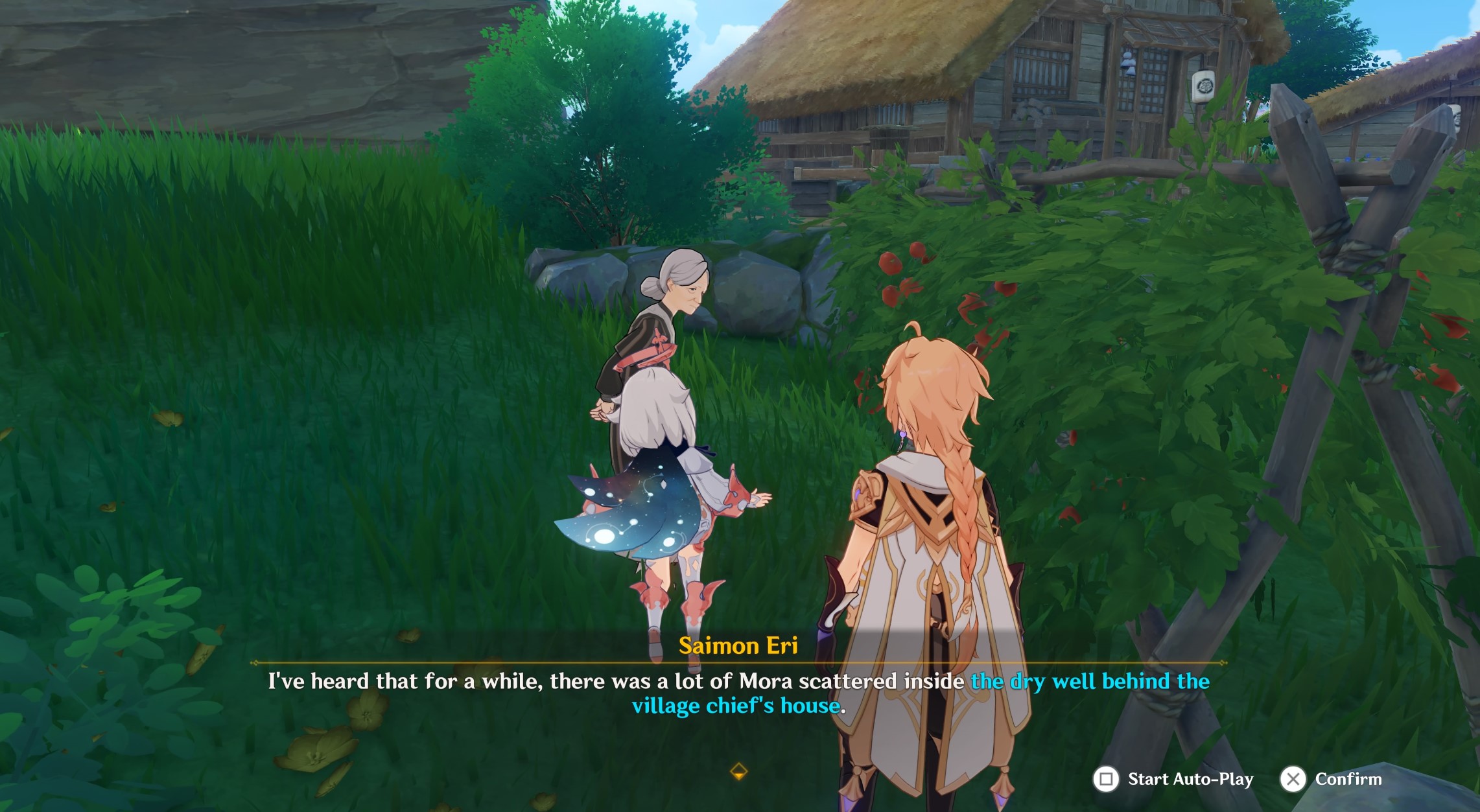 Make your way over to the western side of the village and speak to the chief, Konda Densuke. 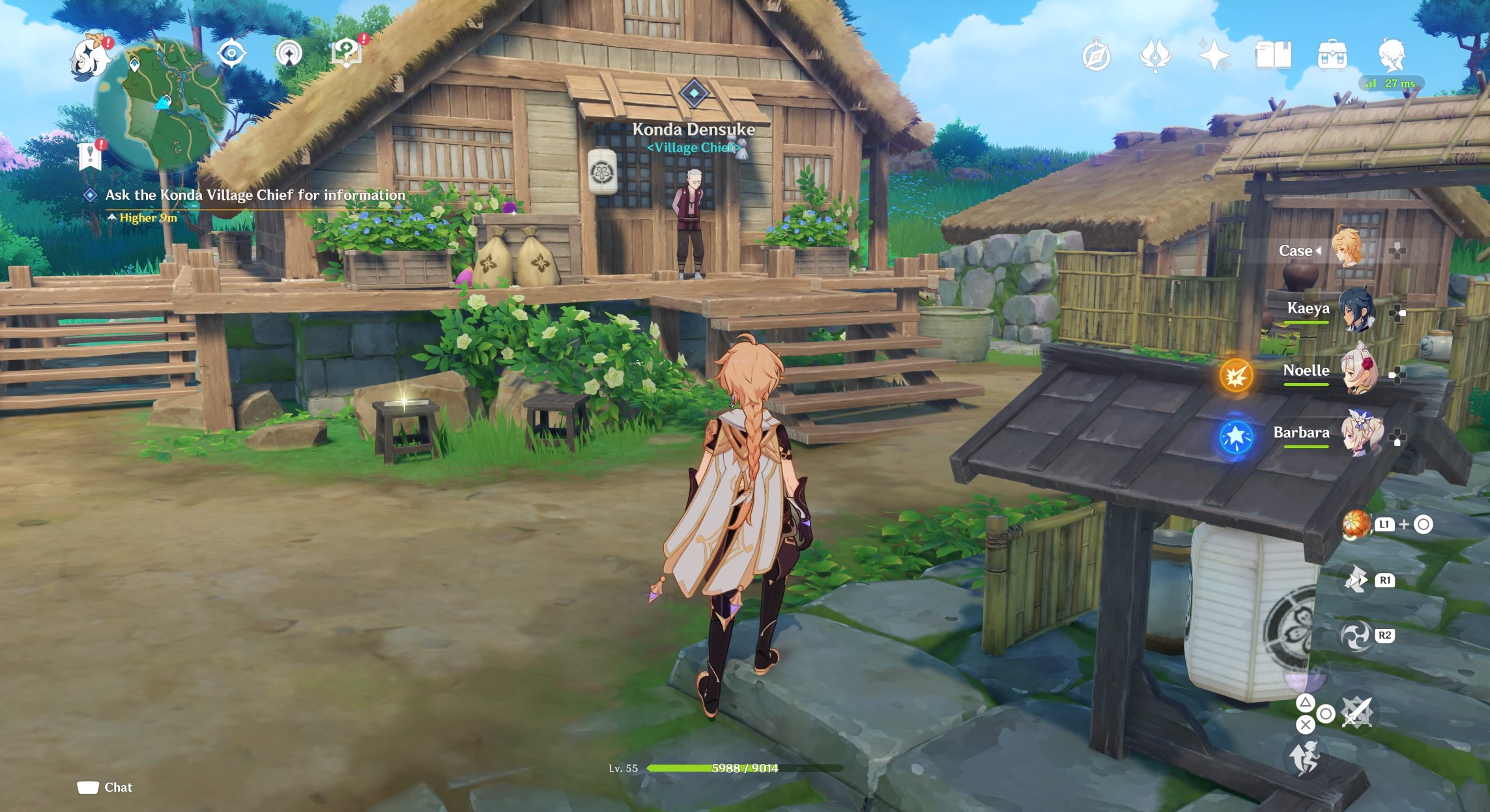 He’ll deflect your lines of questioning, so use your initiative and investigate the dry well behind his house anyway.

You indeed find an interestingly discarded pouch of Mora. 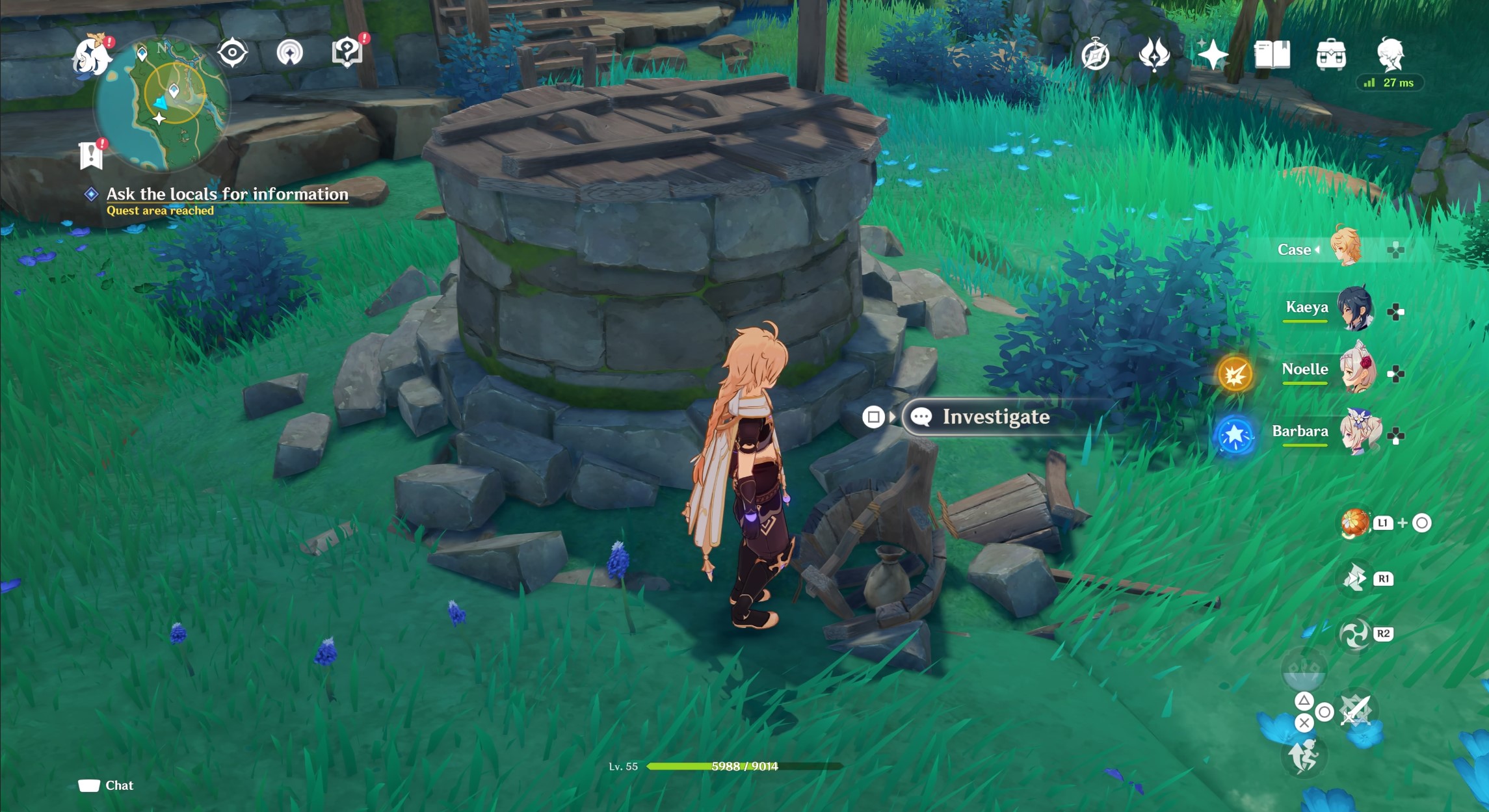 To continue the quest, you need to speak to more locals. Outside Densuke’s house, you’ll find his daughter, Futaba. 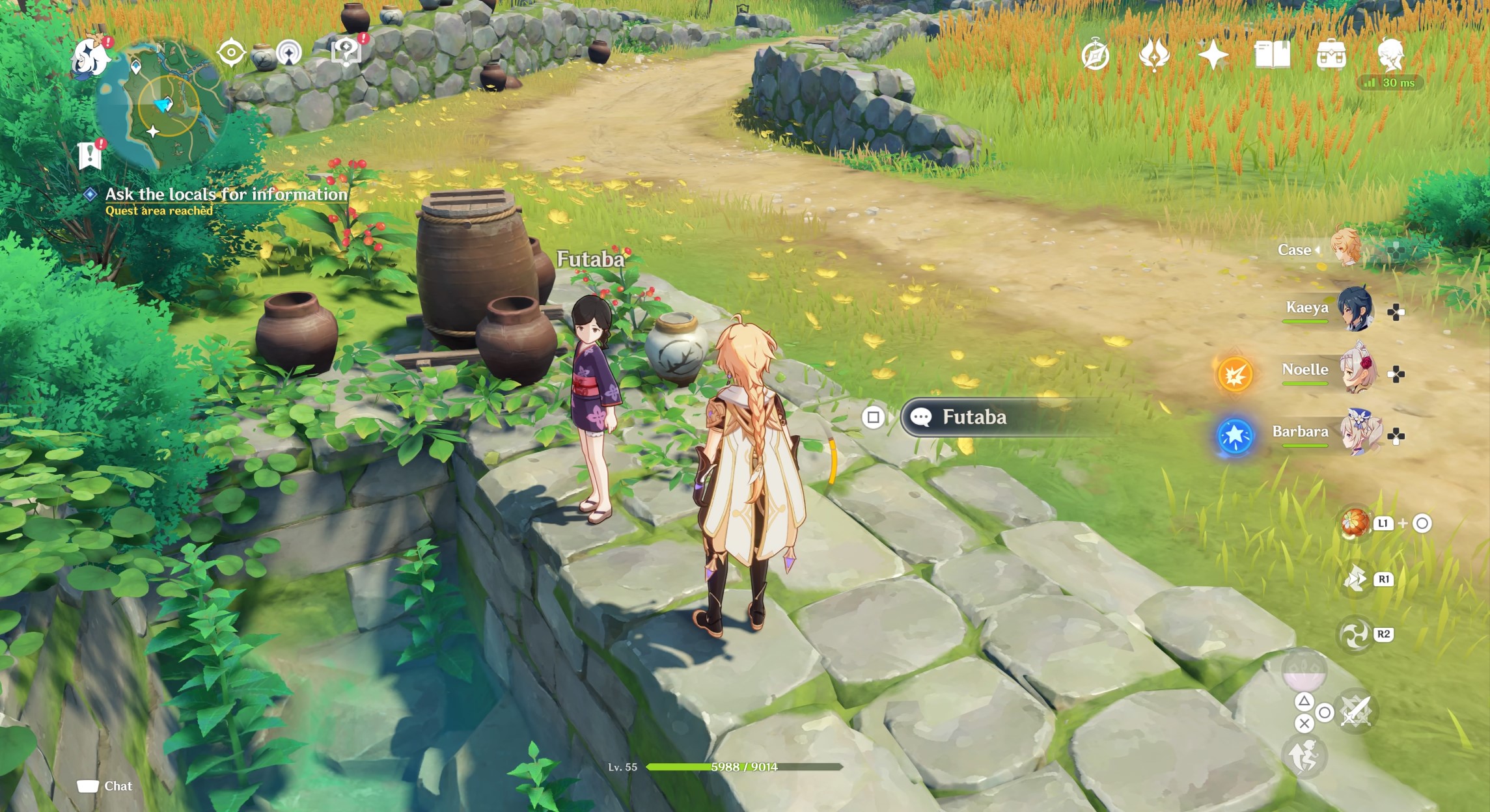 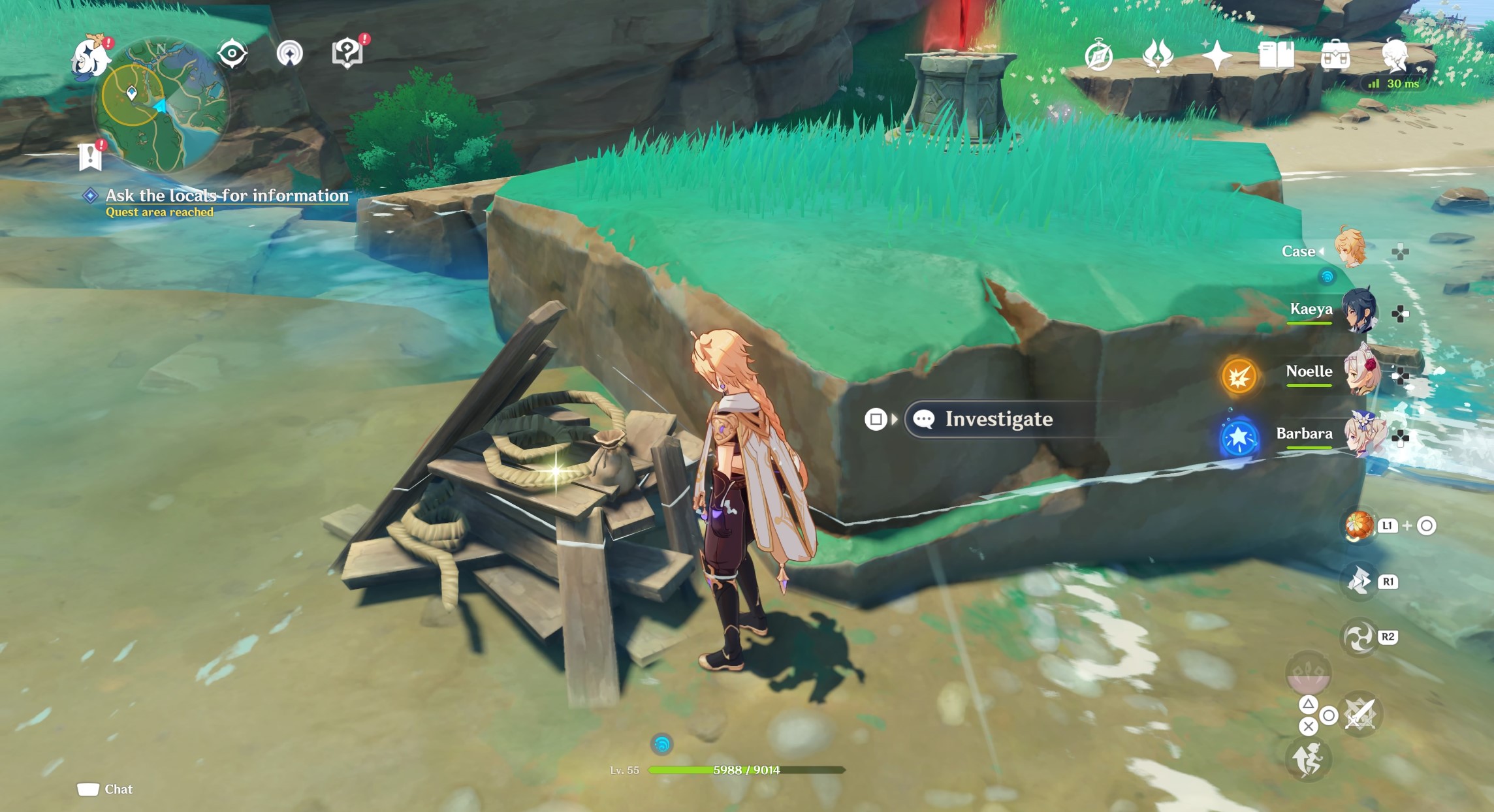 Futaba also mentioned Takeru, another child in the village, so return to the houses and look up on the roof on the eastern side. 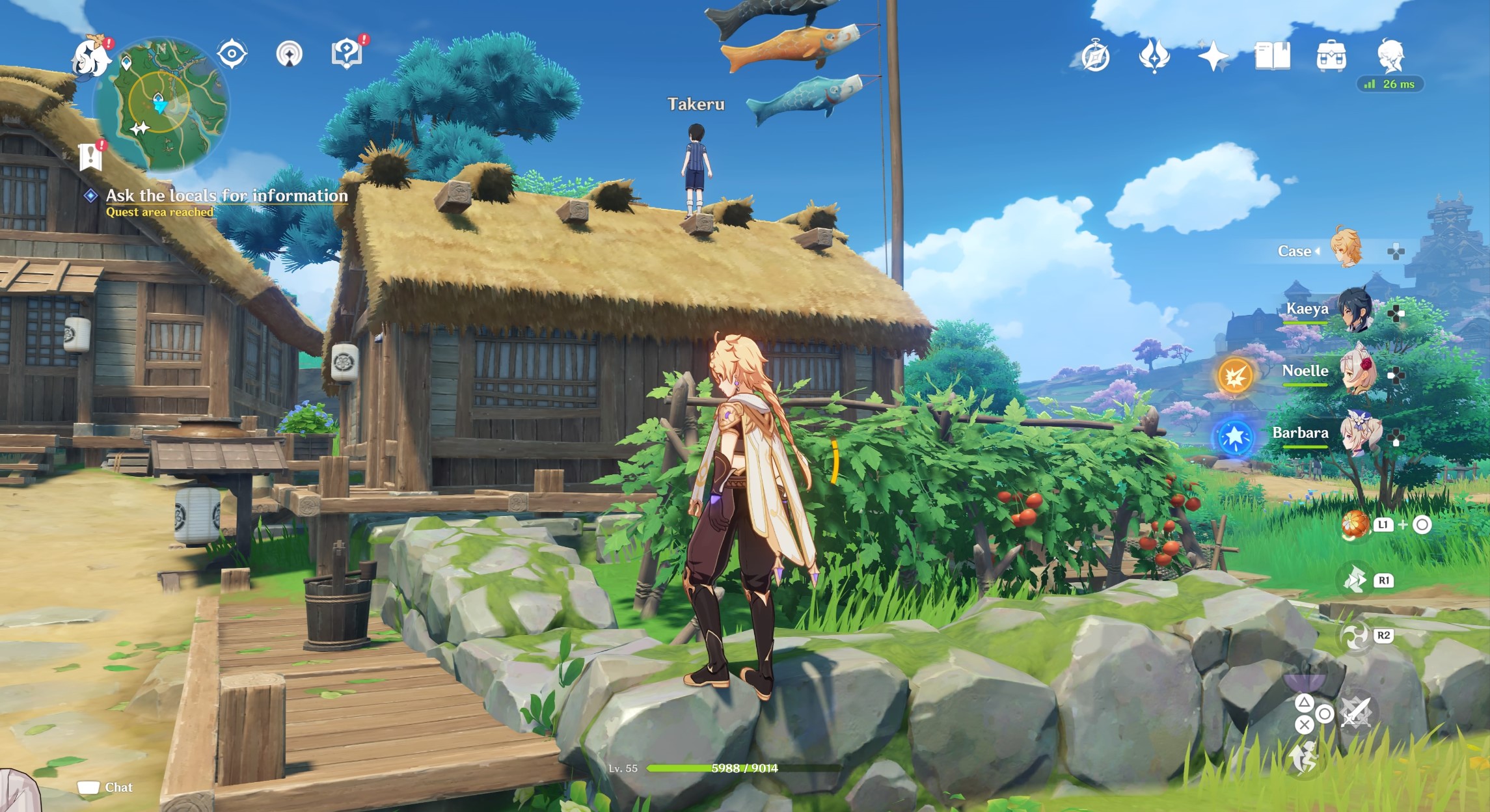 Climb up and speak to Takeru, who will tell you about a broken down cart out near the entrance to the village in the north.

Defeat the Hilichurls you find there, then investigate the cart. Armed with the documents you find, return to confront Densuke. 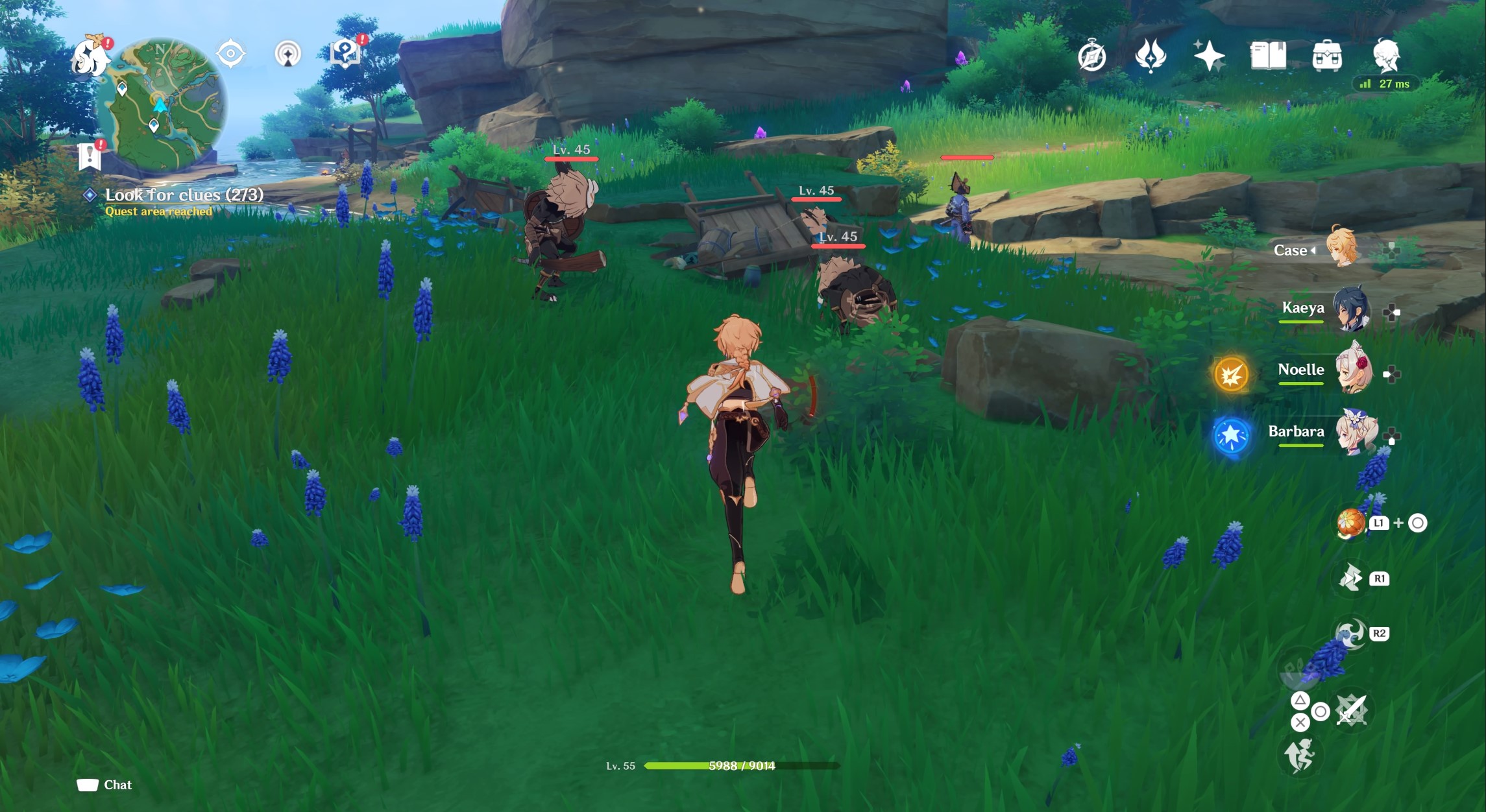 When he asks for evidence, first present the purse by the dried up well you found behind his house, then the floating pouch. 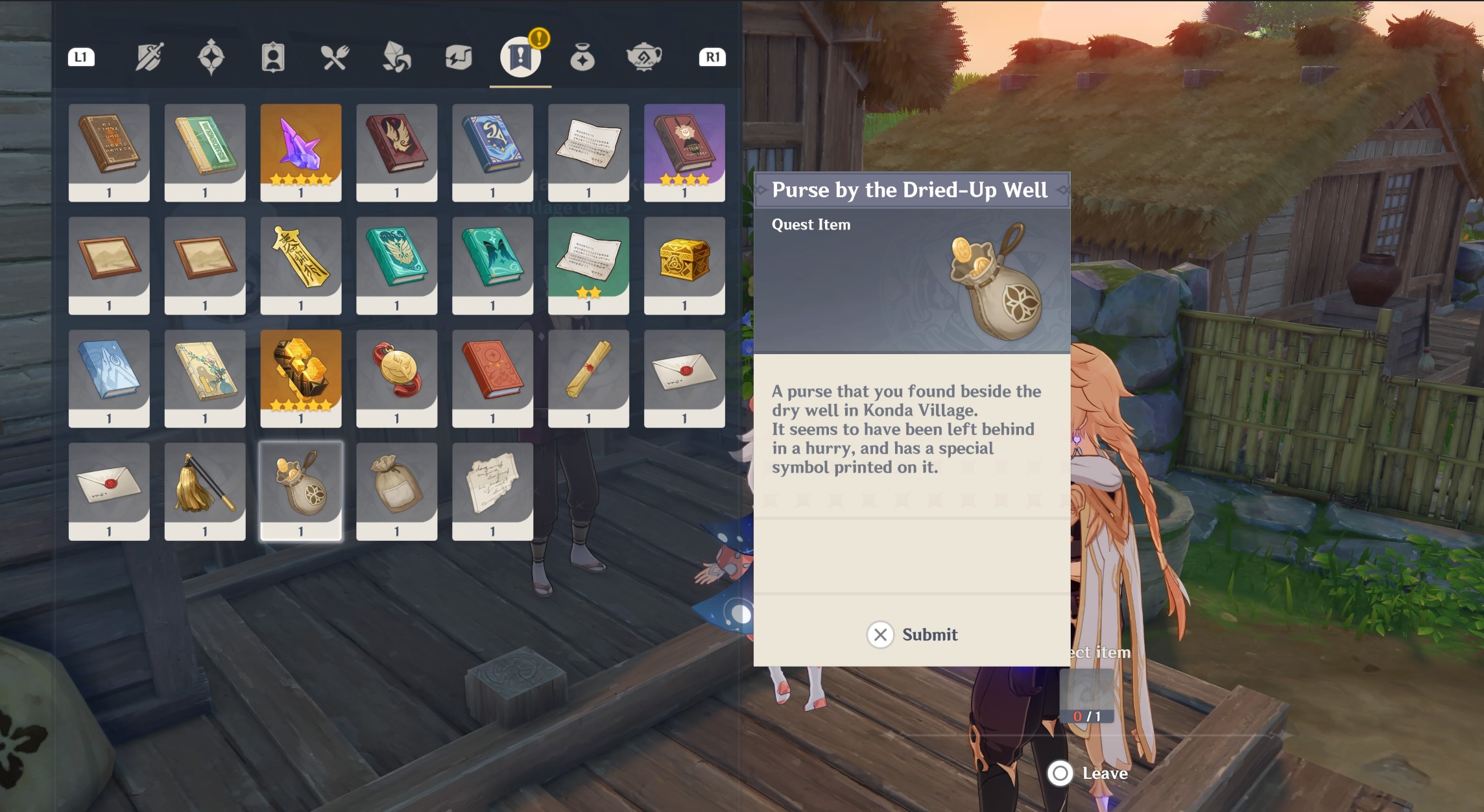 Finally, show him the ragged list of goods and he’ll have no room left to deny the truth. 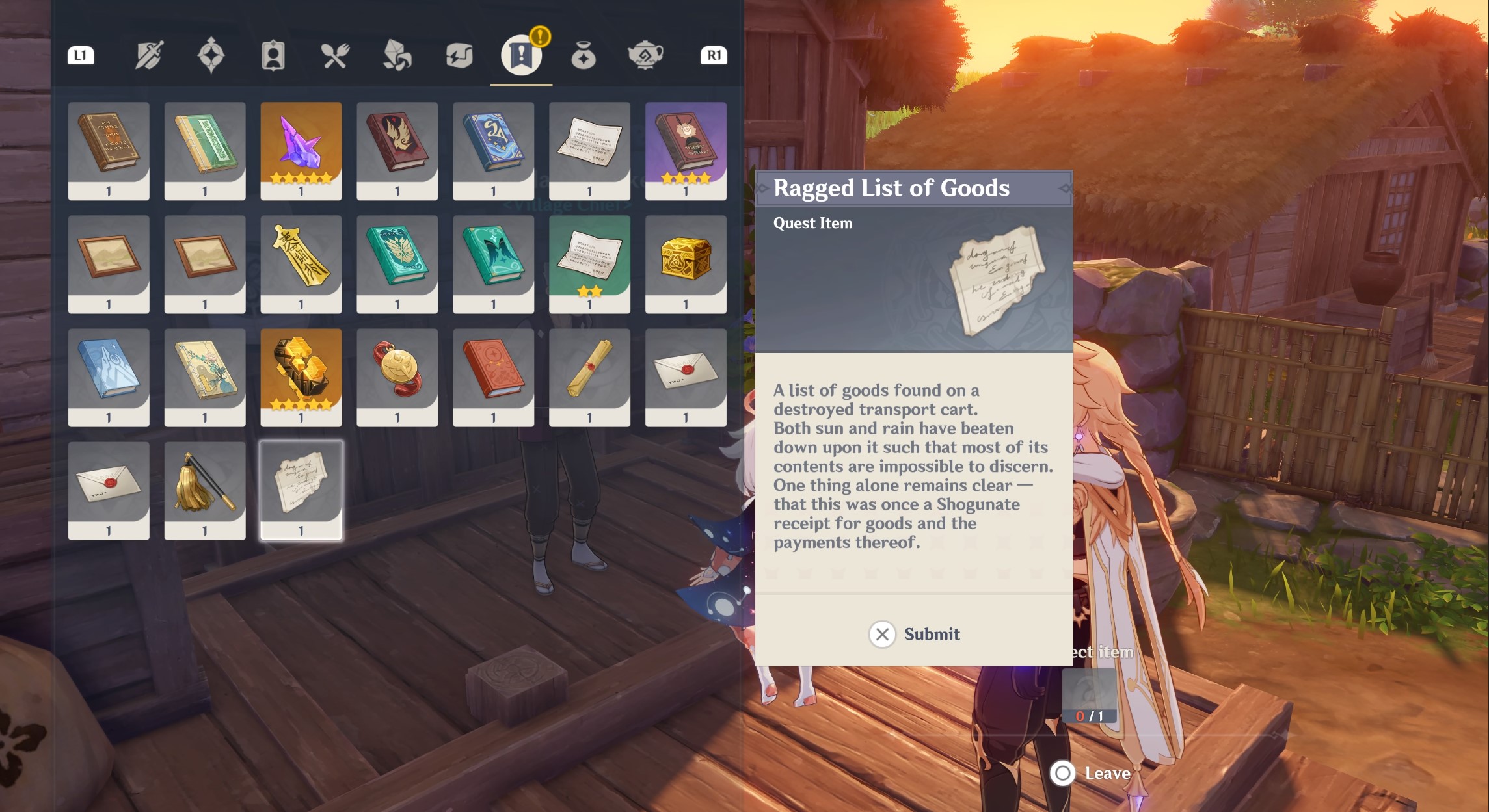 Climb onto the roof of his house for the location of the well key, which is on a cliff edge to the northeast of the houses. 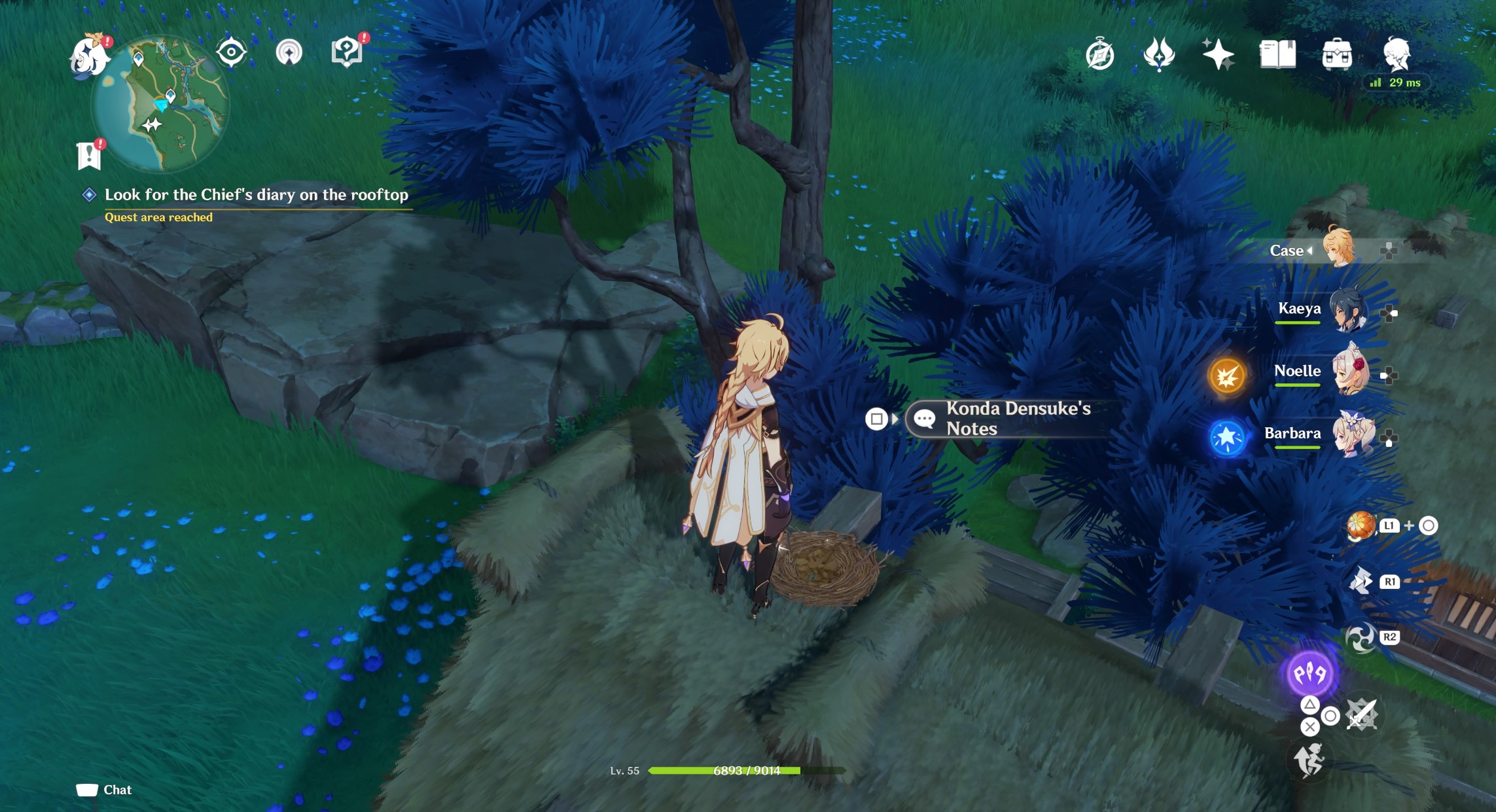 Defeat the samurai and treasure hoarders you find, then dig up the key they were guarding. 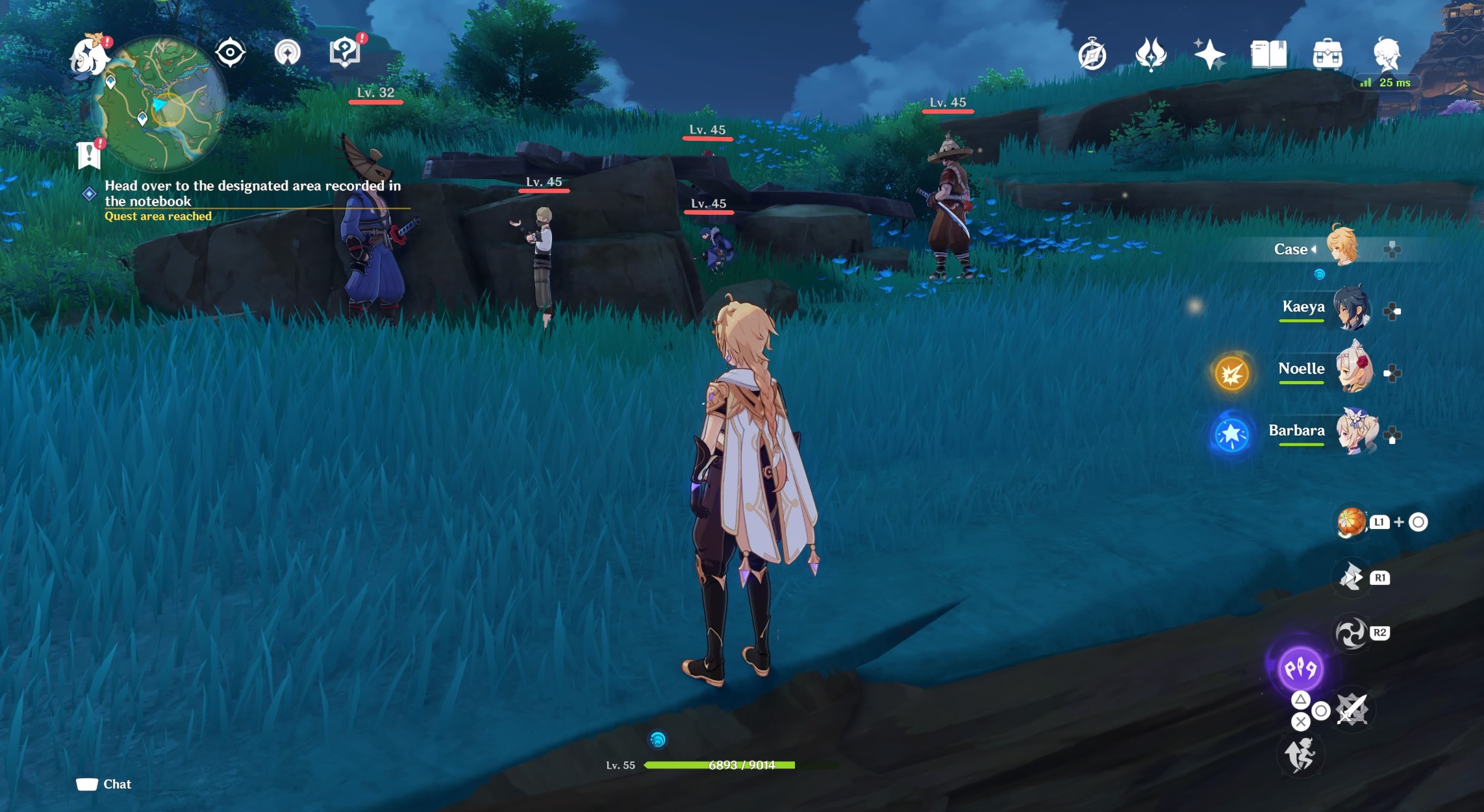 With the key in hand, return to the dried up well behind Densuke’s house and go inside.

At the bottom of the well shaft, look on the right hand wall. There’s a boulder here crackling with electro energy.

Use elemental attacks, like any character’s R2 attack, to break it. (Electro attacks won’t work.) 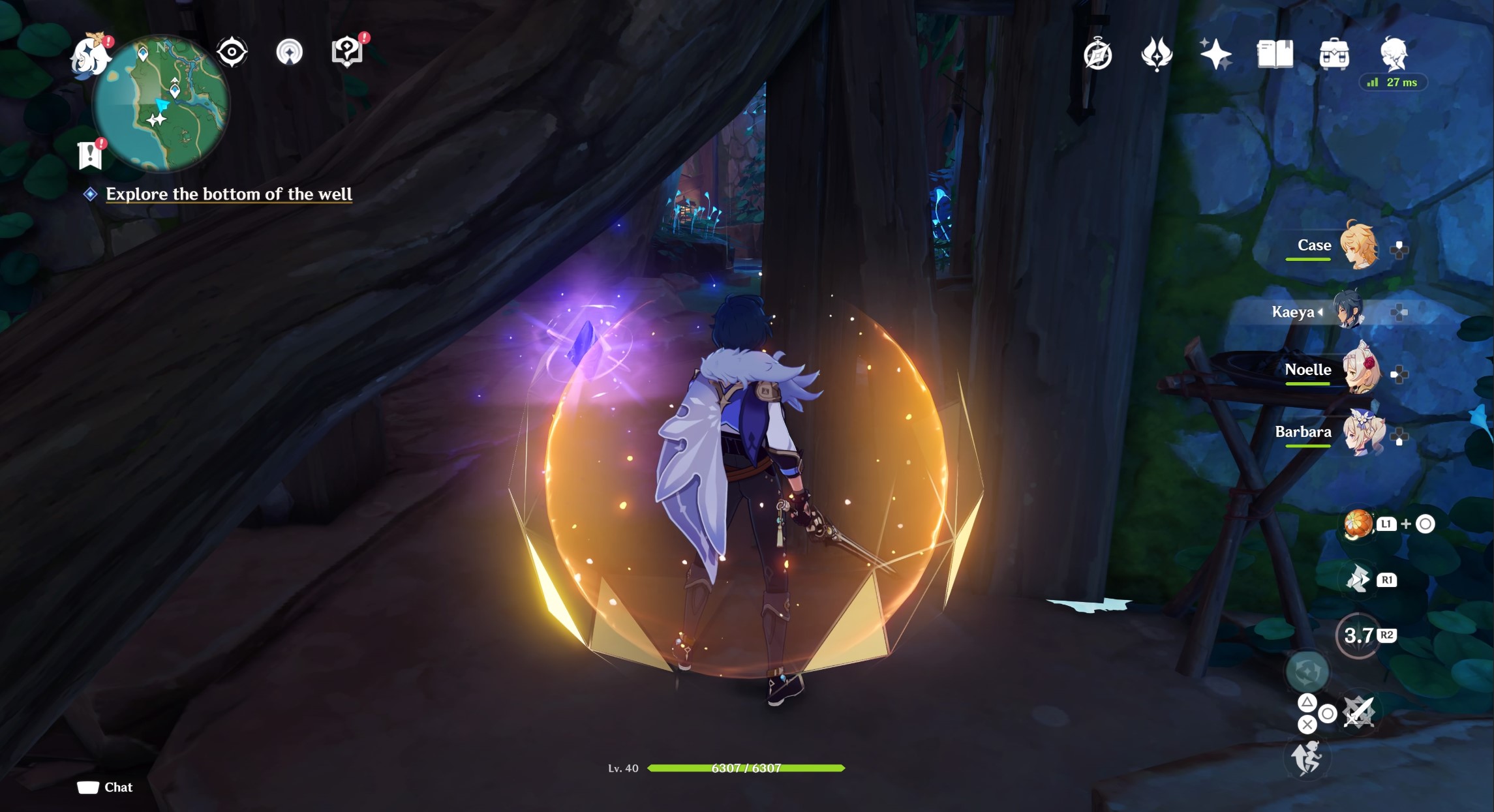 Follow the revealed path to further explore the bottom of the well. 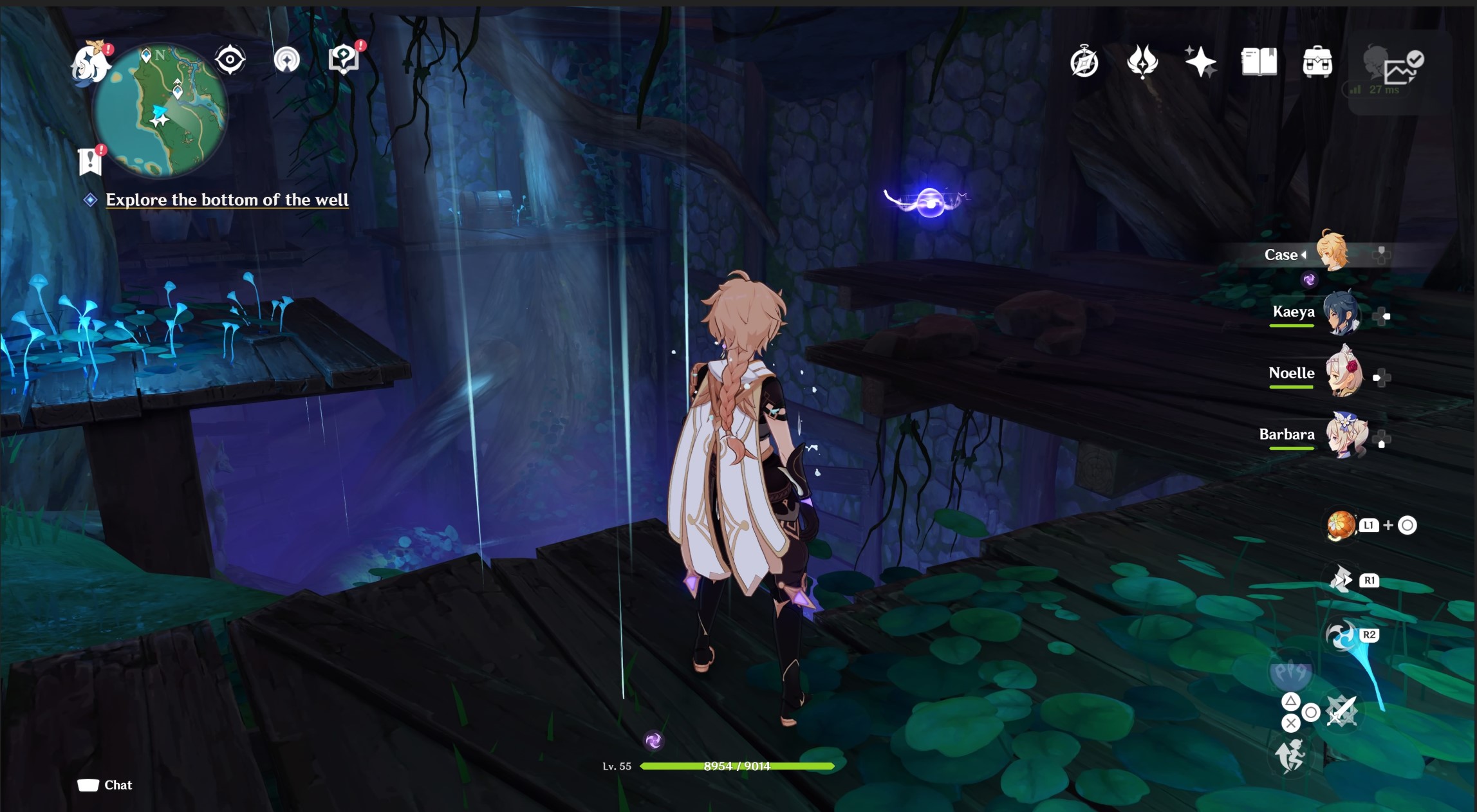 In the more open room at the end of the path, look to your left and you’ll see a purple growth of roots on the northern wall – remember this for later, because you’ll need it to pass the barrier at the bottom of this room. 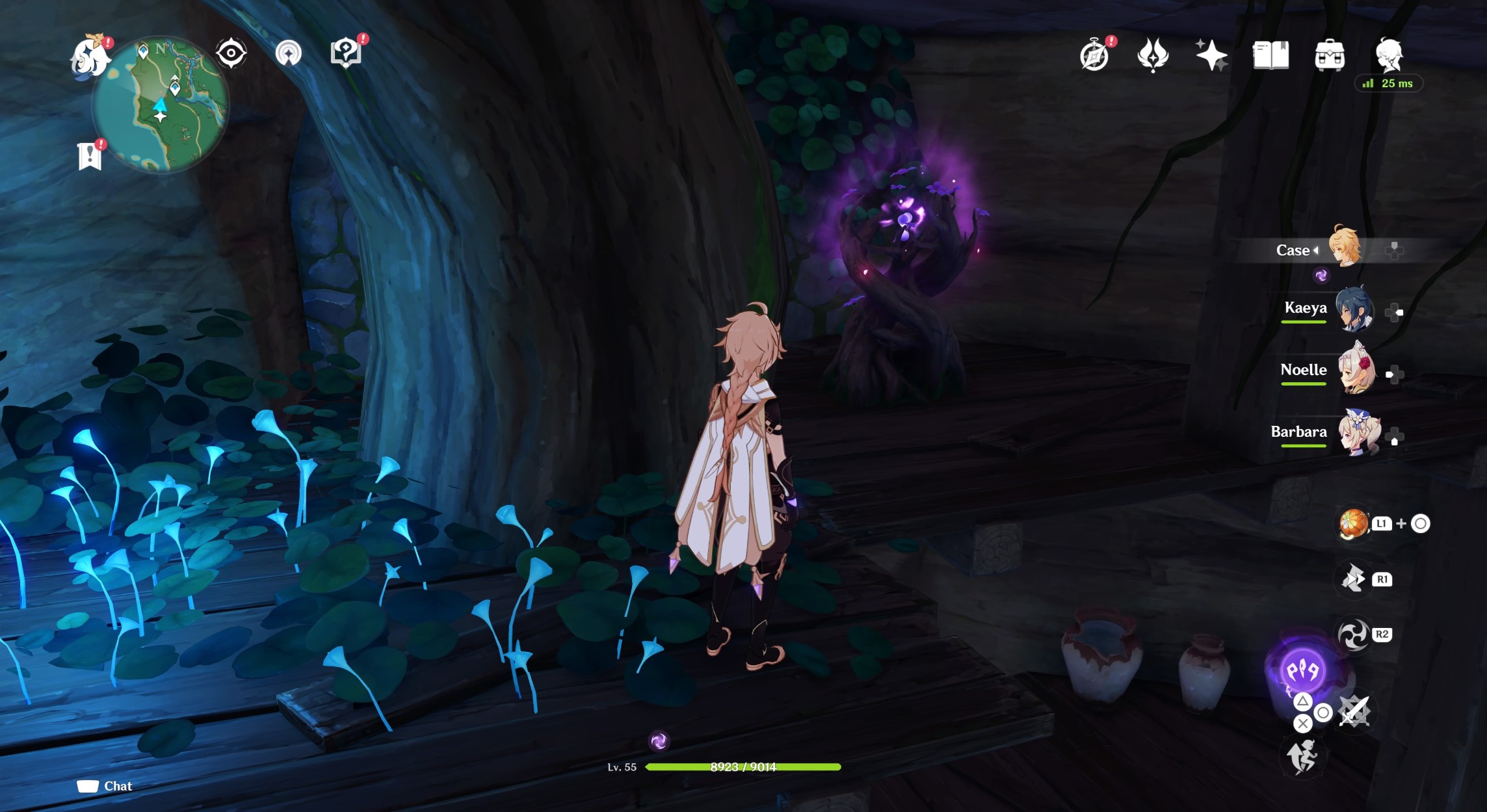 Before you interact with it though, drop down to the bottom. There’s the purple barrier in front of you, then some crates on your right. 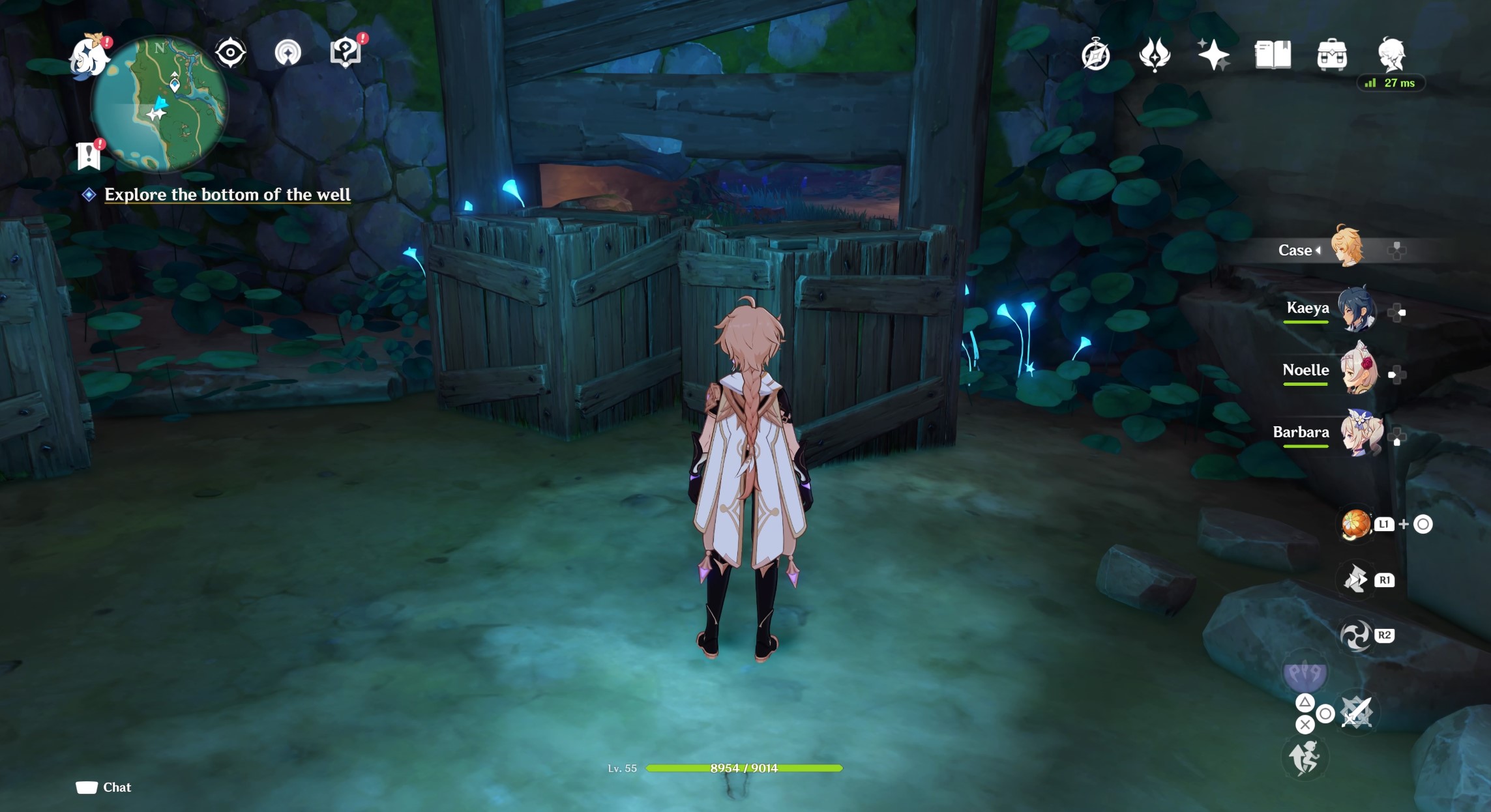 Smash the boxes to uncover a side room with some special items. 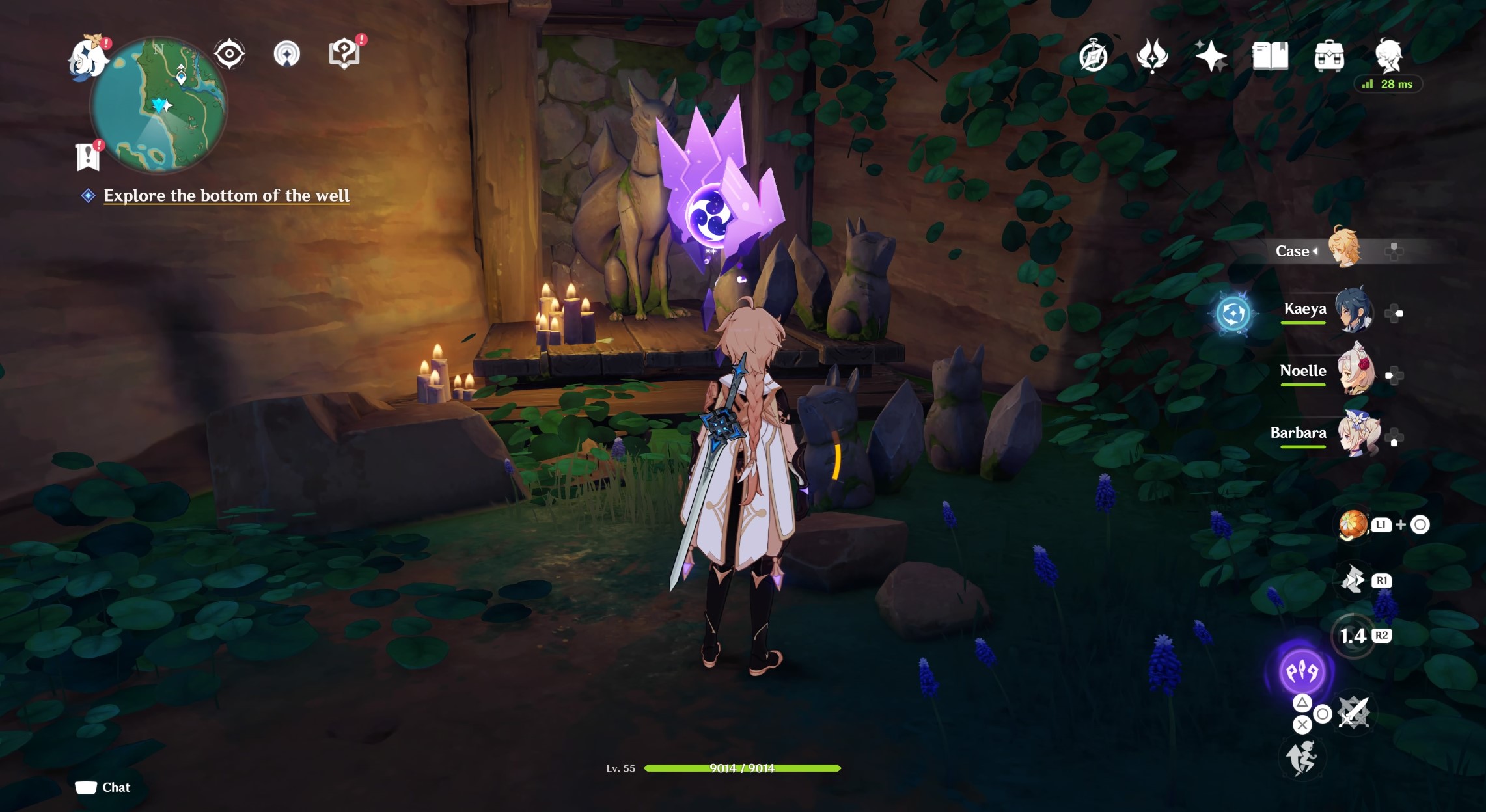 Now return to the top of the previous room and look for the glowing purple roots on the northern side.

Interact with this to summon a little ball of lightning, which will let you glide through the barrier at the bottom of the room. 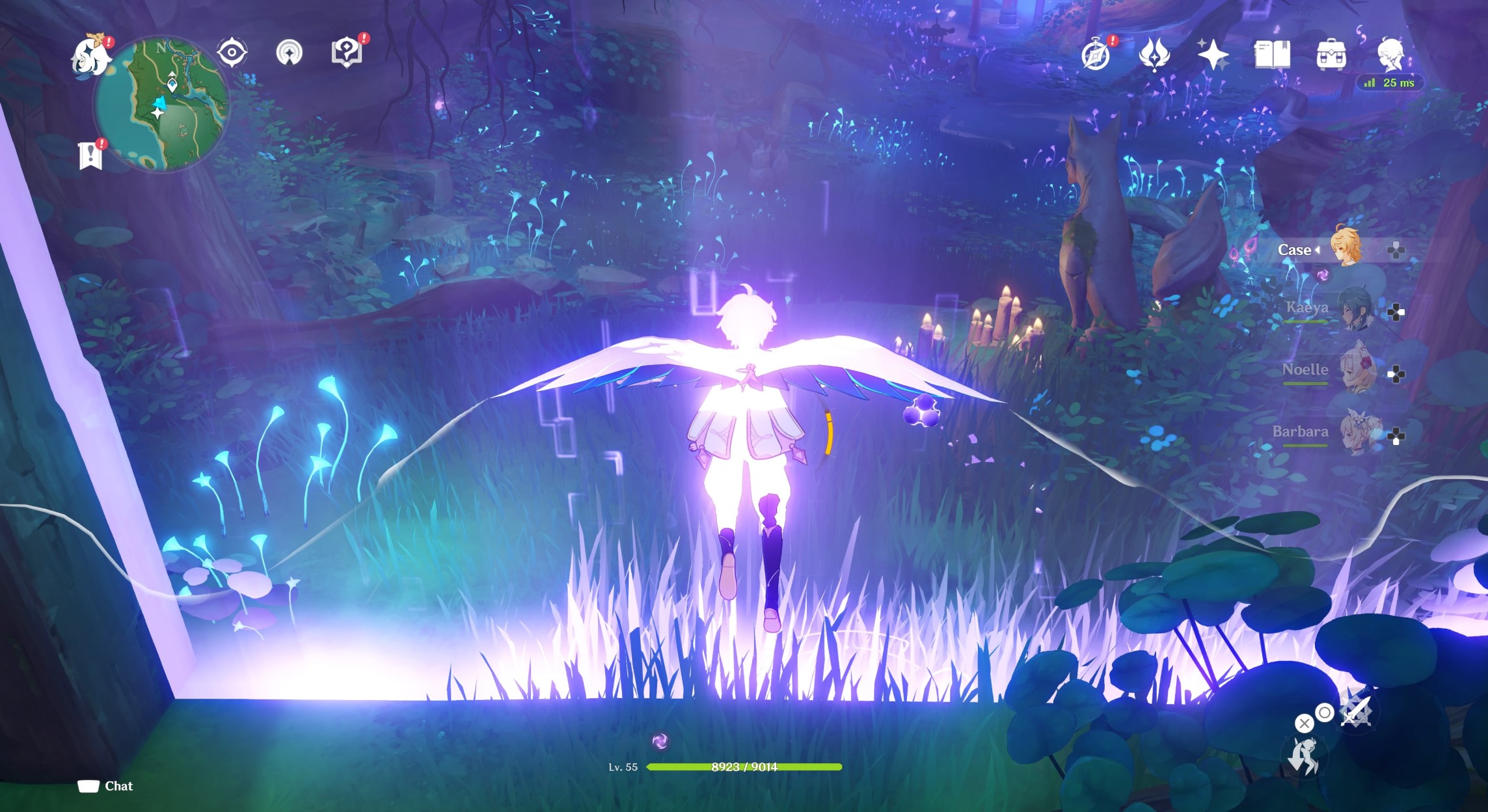 In front of you in this new area at the bottom of the well, you’ll see a puzzle you have to purify. 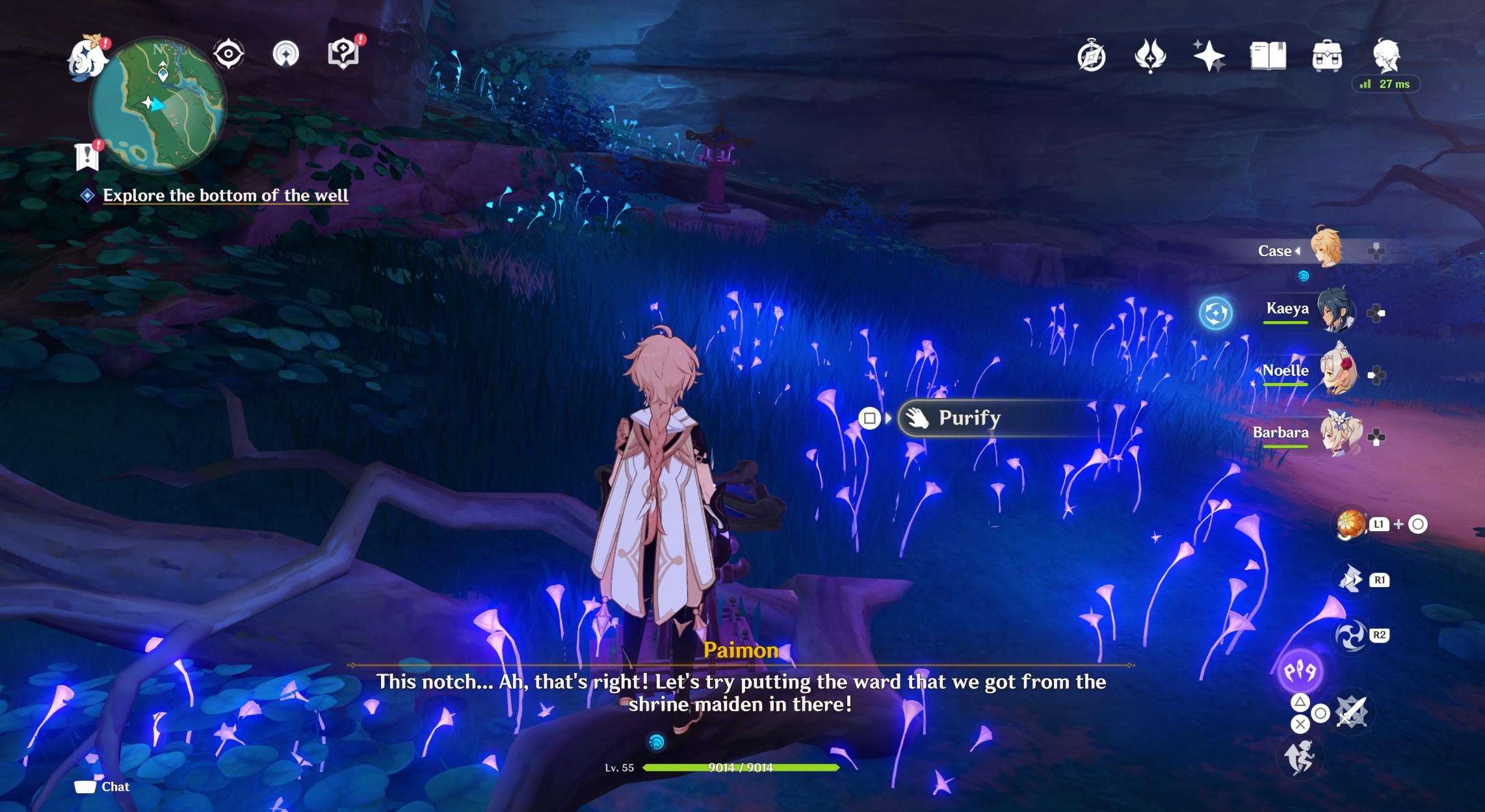 Use the ward you collected at the start of the quest, then look around you.

There are five little towers, each with a symbol representing the numbers 1-5. To solve the puzzle you need to number each tower correctly based on the order shown on the flower in the middle of the room. 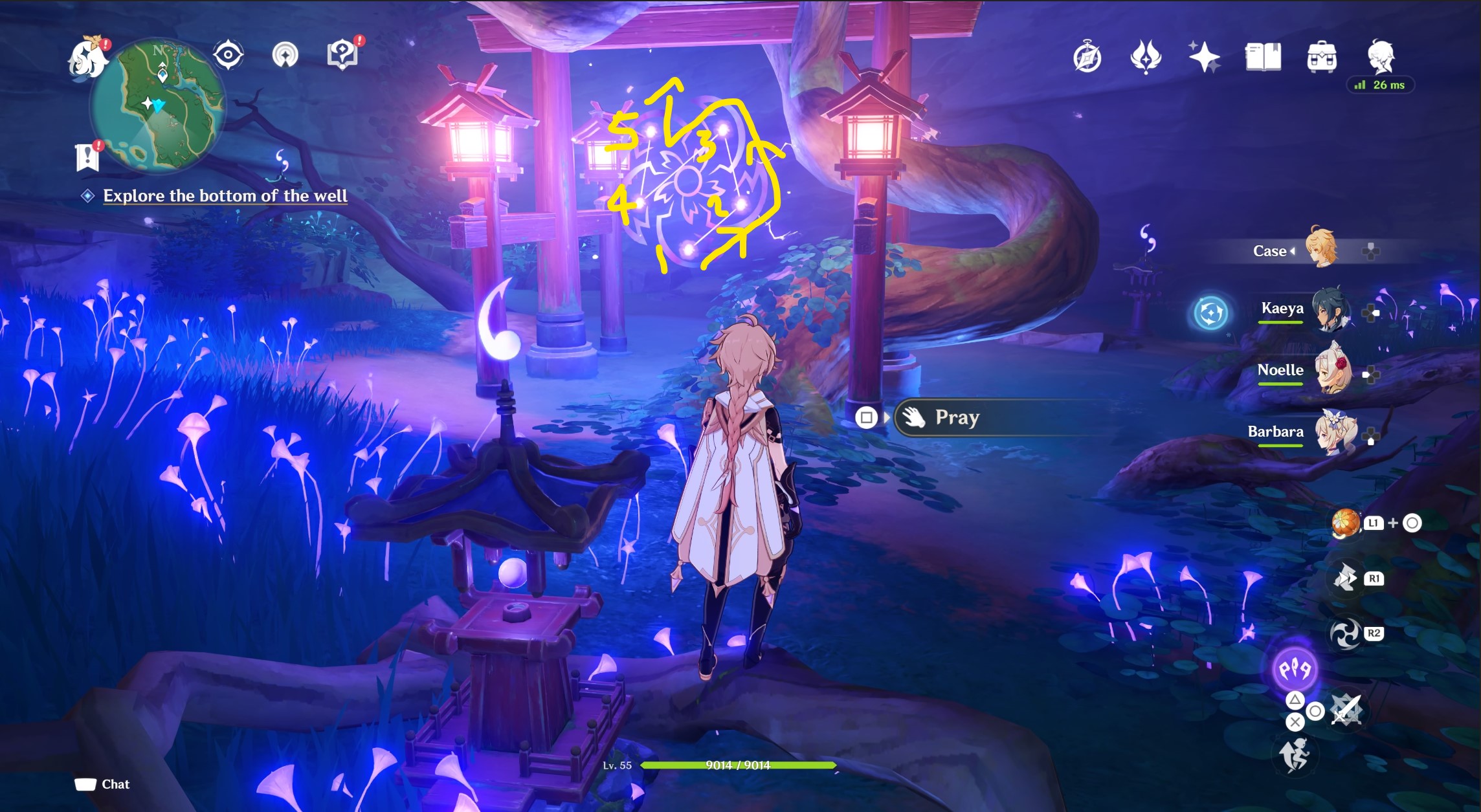 The first tower in front of the flower is already number 1, so keep it that way.

Then the tower to the right of that needs to be number 2. 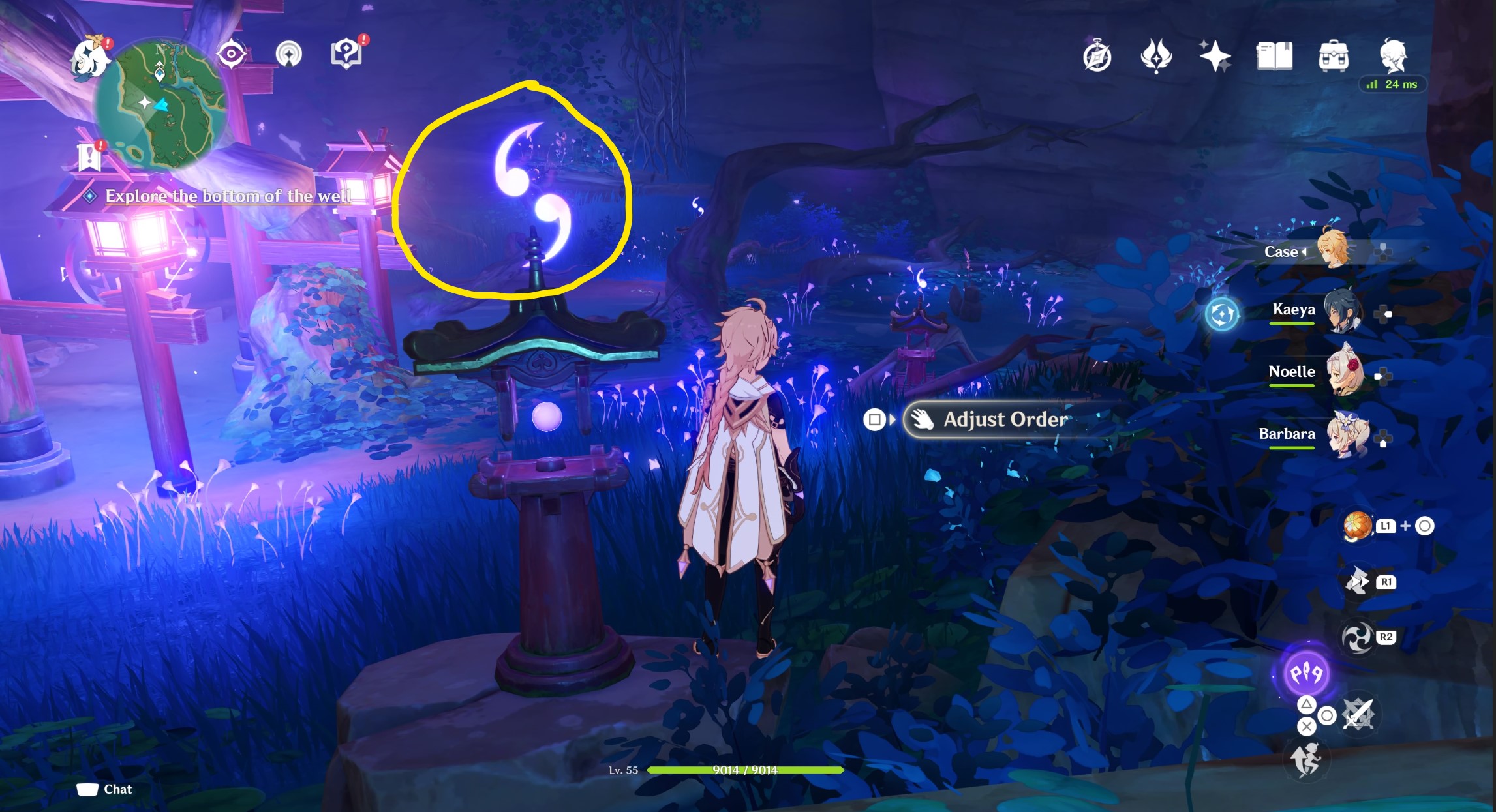 Next, the tower at the back of the room behind the flower needs to be number 3. 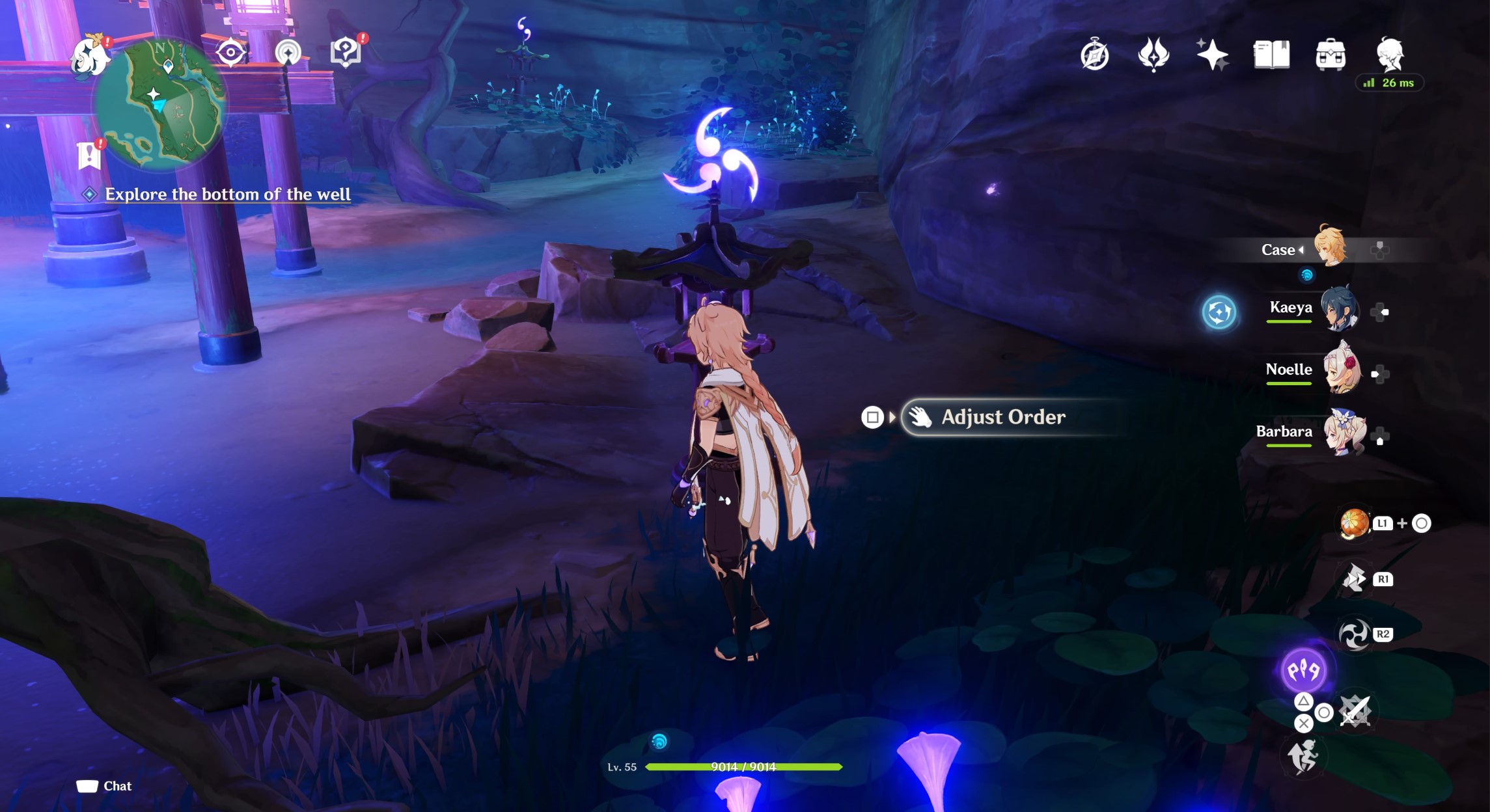 Now, cross the room to the other tower next to number 1, this needs to be number 4. 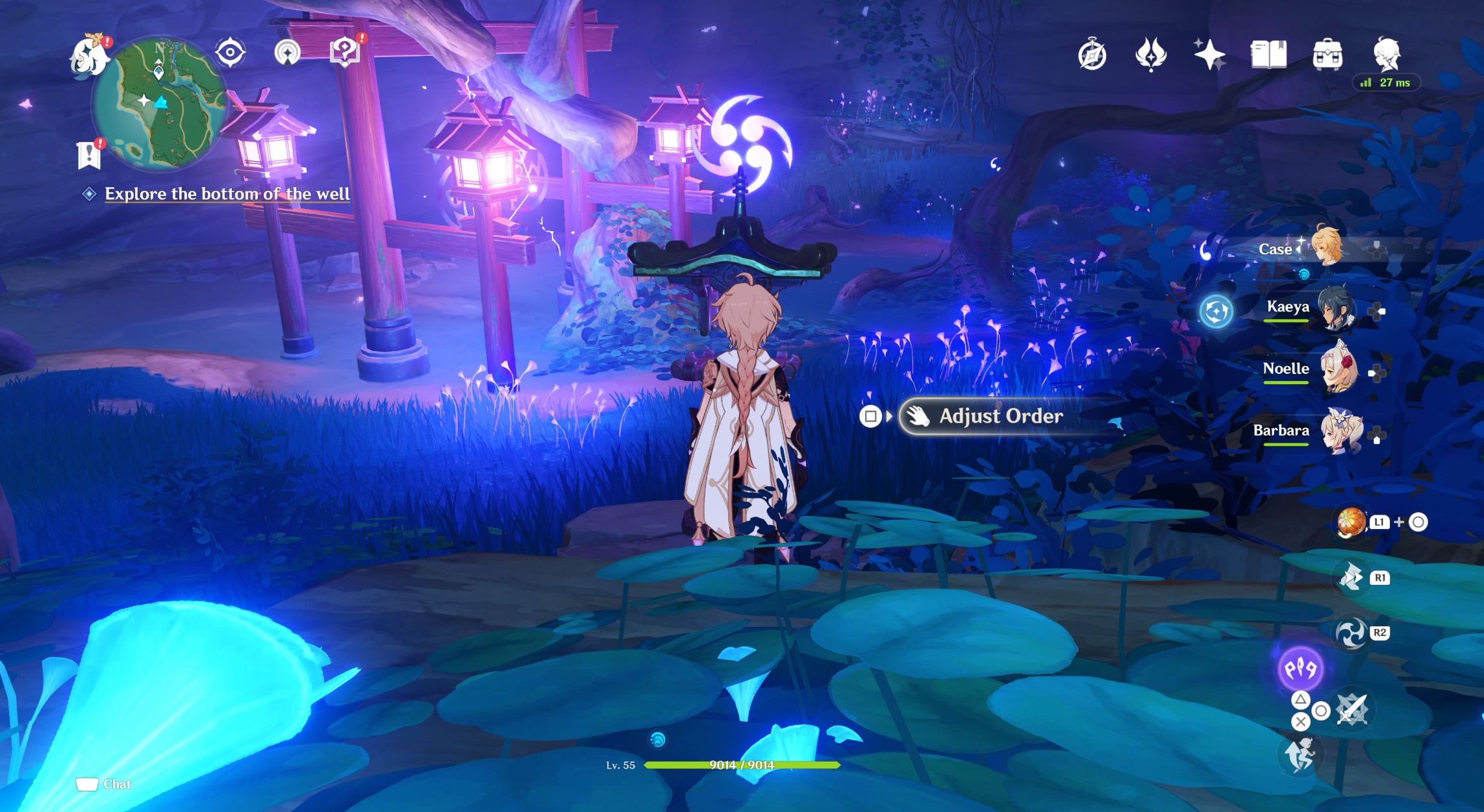 Finally, the tower behind the tree branch in the back of the room needs to be number 5. 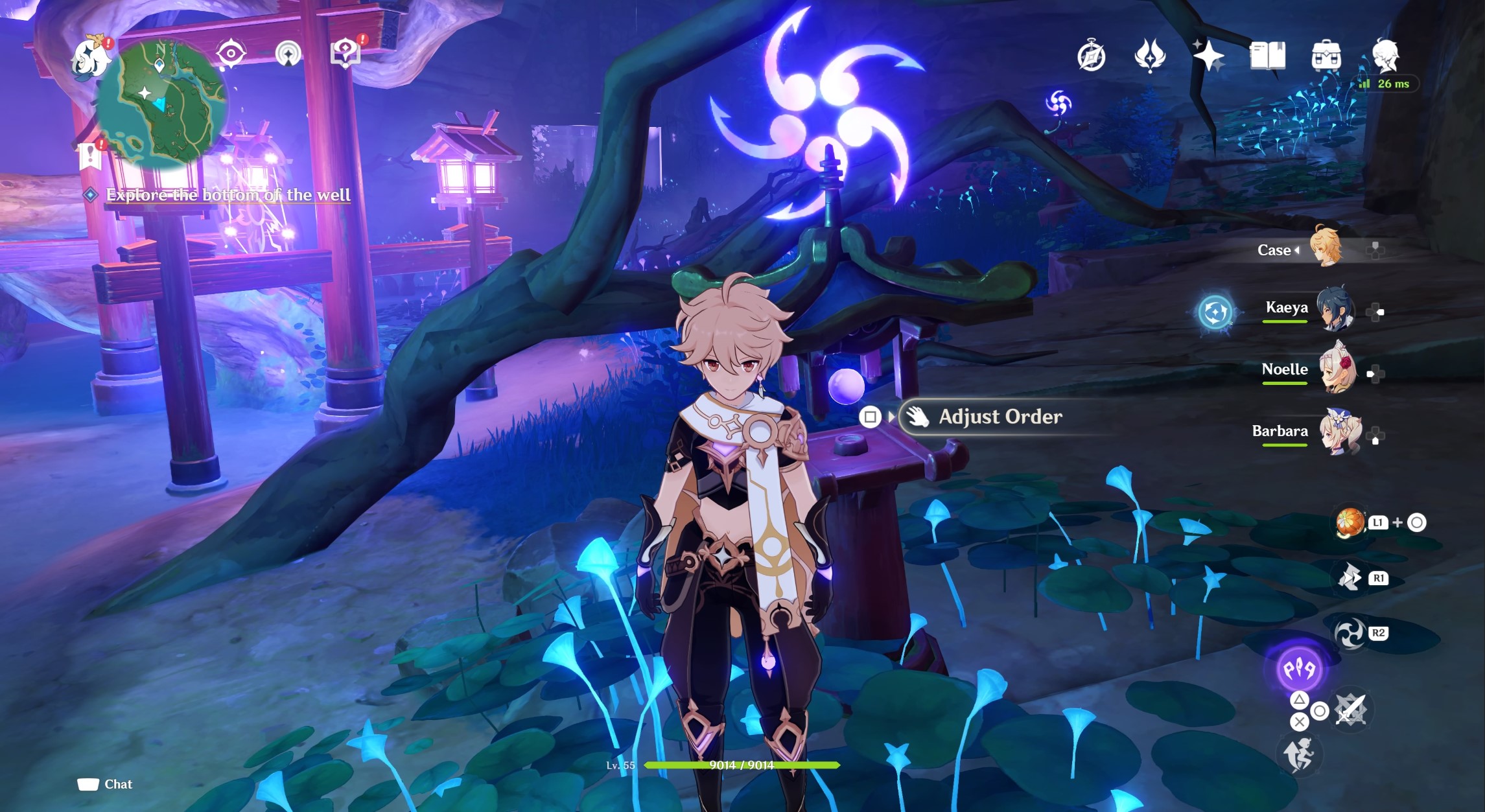 When this is done, get ready for a fight, as you need to defeat the corrupted samurai, Ochimusha, to complete the quest.

They’re pretty easy to beat, and very vulnerable to freezing. 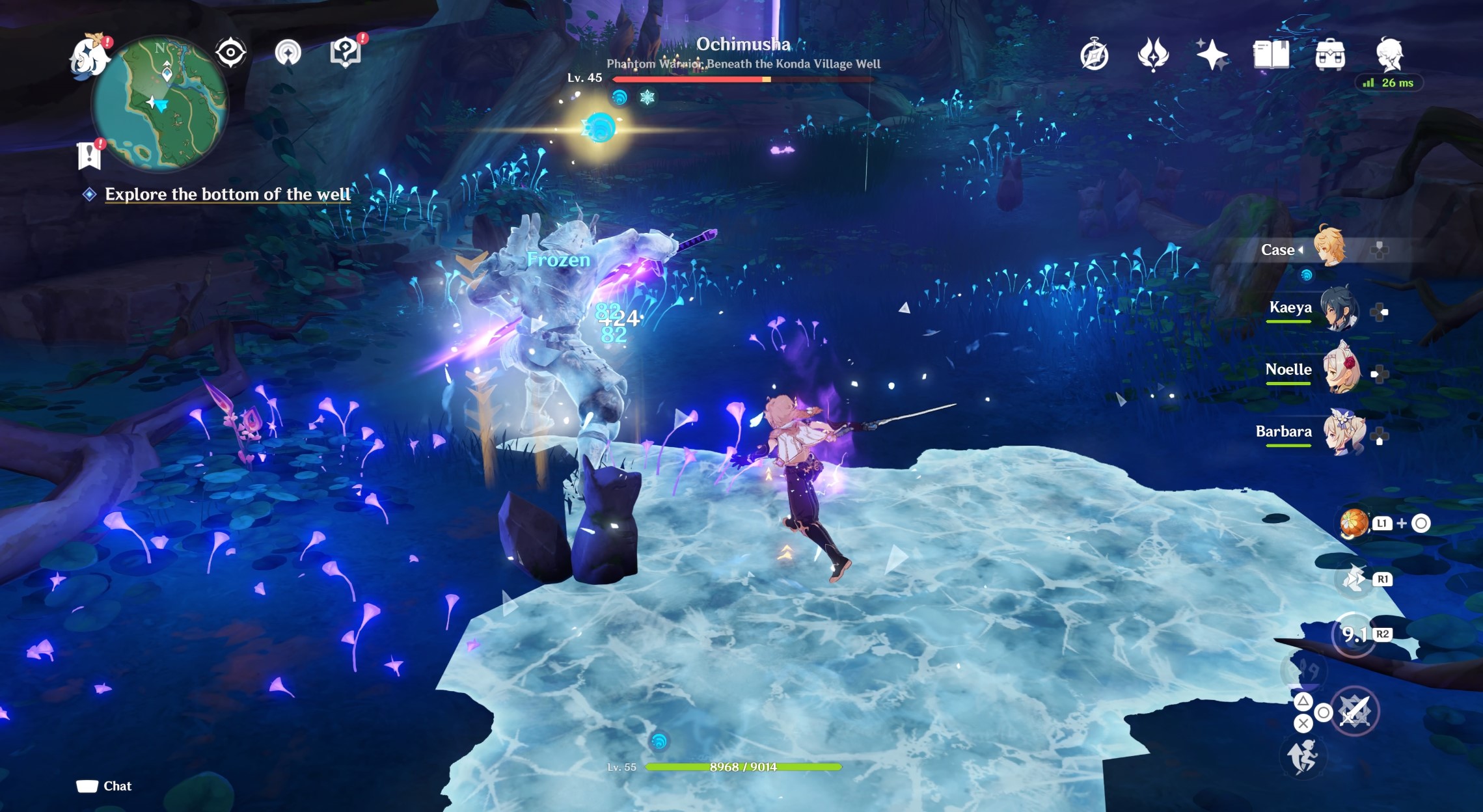 To finish the quest, speak to Kazari again, who will tell you that there are many more barriers which need cleansing around Inazuma. Agree to help and you’ll get another quest, so fast travel out of the bottom of the well to get started! 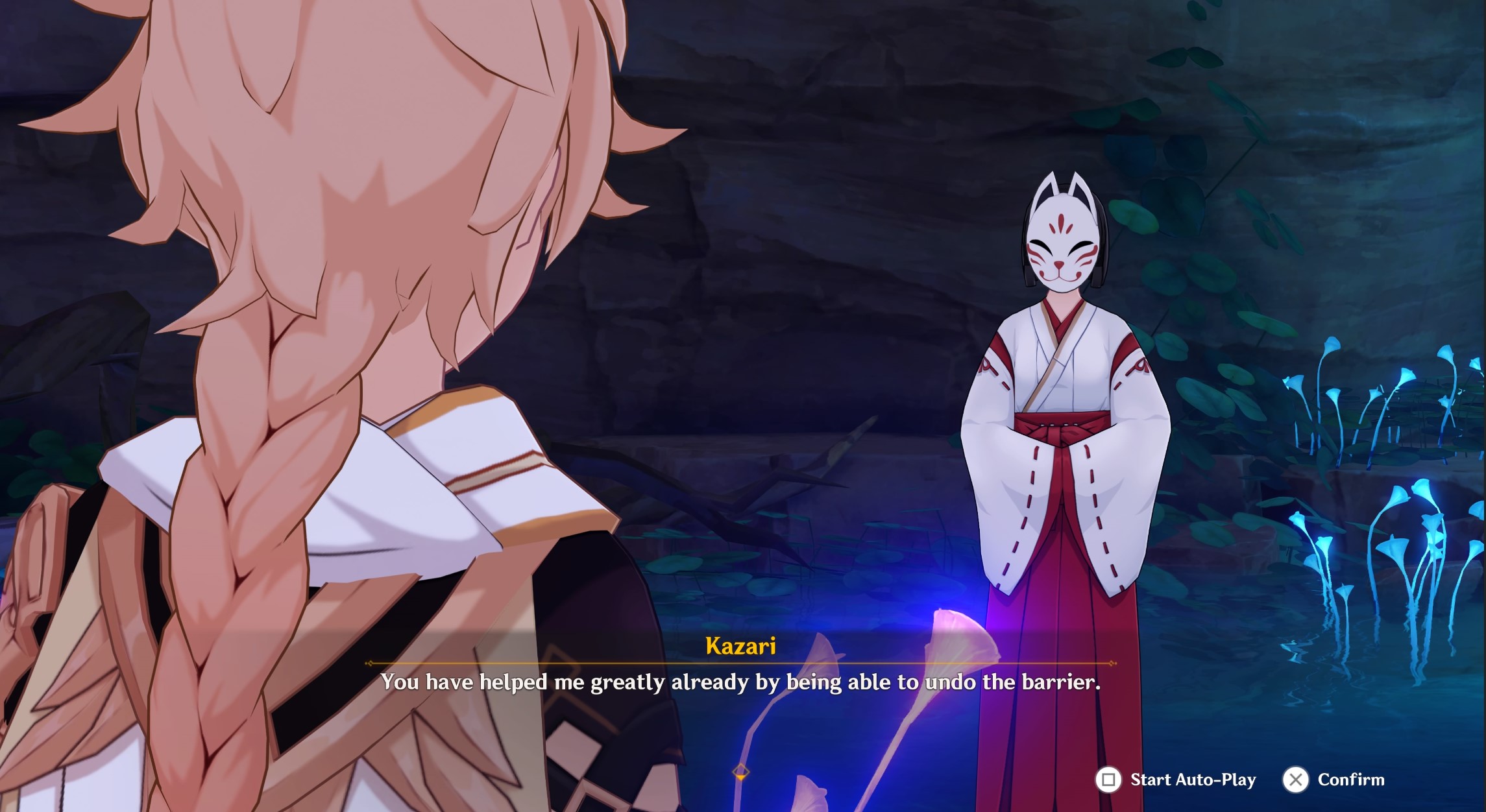 If you’re trying to find your way to the A Flower Blooms in a Prison, here’s where to look.

Or for special Inazuma events, check out our Thunder Sojourn guide.

If it’s new characters you’re after, here are our rundowns of Yoimiya, Sayu, and Kamisato Ayaka.