You may have heard about Space Jam: A New Legacy, a new film acting as a sequel to the classic basketball/Looney Tunes crossover, but did you know there’s also a tie-in game coming, too?

Space Jam: A New Legacy – The Game will be a companion title to the new film, which is simply called Space Jam 2 by many fans, and today Microsoft has announced that the upcoming game will launch exclusively as part of its Xbox Game Pass Ultimate Perks program on July 1. Xbox Game Pass Ultimate Perks are free benefits that make in-game add-ons, consumables, partner offers, and more available to Ultimate members. You may remember the Disney+ free trial that was included as part of the scheme recently.

Following its arrival via the program, the platform holder has said that the game will become “more widely available” as of July 15 ahead of the film’s release in theaters and on HBO Max on July 16.

We know that it’ll go free to play on Xbox as of July 15, but whether that means it’ll come to other consoles in the future remains to be seen.

As you can see in the trailer below, the game leans on the retro inspiration of the property and feels very much like a beat-em-up reminiscent of the 90s-era of arcade gaming. Battletoads fans, Streets of Rage stans, and so on, eat your heart out.

“Space Jam: A New Legacy – The Game features the beloved Looney Tunes characters Bugs Bunny and Lola Bunny and the newest member of the Tune Squad, LeBron James, as they face the Goon Squad in a wacky basketball beat ‘em up,” reads a press release on the Xbox Wire.

“A rogue artificial intelligence named Al G. Rhythm has trapped our heroes inside the Warner Bros. server, with little chance of escape. The Tune Squad must fight their way through a virtual army of Al G.’s creation while also searching for four pieces of “Legacy Code” that will allow them access to the nefarious villain’s secret location.”

Three special edition controllers have also been added to the Xbox Store to commemorate the game’s arrival first on Xbox: 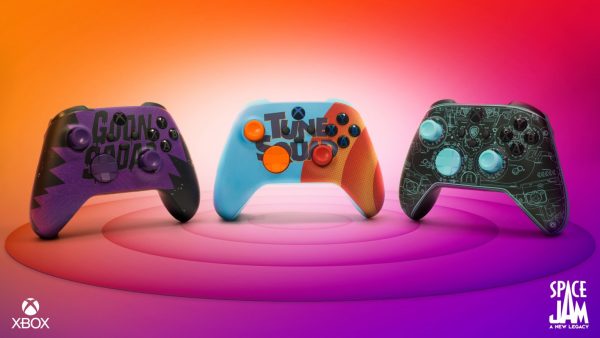