Nintendo has revealed a The Legend of Zelda Game & Watch during its E3 2021 Nintendo Direct showcase today. The handheld console will launch on November 12.

For the 35th anniversary of The Legend of Zelda, Nintendo has announced it will be releasing a Zelda-themed green and gold Game & Watch. The handheld console – a throwback to other Nintendo classic hardware in line with other recent Nintendo projects – will ship with four playable built-in games.

The first entry in The Legend of Zelda series, its sequel (Zelda II: The Adventure of Link), and The Legend of Zelda: Link’s Awakening will all be playable on the device, whilst the fourth game is the Game & Watch Vermin game with the main character replaced with Link.

As you’d expect from the name, the handheld device can be used as a digital clock or timer, and there’s a game built into the clock, too. Obviously. 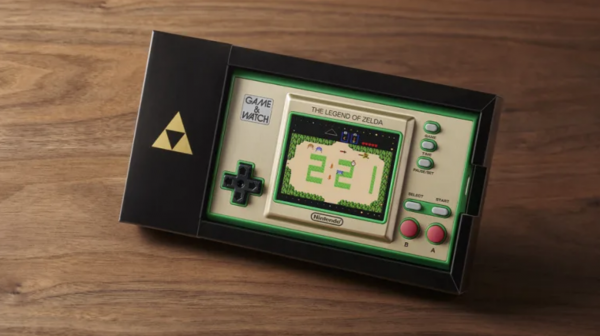 You can play the English or Japanese versions when the device launches on November 12. Can’t wait? Zelda Game & Watch pre-orders are now available at select retailers.