While it’s still early days for Monster Hunter Rise, tweaking the min-max of your build affects the survivability and amount of damage you do to certain monsters. This involves mixing together the best armor sets, utilizing a select few skills, in order to boost up your base attack power.

The Armor and Charms related to the late-game set we discuss is weapon-agnostic, meaning that should you choose to build it for your character, you will see a boost in your damage, regardless of your choice of weapon.

Just note that due to this, you might not be able to use some other skills, unless you have the required gems and gem slots for them. But, before that, you will need to get some useful items to help optimise your damage.

If you’re just getting started with your journey through Monster Hunter Rise, the choice on offer can be perplexing.

These Skills give you powerful passive bonuses, such as an increase in attack power or critical hit chance (Affinity).

However, the main thing to remember is: Don’t hoard your low-rank materials.

They will eventually become obsolete, so don’t worry too much about using up valuable parts you might need later – craft whatever armor you like the look of and experiment with different combinations of Skills throughout the early game.

But, if you’d rather save your collected parts for making different weapons, then the Great Izuchi Set – which is fully craftable from early on in Monster Hunter Rise – is a solid choice that can very easily see you from the start of the game until you first roll the credits. 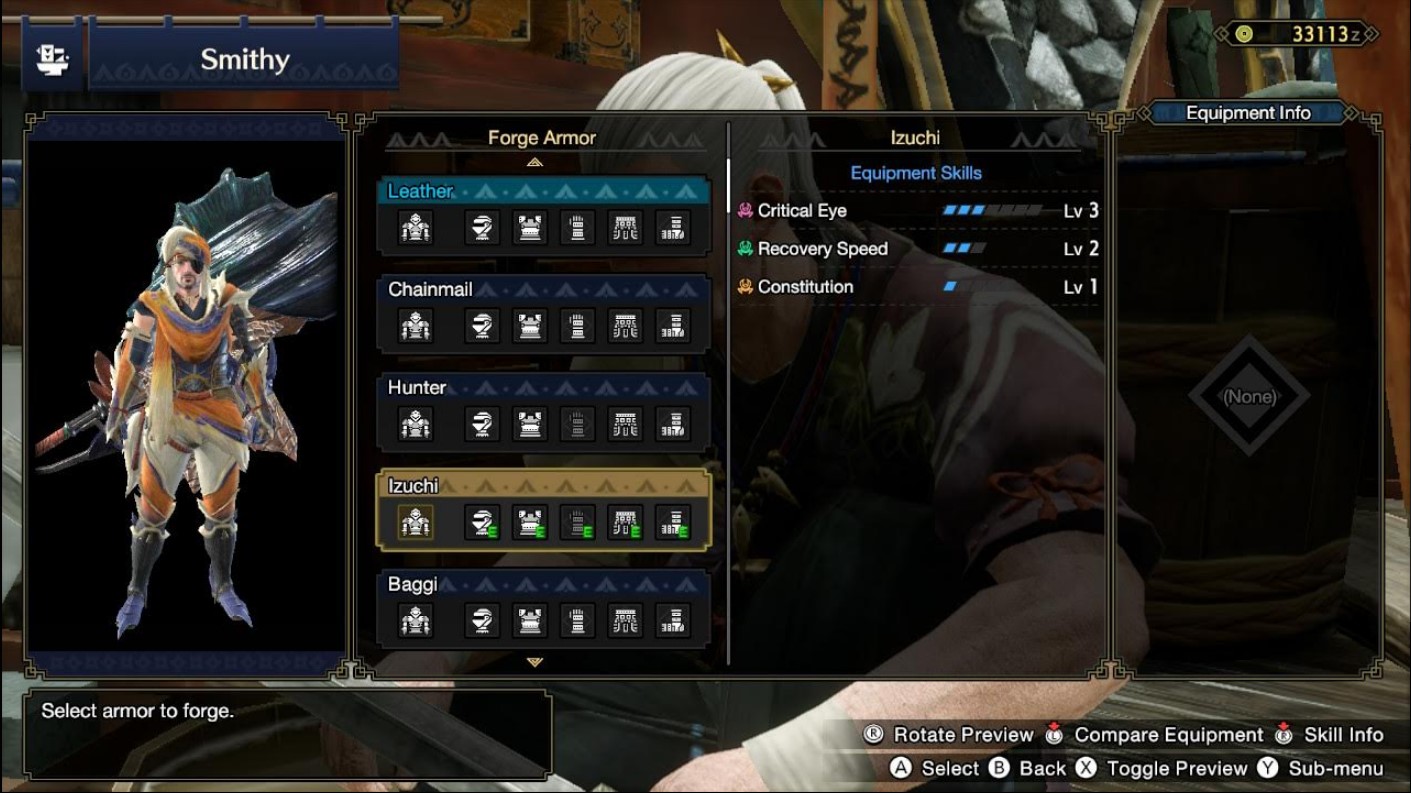 How to get the Powercharm, Power Talon, Armorcharm and Armor Talon in Monster Hunter Rise 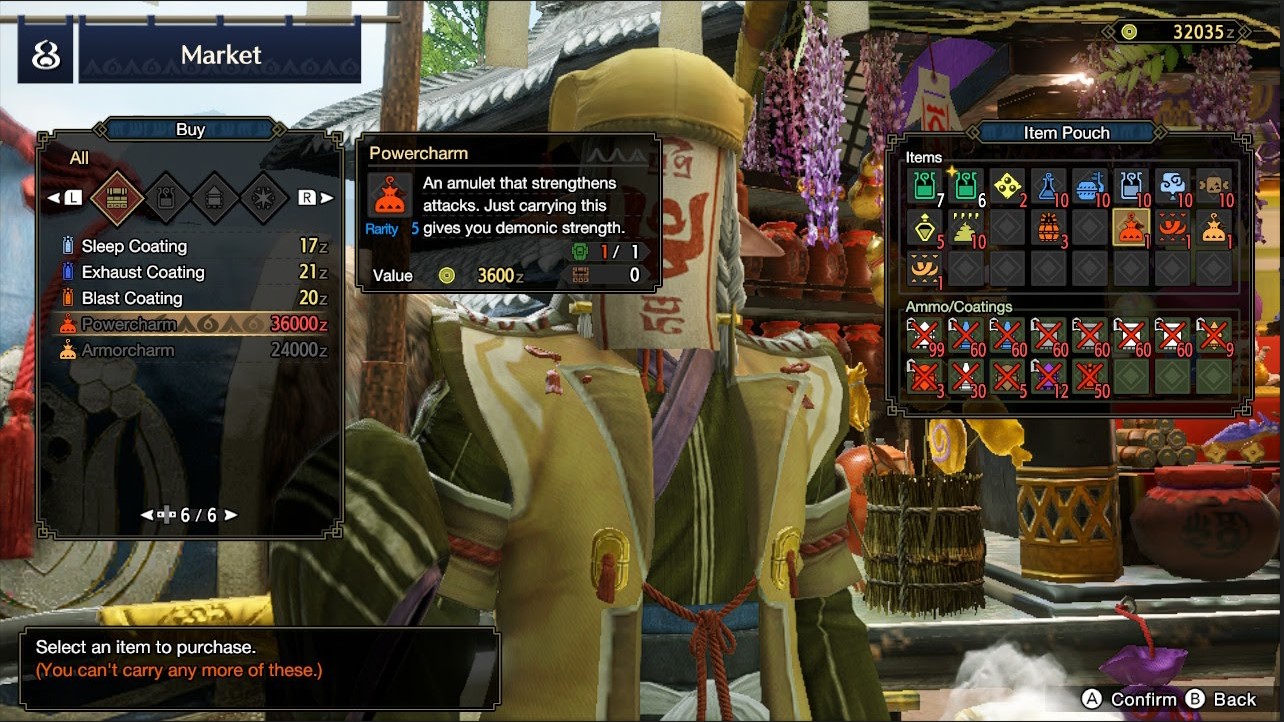 Once you reach the late-game high-rank hunts, you’re going to need a lot better equipment, however.

Those of you familiar with Monster Hunter World will know of the Powercharm, Power Talon, Armorcharm and Armor Talon, all of which should sit in your inventory once crafted for an attack and defence buff.

These are back in Monster Hunter Rise, and after reaching a certain point in the story, they will become available to you.

The Powercharm and Armorcharms are purchasable from Kagero the merchant, costing 36,000 and 24,000 Zenny respectively. You will need to buy two of each, one to keep, and one to craft into the Power Talon and Armor Talon. So, go and grind out some multi-monster hunts for Zenny, if you don’t have it already.

Once you’ve got all of the items, you will need two Ibushi Claw+ to craft them into their more powerful Talon counterparts.

Keep these in your inventory for a noticeable Attack and Defence boost. This is critical to mastering the more difficult hunts, so do this as soon as you possibly can.

Once that’s sorted, go ahead and grind out more money. The armor is going to be pretty expensive too. 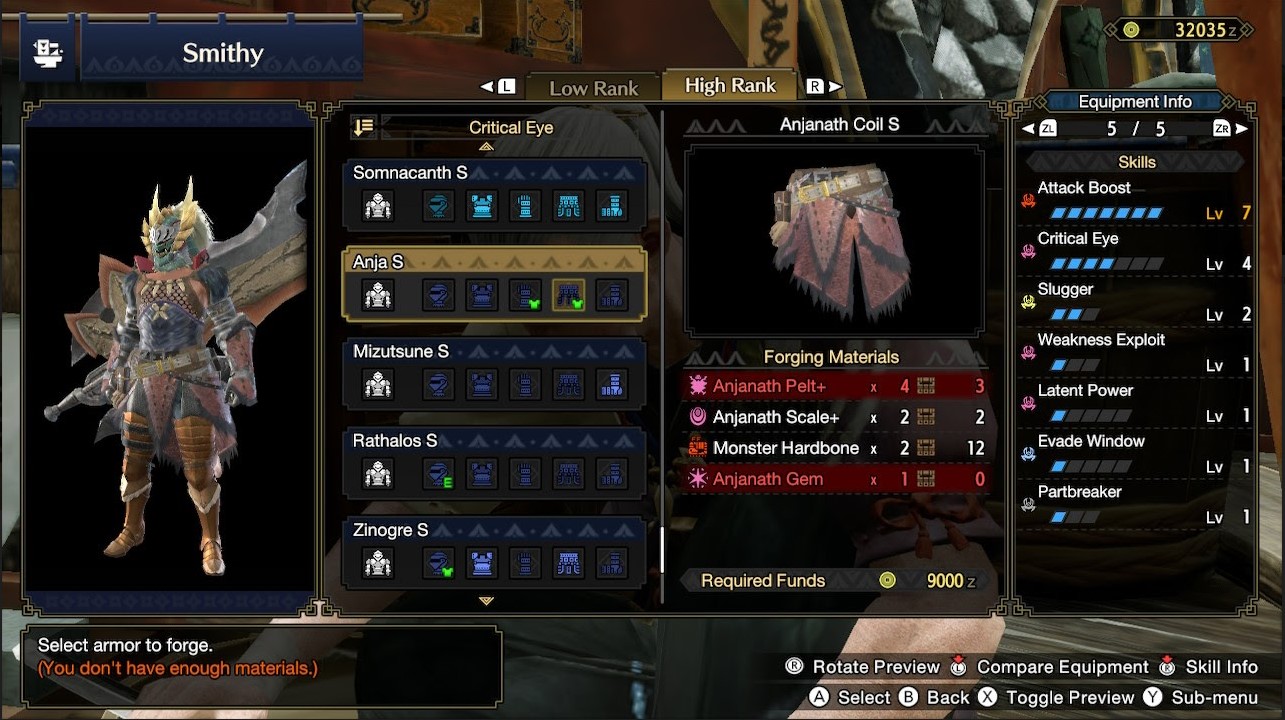 Since we want this set to be accessible for when you hit a difficulty spike in the high-rank Hub quests, this entire set is craftable once you hit the six-star high rank hub quests, as the seven-star quests are significantly more difficult than the previous tier.

The skills we’re focussing on in this armor set are:

Attack Boost, as this provides a base boost to your attack, like the skill says. Critical Eye, which increases your Affinity, or the amount of times you dish out critical hits, and Weakness Exploit, which further increases your affinity when attacking weak spots.

This set isn’t an easy one to craft and upgrade. However, it will result in having a very good armor set, and decent skills to see you through the harder high rank hunts, and Apex monsters.

In total this set with no extra decorations, should leave you with the following skills:

This will impact your attack in the following ways:

This might not be the most optimal setup for your particular weapon, but we guarantee it will kick out a significant amount of damage. Just be sure to upgrade the relatively low rarity Ingot Greaves in order to bring it up to the level of the rest of the armor.

If you’re still having trouble with the elemental resistances with this set, eat for defense up against the element that your target monster will be using.

Again, this is an incredibly versatile set that we’ve intentionally left a little bit blank in terms of decorations, as none of the skills (Attack Boost, Critical Eye, or Weakness Exploit) are craftable from the Smithy at the time of writing.

This means that you can still slot in alternative decorations to further enhance your playstyle, and damage uptime with your weapon of choice.

Bolstered by the power of the Powercharm, Armorcharm, Power Talon and Armor Talon we crafted previously, this set should be able to see you through all of the challenges the game will throw at you, and is craftable before you hit some of the harder hunts in the seven-star high rank hub quests.

Let us know if you craft this set, and how you get on with the rest of Monster Hunter: Rise. Happy hunting!