I’m all for maintaining spooky atmosphere and creeping chills, but it’s more than likely that at some point in Tarsier Studios’ sinister sequel, you’re going to need a Little Nightmares 2 Walkthrough.

Your adventure begins in a dark, gloomy, and foreboding forest. Your name is Mono, but that’s just about the only thing you know. 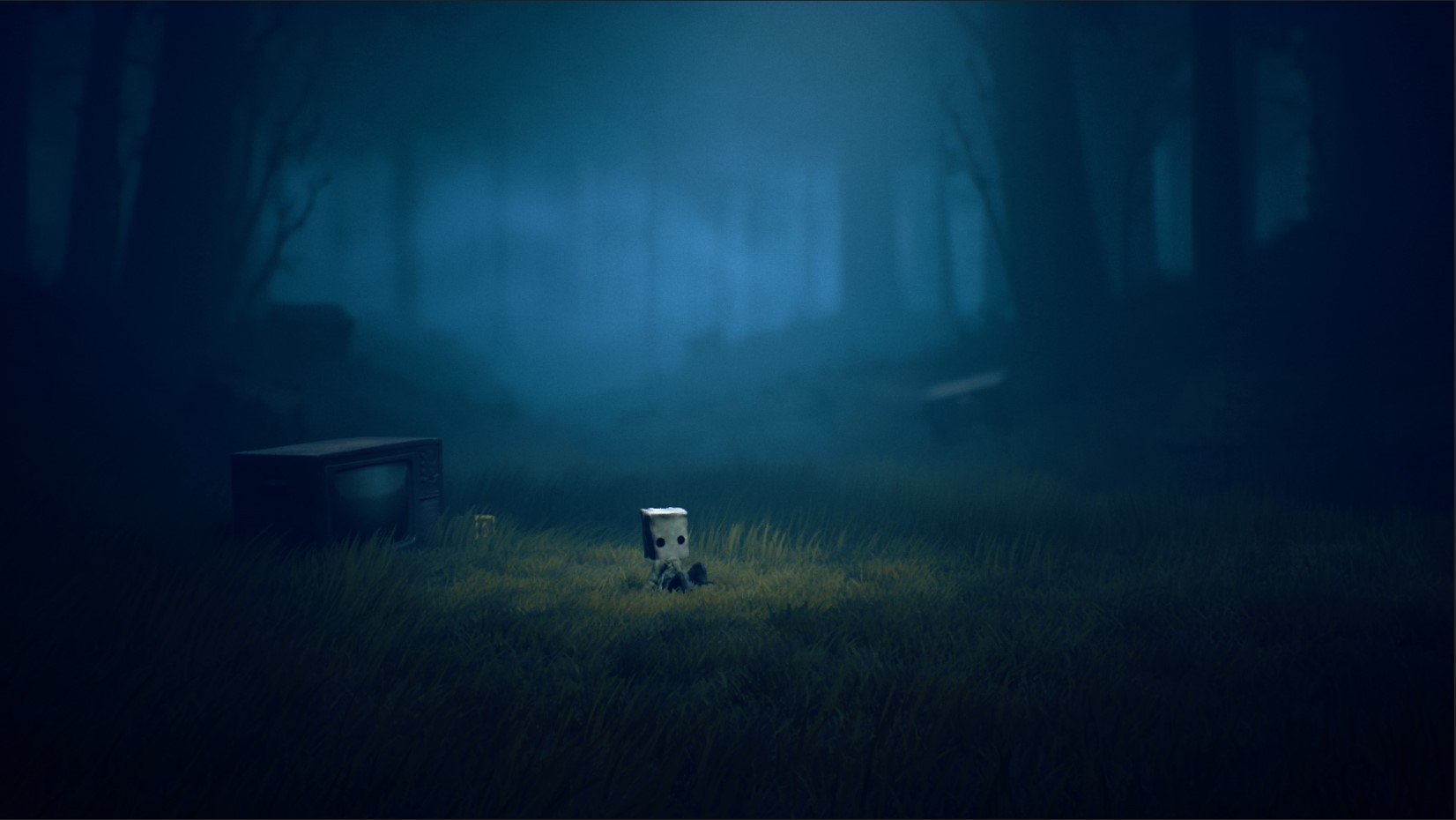 When you gain control at the start of the game, head right, jump over the gap, then pull open the grate to advance – pressing crouch to enter the tunnel. 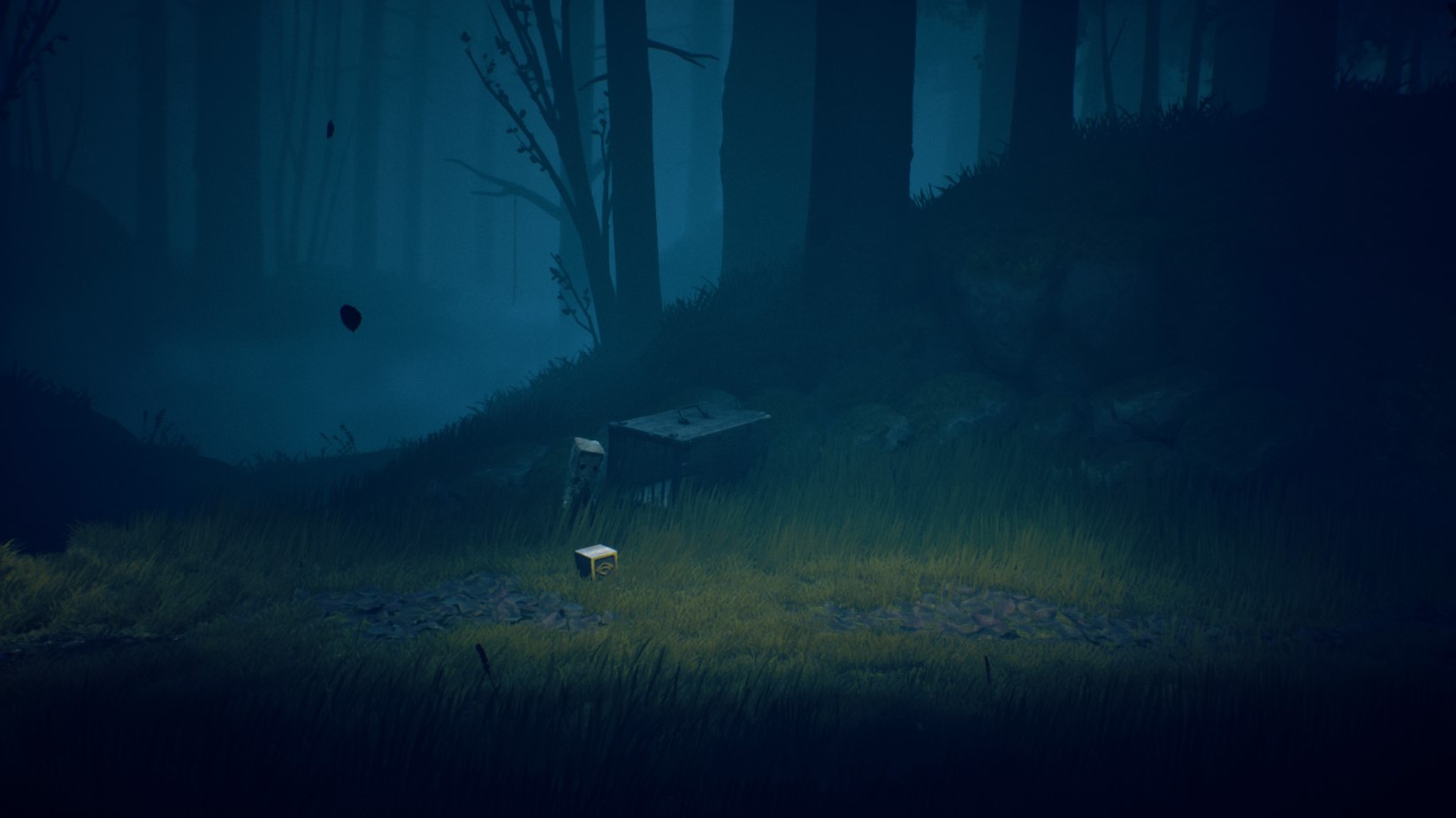 Then proceed to the log on the next screen, jumping across as you did the earlier gap.

On the other side, jump over the tripwire to avoid an early demise, then continue onto the next screen. 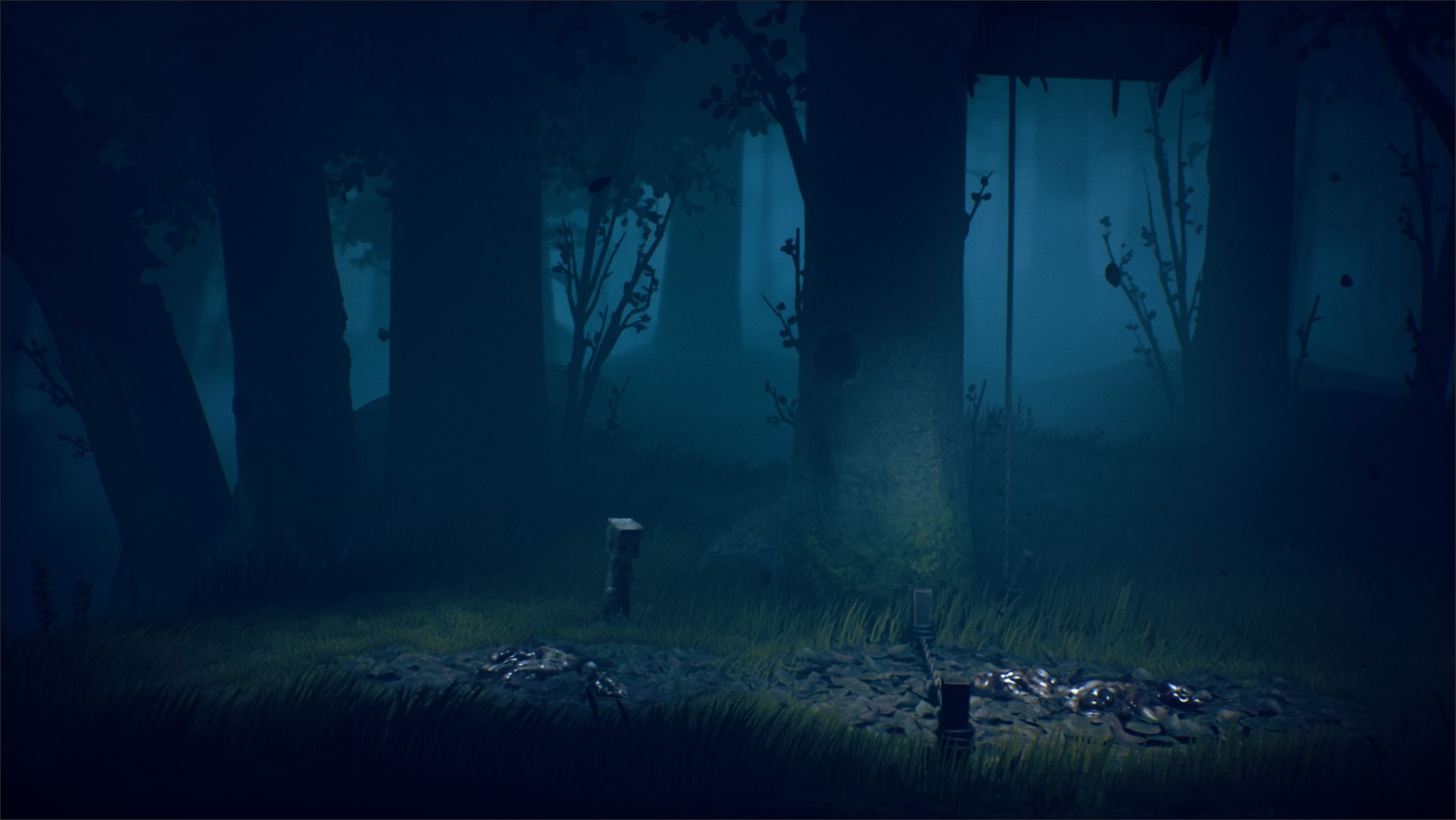 Here’s your first puzzle: knock the teetering box over – either by jumping at it or pulling it – then drag it over to the ledge so you can jump up. 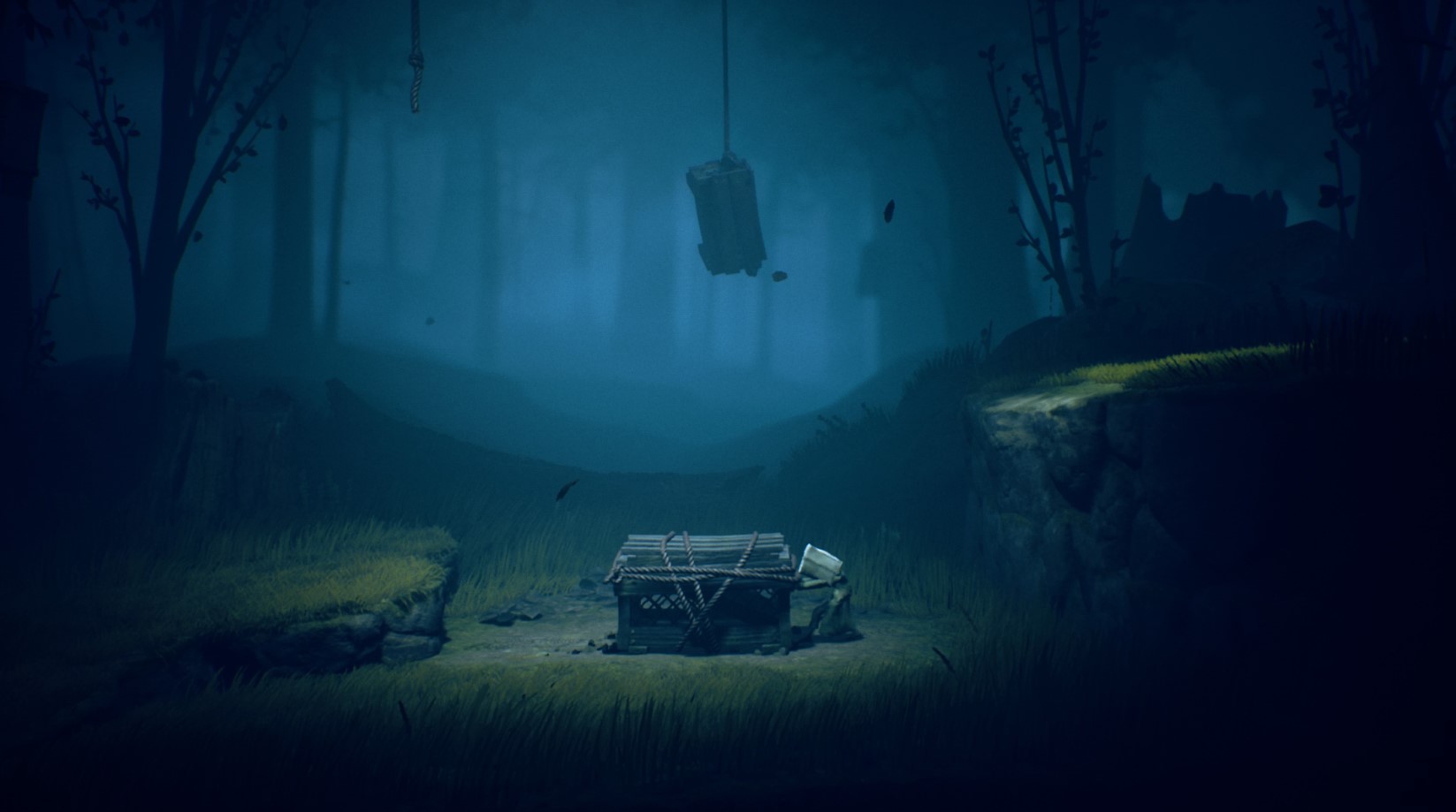 Be ready to sprint down the hill to avoid the log, then you’re at another impasse.

Climb up through the log, then jump and grab onto the noose, using it to swing to the other side.

At the lever, rotate it until the box is as low as it can go, then use it to skip to the other side. 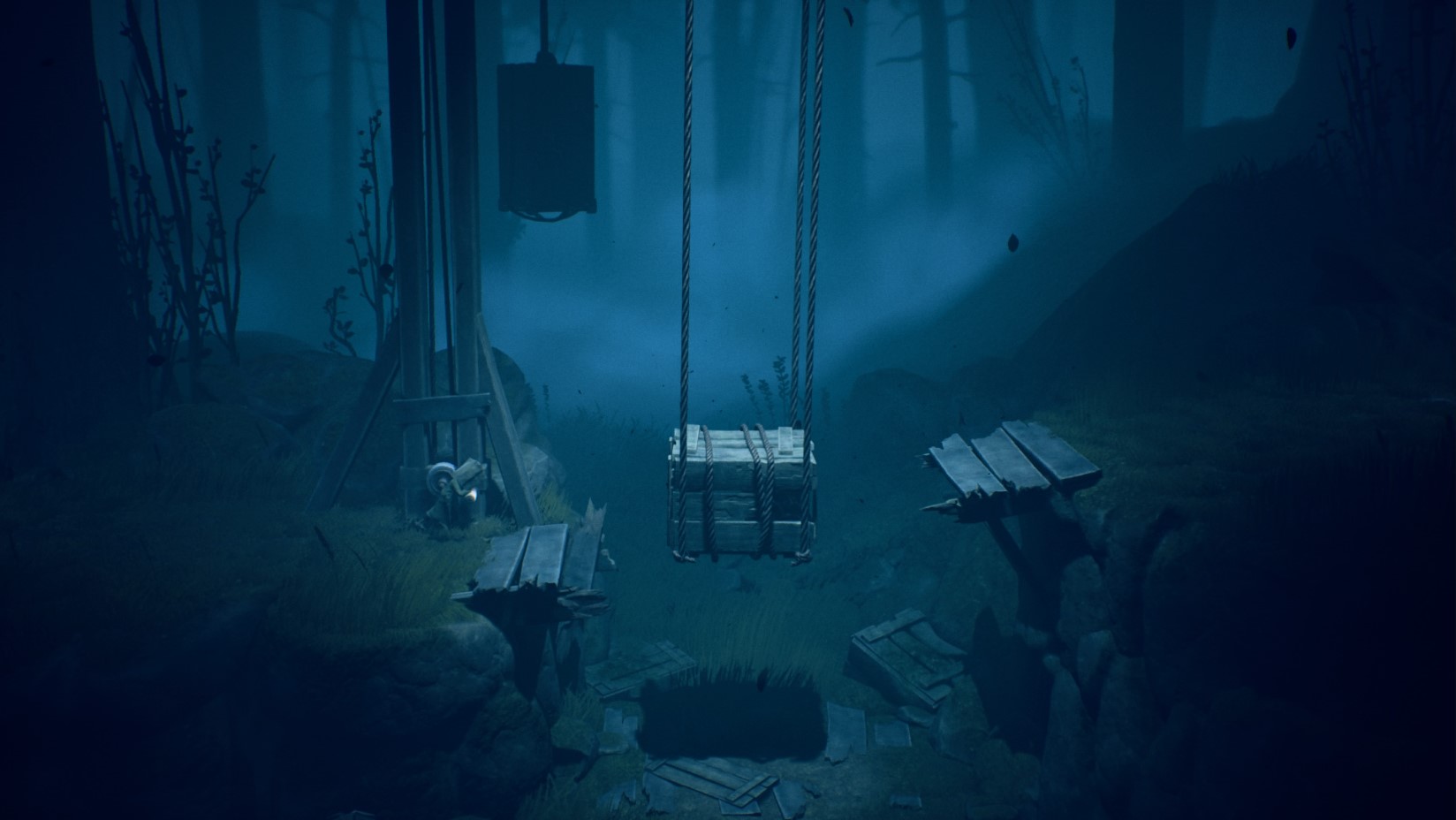 When you reach the long drop, you need to look down and come to the front of the screen. There’s a box you can use to break your fall here before climbing up the other side of the broken bridge. 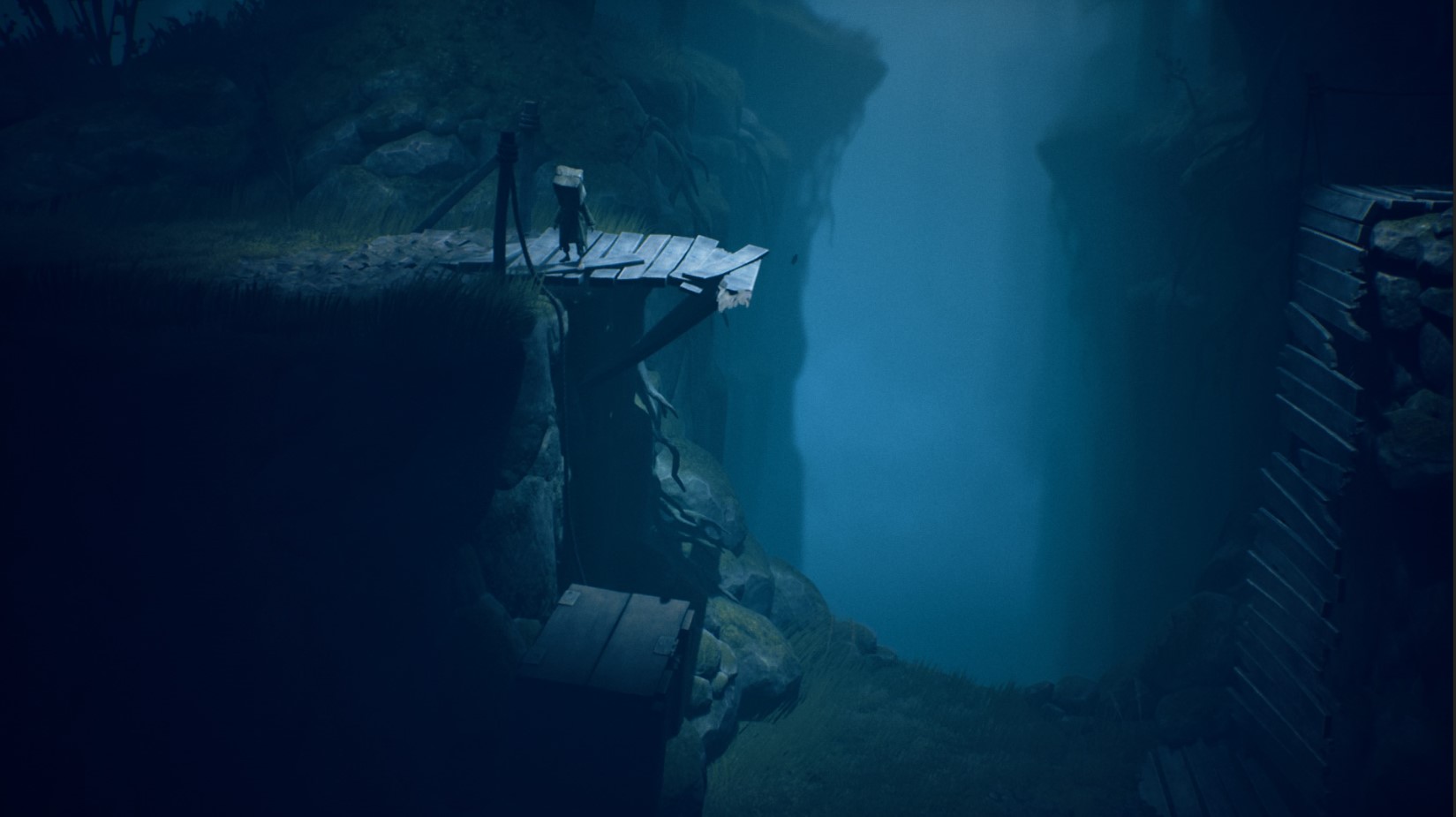 In the next screen where you scare off the crow, just after that there’s another trip snare, which you can trigger with the shoes the bird was picking at. Pick one up, throw it up the small gap with the jump button, then grab and throw in again in the middle of the snare. You can then pass without incident, using the now descended log to jump up to the next area. 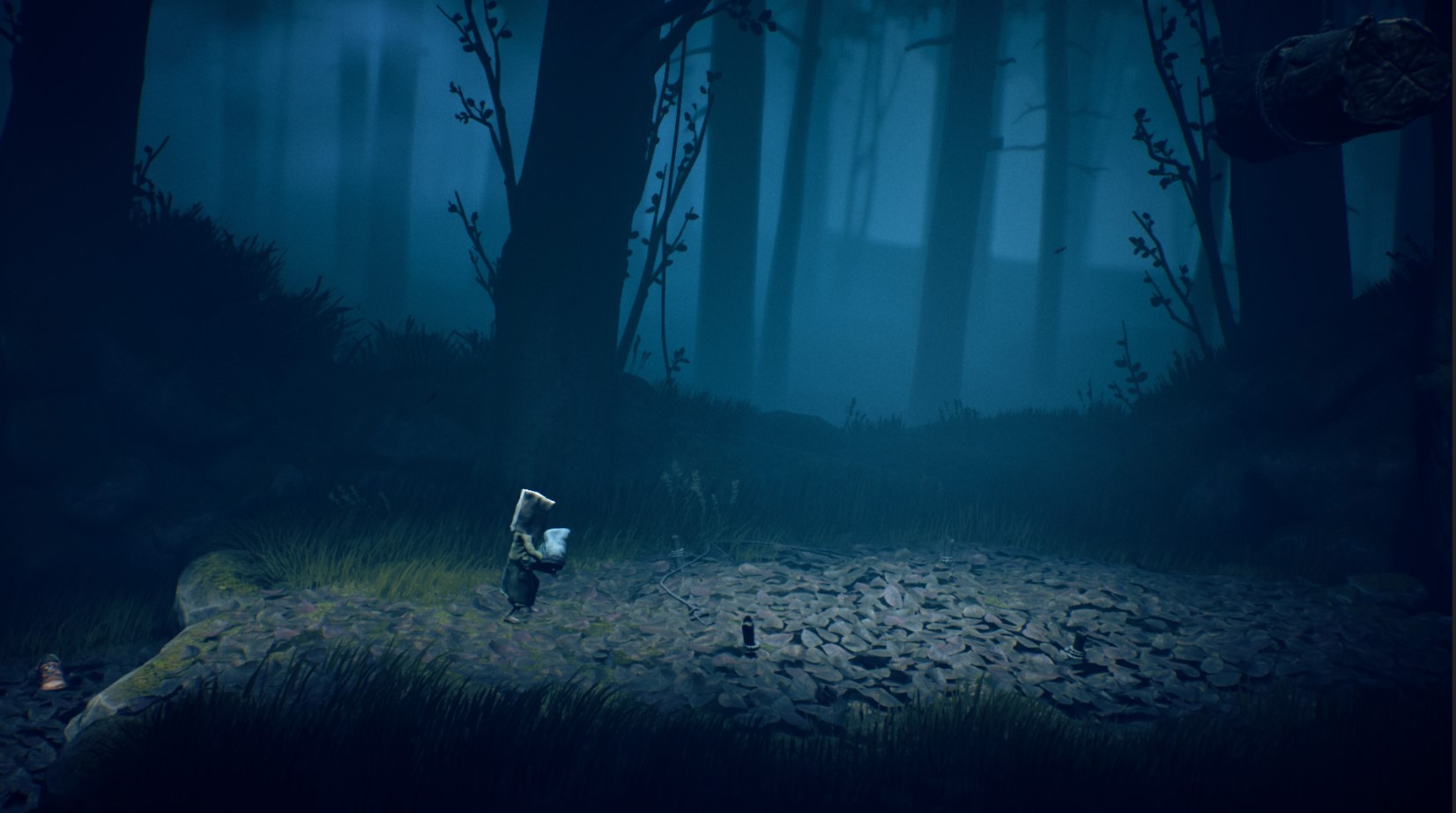 After that, take care to avoid the bear traps on the ground, using the illuminated stick to break the last one to slip through the log.

At the bottom, there are a lot of hidden bear traps in the fallen leaves. Pick up the twig beside you, then use it to feel a way to the safe raised stone. 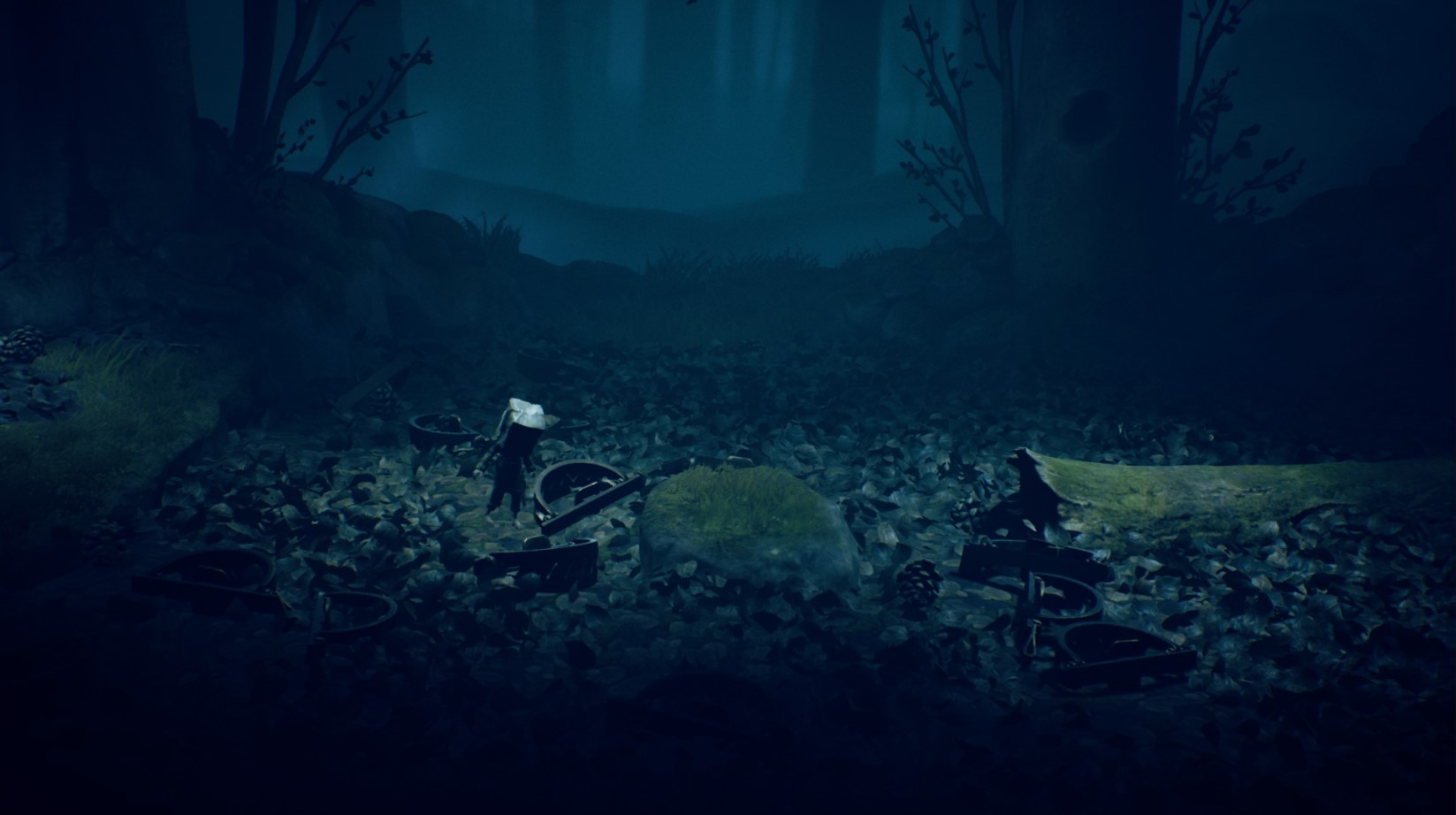 Jump to where the pine cones are, then throw a pine cone into the next pile of leaves to trip another slew of bear traps.

Now jump to the next stone, but grab another pine cone to trip the traps between the stone and the log. Jump on top of the log, then sprint, jump and grab onto the ladder.

In the next clearing, approach and investigate what you find. Use the box by the window to enter. 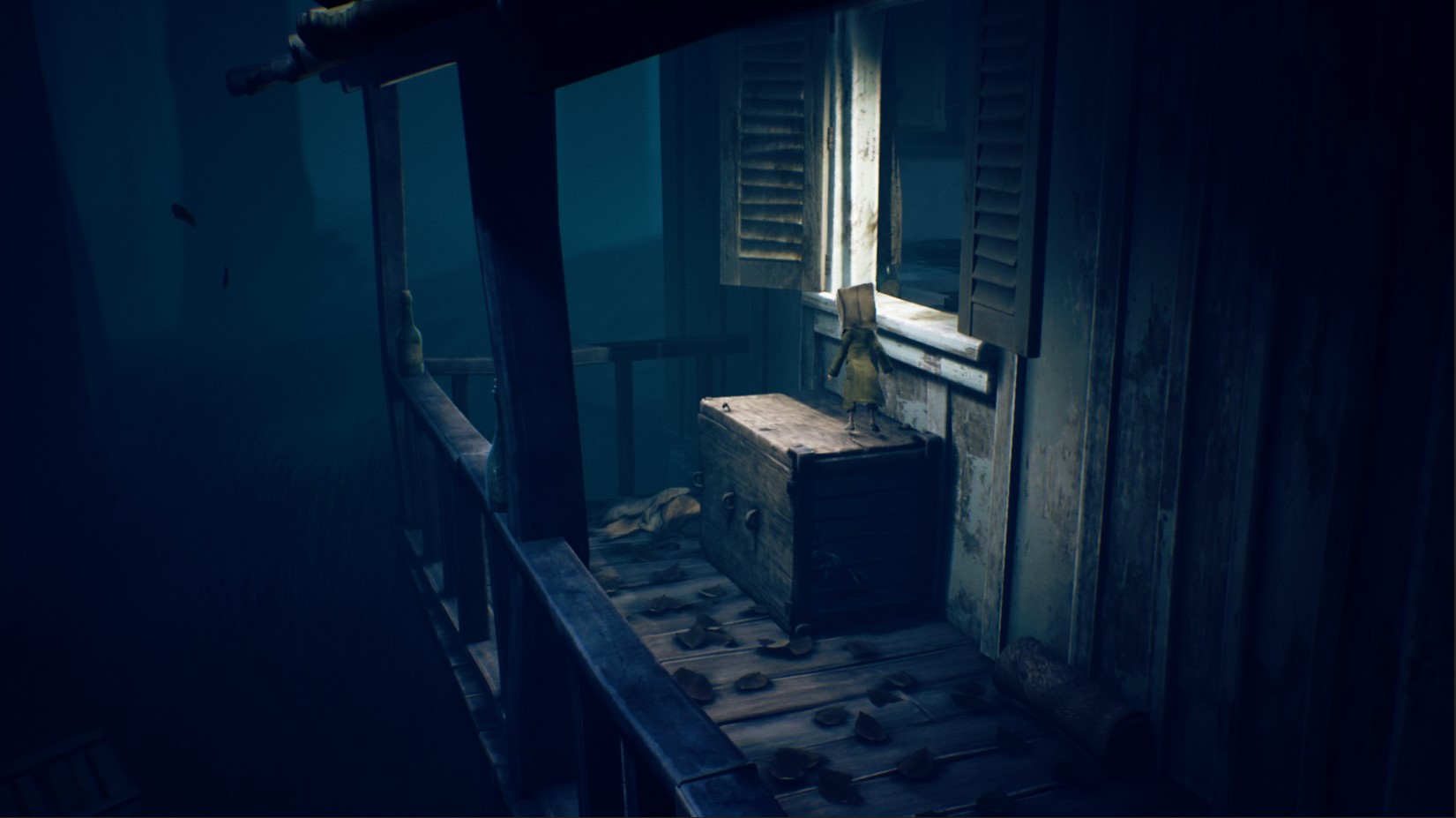 Crouch under the table, then push through the door into the hallway.

Instead of going through the illuminated door on the other side, come towards the front of the screen, then go into the room on the left, there’s an equipable hat to find here. 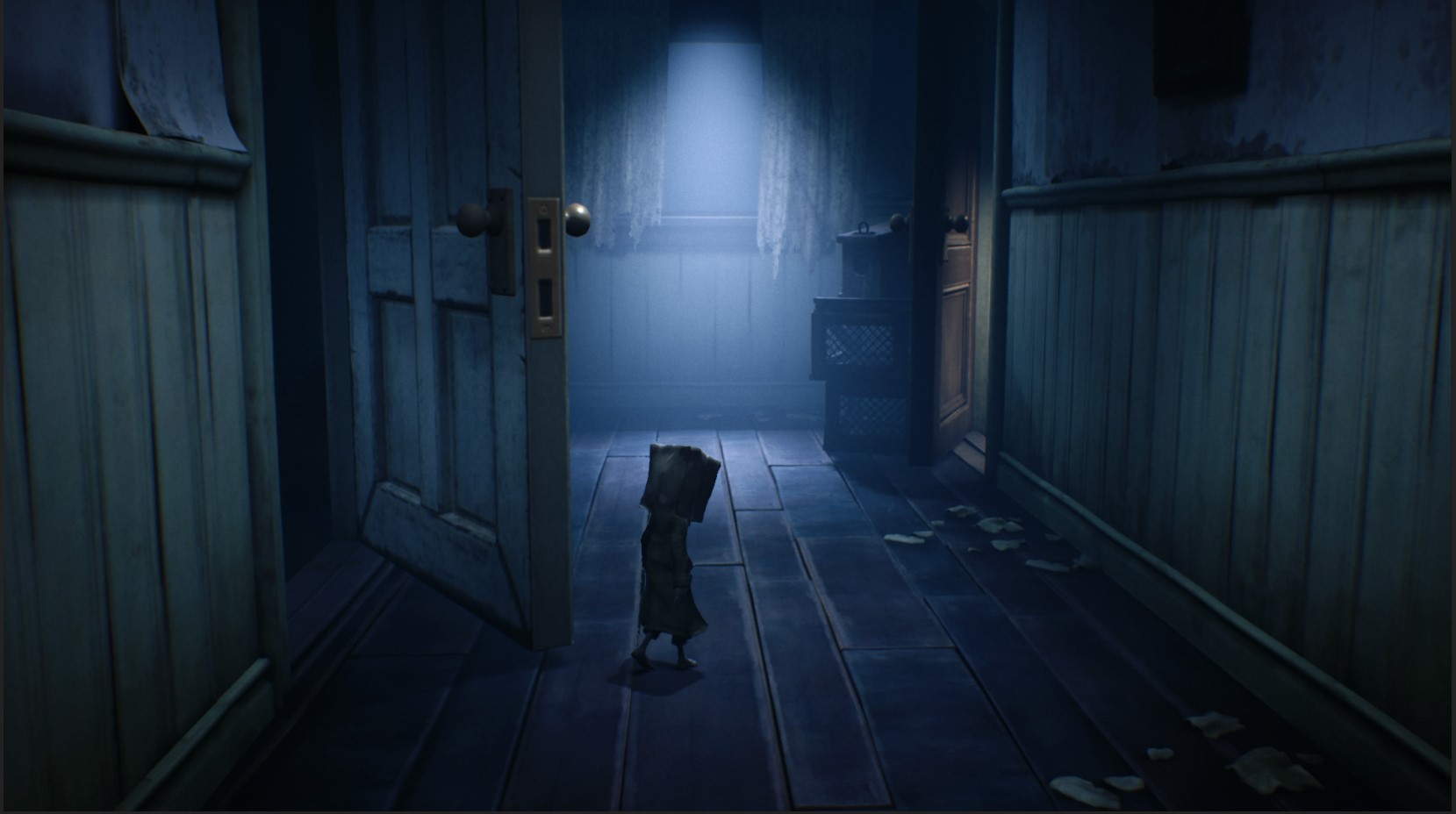 Now return to the door that was ajar and squeeze through.

Descend the stairs, and you’ll see an illuminated ball of rubber bands to your left and what looks like a breakable door with a child behind it. Go right and you’ll see a precarious axe. 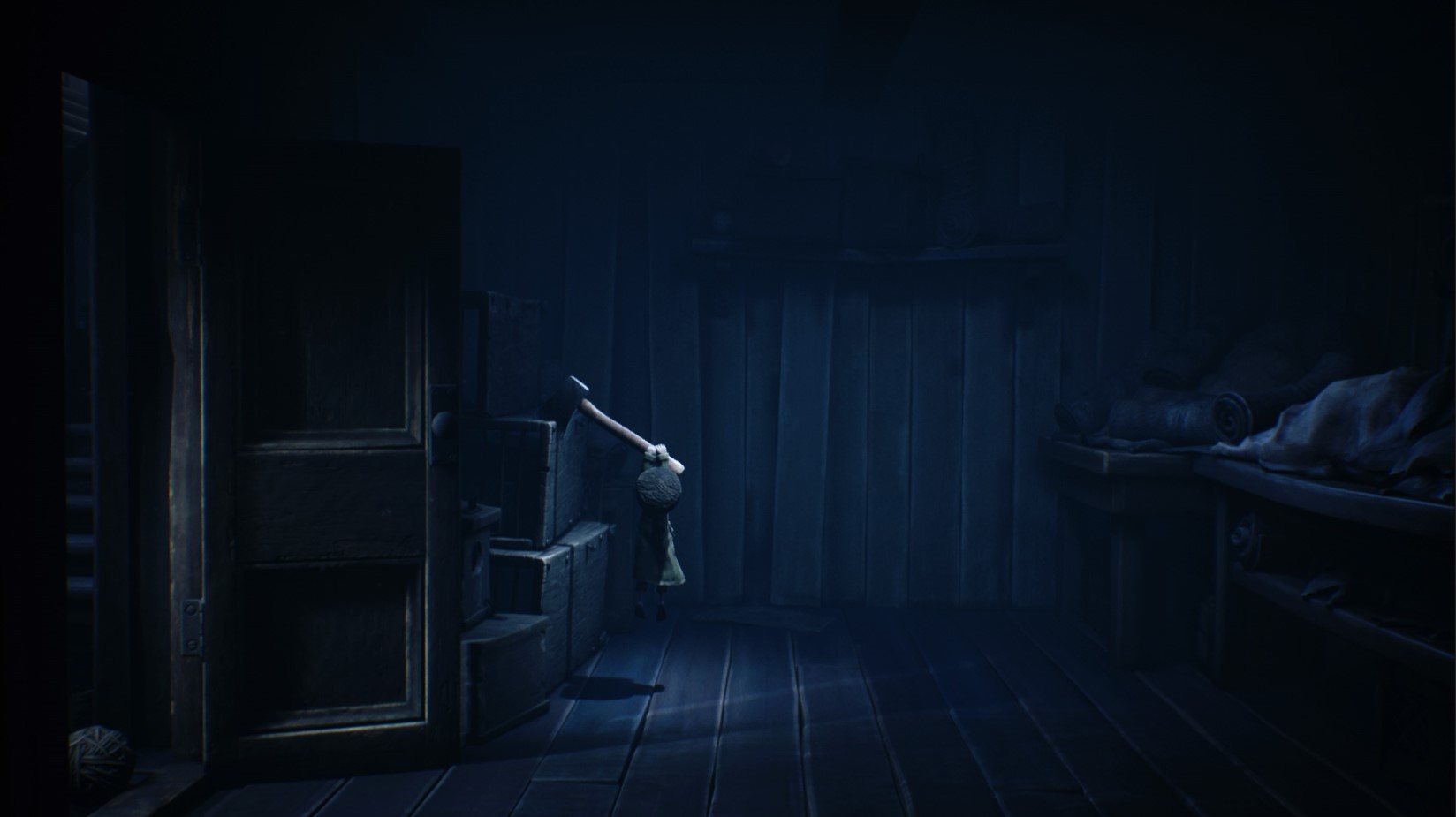 Jump up and grab the axe handle, then drag it to the breakable door. Press jump while you’re holding it to break down the door and rescue the other child.

Follow them back up the stairs, down the hall and to the right.

In the dining room, follow them: jump onto the table, then jump across to the shelving, then up to the grate.

Help them open the attic by pressing grab on them, then climb up the ladder. 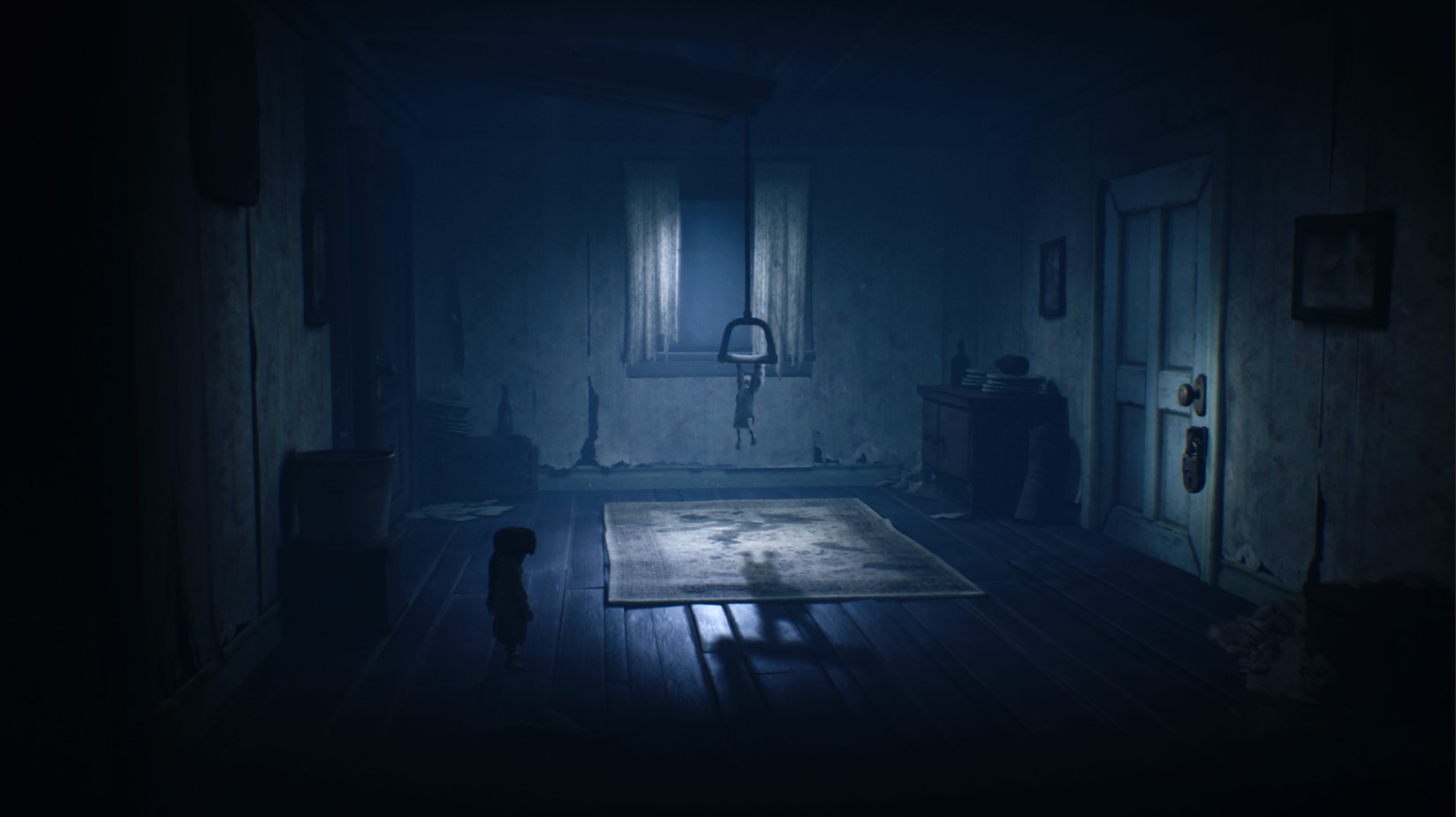 Push the suitcase together then cross the landing with the key above you. 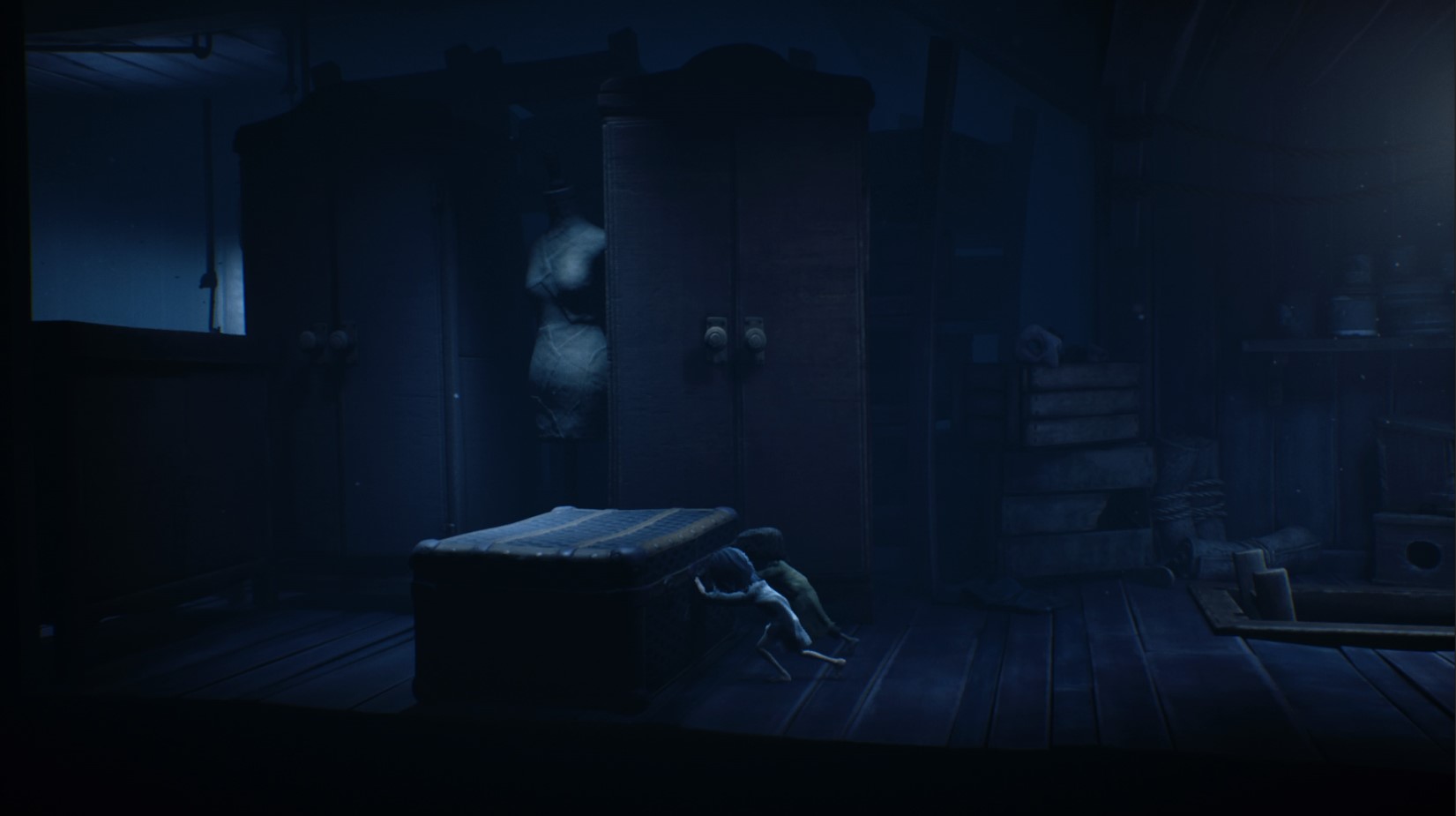 In the next area, you need to grab the handle.

Return to the other child and throw down the handle. They’ll grab it and raise the rope and cloth for you to climb next to the key. At the top, jump across to the key and it will fall. 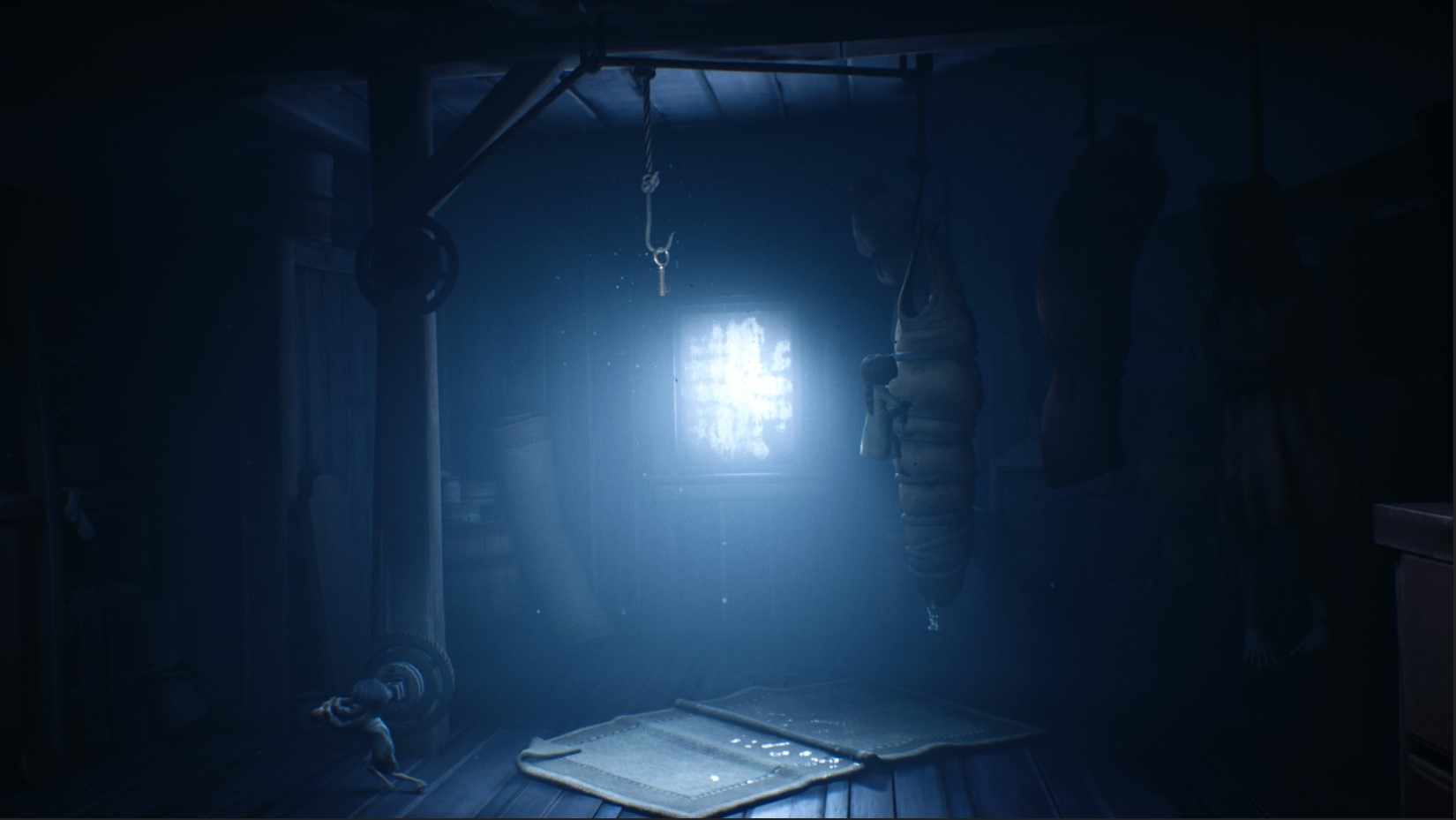 Grab it from the floor.

Now head back towards the attic stairs, pulling out the bottom drawer of the cupboard on the right to climb up. 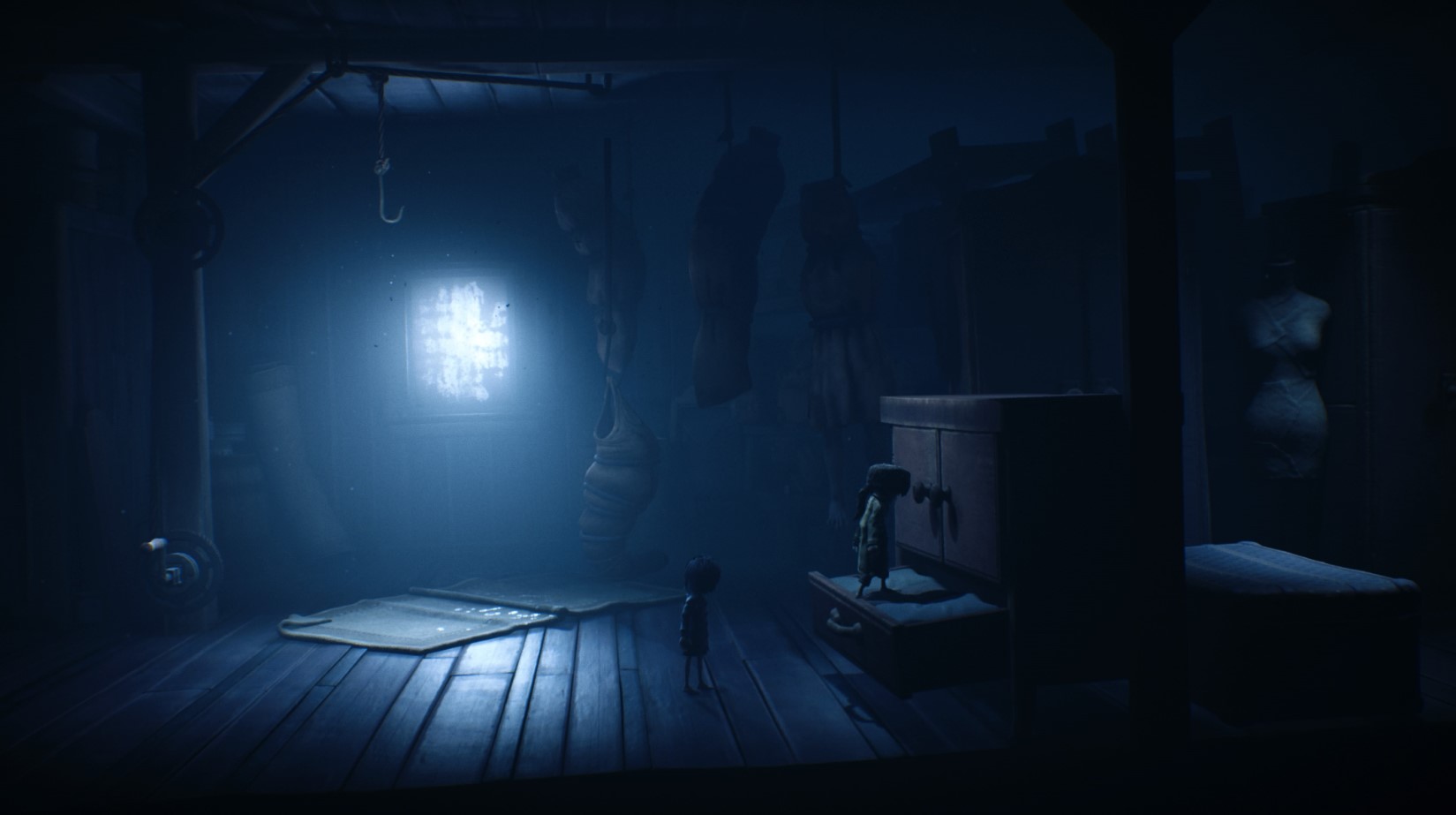 Descend the ladder, then use the key on the big lock on the door on the far side of the room.

In the backyard, traipse onto the muddy grass with your new friend and head into the shed across the way.

Start pushing the box in front of you and your mate will help, then use it to jump up to the next window. 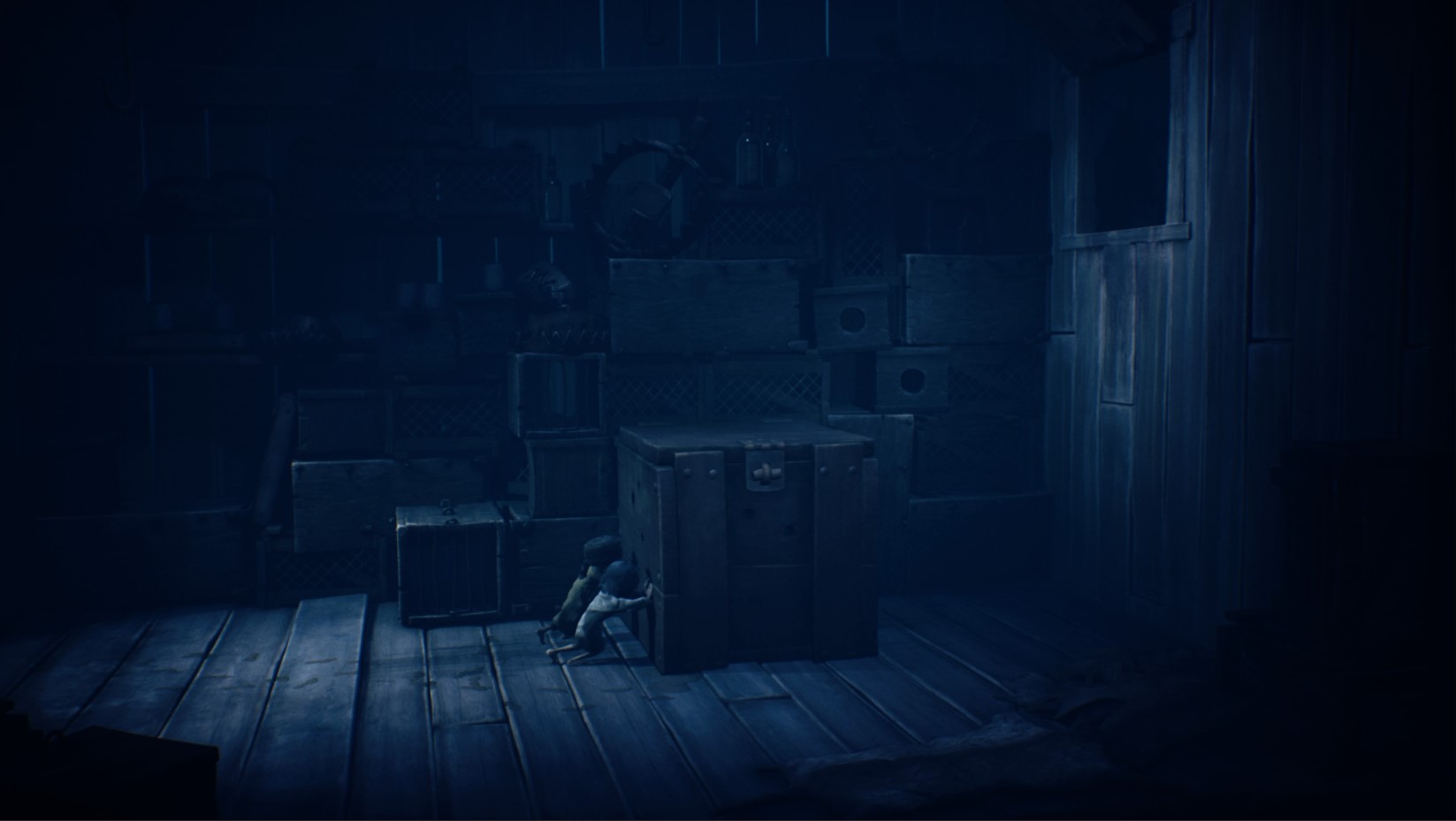 In the next room, take the cue from your friend to crouch and sneak past the working baddie.

On the other side of the room, help them push the flap and get ready to run. 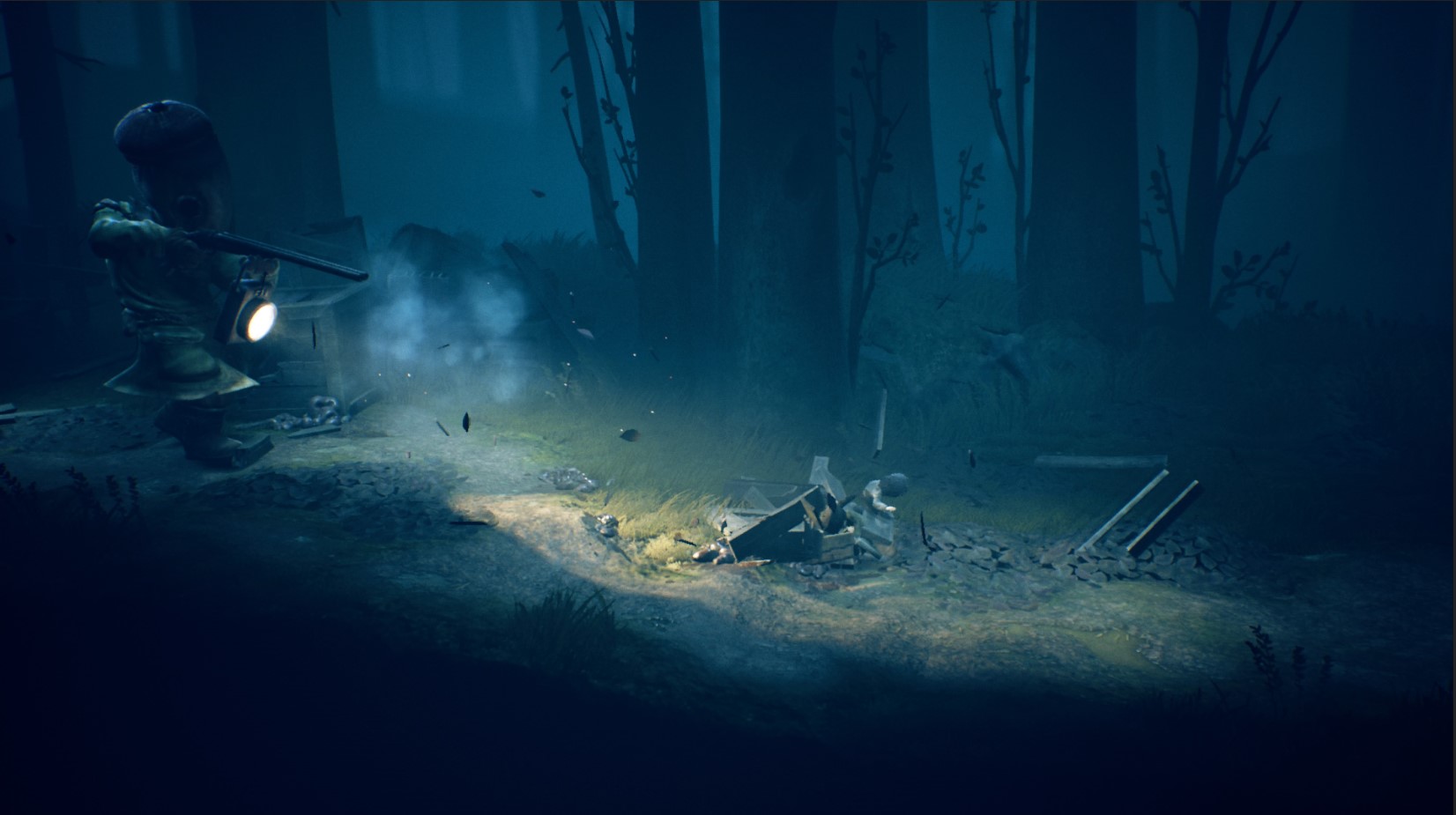 Again, take cues from your partner and hide where and when they do to keep out of the way of the gun shots behind each crate, when you reach the gully, drop down and hide.

Take your friend’s offered hand and slink through the long grass. Keep out of the hunter’s lamp light and when you reach the other side of the clearing, make a break for the rabbit hole when he’s looking the wrong way – let go of their hand and sprint for this bit. 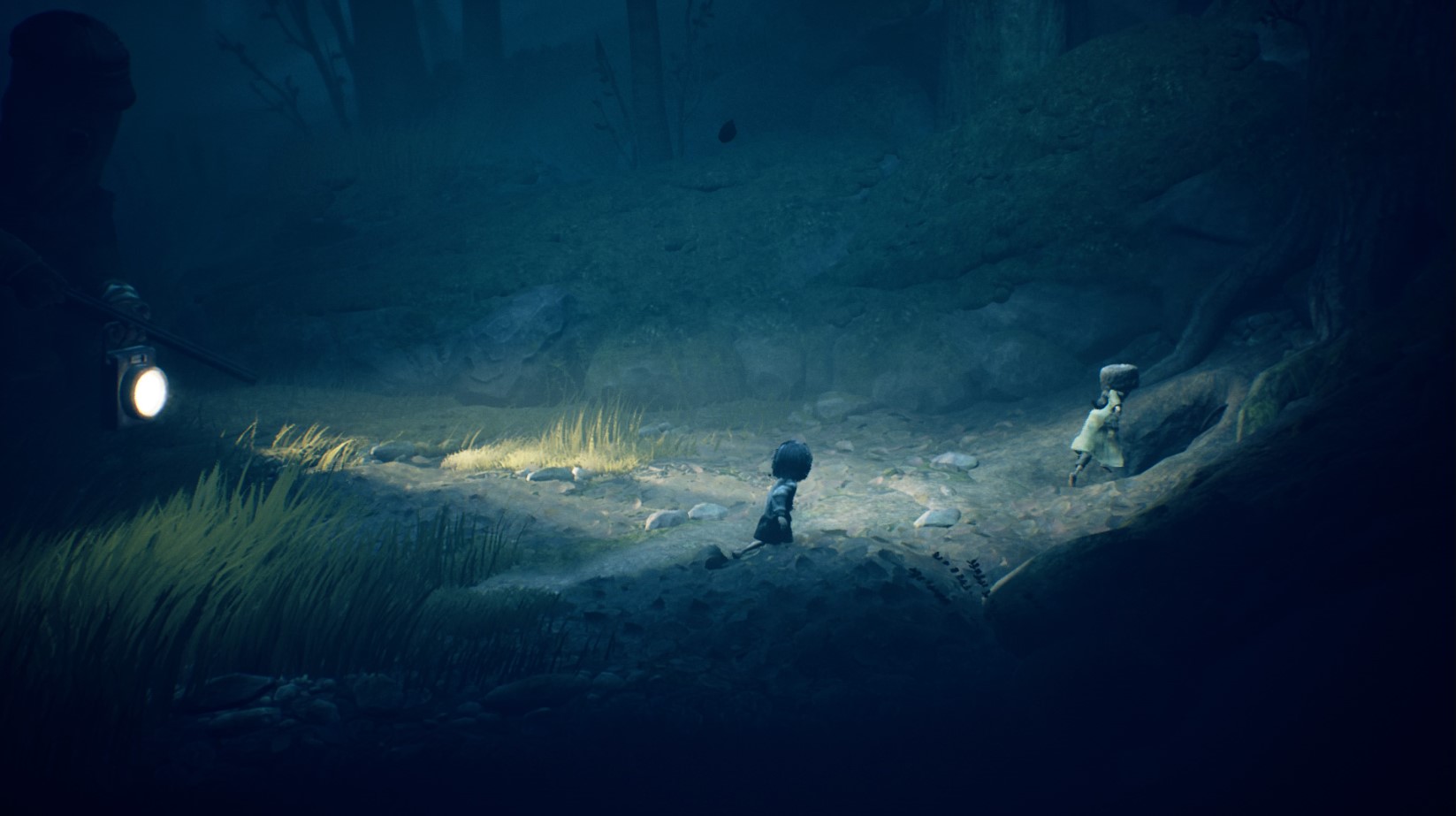 Go through the tunnel and on the other side you’ll come to a bridge.

Grab the rope on the near side of the bridge and let your friend jump across – this introduces the new call mechanic.

Call them and they’ll grab you as you leap to the other side.

On the other side of the bridge, you’ll see some crows and a hat above you in a cage on your left. Clamber up onto the cages and climb up the bars, using them as ladder rungs. 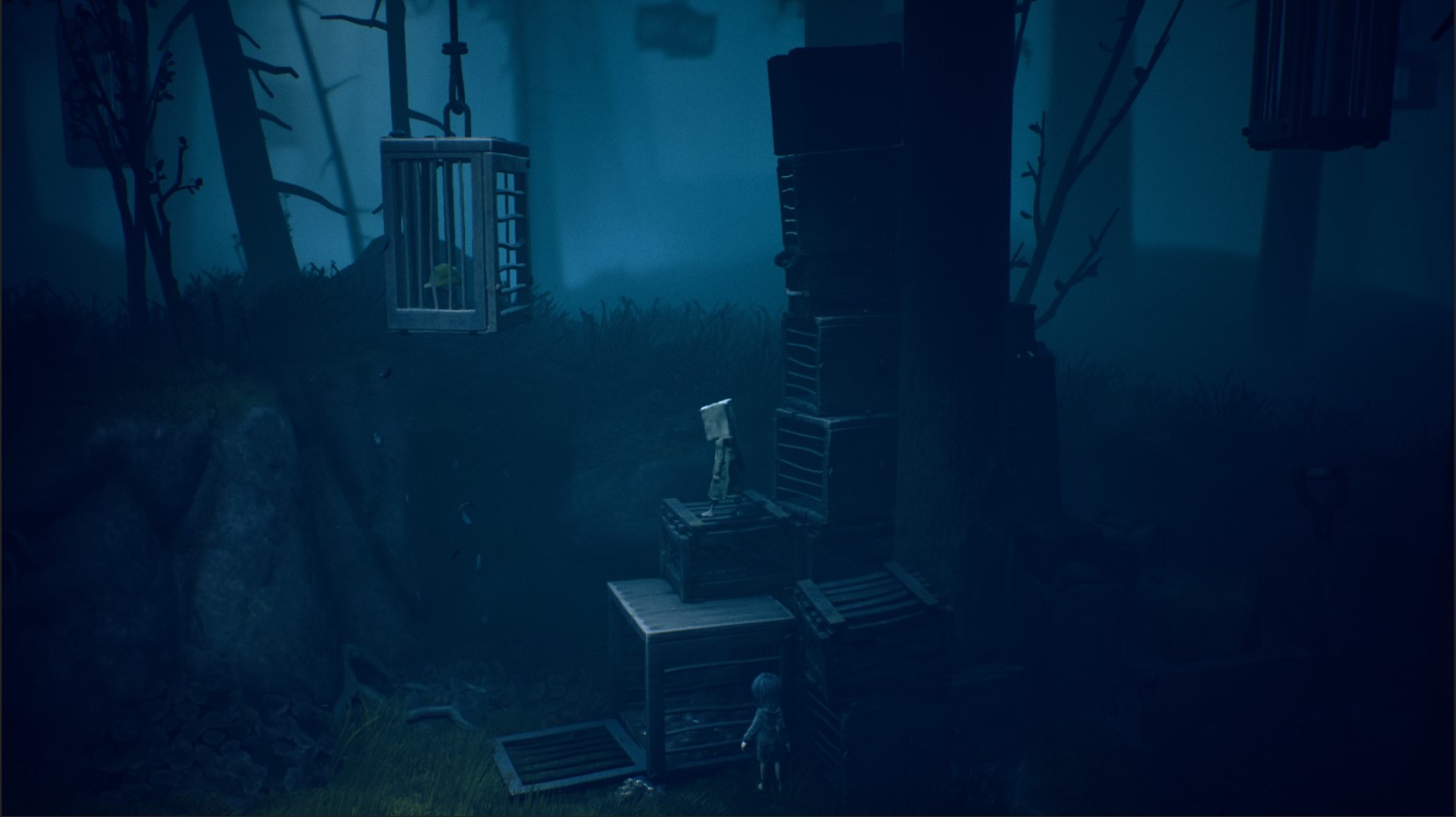 Jump across to the top of the cage and jump about a bit to make it fall – claim your hat-shaped prize.

Press on and you’ll have another encounter with your friend the Hunter to contend with.

Drop down with your friend and once again, use the crates as a barrier from the shots.

At the barn, climb up the ladder, pausing behind the TV to block a shot. If in doubt, stop and wait behind a barrier for the next shot before you keep climbing. 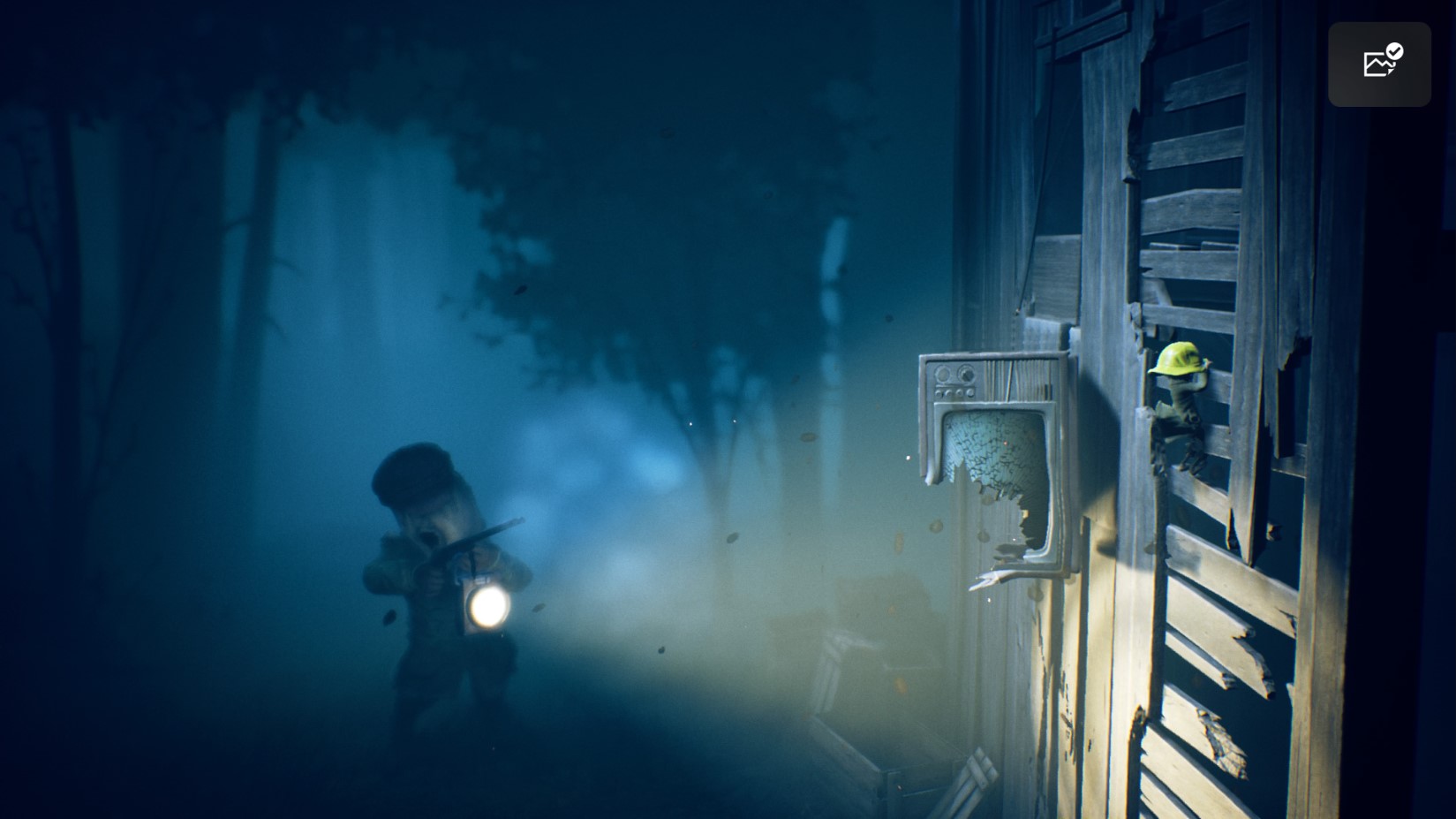 Inside, run across the plank, then keep sprinting across to the window.

Slide down into the drink before following your beckoning friend to hide under the pier.

When the Hunter is off-screen, come toward the front of the screen and crouch to dive under the water. There’s a tunnel here to advance.

On the other side, use the logs as cover to sneak past the lamp light. You can go underwater to slip past at some points, but you can’t hold your breath for long enough to get all the way.

After that part, climb up onto the bank and push the tree with the heart carved into it. 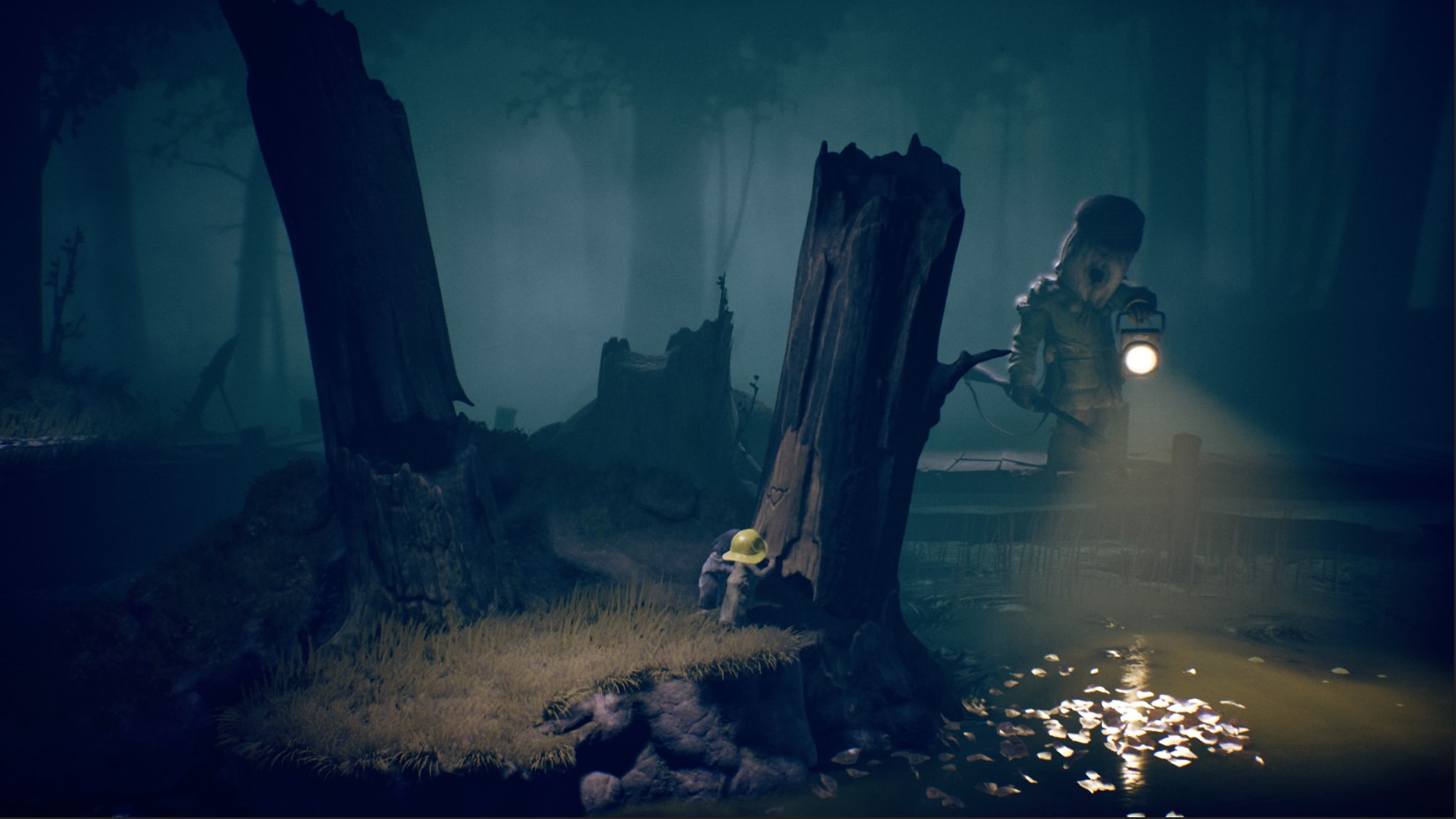 Then use that log as cover to get to the next bank and climb up the ladder there.

At the top, drop into the next area, then sprint between the crates as you have done before, then dive through the open door of the shed at the other side. 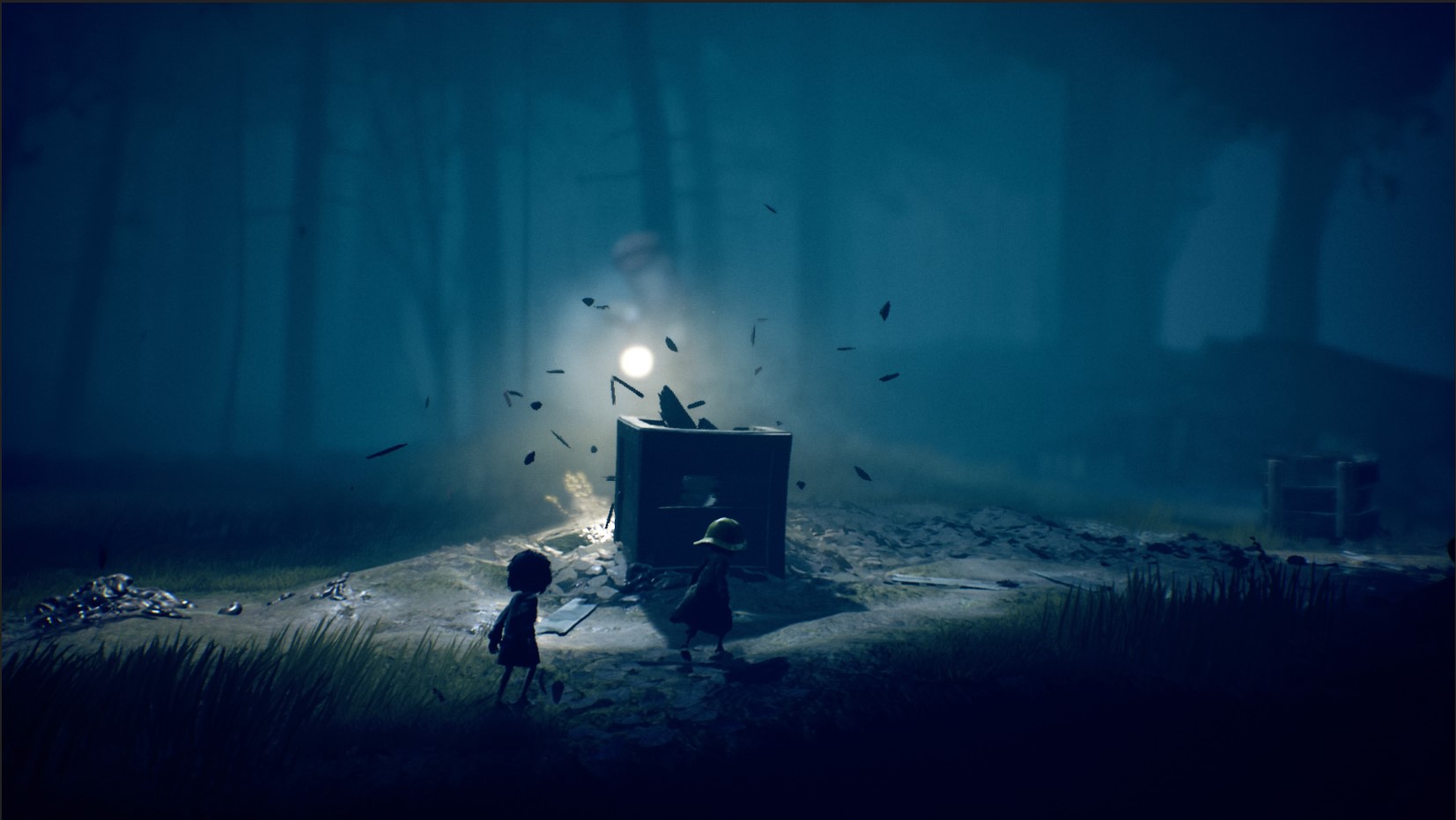 Inside, use the box to jump up to the shotgun, then help your friend lift it.

Use the box to hop out of the window, then help your friend push out the driftwood door. 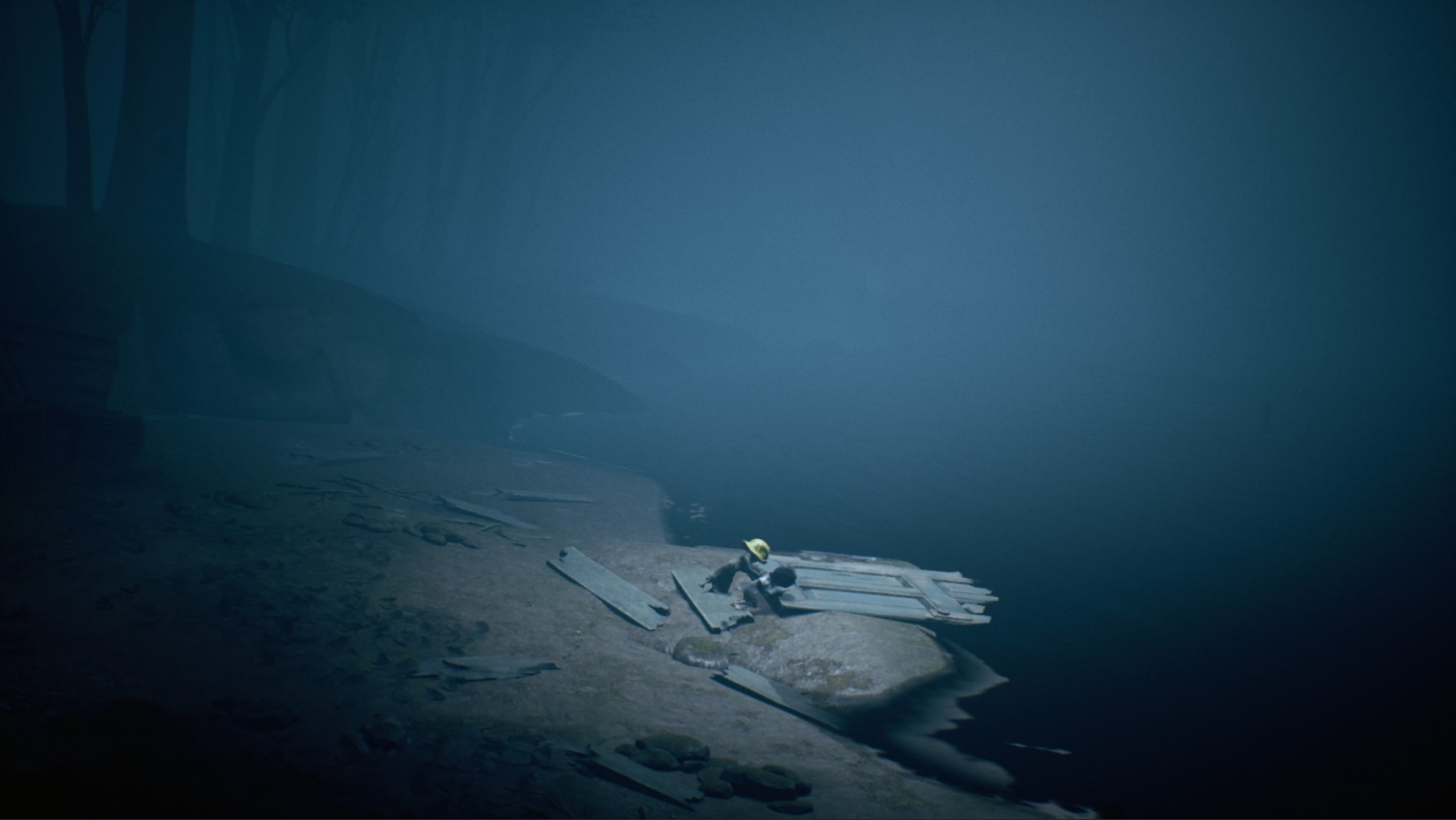 On the beach, press forward to the illuminated door and head inside. 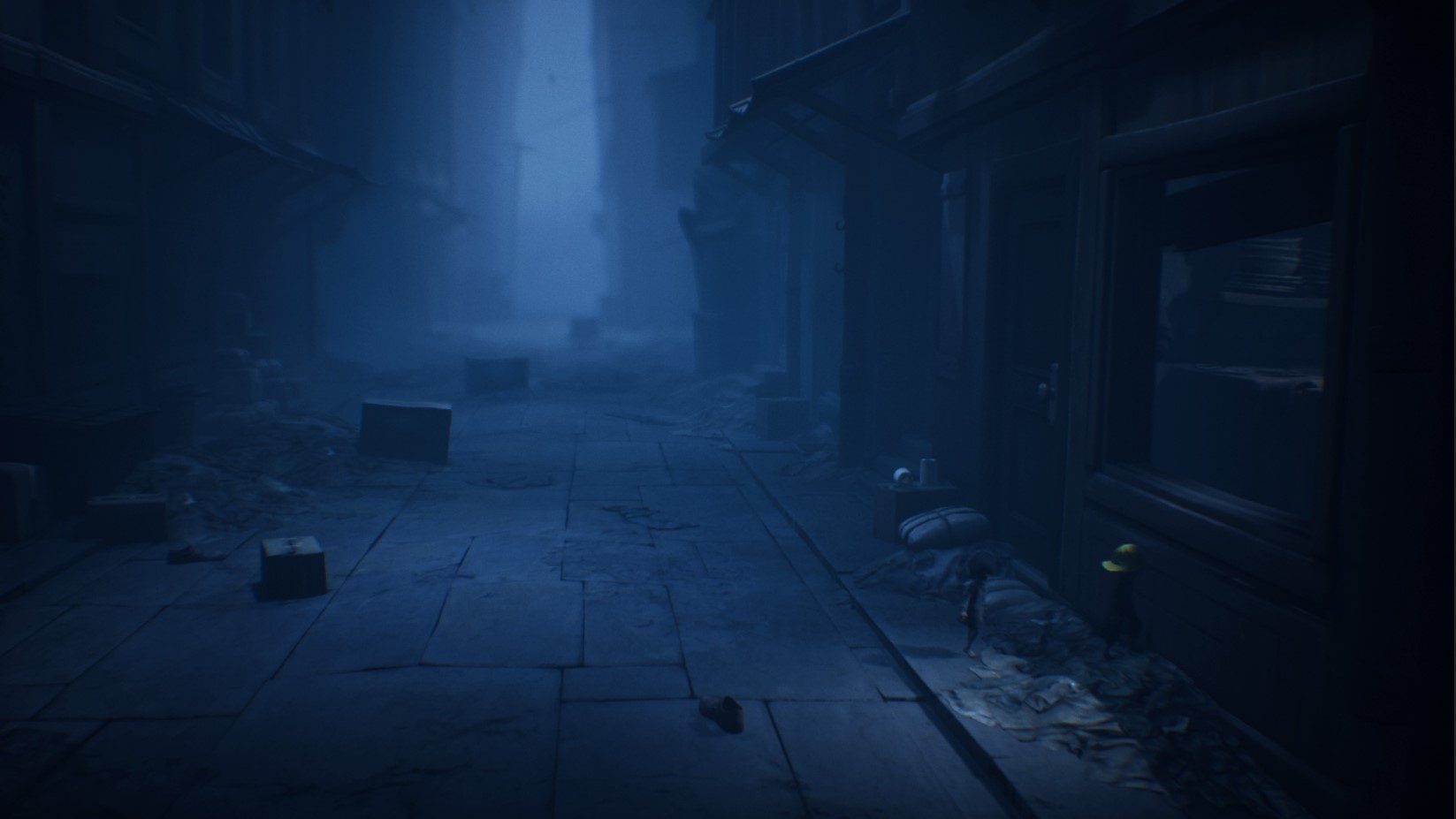 Eventually, you’ll squeeze through a broken door. Then get a boost from your friend to get to the next bit.

Where you see the hanging hook, jump and grab onto it. Swing and you’ll kick the TV opposite off its perch and be taken up to the next level. 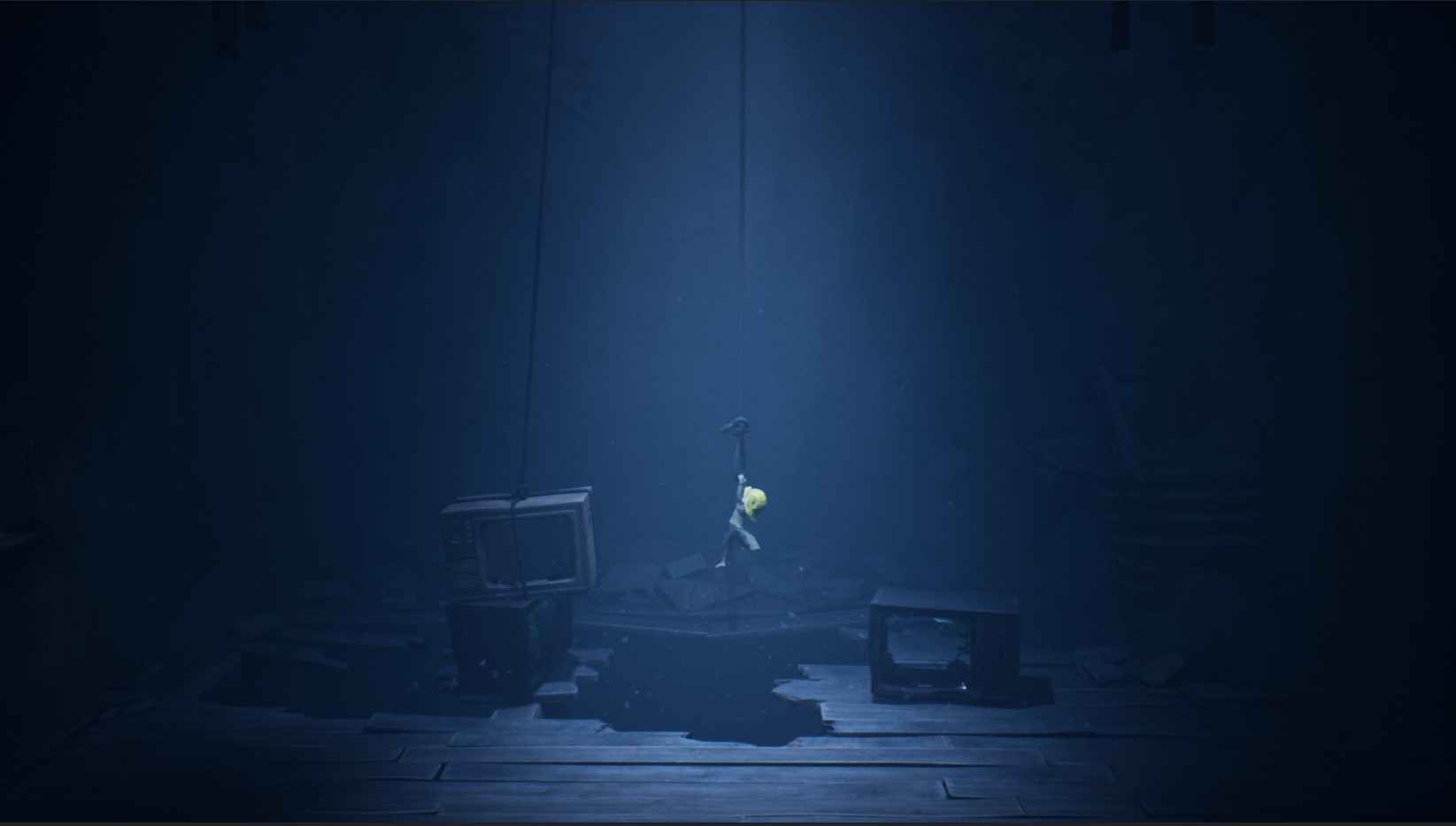 Here, jump onto the landing then head left to knock off the TV and help your friend up. 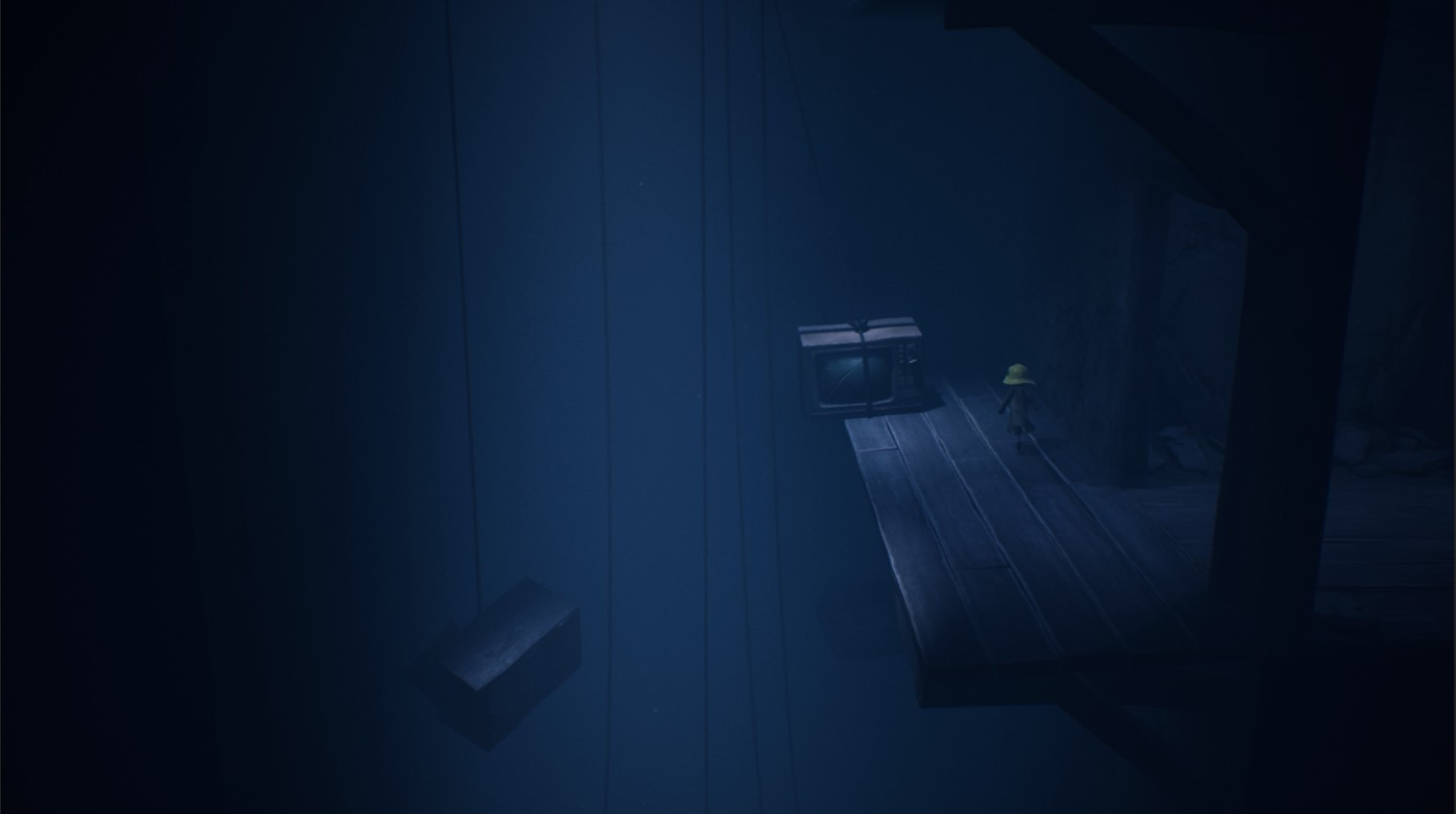 Then head around to the right and up the stairs to join them by leaping over to their outstretched hand.

Now head around and over the thin beam before going through the door on the right.

Inside, your objective is to tune the transmission on the TV screen. It’s a little unclear what to do in this instance, but first, you need to walk up and touch the TV screen. 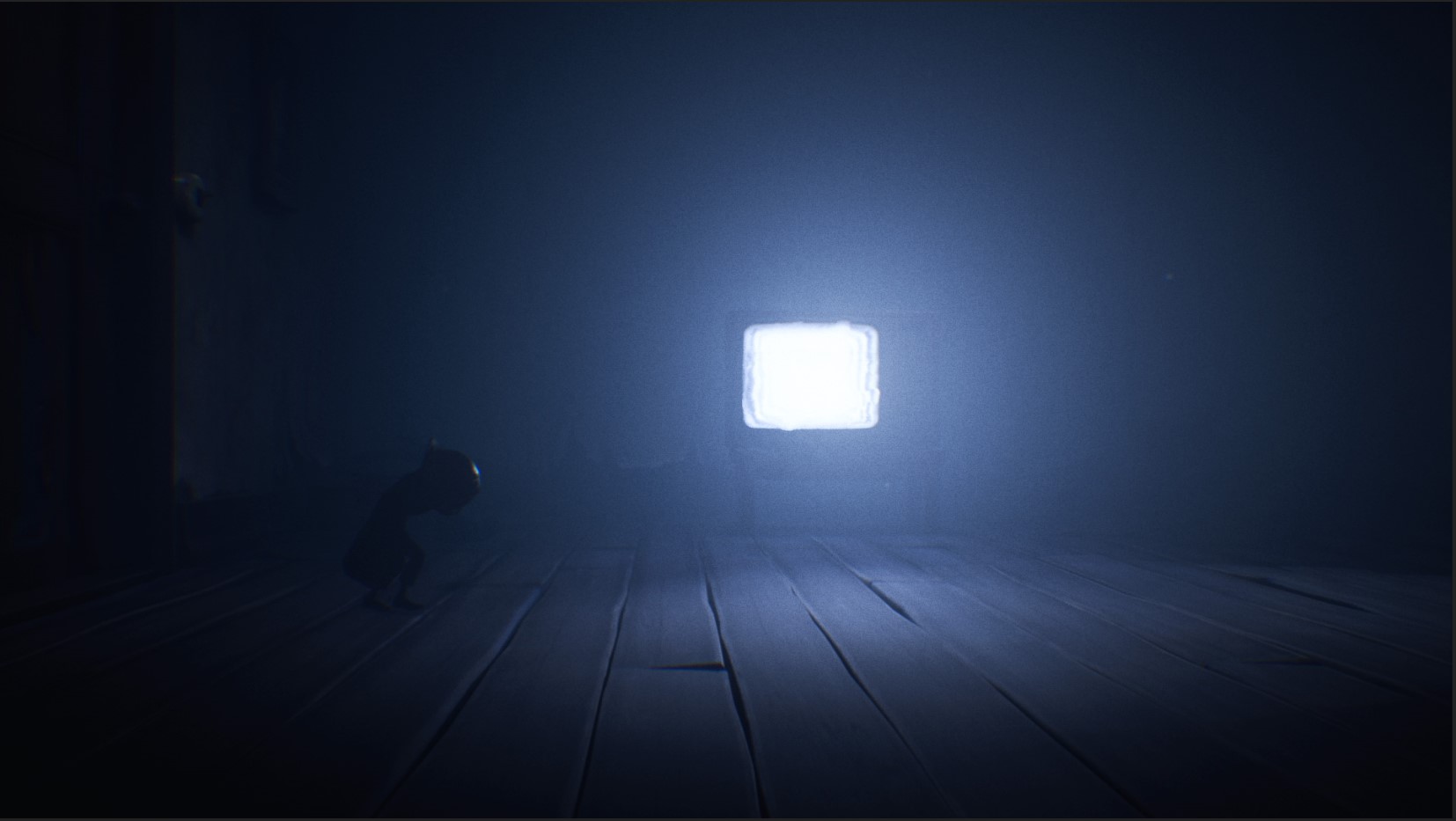 Now you need to rotate the stick on your controller so that the scene on the TV is straight – ie. the corridor in the picture is a straight line.

Move the stick around to the right place and the lighting will grow more intense as you get closer to the right spot. When you find it, hold in place for a couple of seconds, and the puzzle will burst and reset. 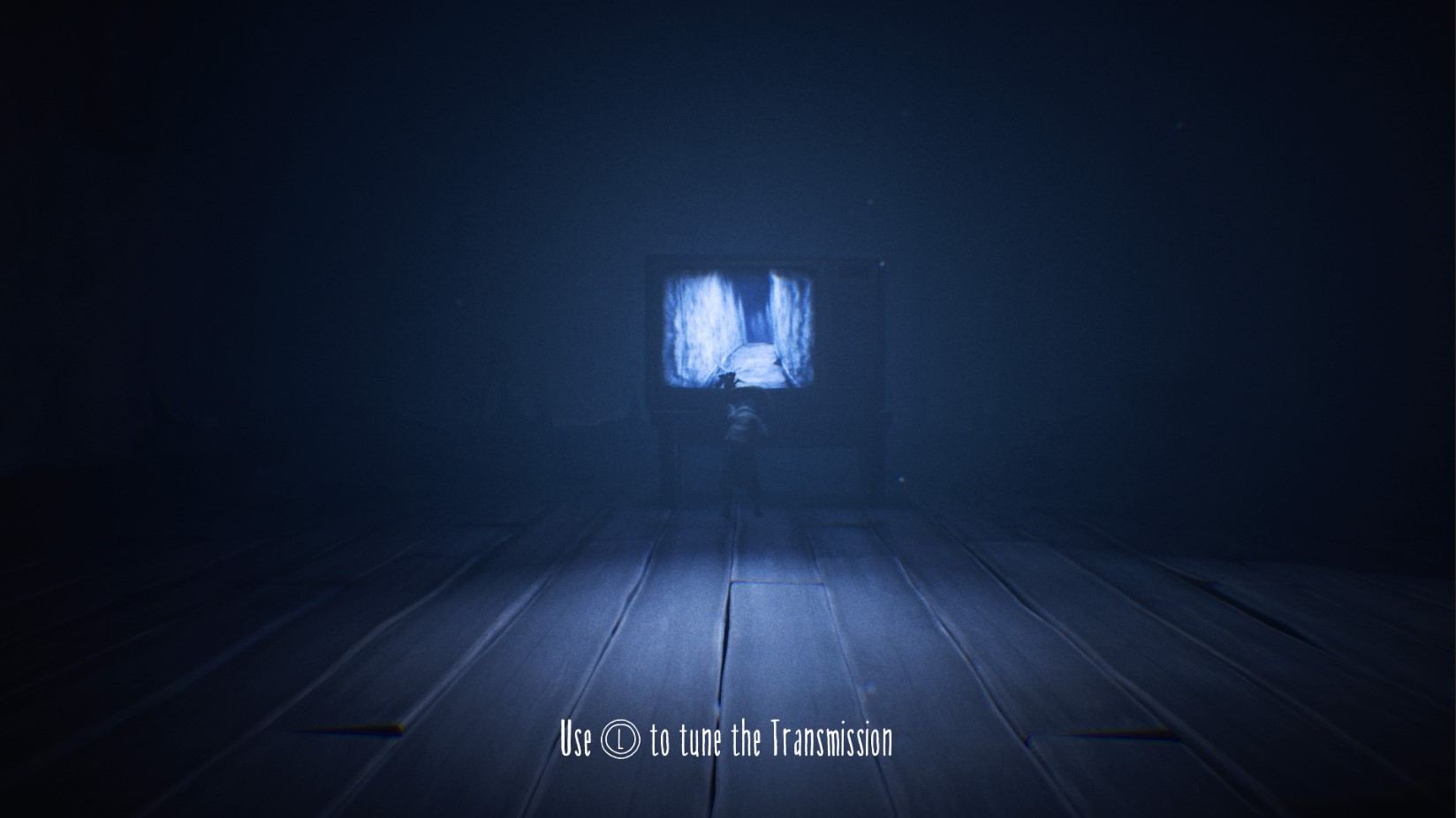 Repeat the action a couple more times and the scene will change.

Now walk towards the door.

After that, drop down through the right-hand window onto the street, and continue into the next part!