Medal of Honor: Above and Beyond sometimes feels like it doesn’t quite know if it wants to prioritize immersion or fun, but it’s a decent VR adventure with some cool bonuses.

Those trailers for Medal of Honor: Above and Beyond made a hell of a promise. Playing on nostalgia for the original games and the promise of virtual reality as the next great frontier of gaming, it’s difficult not to be excited and enticed by that vision of a new class of first- person shooter from the franchise and some of the development leads that pioneered that format of shooter in the first place. In that sense, the final game always had a steep hill to climb.

Let me rip the band aid off. Above and Beyond doesn’t live up to the thrilling, pulse-quickening vision showcased in the trailer. As far as a virtual reality showcase goes, however, it’s probably the most exciting more traditional video game other than Half Life: Alyx. But ultimately it’s an uneven experience that is too often undermined by how the inherent clumsy silliness of VR doesn’t really mesh with the realistic, based-on-true-events narrative this series is eager to trade in.

The levels you’re given are sort of a greatest hits of Second World War tropes from gaming, cinema, and history. If you’ve ever wanted to parachute in behind enemy lines, you can. You storm Omaha beach, obviously. Partnering up with the French Resistance? Naturally.

The action is actually generally fine. Shooting pretty much always feels good in VR, though it’s surprisingly difficult to zero in and nail shots – more so than in some other similar games. My favourite level took place on a train, and that was largely because the narrow nature of it, with plenty of doors and seats for cover, made it something of a shooting gallery. That probably says a lot. 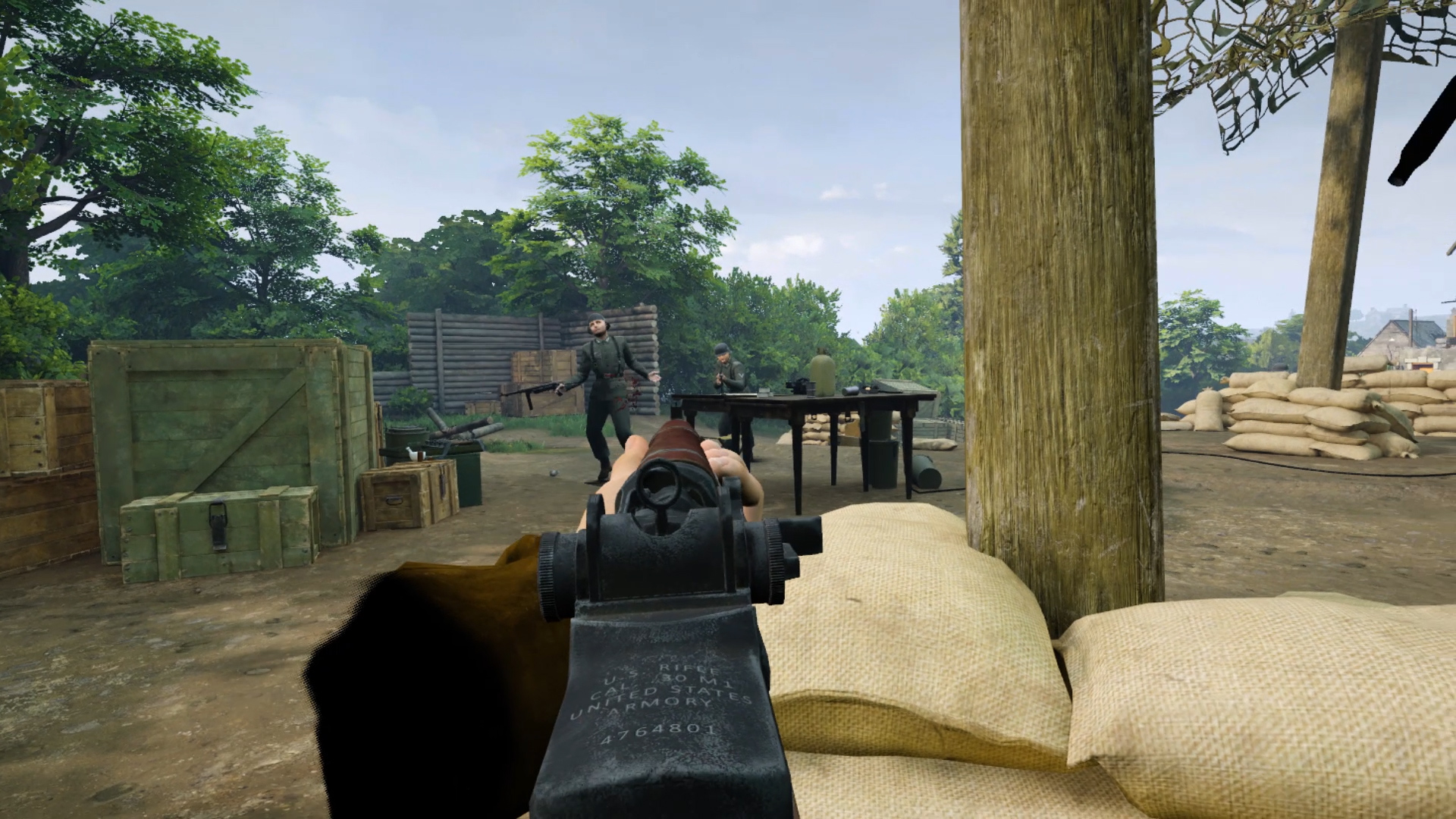 The easiest solution to this is to dial down the difficulty a little, which will give you more auto aim. When the combat clicks, though, it feels a little bit like magic, as all the best VR does. The act of reloading by actually sliding in a clip is great, though it isn’t as decisively awesome or even reliable here as in some other games. That’s sort of the story of Above and Beyond, really – when it’s good, it’s really good. When it isn’t, it falls short of its rivals. This is likewise embodied in the success of the train mission, the beach landing, or when you drive a tank – which contrast nicely to some absolutely terrible underwater segments, so dreadful you’ll be tempted to give up.

Most baffling is the delivery and use of story. The development team at Respawn obviously saw an opportunity here to allow players to put themselves truly into iconic WW2 scenes, but these deeply serious narrative moments are almost always ruined by the way you flail about in the way that VR characters always do. Dialogue scenes run long, which then encourages you to prat about or look around, distracting you from the lovingly-crafted narrative.

Everything is just a little too drawn out, which might very well be more authentic but just doesn’t jive with the mood of the game. The game thrills with a recreation of a real event, like the D-Day landings, but then stops to have characters discuss the real-life trauma of the event in a way that at best feels a little too on the nose and at worst risks veering into disingenuousness. It’s strange, as in-mission it often feels like a different game, with characters cracking wise.

The single best aspect of the game is, without doubt, its actual world. While the raw graphical quality takes the mild hit you’d expect from a VR game, the detail present in the world is incredible, and makes clear why this game features such a massive install, which once completed sits at around 170gb. The VR nature of the game is leaned into with environmental detail, with more to do around each level than in a traditional shooter. Buttons can be flicked, incidental items can be picked up – and you can lose quite a long time just enjoying dicking around in the lovingly-crafted environments. 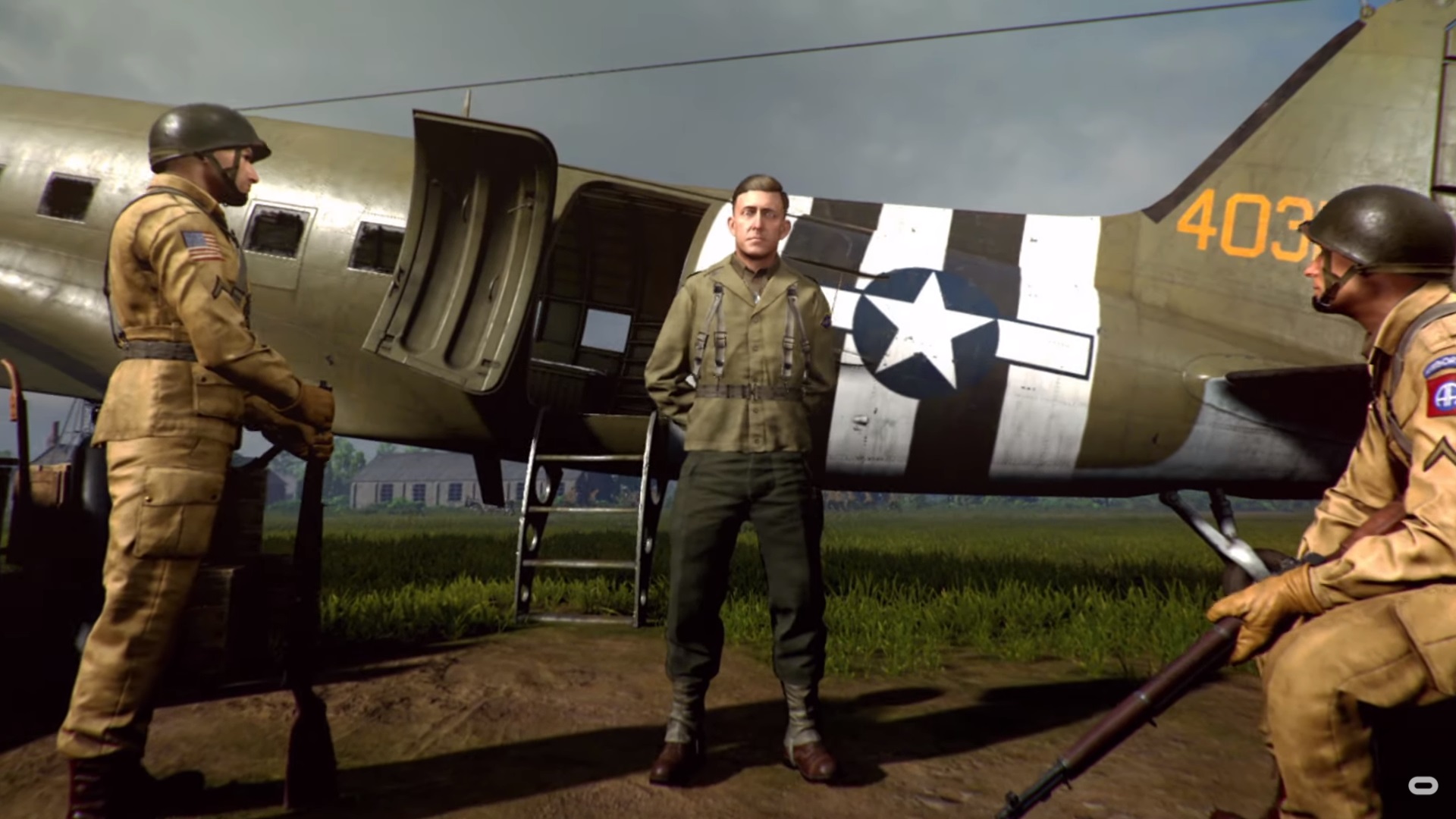 There’s multiplayer as well, which functions fine, but is tied to all the same triumphs and shortcomings of how Above and Beyond moves and controls. It’s fine. You won’t be choosing this over a more traditional, non-VR shooter any time soon, though.

More interesting as a bonus are the included documentaries, covering the war and featuring some beautiful, in-depth interviews with real life veterans. These are tied to completing campaign missions – after finishing one, you can hop out and learn some more about the actions upon which the in-game missions are very loosely based. There’s some VR enhancement via the inclusion of 360-degree photos of areas of interest related to the stories, which you can then explore. These documentaries are generally absolutely brilliant, and are a superb addition. Indeed, when the story bogs down and gets a little rougher, they’re a nice encouragement to keep going.

It’s clear that Respawn still has the chops to make a quality Medal of Honor game. There’s a lot of heart here, and an attention to detail that must be admired. With that said, it’s clear the studio had troubles accomplishing its goals in VR – and the result is a curious VR experience that’s worth experiencing, but equally is nothing like a VR system seller. It stands strides behind Alyx – but then again, so do most VR games.

Version tested: PC, with Oculus Quest 2 & Link Cable [Specs]. A copy of the game was provided by the publisher.