Assassin’s Creed Valhalla’s most notable mini-game, Orlog, is getting a dedicated board game that’s due to hit the market in 2021.

The dice game, which you will have most likely encountered if you’ve booted up the latest game in Ubisoft’s open world series, tasks players with depleting their opponents’ health tokens by stealing dice, firing arrows, and hurling axes. As mini-games go, it’s quite a good one.

Wanting to capitalize on the success of the mini-game, Ubisoft has revealed a collaboration with collectibles company PureArts, with the companies planning to bring a physical edition of Orlog to the real world in 2021 (thanks, Dicebreaker).

If you haven’t seen the game within a game in action, it’s a pretty straightforward affair for the most part: players must take turns rolling six dice, each decorated with an axe, arrow, shield, helm, or a hand.

You get three rolls, and after each roll you may decide to keep or re-roll your dice (until, of course, the third and final roll where you keep whatever lands). Once both players have rolled, a resolution phase occurs in which damage is dealt – or blocked – and resources are stolen. 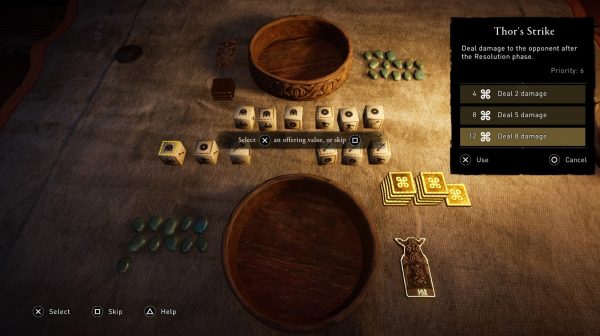 Whilst most of the game will translate to the physical world quite nicely, there’s a small issue in the form of God Favors. These mystical boons can affect the game in pretty big ways, and replicating that in a board game may prove to be the most difficult part of the dice game’s transition to the real world.

Still though, if you’re eager to play some Orlog in the real world, you won’t have to wait too long.

If you are thinking about picking Ubisoft’s latest open world jaunt up, give our review a read and find out what other critics think.

For those who already have the game in-hand and need a bit of help, our guides have you covered, too.