If you’ve been playing Call of Duty: Black Ops Cold War over the past few days like we have, you may have already come across the game’s side missions.

These optional missions build on intel you gathered from across the main missions, and set you on a path to hunt down specific targets in order to weaken Perseus’ network of aides.

In this guide, we’ll focus our attention on Operation Red Circus. As with Operation Chaos, there’s a unique puzzle at the centre here that needs to be solved if you want to do the mission the right way. The Red Circus puzzle specifics are likewise unique for every player, so while we can tell you how to solve it, we won’t be able to offer a sure-fire solution.

We previously covered Operation Chaos in a separate guide, which explains how you can solve its various puzzles and decrypt the floppy disk.

But, we before we get into the specifics of how to identify your suspects in Operation Red Circus, we first need all pieces of evidence.

There are three unique pieces of evidence we need to be able to correctly identify the list of suspects in Red Circus. As with Chaos, you can ignore all the evidence and just attempt the mission as soon as it becomes available, but you’re going to want the better cutscene in the end (and feel smart for a few minutes after figuring it all out).

All three pieces of evidence are found in various main missions in Black Ops Cold War. Some of them appear before you even see Red Circus on your board, while others will be found in some of the latter campaign missions.

You can always go back to the board to check which pesky missions hold intel you skipped out on.

After you enter his home and get finished with the Tranquiliser Gun business with Edda, head upstairs but watch out for Kraus. Immediately get into the room straight ahead as you reach the second story and wait for him to move on. You should be able to hear his footsteps slowly move away from you.

The room next on your right is the master bedroom, and it’s there you’ll find the Ledger; inside the top drawer of the left bedside table (the one with the radio on it). You’ll know you’re in the correct room when you see the ‘In Objective Rea’ yellow banner at the top of the screen.

Grab it and bug out, or keep going if you haven’t finished the mission’s main objective.

Piece number two is the Cassette Tape, and it’s found in the mission Echoes of a Cold War. This is one of the easiest to find, because you can spot it early on the mission before things get loud.

After you take out the snipers and ground troops guarding the SATCOM radar building, make your way inside. Drop down to the lower level, there should be a table to your left with the tape on it.

If you don’t immediately spot it, look in the room until you see the dead body with a crossbow bolt stuck in it. Because you’re playing as Mason in this mission, you’ll see floating numbers as soon as you touch it.

The table is left from where that body is, and the tape pick-up prompt should be very visible at that point.

The Wristwatch is the hardest piece of evidence to find because it happens to be in Desperate Measures, Black Ops Cold War’s most free-flowing mission. This is why the watch may not always be found in the same spot, depending on how you go about getting the key needed to let Adler into the building.

You’re more likely to find it in the Records Room, but it could also spawn in the Server Room downstairs, or in the War Room. You could play this level normally and it will turn up in one of those rooms, but there’s a more direct way of making sure it spawns.

Play that mission normally until you’re asked to turn off the cameras. Once that’s done, immediately head downstairs to the Server Room. You will come across a sign that says the Server Room is in a Restricted Area, keep going.

At the bottom of the stairs, you should see an air duct on the right. This is what’s going to get us into the room. Open it and keep crawling on the left side until you enter the Server Room. You’ll find the wristwatch on one of the desks in the middle.

Alternatively, you could try going to the War Room immediately after turning off the cameras. The War Room is easier to navigate, so you should spot the wristwatch more quickly there.

With all three pieces in hand, it is now time to narrow down our list of suspects. Go back to the evidence board and click into the Operation Red Circus section. If you review suspects, you’ll see that there are eight of them. We only need three, and solving the puzzle is the only way to get the three correct choices.

As we mentioned at the top, the specifics will be different for each player, even if the faces and names are the same. One last note, do not attempt this process without having all pieces of evidence on hand, because if you make the wrong choices and start the mission, you won’t be able to re-do it with a different set of suspects. 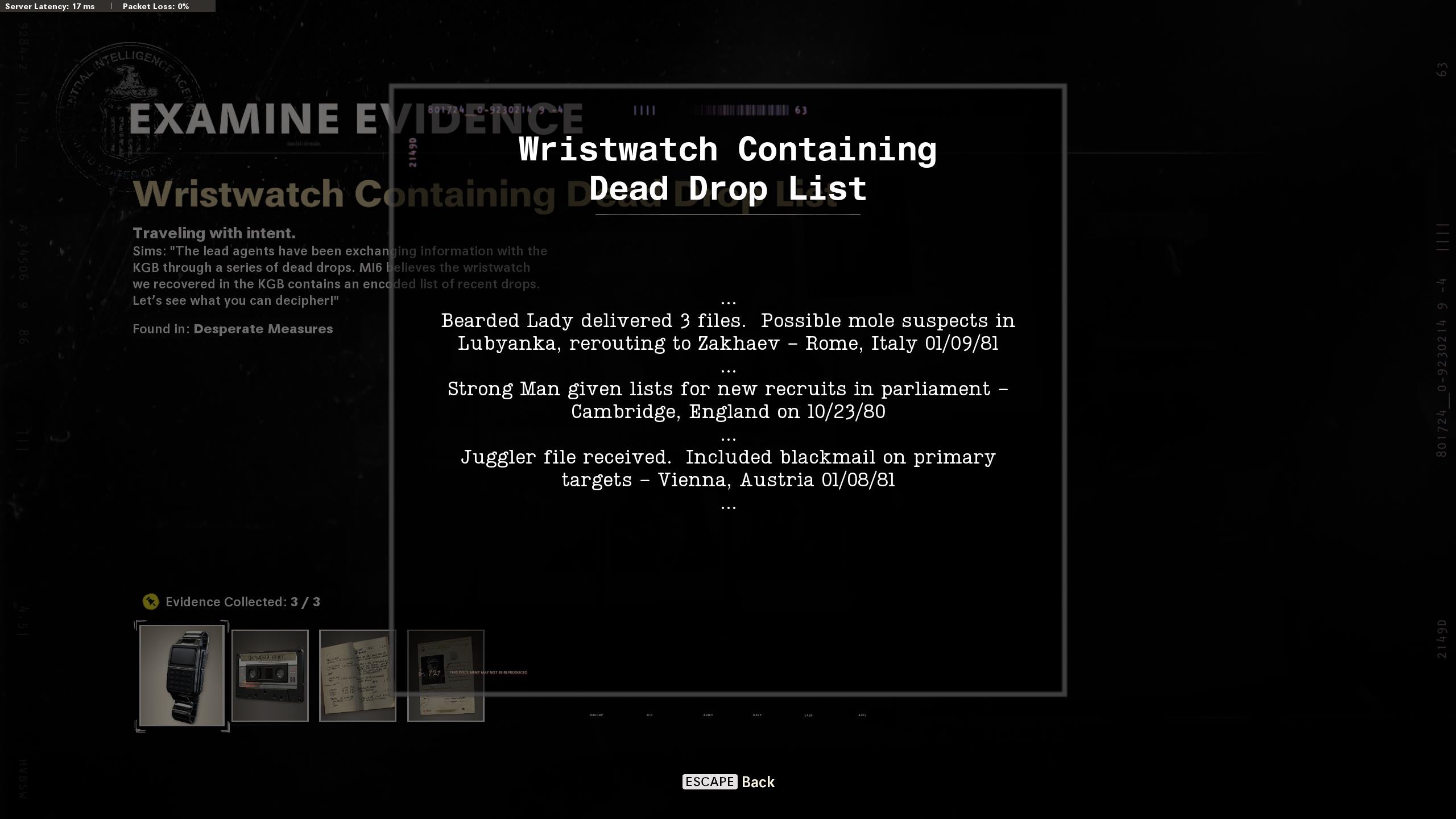 How to identify the Operation Red Circus suspects

Now we need to examine every piece of evidence and cross-reference the names and locations so we can arrive at the three correct targets. The easiest way to do this is to start with the Wristwatch, switch to the Ledger then finally use the Cassette to land on the final three.

Beginning with the Wristwatch, there are three key details we need to pay attention to: the codename of the suspect, the location where the transaction took place, and the date.

Write all three down, and let’s go back to the suspect list to see which of them match the log. Note that dates are in the American format, so the month goes first. Also, don’t get hung up on the gender of suspects just yet. For instance, Bearded Lady may end up being a man, so don’t rule out any men just because of the codename.

Now, check the list for each suspect, and narrow it down as much as you can. Remember, dates and locations have to match. When you’re done, you should end up with a list of names. 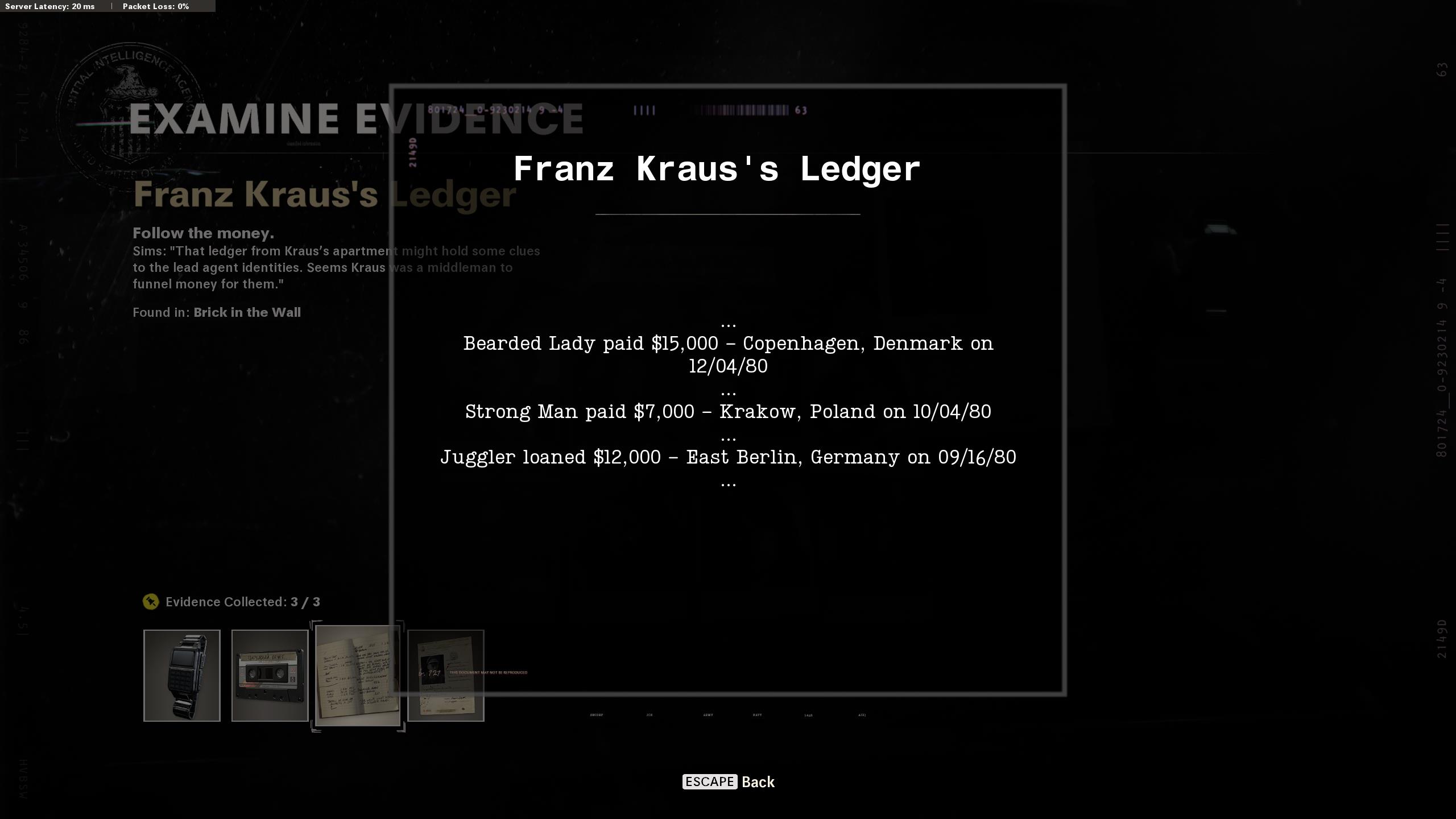 Now let’s switch over to the Ledger. Franz Kraus’ Ledger likewise has three entries that each correspond to a codename, a location and a date. Write down each one and compare that list with the one you made after consulting the Watch.

Anyone who isn’t mentioned in the Ledger goes. This will narrow it down further, preparing you for the final step.

With the refined list in hand, all we need to do now is figure out the gender of our suspects. For this, we’ll need the Cassette Tape. As with the other two, the Tape also has three entries that each correspond to a suspect.

Except here, we need to pay attention to the pronouns. For example, our Bearded Lady was in fact a man, because the entry referred to them as ‘he’. Note the pronoun used with each codename in the Tape, and go back to your list to eliminate any mismatches.

You should now be ready to mark your three targets. Hit Review Suspects and make your choice. After you finish the mission, the dialogue that plays will let you know if you got them all correctly, and there’s a cutscene at the end of the game that will also recap the result of that investigation/mission in a different way.

In case you missed it, here’s our guide for solving the Operation Chaos puzzle and decrypting the floppy disk. We also have a detailed explanation of all of Black Ops Cold War’s different endings, and how to get each one.