Mediatonic continues to add crossover material to Fall Guys with the most recent update adding everyone’s favorite horrible goose to the game.

After the impressive news that the chaotic TV gameshow inspired Fall Guys managed to sell over 10 million copies on Steam earlier this week, developer Mediatonic is celebrating in its own special way.

Not content with collaborations with iconic characters like Sonic the Hedgehog and Godzilla, Mediatonic has teamed up with House House in order to add a skin inspired by Untitled Goose Game to Fall Guys.

The latest Fall Guys update adds a brilliant new goose outfit which split into two parts; the upper and lower half (which is standard in the game). You can purchase each part of the costume for an achievable five crowns per item – so save up your Battle Pass earnings and victory rewards if you’re eager to be the most horrible goose you can be.

You may want to hurry if you want to rep your favorite avian agitator in Fall Guys, though, as the official Twitter account suggests that the  Goose Head and Goose Butt may only remain in-game “for the next few days”.

If you do miss out on the first stage of this honking-mad collaboration, though, don’t fret: Mediatonic has announced that more Untilted Goose Game content is set to arrive in the future in the form of a HONK emote and Groundskeeper and Wimp costumes.

Fall Guys is currently halfway through Season 2, and is available on PC and PS4. 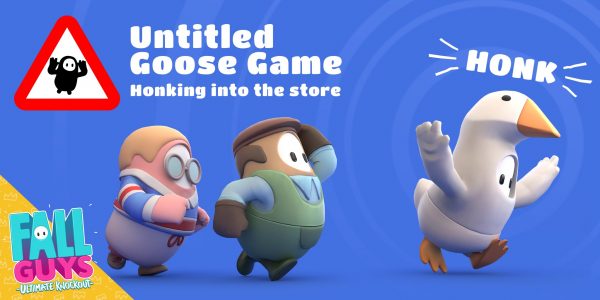