The Pathless is a beautiful, free-flowing action-adventure that might well be a surprise PS5 launch favorite.

The world is cursed. No, this isn’t an op-ed about 2020. This is the setup for PS5 launch title (PC and PS4, too) The Pathless. As ‘The Hunter’ you must free the world from its curse, defeating evil spirit monsters alongside your pet eagle (which you can stroke), and bring light to eliminate the darkness. If that uplifting premise hasn’t sold you, the fact that I found The Pathless to be a rather wonderful and beautiful adventure should.

Movement is everything in The Pathless. The Hunter moves about the large open (and mapless) world pretty slowly, but you’re not really meant to be walking. By shooting your bow and arrow at talismans (dotted all over the world) you fill a spirit meter. This, in turn, lets you run at considerable speed through the world, so if you chain talisman hits you can keep running forever, in theory.

Your eagle can be used to fly around, too, with the game using a “flaps” system to propel you higher into the air – a separate meter can be filled by collecting crystals, granting you an extra flap each time you max it out. Flaps might sound like the least exciting game mechanic of all time, but it opens up the world, giving you the ability to reach new locations. The aforementioned talisman-shooting can also be done in the air, The Hunter chaining hits to keep you afloat at speed rather than gliding around when using the eagle.

A neat touch, and one that highlights that the focus here isn’t on skill but on stylish, rapid movement, is how all talismans are auto-targeted when you get within range of your bow. Hold down the trigger until the target lock icon is filled and release to shoot the talisman and gain spirit energy. Certain talismans can be shot with different timing to give you more of a spirit boost, but this game is far better for not asking you to aim. Doing so would have severely limited the ability of most players to whiz about like the devs intended. 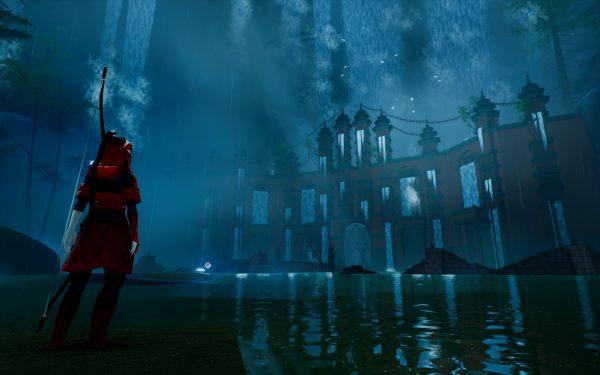 The Pathless is a beautiful game.

Puzzles, which must be solved in order to bring light to each area and in turn make the spirit beasts vulnerable, break up the nippy talisman hopping. A special vision mode highlights areas of interest, but you’re free to tackle these in any order, a sphere of fire that is home to the zone’s beast, your only deterrent. Stray too close to this and you’ll enter a new realm where you can’t use your eagle and must stay out of the beast’s sight as you sneak to where your pet has fallen. The puzzles, which revolve around firing arrows through targets or lighting fires, offer the perfect amount of challenge without ever becoming frustrating – the fact that you don’t need to solve them all to reach each boss battle helps, plus gives more to do once you’ve seen the credits. 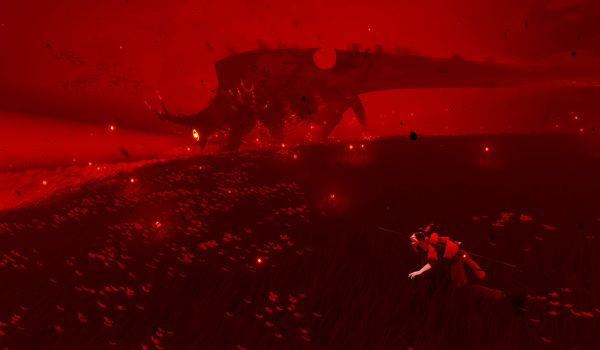 The beast encounters are awesome.

Developer Giant Squid, the team behind the excellent underwater swimathon Abzu, has created a gorgeous world that has a similar stylised appearance. This might come across as simple if given a casual glance, but play for any length of time and you’ll quickly see that this is anything but. While the massive world is full of postcard vistas, it’s the spirit battles that are the true highlight. Bathed in a fiery red glow and often accompanied by actual blazing fireballs, these fights against huge beasts are a visual spectacle worthy of that new console (and maybe new TV and soundbar). I played on PS5 in performance mode as resolution mode lacked the smoothness the game dearly deserves.

These multi-stage battles are superb, heart-pounding affairs, yet once again don’t punish your ability, or lack thereof, to twiddle some sticks. If there is a fail-state I didn’t encounter one. This doesn’t mean there isn’t some challenge, with these boss encounters requiring smart timing – you just aren’t ever kicked out to a previous checkpoint and forced to replay a chunk of the game again. You’re always moving forward in The Pathless, both physically and with your game progress.

I hope it’s clear that I really enjoyed The Pathless, a game that prior to playing hadn’t really caught my eye. I hope it isn’t lost amongst the PS5’s bigger, noisier releases, as it’s something different and uplifting. It’s rare to find such tension and threat in a game that’s also so peaceful, but Giant Squid has managed it. In truth we could all do with a bit of light in our lives at the moment.

Version tested: PS5. A copy of the game was provided by the publisher for the purposes of this The Pathless review.