Vikings have enjoyed another pop-culture renaissance, with high-profile TV shows in the form of The History Channel’s Vikings, and the BBC & Netflix co-production of the adaptation of ‘The Saxon Stories’ series, named The Last Kingdom. Both shows stray from the traditional idea of Vikings that we were all once taught while growing up; There aren’t any horned warriors in sight, they don’t just run after innocent people, butchering them in the process. Instead, both show Viking culture in a different light, one that is more contemplative between their moments of bloodshed and conquest. Enter Assassin’s Creed Valhalla.

The game has had a rocky road to release, including the game’s creative director being fired earlier this year, following multiple investigations into allegations of harassment and abuse at Ubisoft.

You play as Eivor, who, along with his ally, Sigurd, sail to England in search of a new place to call home after having refused to bow to a new, young king in Norway. You arrive, set up a small community named Ravensthorpe, and are immediately swept up into the well-trodden ground of the Viking Expansion of England around 865 AD. This period of history has since been mythologised countless times, originally in The Anglo-Saxon Chronicle, and old Norse tale, The Saga of Ragnar’s Sons. This period of history is especially messy, so it was the perfect place for the creators of Assassin’s Creed Valhalla to introduce our band of Vikings into the mix.

In true Assassin’s Creed-style, you’ll get to know and meet famous figures like Ivarr the Boneless and Ubba Ragnarsson, after clearing up the mess left by the Great Summer Army. The plot sees you battle with yourself as you meet the challenges of leading a new settlement, and controlling the balances of power across the kingdoms of England. These stories are dotted throughout England, where you’ll interact with a number of kingmakers, as the scales of power begin to dramatically shift.

This is done incredibly effectively, with Eivor pledging to different realms across England, which sets you on different story arcs to tip power in your favour in those areas. You do start to connect with the names and faces in the game, which are equally interspersed with quieter, character-driven moments in between the heavy politics and action setpieces. There are also revelations to be found in the game that left me completely slack-jawed, but I really don’t want to spoil that for you.

It’s a compelling story, with twists and turns through the narrative to keep you hooked, and stands shoulder-to-shoulder with the likes of The Last Kingdom and Vikings. Though, your player-character Eivor is just your run-of-the mill ‘brute with a heart of gold’, but as you play, the more Eivor grows and develops into a compelling protagonist, with some shocking moments that we’re not about to spill the beans on.

Unfortunately, the near-enough incomprehensible “real world” plot of the Assassin’s Creed franchise continues. Luckily, those moments are still few and far between, but equally bring absolutely nothing to the table when it comes to my enjoyment of the game. At this point, does anyone still really care about it when there’s a whole, much more engaging world to explore and think about? 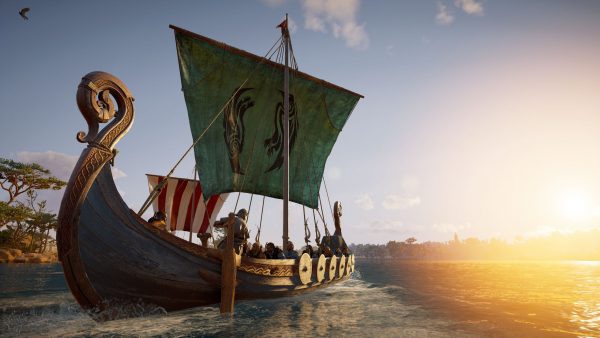 Make no mistake, Assassin’s Creed Valhalla is enormous, and very much follows the traditional Ubisoft mould of littering the map with things to do and places to explore until your legs fall off, including the trademark Assassin’s Creed towers. However, some efforts have been made to change up the status quo, with small environmental puzzles, ‘mysteries’ in the world that break up exploration, and quests back at Ravensthorpe that let you get a little closer to your crew.

There are more emergent events that you can stumble upon, too. One of my favourites early-on in the game was about giving a soldier who had just returned home a wash, after he stank out the house, claiming that being covered in poo, and shooting poo-covered arrows gave him an edge in battle. These are dotted about in the game, and are never added to your quest log, giving you an incentive to take a wee break from the near-endless exploration. It would have been nice to be a bit more grounded in the world of Assassin’s Creed Valhalla, with a stronger focus on the stories of the ordinary folk who live there, but there have been clear efforts made so you get an idea of what life might be like in Anglo-Saxon England.

During the course of the Assassin’s Creed Valhalla, you’ll hear a distinct mood encompassing the journey, this is in-part due to Ubisoft bringing stalwart musician Einar Selvik on board, ex-drummer of the seminal black metal band Gorgoroth, and a founding member of Wardruna, who frequently have songs featured on the Vikings History Channel show. It’s exceptional work, and only deepens the immersion you feel at key moments throughout the game.

When it comes to combat and enemy encampments, Valhalla does manage to break the cycle of the traditional stealth-infiltration loop that was seemingly copied and pasted in every inch of Odyssey’s map. Instead, we have ‘Raids’, which are sieges on settlements or encampments that you’re able to activate when you’re in the area. When you initiate a raid in an appropriate area, you’re able to tackle all the enemies in that encampment head-on, with a band of raiders that you can recruit and select by your side. The raid ends when you’ve collected three pieces of loot that are scattered in the encampment. 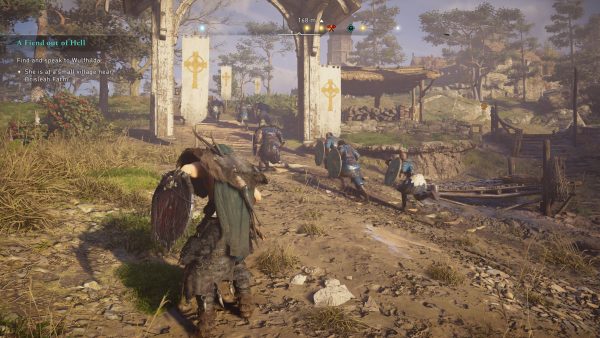 For the most part, these are all straight-up melees with large groups of enemies, with nary a hint of strategy behind it. The same mechanic is carried forward in certain moments in the main story, where you’re able to make use of a battering ram. It would have been nice to see other elements make up raids in the game, but the sheer feeling that you get from it is exhilarating. Your reward for completing raids are precious resources to help you upgrade your encampment at Ravensthorpe, and you’ll be needing to do them fairly often. But it never really gets very old, thanks, in part, to the strength of the combat in Assassin’s Creed Valhalla.

You’re able to fight in a few different styles, choosing from stealth, ranged and melee approaches, with appropriate skill tree upgrades as you go on, like every other AAA game made in 2020. However, I found the most fun pretty much ignoring any semblance of subtlety or stealth, and attacking-head on with two axes in hand, making quick work of enemies along the way. With a range of different weapons and abilities that you can find while exploring the world, the options you have available to you are impressive. While it’s certainly not a Dark Souls-level of slowness to combat, there is a deliberate pace and balance to your swings, arrows and skills, which are all managed with stamina and adrenaline meters, making it feel weighty, deliberate and satisfying.

Gear and skills are tied to combat ability, with gear progression specifically taking a bit of a backseat this time around, with armour and weapons being significantly scarcer than they were in previous games. This essentially forces you into spending your resources into levelling up gear at local blacksmiths, getting you invested early with your character build. This is definitely a welcome change in comparison to the dull, loot-treadmill approach of previous games.

It takes a while to really warm up to Assassin’s Creed Valhalla, and 15-20 hours in I wasn’t quite as keen on it as I am now; but that’s thanks to the game holding up, and actually giving you more as you play, in terms of plot, world, activities and getting to uncover the mysteries hidden deep within the game. It breaks some of the chains that the series was shackled in when it comes to design, while also boldly owning its own identity, too. It might not be The Witcher: Wild Hunt, or specifically do anything that breaks the wheel when it comes to open-world game design, but Assassin’s Creed Valhalla gets you invested. It’s a slow-burn that takes its time to show you its true colours before flourishing into a rewarding, meaty game that’ll keep you engaged over the winter months.

Assassin’s Creed: Valhalla comes to PC, Xbox One, Xbox Series S/X, PS4 and Stadia on November 10, and to PS5 on November 19. Version tested: PC. A copy was provided by the publisher.