If you pre-ordered Watch Dogs: Legion, you’ll be able to unlock a range of special items depending on which version you bought.

Your bonuses should load in automatically but if you’re struggling to find them, we’ve got you covered.

The Golden King Pack comes with the Golden King Mask, a gold skin for two pistols and a gold skin for any vehicles you own. To change a weapon skin, choose an Operative and from the Team menu, select Edit. You can then go in and change the skin of your gun. It’s the same script for any vehicles your Operative owns; simply navigate to the vehicle on the right and click Edit.

If you access your wardrobe at any shop or in the DedSec Safehouse, you can switch your mask to the Golden King mask. 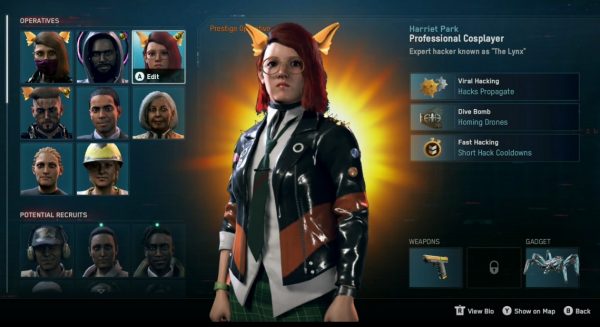 Watch Dogs: Legion – Where to find the Ultimate Pack bonuses

The Ultimate Pack comes with three Prestige Operatives who have some pretty good skills, three new masks and 4-Week VIP Status, which gives you faster XP and ETO gains in-game. Your Operative’s nicknames are Lynx, Leopard and Viper and you’ll be able to access them from your Team menu after you’ve chosen your first Operative at the beginning of the game.

The three masks you’ll receive are the Sapphire Guard mask, Cardboard Cyborg mask and Distortion mask which can all be accessed via the wardrobe. If you purchased the Collector’s Edition, you’ll also get the Ded Coronet mask in-game.

Additionally, players who acquire the Season Pass will get access to Bloodline, a new storyline which includes Aiden Pearce from the original Watch Dogs game and Wrench from Watch Dogs 2, fully playable in the single-player campaign and online, along with two other characters, Darcy from the Assassin’s Order and Mina, who possesses mind control abilities.

If you’re just getting started with Watch Dogs: Legion, you can check out our Operative Recruitment guide here, as well as our guides on how to make a Borough Defiant, where to find Tech Points, how to unlock Stormzy’s Fall on My Enemies mission and how to fast travel around London.