It’s one thing for games to be set in a rain-streaked, dystopian version of London, but Assassin’s Creed Valhalla is an unprecedented chance to pillage some of England’s naffest towns and cities.

My epic adventure begins near errr… Coventry – which some 1,100 years later will come to boast the 4th best internet connection speeds of any UK city – where new protagonist Eivor and their band of merry Viking chums plan their conquest of England from the clan stronghold of Ravensthorpe.

The invasion is going well, and from the war table in the township’s longhouse, I pledge to help my fellow raiders take hold of a prosperous settlement to the north, the seat of King Burgred of Ledecestershire: Tamworth.

Without the bougie convenience of the M6 Toll to aid my journey northwards, I head to the Ravensthorpe dock and set sail upstream, passing a riverside monastery that I promptly raid for raw materials.

Valhalla snaps back closer to the sword and board-style combat we saw in Assassin’s Creed Origins, but Eivor is also able to equip different weapons independently in each hand. Cautious players can hunker behind a shield and wear down enemy stamina to unleash a gory stun attack, or you can just channel one of those hipster axe-throwing bars and flail like the beardy bloke from accounts after one too many Goose Island IPAs.

It feels more like For Honor than Assassin’s Creed Odyssey, with a more grounded quality to the early-game special moves I had access to. You’re more likely to spear tackle an onrushing pikeman than summon the spirit of a bull to charge him down.

With the last of the monastic defenders impaled on their own spears, one of the map markers – which have been streamlined for Valhalla – catches my attention.

Rather than plaster the map with more symbols than a letter from the zodiac killer, undiscovered locations have been condensed into just a couple of icons – white for mini-quests and points-of-interest, and gold for things you can steal. 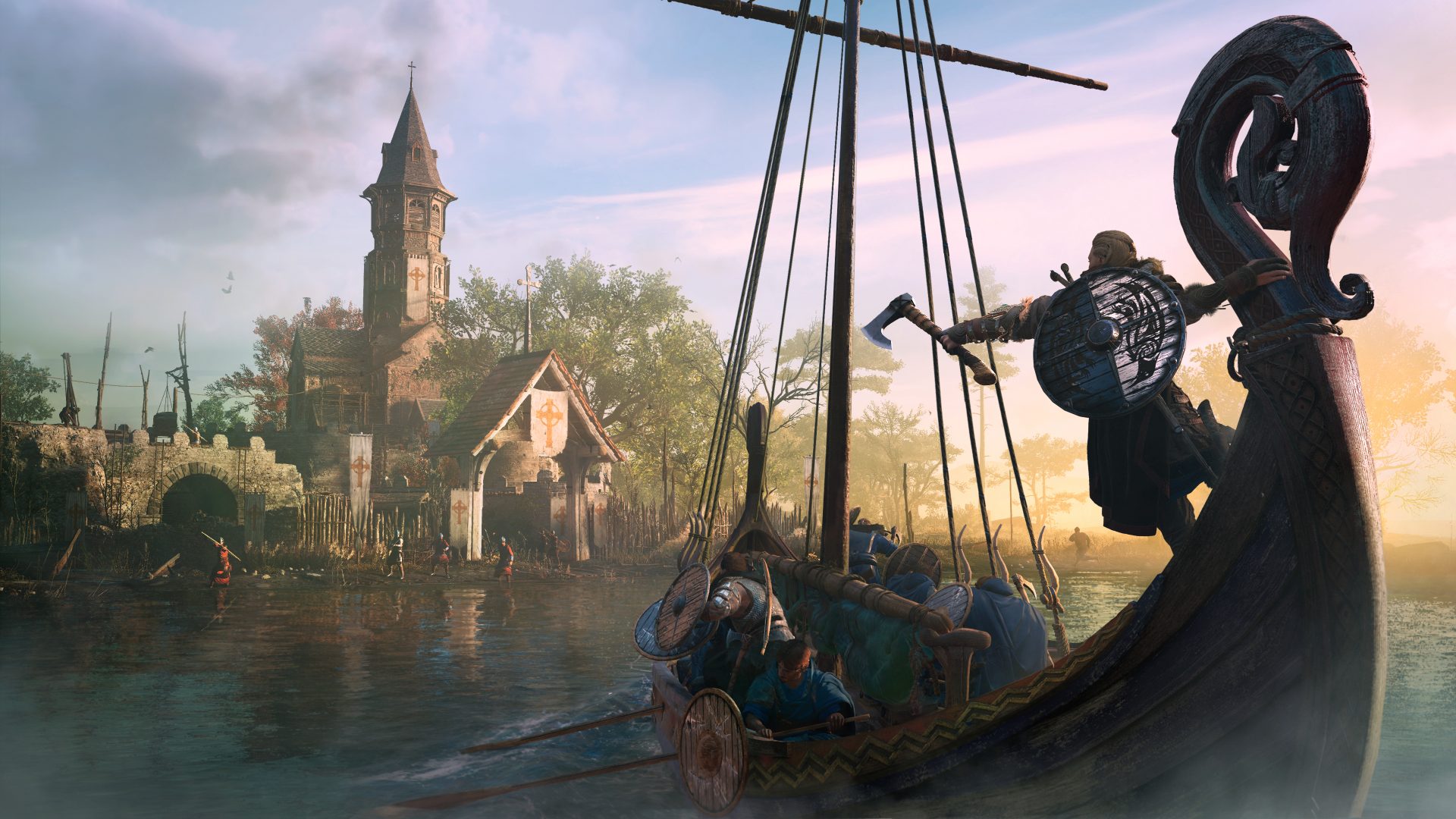 This time the white marker is a woman trapped at the top of a tower, pleading for a noble passerby to dispatch the contemptible blackguard barring the door.

“Sod this,” he says after I bloody his nose with the pommel of my axe, tearing off into the sunset. Turns out it was all a game; until I’d brought a knife to a play fight. I then join in with the ruse for a little while, beating up some actual goons who turn up to cause trouble, but it’s not long before I’m wandering off in search of another distraction along the riverbank.

One of the more surprising things about Assassin’s Creed Valhalla is its dedication to being balls out goofy at every opportunity – especially in the sidestory mini-quests.

At one point I scoff some mushrooms and get guided through a spirit journey by a harbor seal. Towards the end of my demo I collect some viper eggs for a woman lurking in the sewers beneath Tamworth. When she’s polished off a dozen she rips out a huge fart, causing green gas to spill out into the town. A heartwarming retelling of how modern-day Tamworth got its signature scent.

The silliness sloshes over into the main story as well, and gives the game as a whole a bit of a strange tone. One minute you’re shoving a poleaxe down someone’s throat, the next you’re trading rhyming insults with a stranger in a flyting match, or helping some wannabe raiders set their own house on fire to practise their pillaging.

It’s even in the cutscenes. For example when I finally reach the Viking siege camp outside Tamworth Fortress, I meet Ivarr, another Viking leader with a reputation for brutality.

He’s torturing prisoners: flogging them, blinding them, and forcing some to inflict the same on their comrades.

But his dialogue is filled with cheeky asides, and it’s quickly established that you’re meant to be friends. It’ll be interesting to see whether Valhalla pulls Eivor’s character closer towards either being the typical altruistic, errand-running do-gooder or all-out Viking bastard – but that doesn’t mean the dissonant parts aren’t engaging in isolation.

It might be that the setting felt like a better home for off-the-wall antics than the last couple of Assassin’s Creed games. The cold, heathered hills of England give a bleak tone to traversal, which works well with the mud and smoke-streaked grittiness of the grim combat. 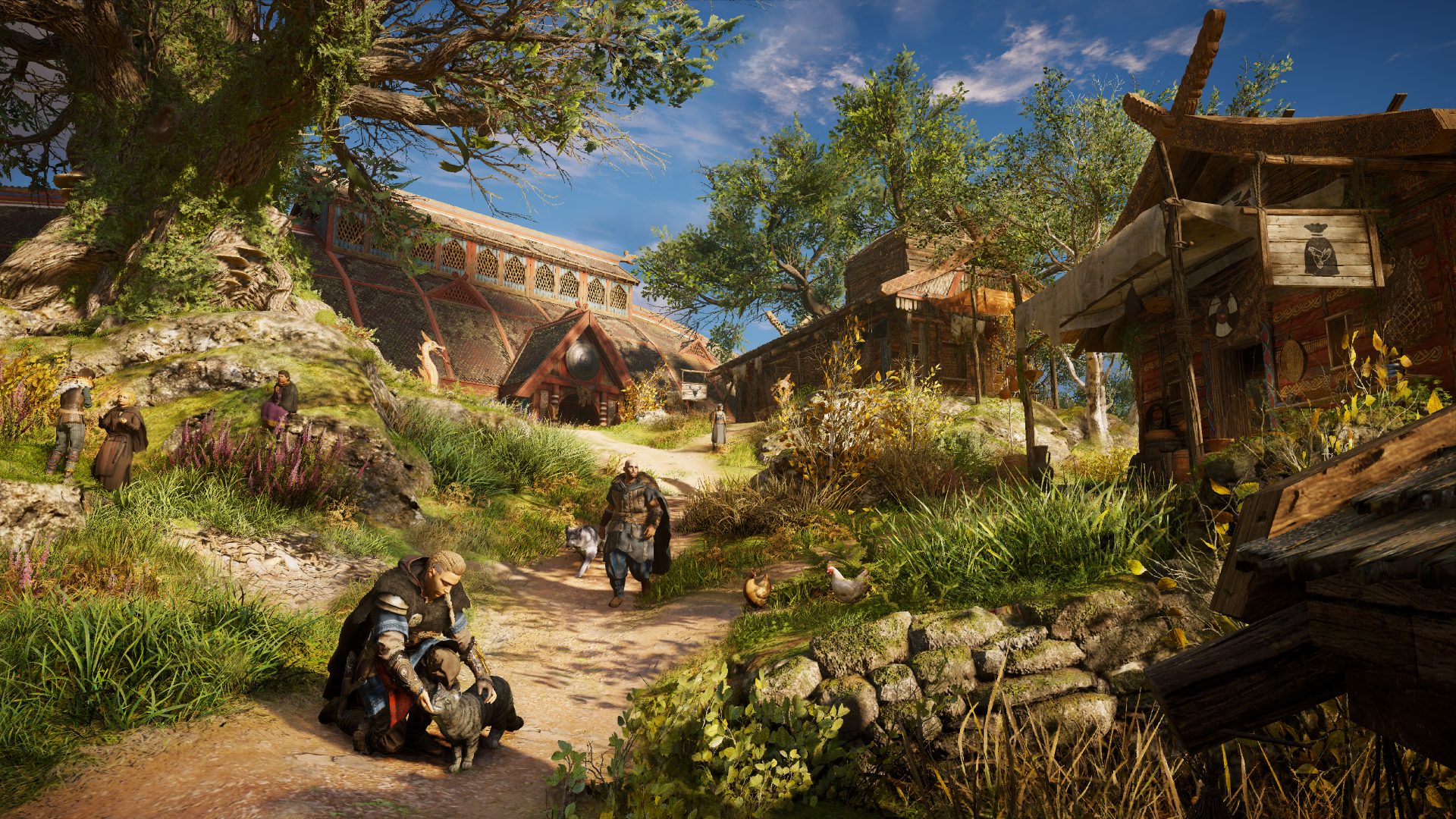 Assassin’s Creed Valhalla’s world is undoubtedly beautiful, but in a very different way to the desert vistas of Origins and the sun-kissed Peloponnese islands of Odyssey.

It’s a brilliant example of how much global illumination has come on in the last few years, and you don’t have to stretch your mind too far to imagine how a more sober tone in such chilly surroundings could have come across as a bit po-faced and joyless.

Coming off the wide, open seas of Odyssey, the exploration in Valhalla does feel a little limited by the setting however. England only has so many rivers, and they can only really run in a single stream, so you’re often galloping long distances on horseback.

And while I like the change to map markers, the low-rise architecture of the 9th century means the development team has made the clever choice to build networks of underground tunnels into many locations.

What this means though is that you’ll traipse over to something shiny you want to look at and find it’s under your feet, with no obvious direction to continue your search. While the breakable boards and secret passageways will no doubt be easier to spot the more you play, this does mean you’re spending a lot more time running around in circles than you’d like.

But outside of the standard Assassin’s Creed fare, there’s tons in Valhalla to keep you occupied. Building out your Ravensthorpe home with new shops and services is a welcome return and expansion of the Villa Auditore and homesteads from earlier games in the series.

While the dice game, Orlog, seems like Ubisoft Montreal’s best approximation of Gwent from The Witcher 3, with special god power totems to collect and diversify your strategies.

Assassin’s Creed Valhalla is torn between being the grittiest and goofiest entry in the series yet. But I’m not sure it would work as well any other way.