Levelling up in Genshin Impact can be confusing. Grinding world mobs only grants you a paltry amount of experience points, so you need to stockpile EXP materials to advance your characters.

Then, once you’ve raised your level high enough to reach the first soft cap of Level 20, Ascension Materials come into play.

After you reach a certain level in Genshin Impact, you need Ascension Materials to continue your progression. These can be rare drops and pickups from the open world, or specific crystals related to the elemental type of your character.

Here’s a little about how levelling up works in Genshin Impact, as well as where you can find all of the basic Ascension Materials.

How to level up in Genshin Impact

As we mentioned, grinding through normal enemies isn’t going to get you anywhere fast.

These are found in world chests, received as rewards for completing quests and daily bounties, and grabbed from Ley Line Outcrop – Blossom of Revelations. 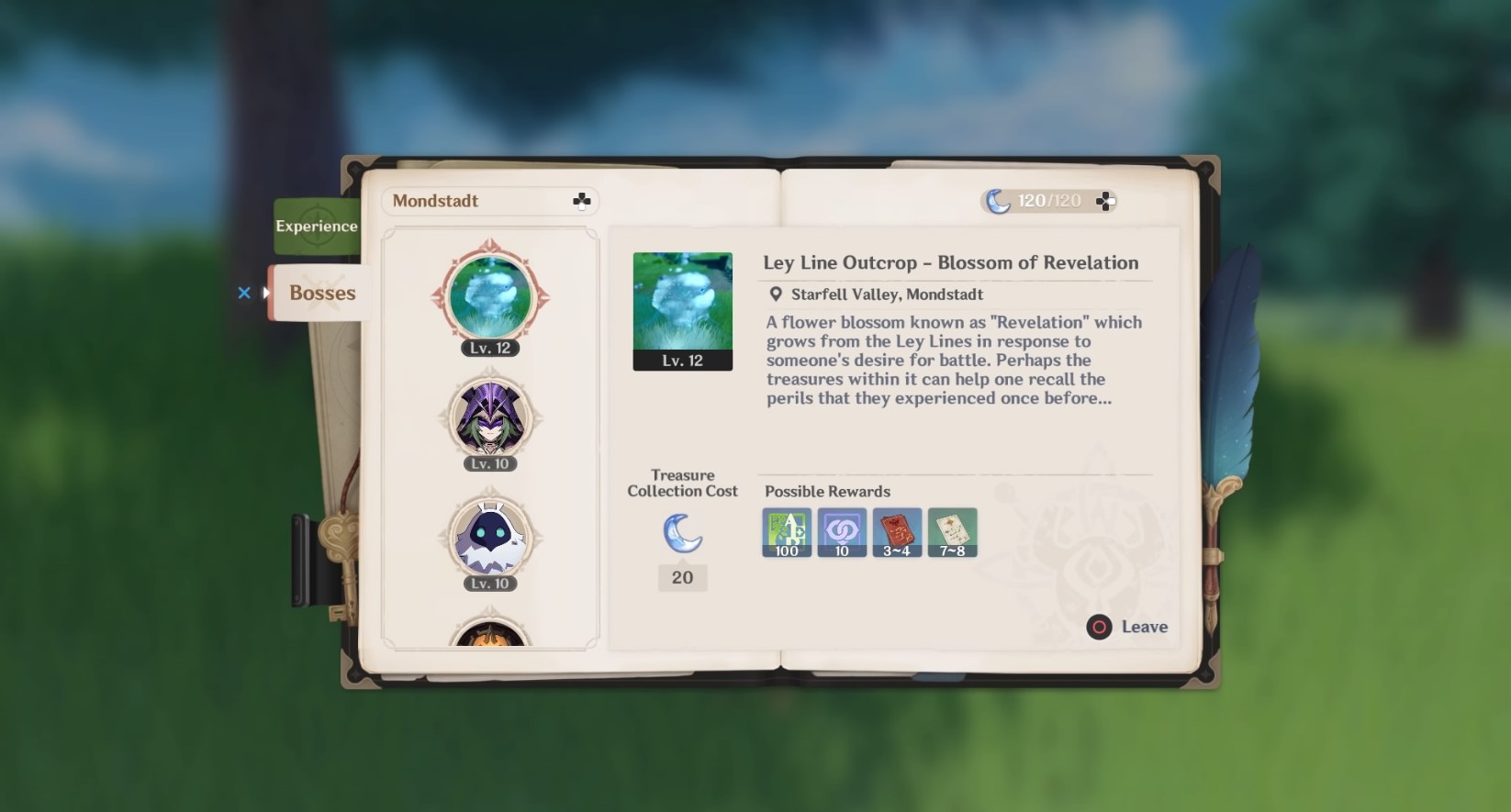 They give the following amount of Bonus EXP per item:

While they’re plenty numerous at the beginning of the game, you don’t want to dish them out instantly to all of your characters – otherwise you’ll find yourself stretched too thinly as you get towards higher levels.

Instead focus on creating a party of four characters you like, rather than pushing 9 or 10 characters to the soft cap straight away.

Then once you hit Level 20, you’ll reach the Genshin Impact’s first real barrier to progression.

After this level, and every 20 levels thereafter, you’ll need to imbue a character with particular Ascension Materials based on their elemental type.

Eventually, this will unlock greater access to their Talents (skills) and other bonuses too.

Ascension materials usually consist of an elemental crystal, an item you pick up from the open world, and an item dropped by an enemy.

Where to find Ascension Materials in Genshin Impact

While you’ll have to wait until Adventure Rank 15 to get the right Ascension Materials for the Protagonist character, there are many different ways to lay your hands on the right items for the rest of your party.

Brilliant Diamond Sliver – The protagonist’s Ascension Material jewel is dished out at the Adventurer’s Guild counter once you reach Adventure Rank 15.

Speak to Katheryne and ask to claim your Adventure Rank Rewards. Along with some money and other items, you’ll receive the Brilliant Diamond Sliver. 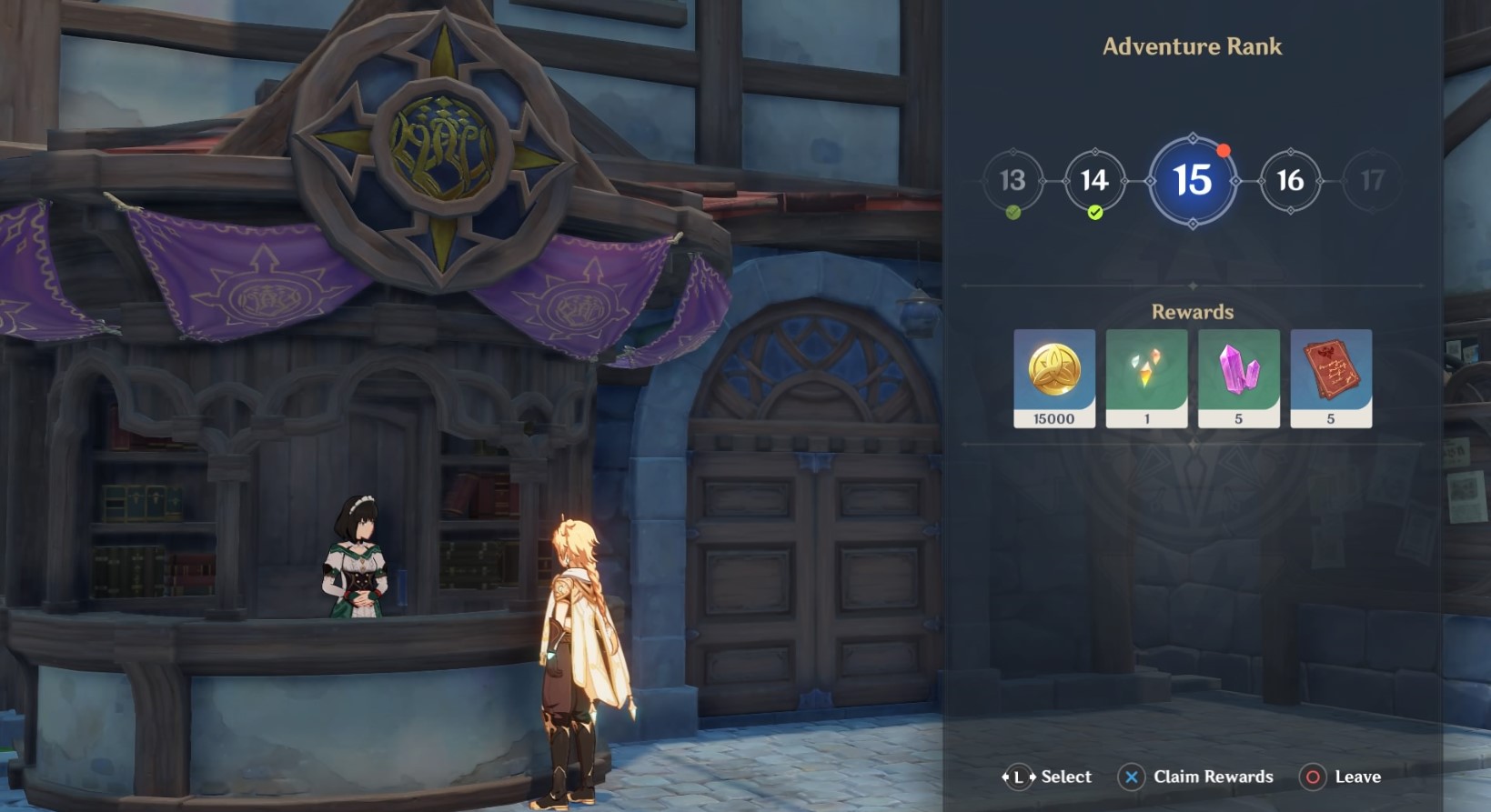 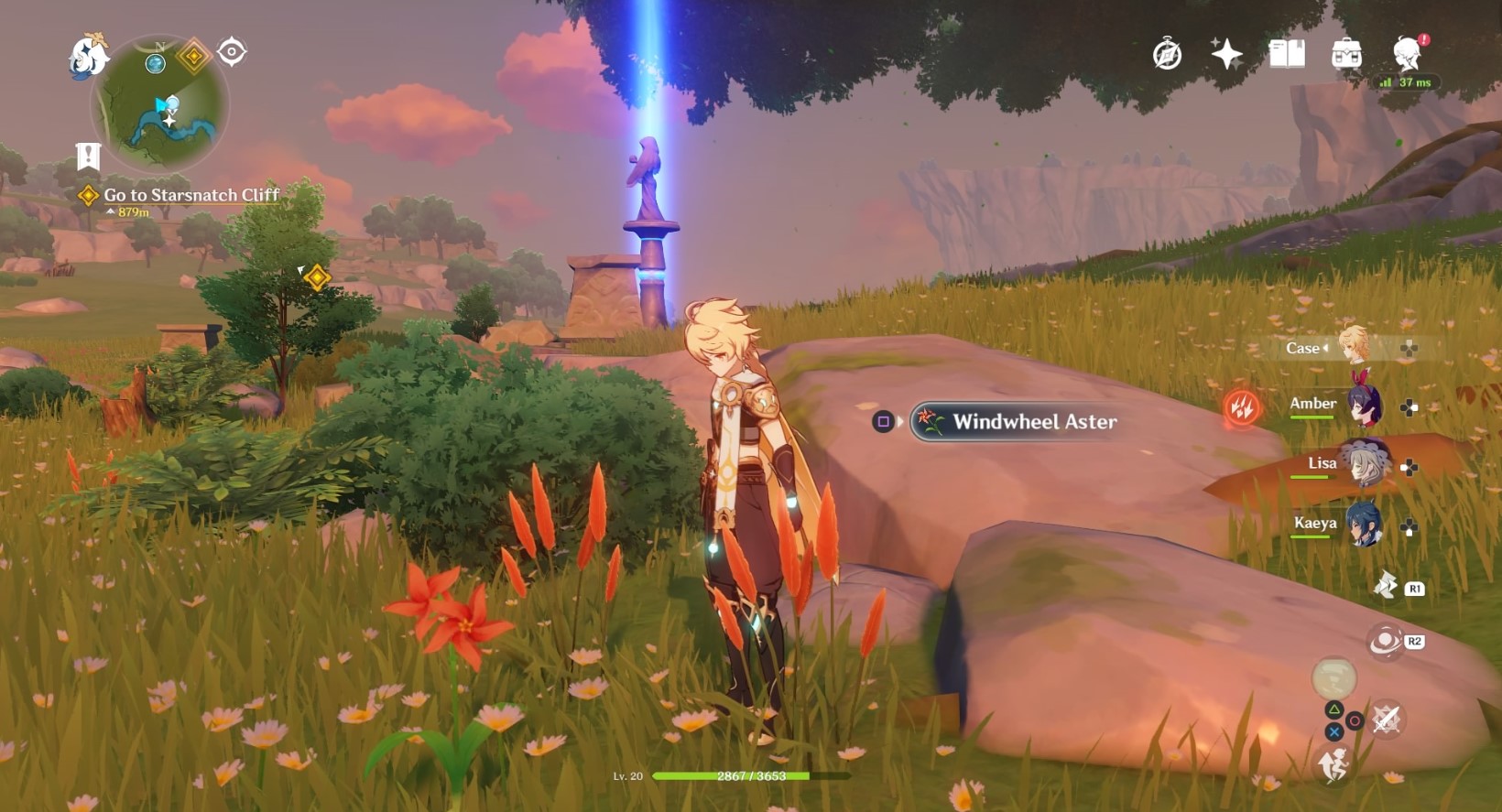 Search the rocky ledges around the Statue of the Seven and you should be able to find multiple clumps of Windwheel Aster. These respawn over time as well, so return often if you need to grab more. 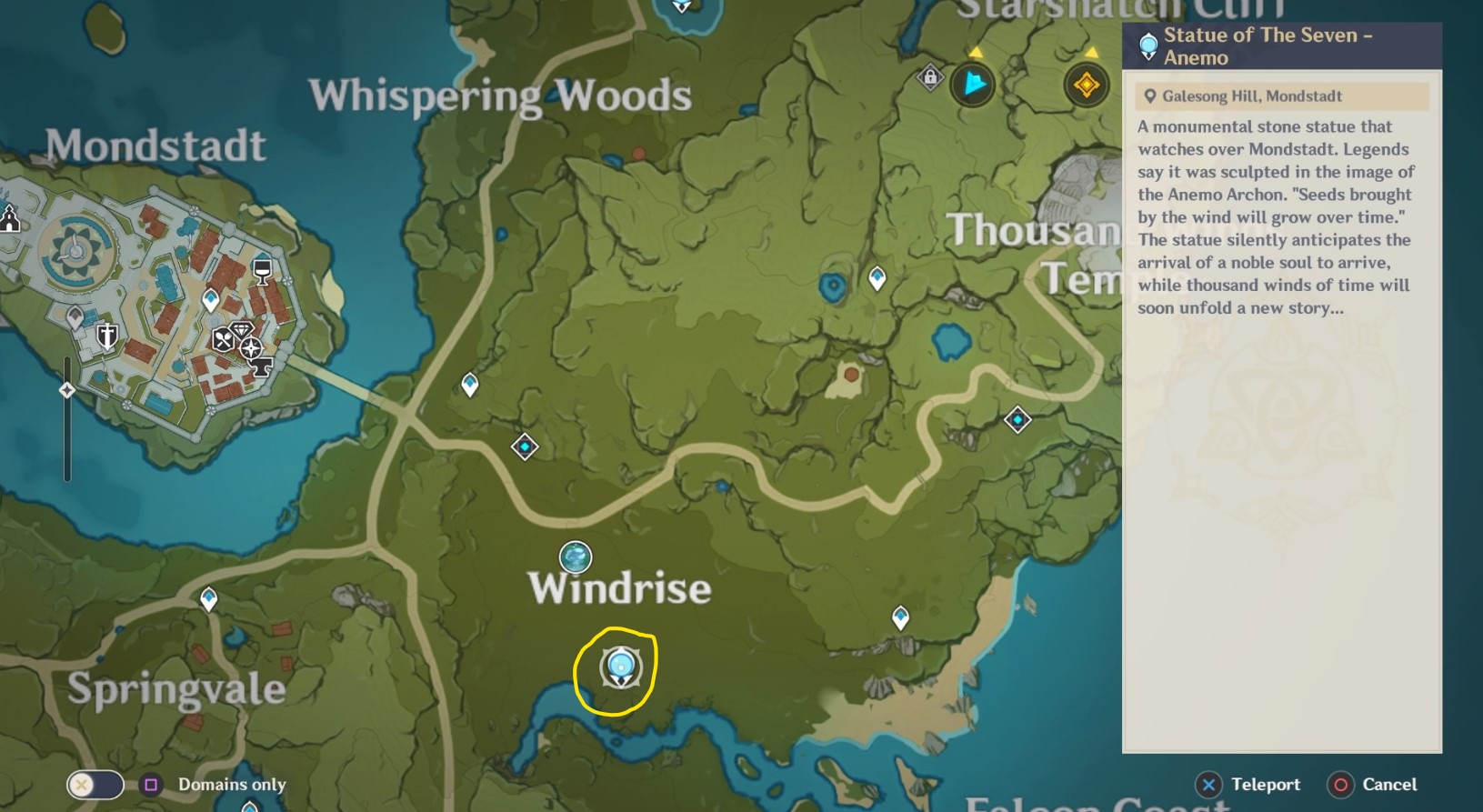 Damaged Mask – Damaged Masks are found by defeating melee Hillichurls. You can stumble across many of their camps around the periphery of Mondstadt.

The ones you’re looking for are the basic club-wielding enemies, or those with shields – not the crossbow-wielding or larger ones.

Agnidus Agate Sliver – There are a couple of ways to lay your hands on Amber’s Ascension Material jewel.

The first is as a random reward for completing your daily Adventurer’s Guild Bounties. Tick all 4 off of your list, and you’ll get a random Ascension Material jewel as part of your payment.

The second easy way is to buy it from the Souvenir Shop in Mondstadt: With Wind Comes Glory. Here you can buy many useful items in exchange for Anemo Sigils which you collect from world chests on your travels. 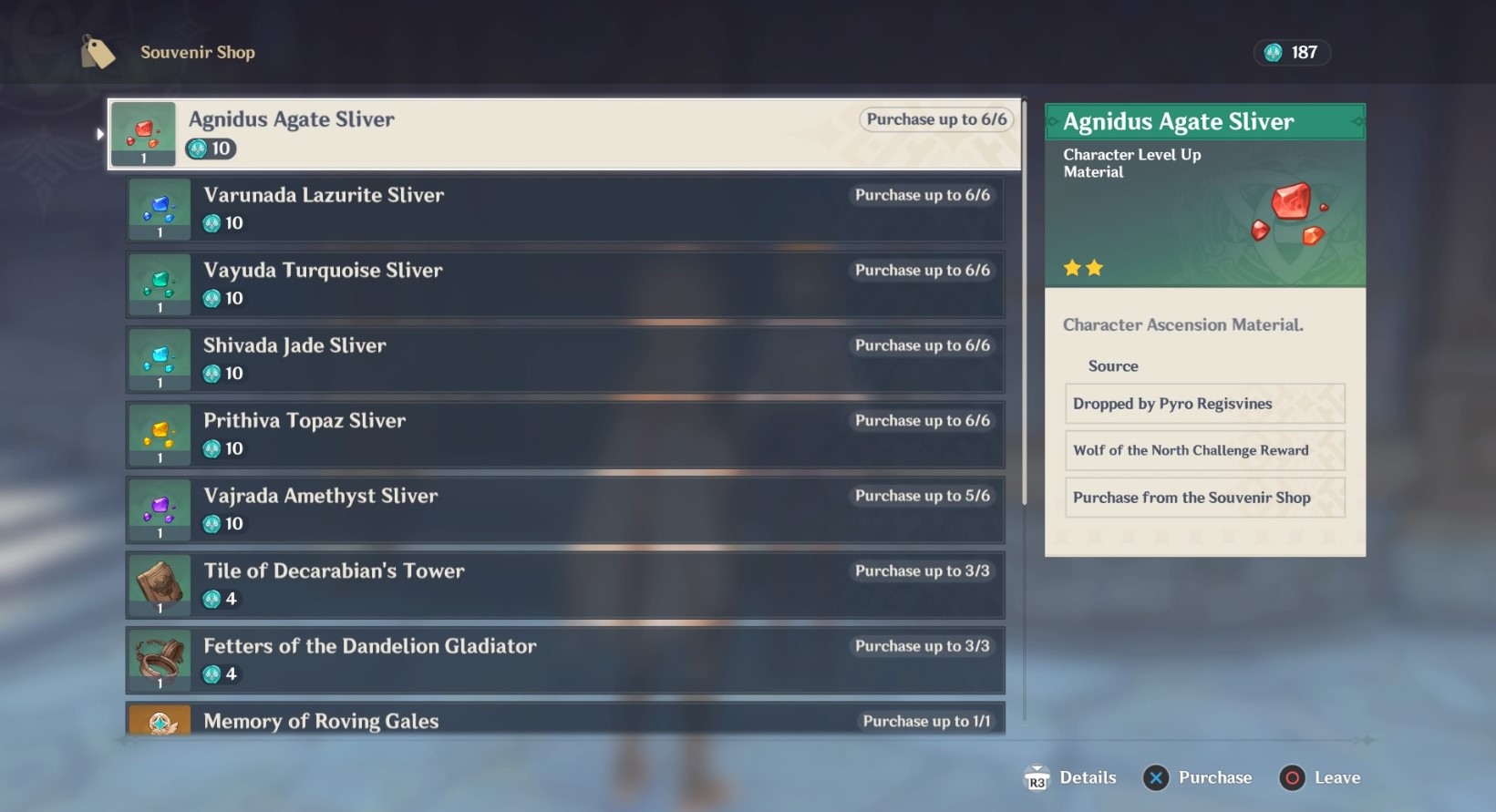 You can pick up the Agnidus Agate Sliver for a pretty measly 10 Sigils.

Small Lamp Grass – The in-game tip says you can find Small Lamp Grass in the open world at night, but you can actually pick it up during any time of day – it just doesn’t glow. 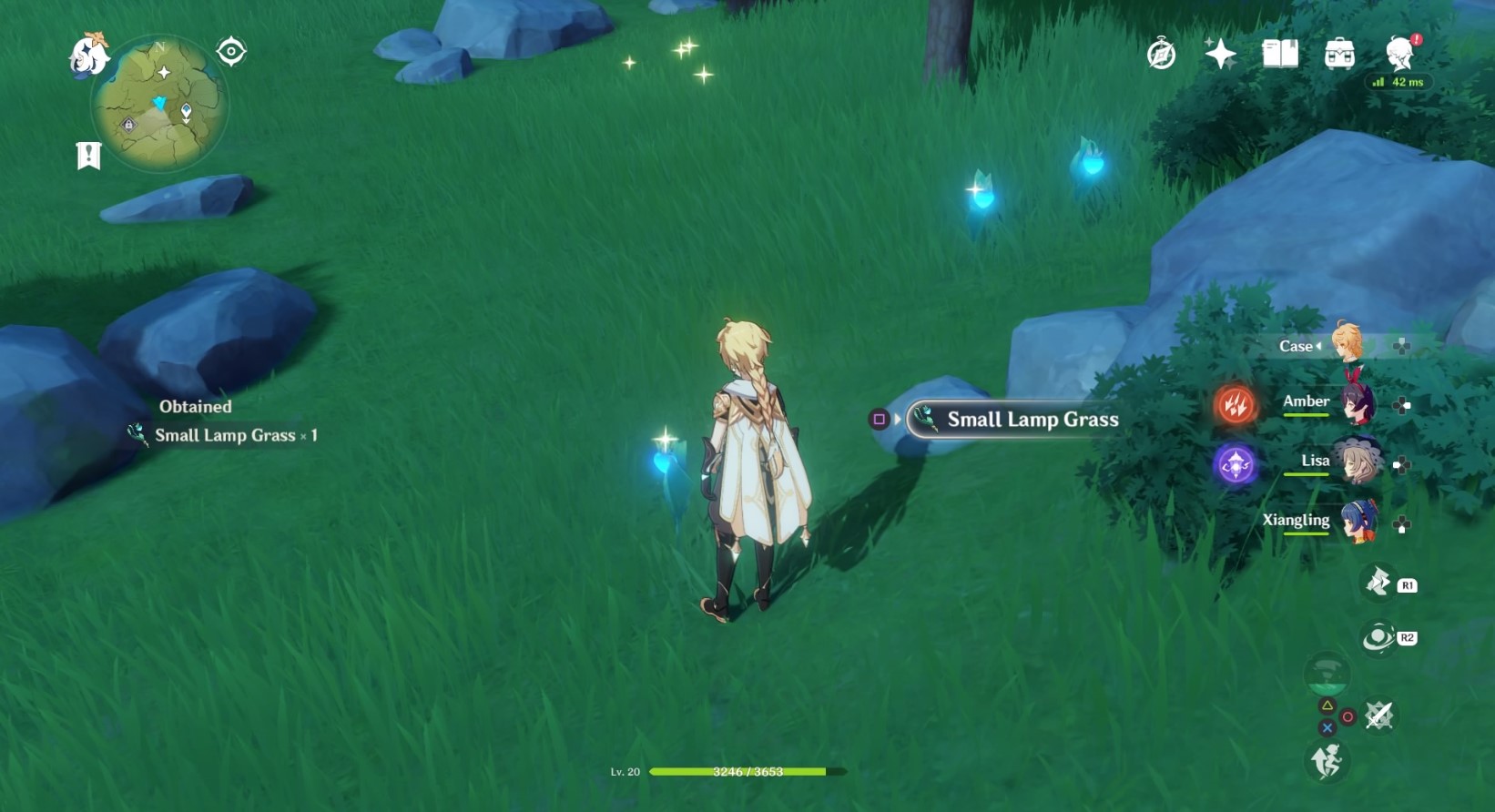 To find some, head to the Whispering Woods just outside Mondstadt. You’re looking for a green and purple plant that usually spawns in clusters of about 3.

Firm Arrowhead – Like the Damaged Mask, you can find Firm Arrowheads by defeating Hillichurls. But it’s the crossbow-wielding variety you need this time.

If you’re struggling, you can always just buy some from the Paimon’s Bargains section of the shop, where you can exchange some for Stardust. 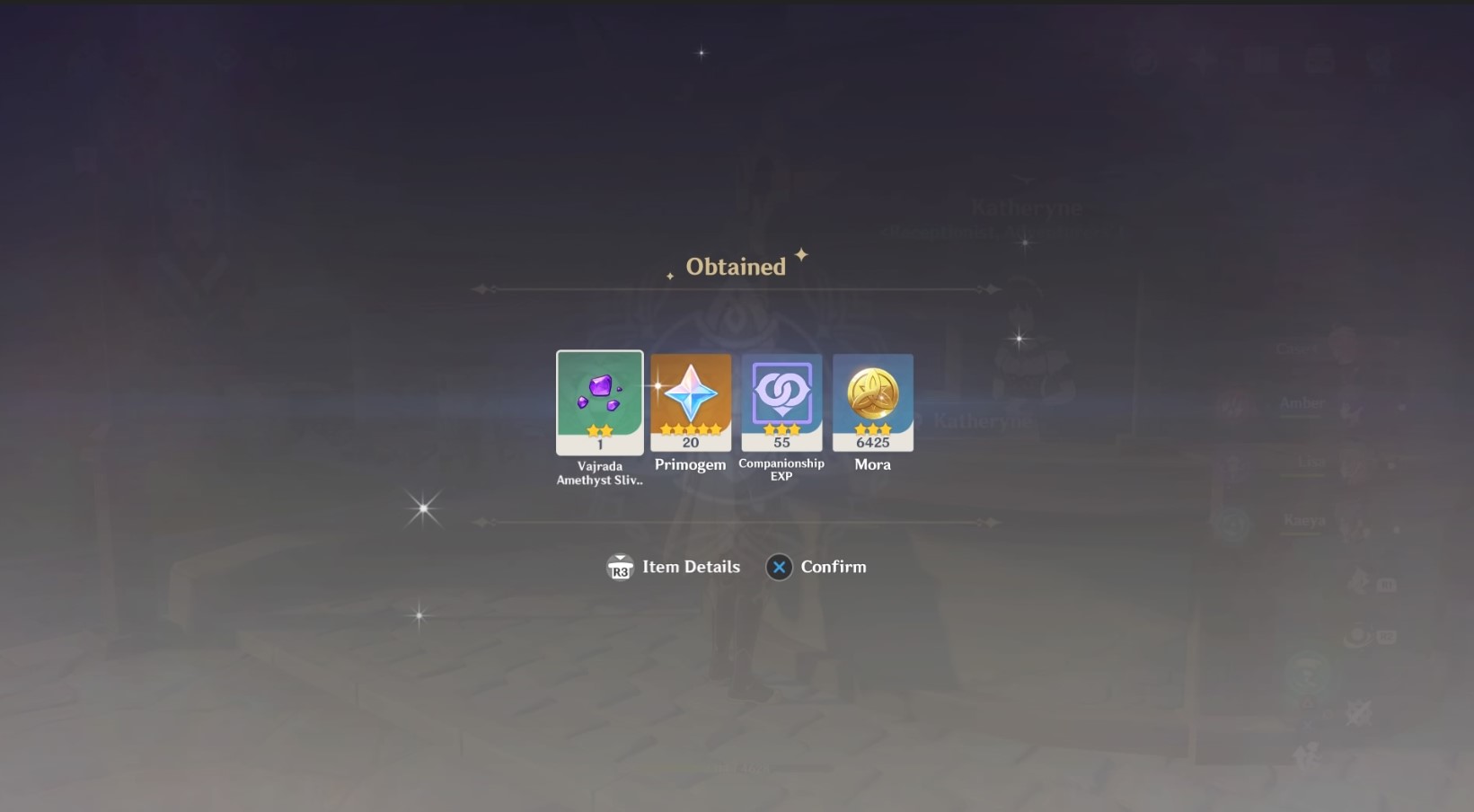 Valberry – Of the basic plants you need to find for ascension, the Valberry is probably the toughest to pin down.

To find some, head to the Stormbearer Mountains to the northeast of Mondstadt. Here, you’re looking for a small green and red plant – you get 4 Valberry at a time. 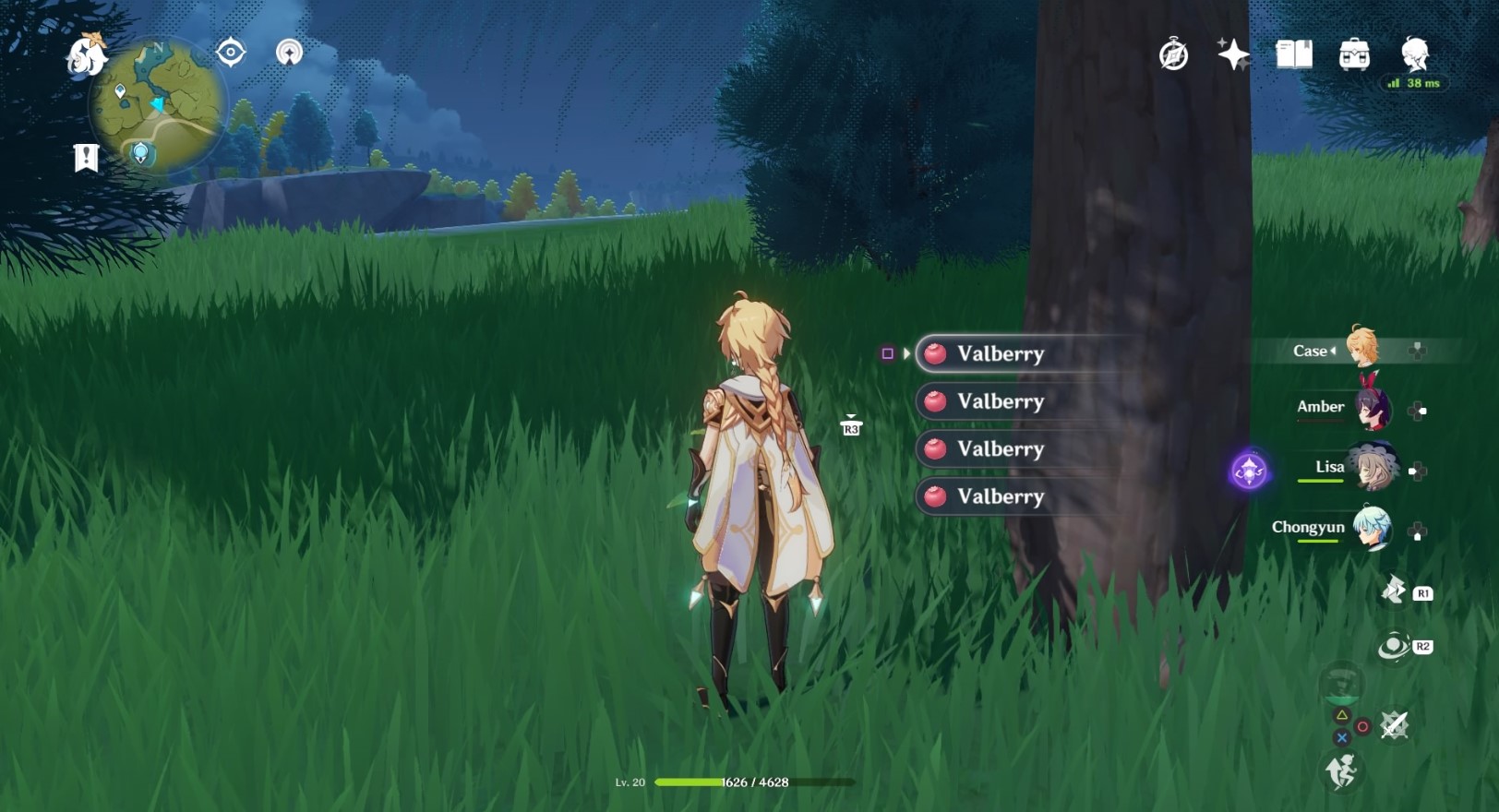 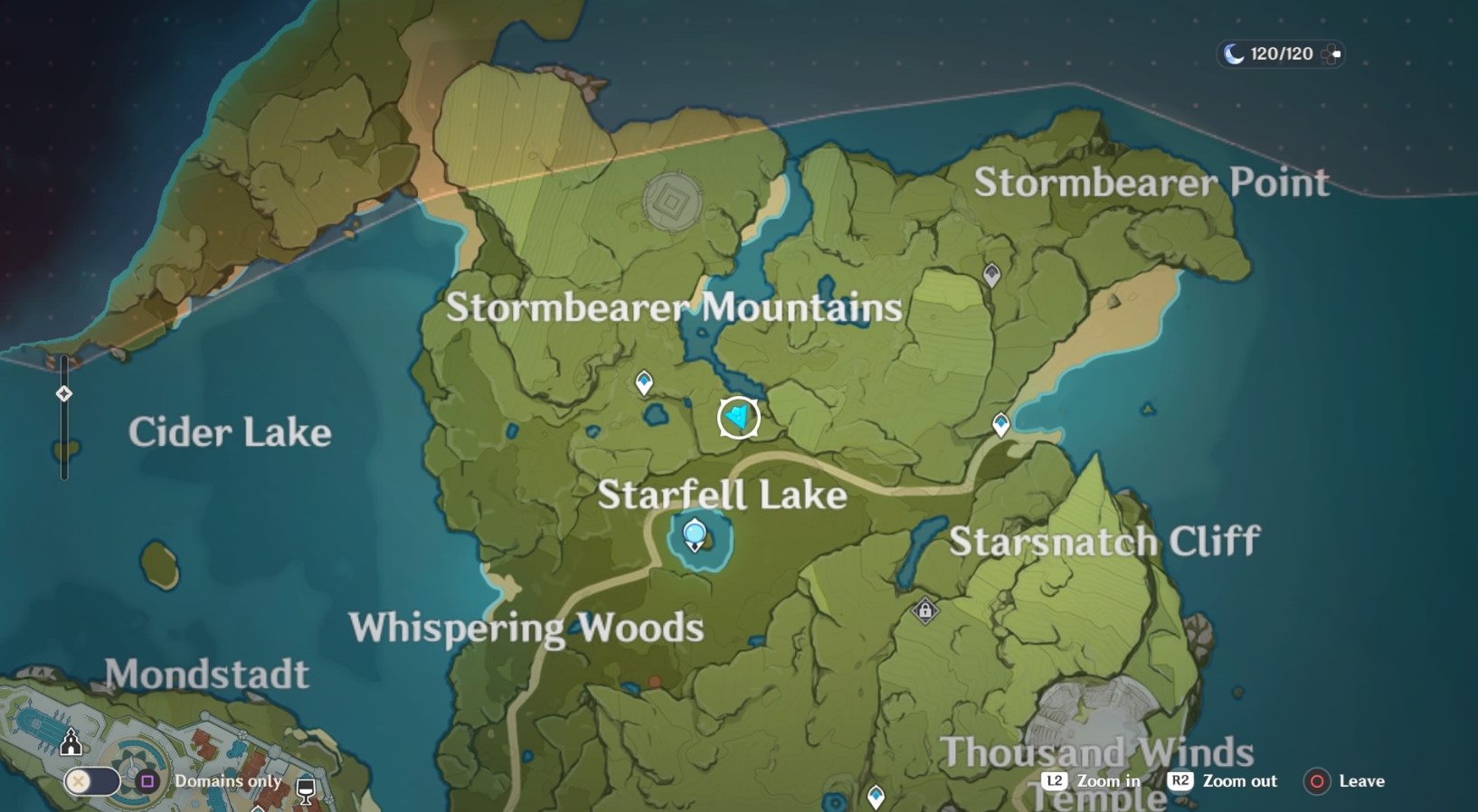 Slime Condensate – You probably have plenty of Slime Condensate in your inventory, but it’s obtained by defeating the many different kinds of slimes you face in Genshin Impact.

If you need some in a hurry, you can usually find cryo and water slimes near the lakes, rivers, and sea around Mondstadt (but not usually in the city moat).

However, you can also come across one by completing Kaeya’s Secret Pirate Treasure quest at the Knights of Favonius HQ in the Mondstadt.

Calla Lily – In Genshin Impact, the Calla Lily loves water. One easy place to collect as many as you need is the teleport point called Windwail Highland in Springvale, just to the south of Mondstand.

You can find plenty of Calla Lily around the pond here.

However, if you grind out a few Ley Line Outcrops, you can rarely face a group of Treasure Hoarders, who will then drop insignia.

Alternatively, you can complete Kaeya’s Secret Pirate Treasure quest to face some.

Or you can purchase them from the Paimon’s Bargains section of the Shop.

Dandelion Seed – One other items we’ve seen people having trouble with is Dandelion Seeds. They spawn pretty often around Mondstadt, however, you need to use an Anemo elemental ability to blow them off their stalk. This is easy to do with the protagonist character’s windblade.

I’ve seen them often right next to the gates of Mondstadt. 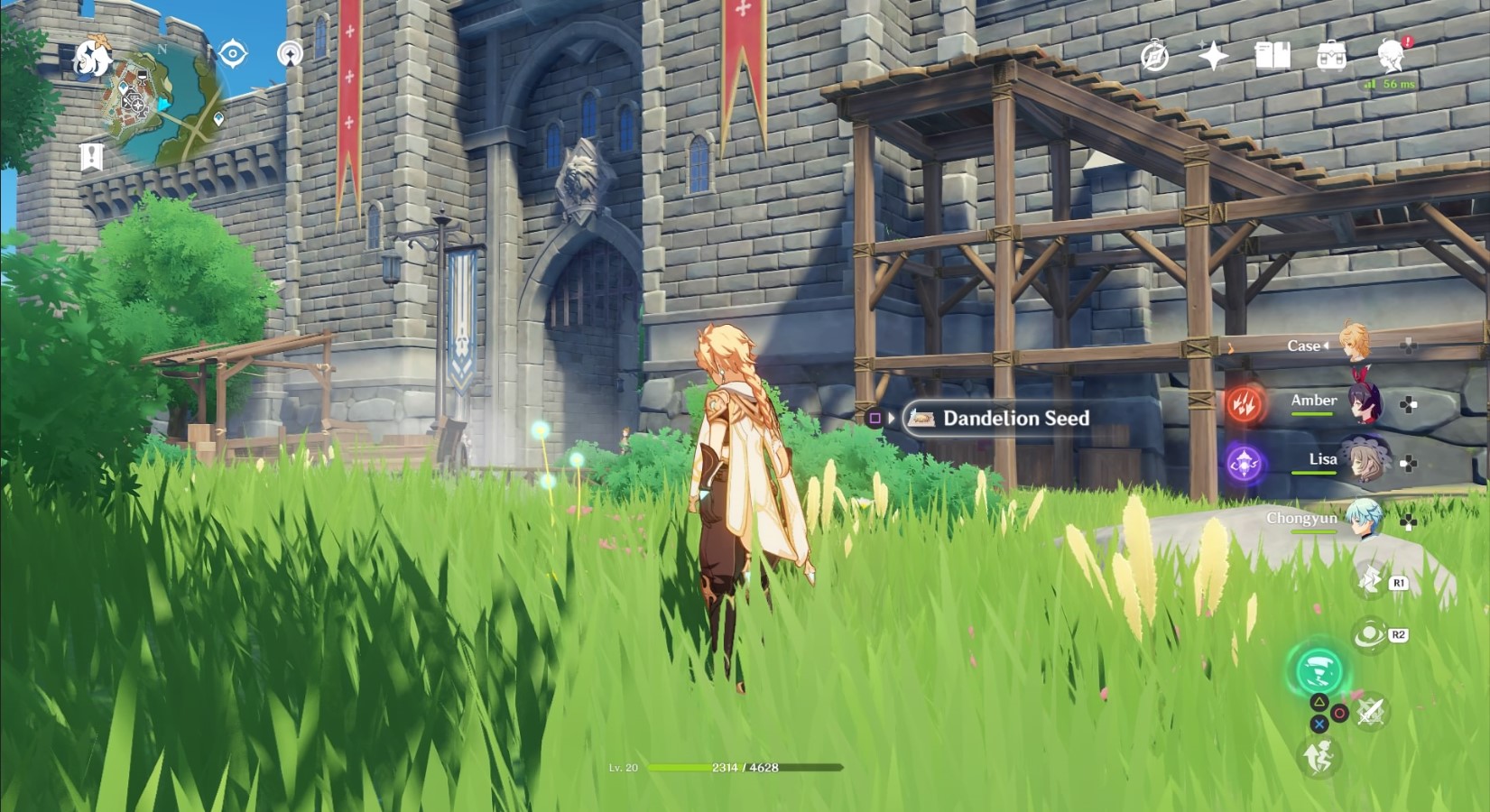 If you’re past all of the basic Ascensions, then you might need rarer materials. Rather than struggle to find these out in the open world, one easy way to get higher tier Ascension jewels and other materials is to craft them.

Visit Timaeus at the top of Mondstadt main street and you’ll be able to combine weaker versions of materials into the rarer and more powerful counterparts.

As well as this, you can always purchase the materials in the Paimon’s Bargains area of the shop for both Stardust and Starglitter.

For more on Genshin Impact, here’s how cooking and processing ingredients works.