The final major update for Monster Hunter World: Iceborne is here and you’ll be able to face off against the absolute unit, Fatalis.

Monster Hunter fans will remember Fatalis from the PlayStation 2 title, but for those of you not in the know, here’s a quick recap: Fatalis is a black elder dragon, famed for its intelligence and power and, as such, is pretty hard to beat.

If you can team up with a few pals for this fight you’ll stand a better chance of beating it the first time, otherwise, you’ll want to bring as many healing items as you can carry. You’ll need to be Master Rank Level 24 or higher to start The Black Dragon mission and if you faint five times, the fight is over.

He’s holed up in Castle Schrade and deals Dragon and Fire elemental damage, unleashing moves like Dragonblight and Fireblight. If you manage to defeat him, you’ll be able to carve quite a lot from Fatalis, such as Shell, Scales, Eyes and Horn.

As usual, there’s an Alpha and Beta set of armour, as well as a cool Fatalis Palico skin. The quest to face Fatalis will be available after finishing the main Iceborne campaign and completing the Alatreon investigation. 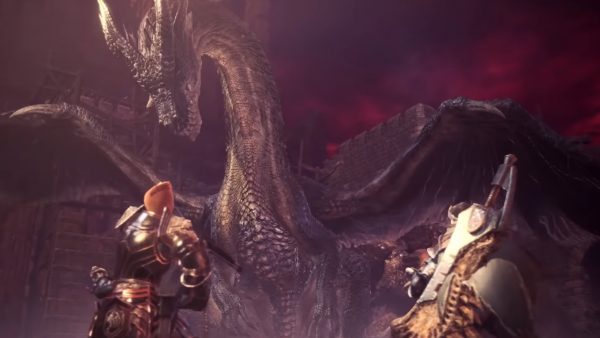 How to obtain The Black Dragon quest

Once you begin the quest and arrive at Castle Schrade, you’ll want to make use of the Dragonator, cannons and other ballistae around the area in the fight against Fatalis. You’ll be teaming up with the General, a new character in Iceborne, and you’ll also see the return of the Excitable A-Lister.

To get started, speak with the Excitable A-Lister. You’ll get a Special Assignment prompt when you log in, so head to the messageboard to find him under a purple exclamation mark. He’ll casually suggest heading back to the Old World for a bit, but first, you need to visit the Field Team leader for a special mission.

You’ll need to hunt an Alatreon in the Secluded Valley, so check out our Alatreon guide here for tips on how to defeat it. 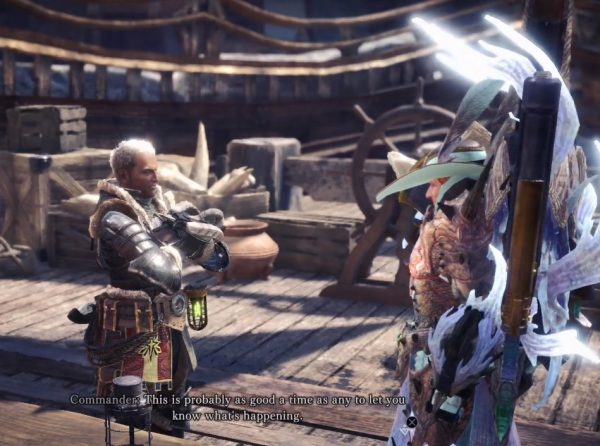 Afterwards, you’ll be able to speak to the Commander about your fight and he’ll tell you about the guild’s investigation. The General will soon show up to explain a bit more about weird stuff happening, like earthquakes, fires and elder dragons disappearing, all pointing towards the return of Fatalis.

Eventually, you’ll get The Black Dragon mission. You can bring a few friends along or try it solo, it’s up to you. Either way, you’re off to Castle Schrade. You might want to equip some top tier gear that does damage against Dragons before you accept the quest, as you’re launched into the fight immediately.

What is Fatalis weak to?

Ironically, Fatalis is weak to Fire and Dragon elements, so equip these where you can.

There’s a pattern to the fight, which makes it a little easier to get to grips with. He does a fire spread move that, while devastating if you don’t get out the way in time, is completely avoidable if you watch for it coming – notably, some fire starts pouring from his mouth.

But it’s important to remember that he can also one-shot you and melt any cover you’re standing under, so don’t get complacent.

Remember to use the various ballistae dotted around to inflict further damage, especially if you’re playing as part of a group. Stay behind him if you can and hack at his tail and hind legs. You’ll have a 30-minute time limit to defeat Fatalis which might not seem long enough once the fight begins. Dual Blades are particularly effective against Fatalis, so don’t be afraid to whip ’em out for the big fight. 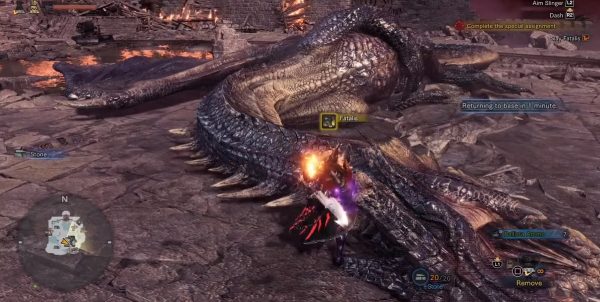 He can stay relatively close to the ground, which lets you get a good shot at his head but watch out for him lunging forward and unleashing that devastating fire at you. If you focus on his head, it’ll weaken the fire damage Fatalis unleashes, so use the time he spends close to the ground wisely.

You can sue the cave you hid in during the cutscene throughout the fight, too, so you don’t need to be on the offensive 100% of the time.

You’ll get prompts here and there to use the barricade to protect you from extremely powerful fire attacks, so listen to the Commander when he shouts at you. There are three phases to this fight, with his AOE and attack power getting stronger each time. When you get a prompt to do something, run fast behind the gate.

In the third phase, being close to Fatalis grants you some immunity from his fire attack, so when he attacks the aforementioned gate, run at him and heal teammates as you go. In his final form, break his head twice to ensure he’ll meet a timely end.

Apart from that, it’s really just using the best gear you have to your advantage. It’ll likely take you majority of the time limit to defeat him, so keep hacking at his legs and head when he’s standing still go inflict as much damage as you can.

You’ll unlock Fade to Black after you’ve defeated him once, which is the same fight with slightly different rules – you can only faint three times. The rewards are better, but it’s still a tough fight. 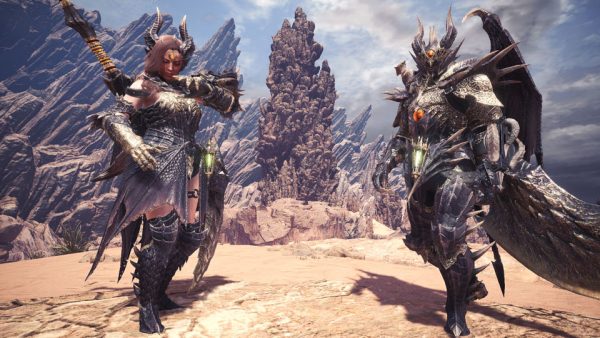 Once Fatalis is down, you can collect the Fatalis Shard, Cortex. Fellwing and Pectus from him, as well as get a bunch of rewards once the Quest Complete message appears, like materials and a few Level 4 Jewels. Here’s what you’re likely to get, though you may get different rolls:

There’s a lot of lore surrounding Fatalis armour that you’ll end up cursed, your hands might fall off or you’ll hear a lot of screaming, but hey – you’ll look fuckin’ mint while all that’s going on.

The Fatalis armour is ridiculously OP but hey, that’s why it’s endgame material. The gauntlets alone give you +100 Health and Stamina at the start of a quest or after fainting, so you’re practically invincible at this point. There’s also Inheritence which unlocks every skill level cap for the skill secrets, so you should definitely face Fatalis off.

Each piece of Fatalis armour comes with three four-slots, -1 vs Fire, 2 vs Thunder and Water and -4 vs Dragon. There’s also the Fatalis weapons, which come with extremely high damage, Sharpness and Dragon element.

You’ll be able to forge the likes of the Fatalis Blade, Sword and Shield and Dual Blades, so have at it and create an insanely wild build. 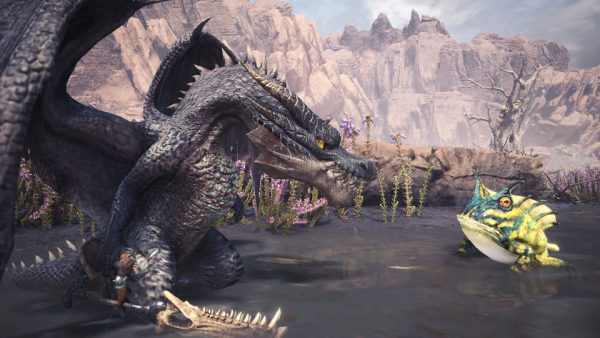