The Call of Duty: Modern Warfare and Warzone Season 6 patch is out now, and features playlist updates, bug fixes, map changes, new operators, and more besides.

Infinity Ward has run through the patch – which weighs in at an impressive 20 GB – over on the game’s official site, highlighting just what’s going to be different for anyone booting up the game today.

Yesterday, we saw developer Infinity Ward offer up a pre-load of the massive patch to players on PlayStation 4. PC and Xbox users have to download the huge update today, though, if they want to get online and play.

In terms of the big changes that have arrived in the game with the new Season, the subway system has been unlocked on the Warzone map, allowing you to fast travel and opening up new areas to engage in skirmishes with your fellow combatants.

Two new operators, Farah and Nikolai “bring the fight underground” and can be unlocked via Battle Pass, too. 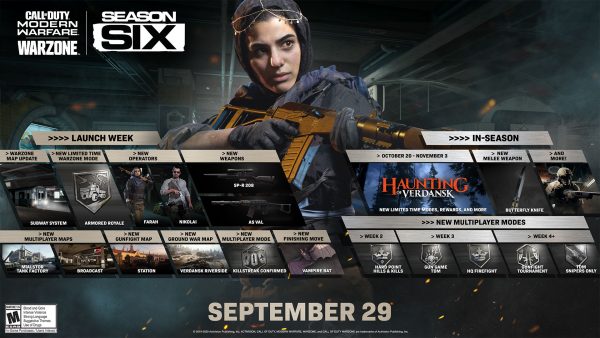 Here are the top-line changes that you’re going to notice in-game:

And you can see the rest of the patch notes at the link.