The 11th course in Super Mario 64 is Wet-Dry World, and for my money, this is where this game really hits its stride.

While many of the levels in Mario 64 so far have been good, this level is the first of a back-half streak that shows a real confidence with this Mario team working to create a 3D game. It has a unique mechanic – raising and lowering water levels. While you can raise and lower the water inside the stage with special switches, keep in mind that you can change the water height on spawn by the height you jump into the painting – a high, medium or low jump determining the starting water level.

The painting is on the upper floors, and features a picture of a water spider enemy that you’ll also find in the level. 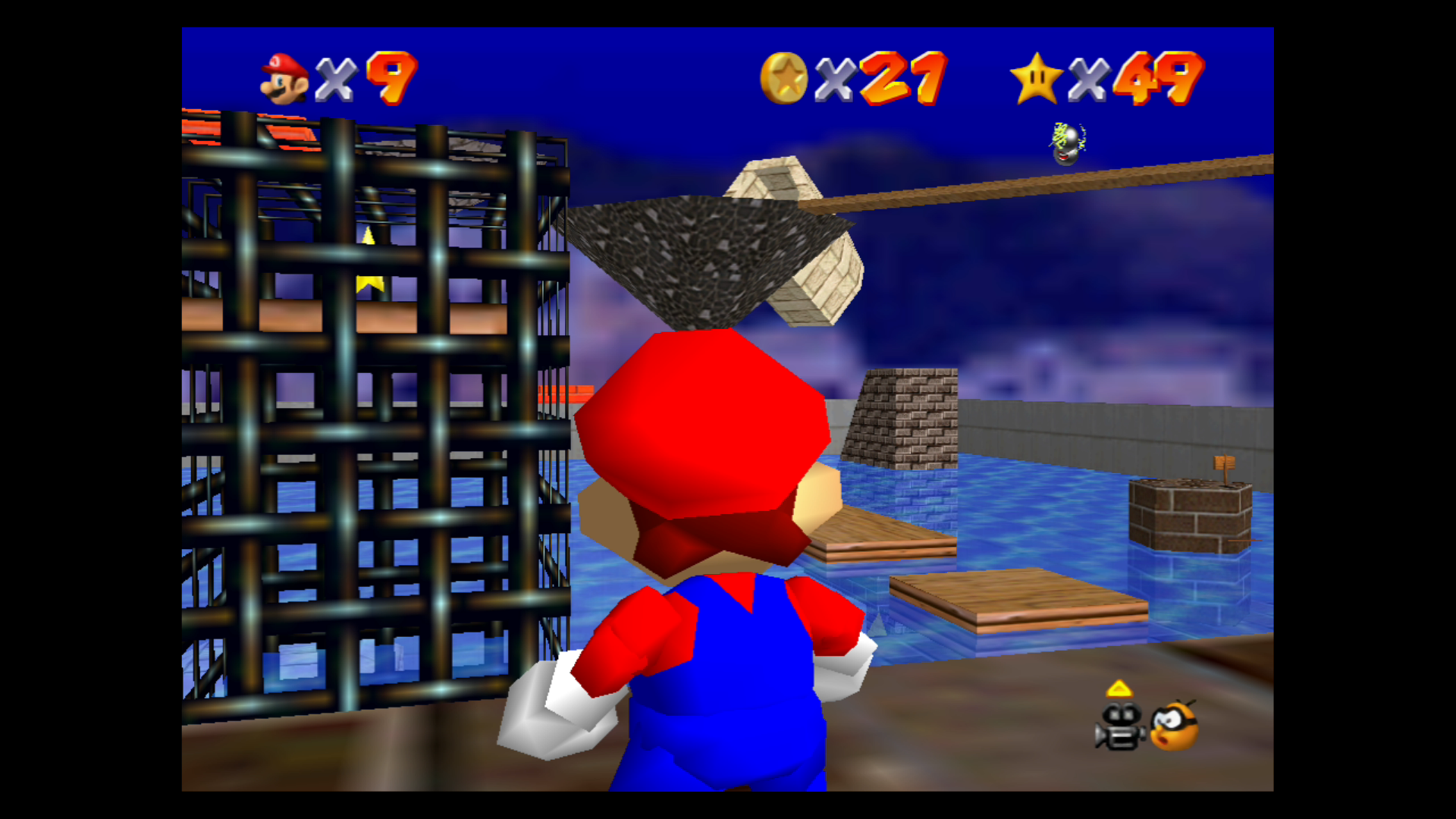 There’s a legitimate way to do this and a cheap way. The legitimate way is to use the arrow platforms in the area of the stage where you spawn to get across a gap to a yellow box which contains the star. What you can also do, however, is go to the 45-degree angle slope on your right when you start the level and hit the switch there to raise the water to its highest level, then just swim over to the box. It’s fiddly to hit the box like this to open it, but it’s totally doable.

This one is largely a platforming challenge; you simply need to get to the highest areas of the level, and do some tight jumps and tightrope walks across wooden planks in order to reach a yellow ! box which contains the power star. It is, of course, slap bang in the middle of the highest island in this stage.

This star wants you to find five secrets in the level, all of which are hidden in and around certain objects. Each time you find one, a number will appear telling you how many you’ve found – like with red coins. There’s a number of ways to get these with various tricks, including raising and lowering the water level – we’ll leave that up to you. They can be found in any order, but they are as follows:

This one has been staring at us since we first arrived in the stage; it’s the one inside the gauge, up high. You’ll need to lower the water level to ground level, then smash the block at the base of the cage. Now you need to get to the top of the stage, but without changing the water level. Use this by going around the corner and using the enemy that can toss you to throw you up a level – and then again. This can be tricky. When on the top level, press the ! switch to make steps appear to the top of the cage.

Now, the wooden platform in the cage is actually in two halves – the one the star is on, and the other, which is actually secretly an elevator. As soon as you touch it, it’ll start heading down. Touch it, drop off the edge, butt stomp to avoid fall damage, run inside the cage which you earlier opened, then when the elevator gets to the bottom, quickly jump onto it before it rises back up. Then it’ll raise you back to the star.

Wet-Dry World Star 5: Go to Town for the Red Coins

It’s time to collect all the red coins again. Have you noticed in the corner of the level there’s a tall grate? Use the cannon to launch into it, then swim through the underwater passageway to find a little hidden down! There are 8 red coins hidden around here. Once you’re actually in the town, they’re not difficult to find – just use the features of the level. Some are inside breakable boxes, some are high on top of building roofs, and so on.

Star 6 requires us to return to the town again – so use the cannon, get into the big grate, and swim through to the town. These time you’ll need the Vanish Cap. First, you need to press a ! Switch that’s hidden behind a house in the city, then grab the Vanish Cap and use it to get inside the grate in the corner of the town area. Once inside the grate, clamber up to the star using the temporarily spawned blocks. Alternatively, you could wait for the Vanish Cap to expire and then wall jump up the grate.

It wouldn’t be a Mario 64 stage without a collect 100 coins secret star, of course – and Wet-Dry World isn’t so bad. It had over 150 coins in total, including 6 blue coins. The spider enemies drop 3 coins a piece, remember – but just the yellow coins out in the level alone should get you to your required total.

With Wet-Dry World down the drain, your next destination is Tall, Tall Mountain!