We’re now into double digits, and course 10 of Super Mario 64 is another snow one – found on the upper levels of the castle.

To reach Snowman’s Land you’ll have to unlock the door on the upper level of the lobby with the key obtained for beating Bowser a second time – which you do by first completing the first star of the previous stage, Dire, Dire Docks. Up the stairs there’s a whole bunch of new rooms and paintings – which means new courses.

Snowman’s Land is actually hidden. Go into the room with the large mirror and look on the left-hand side of the room from when you enter. You’ll notice a painting is reflected in the mirror where, on the real wall, there isn’t one. Jump to the blank wall and you’ll go into the invisible painting, kicking off this snowy stage. 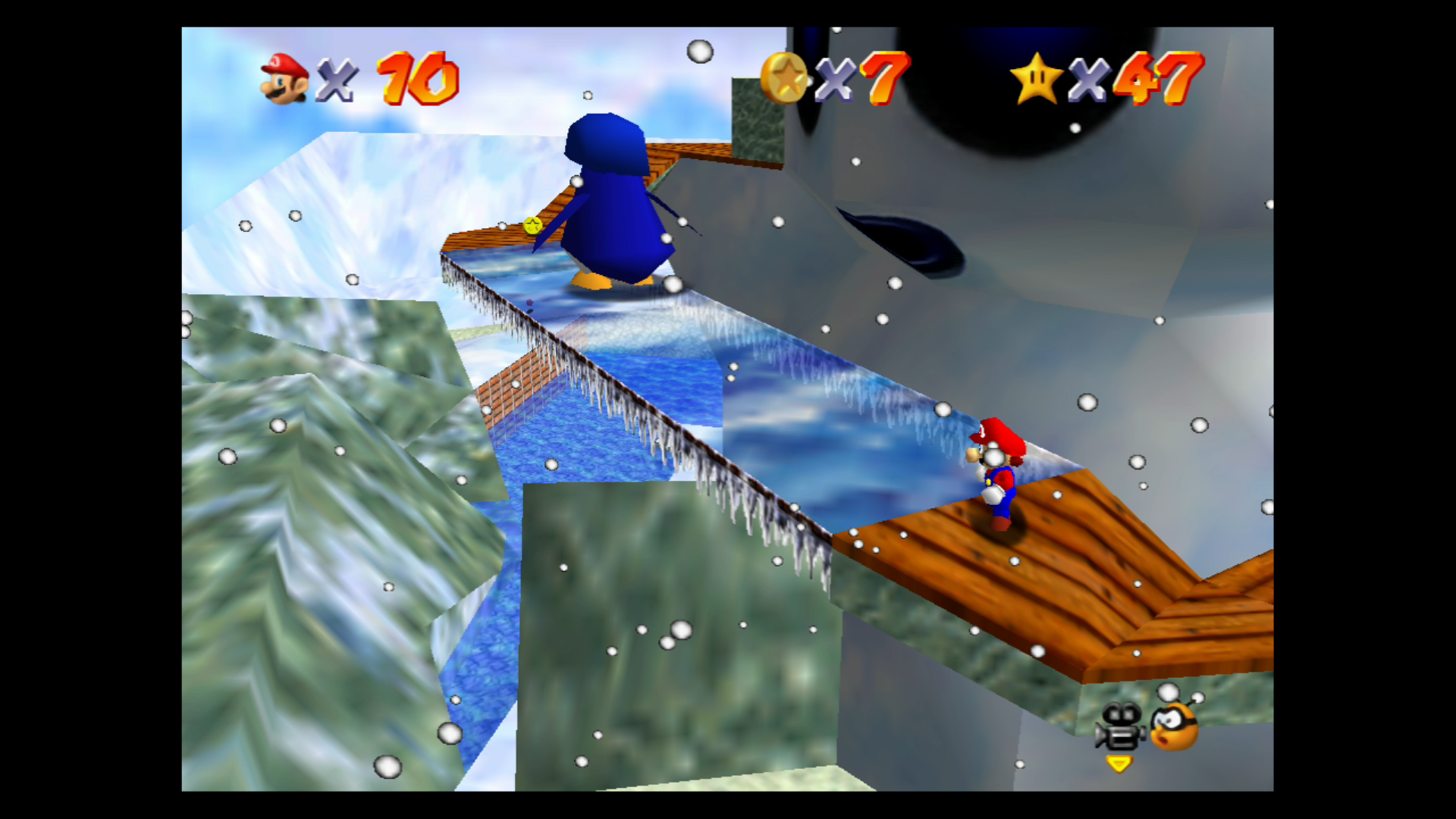 This star is simple but a little frustrating, to be honest. Clamber up the mountain, which involves some tough little obstacles. The center of the mountain is basically a giant snowman, thus the stage’s name. When you get to the Snowman’s head, there’s a big penguin on an icy path. If you step onto the ice platform, the snowman will blow you off. Phew! That’s a long way down. The penguin is nice and heavy, though, so if you hide behind him, you’re protected from the snowman’s breath. So follow the penguin’s lead – the star is at the top of the snowman-shaped summit.

Remember those Bully enemies back in Lethal Lava Land? Well, there’s one here in this stage, except he’s a ‘Chill Bully’ – he’s a texture swap, basically. Anyway, the Chill Bully is on an icy platform, and that’s what separates this from the previous Bully fights – the surface is slippery. The ice below will injure you and make you bounce, just like fire. Defeat the Bully by knocking him off the platform to get this power star.

To the left of where you start there’s a big ice block structure, and inside is a power star. Examine the structure and make use of its semitransparent nature to find a way in through the back. There’s a spot inside where you can jump (backflip) to the roof of the sculpture, then drop down to grab the star.

On the opposite side of the level to where you start there’s a pond with freezing water that you can actually swim in. Stay in it for too long and you’ll take damage from the cold, though. Anyway, over here there’s a bunch of those spinning enemies that when you jump on and defeat you get catapulted in the air in a helicopter move. You’ll see two of these in the water right before the path up to the snowman begins proper, and behind them, a ledge.

On that ledge, out of sight, are boxes – one of which contains the star. Jump on one of these enemies and use the boost it gives you to reach the ledge, then open the box to get the star.

Remember back in star 4, you got up onto that ledge and found 2 boxes? Well, the left box contains a star but the right box contains a Koopa Shell that you can ride. Riding the shell protects you from the damaging ice-cold water. From this ledge, you’ll find two red coins by following the wall to the right of where you get the shell. We’re not even going to list out all of the other coins here, as this stage is especially easy – they’re scattered around the ground floor of the stage. Two are found near the Bully’s platform, four to the north of the stage, and then two lone coins left over. They’re not hard to find this time.

Snowman’s Land Star 6: Into the Igloo

For the sixth star in Snowman’s Land you’ll need the Koopa Shell again from that ledge. Grab it, and then surf over to where there are the annoying waves of snow and ice that push you back. To the left of that there’s a slope too steep to run up, but there’s a line of coins telling you to move on up it – and that’s what you need the shell for. You’ll have to jump up the slope while on the shell. There’s an Igloo up here. Crawl inside. Within, there’s an ice puzzle and the vanish cap. You need to use the Vanish Cap to walk through the ice walls to get the star from the middle of the maze.

As is tradition, the tenth course sticks with a hidden star for grabbing 100 coins. There’s over 20 coins to spare on this stage if you grab them all, although 69 of the yellow coins are inside enemies, meaning you’ll need to defeat most enemies in the stage to get to 100. There are no blue coins either, for the record – the only stage without any!

As the snow melts, the next course on your list is Wet-Dry World!