The eighth course in Super Mario 64 tackles another classic from across the series – the desert level: Shifting Sand Land.

This sort of level first really made its Mario debut in Mario 3 – though if you’re counting side games you could make a case for the sublime Super Mario Land on Game Boy. Anyway, we all love a desert level, especially one that doesn’t have a homicidal sun, and this one is a classic. Mario can lose his cap to a bird, and when you lose your cap you take more damage ’til you get it back. What more do you want?

Access Shifting Sand Land from down in the basement. Facing the painting to Lethal Lava Land, head left and follow the path around to a dead end. The dead end is actually a false wall, and if you jump into it, it’ll take you right to the desert. 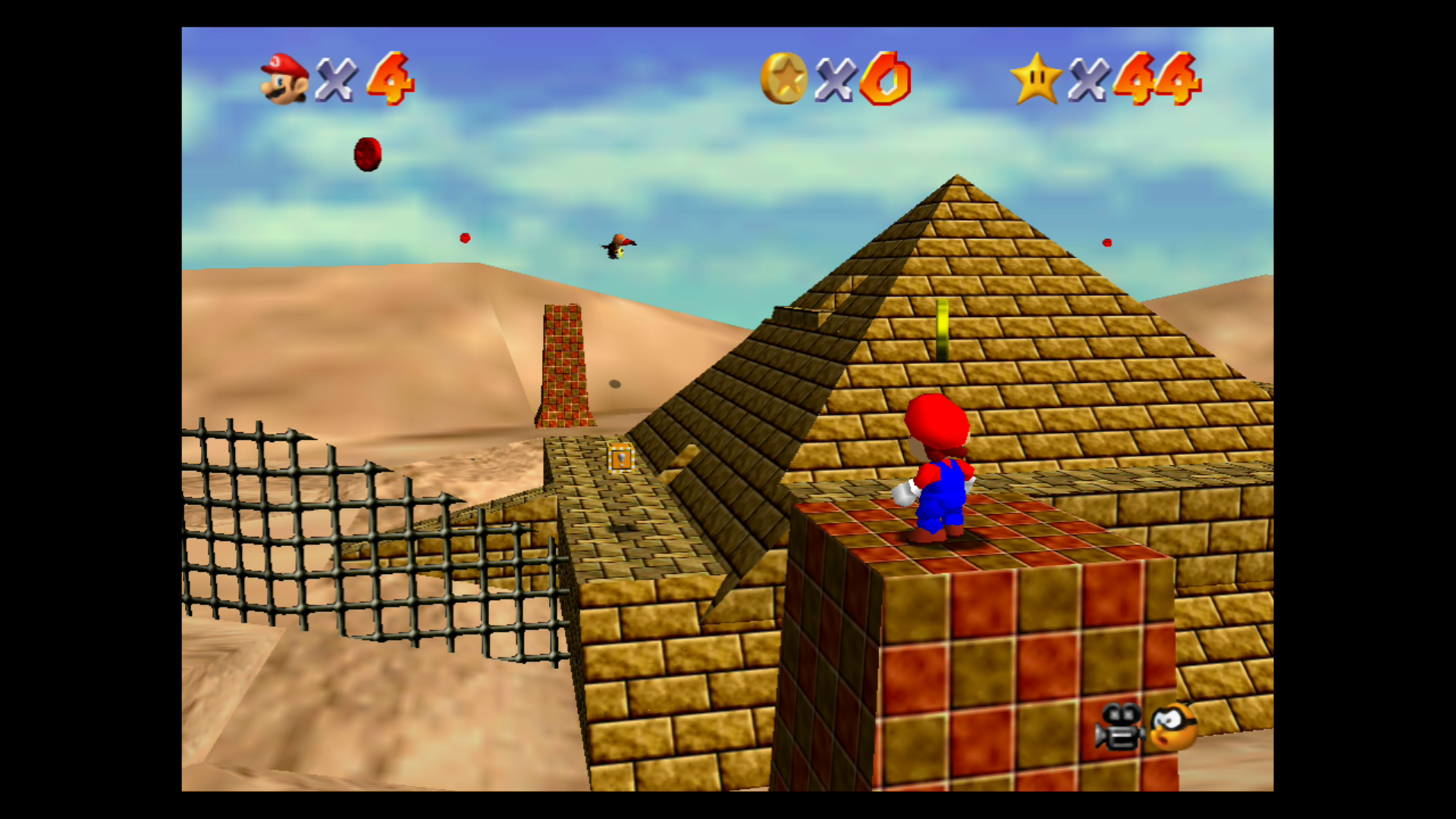 Shifting Sand Land Star 1: In the Talons of the Big Bird

This is pretty simple – flying around the stage is Klepto the Condor, and he’s carrying a star in his talons. I always thought Klepto was a vulture when I was a kid. Anyway, you can either use the Wing Cap to reach Klepto or you can follow the stage around, over the moving box puzzle to where you can clamber up on the pyramid. Near here are two pillars that you can just walk up despite how steep they are; Klepto flies circles around these, and you can grab the star just by timing a jump on top of one of these pillars.

This star is in a little inlet near the top of the pyramid. You can work your way around the stage to those pillars where Klepto flies – there’s a path up to the pyramid here. The Pyramid is technically too steep to climb, but if you’re deft you can make Mario do it without any power ups. Otherwise, grab the wing cap and use it to fly up there to grab the power star.

To start the hunt for this power star, head to the pyramid and go in the main entrance – that’s around the back of the stage, right near the pillars from star 1 and the general location of star 2. There’s a nice normal entrance to the pyramid; head inside. Once inside the pyramid, you need to work your way up. The quicksand here won’t kill you like outside, but it will make you slow and give you tiny jumps. The path through the pyramid is a pretty linear one up to the top – and at the apex of the pyramid, the star awaits.

Doing the previous stars, you will have noticed that there are 4 large pillars that you can walk up as if they’ve got weird gravity or something. Two of these you can just walk up to, while two are surrounded by instant-death quicksand. The best way to stand on top of all four is to use the wing cap to get around the level. Stand tall on all four, like the level name says, and you’ll blow the top off the pyramid.

Now fall through the new hole atop the pyramid – use the wing cap to get up there. You’ll be lowed down to a unique entrance in the pyramid. You now must beat a boss – avoid him knocking you off the stage, and punch the eye in the center of each hand.

This is another standard get all 8 red coins mission, though the twist is that four of the coins are in the air, as the level name gives away. You’ll need to nab the wing cap to grab these. Aside from that, there are four others, of course:

This power star requires you to head back into the Pyramid. Either entrance can do. There are special coins in there, but they sadly look the same as normal coins – though a counter will appear when you collect them. To get these coins, head up to where Star 3 was, but instead of climbing up that last bit to where the star is, drop down. There is a series of platforms you can drop down to here, one to the other, level by level, each time grabbing a coin. Once you have all five, the star spawns down at the base of the pyramid.

Shifting Sand Land has over 130 coins available in total, but that includes the red coins, 7 blue coins and a handful from enemies. You’ll need to collect coins both inside and outside the pyramid to get this star.

With seven more stars in the bag, your next level is another water stage: Dire, Dire Docks.