Down into the basement of the Super Mario 64 castle you’ll find the next four stages – including course six, Hazy Maze Cave.

This one isn’t entered through a painting – down in the basement, you’ll see a fire picture which goes to Lethal Lava Land – instead of entering that, hook a right to find a star door with no cost. Go through that and there’s a mysterious pool of liquid – jump on in to enter Hazy Maze Cave, which as another seven stars for you… 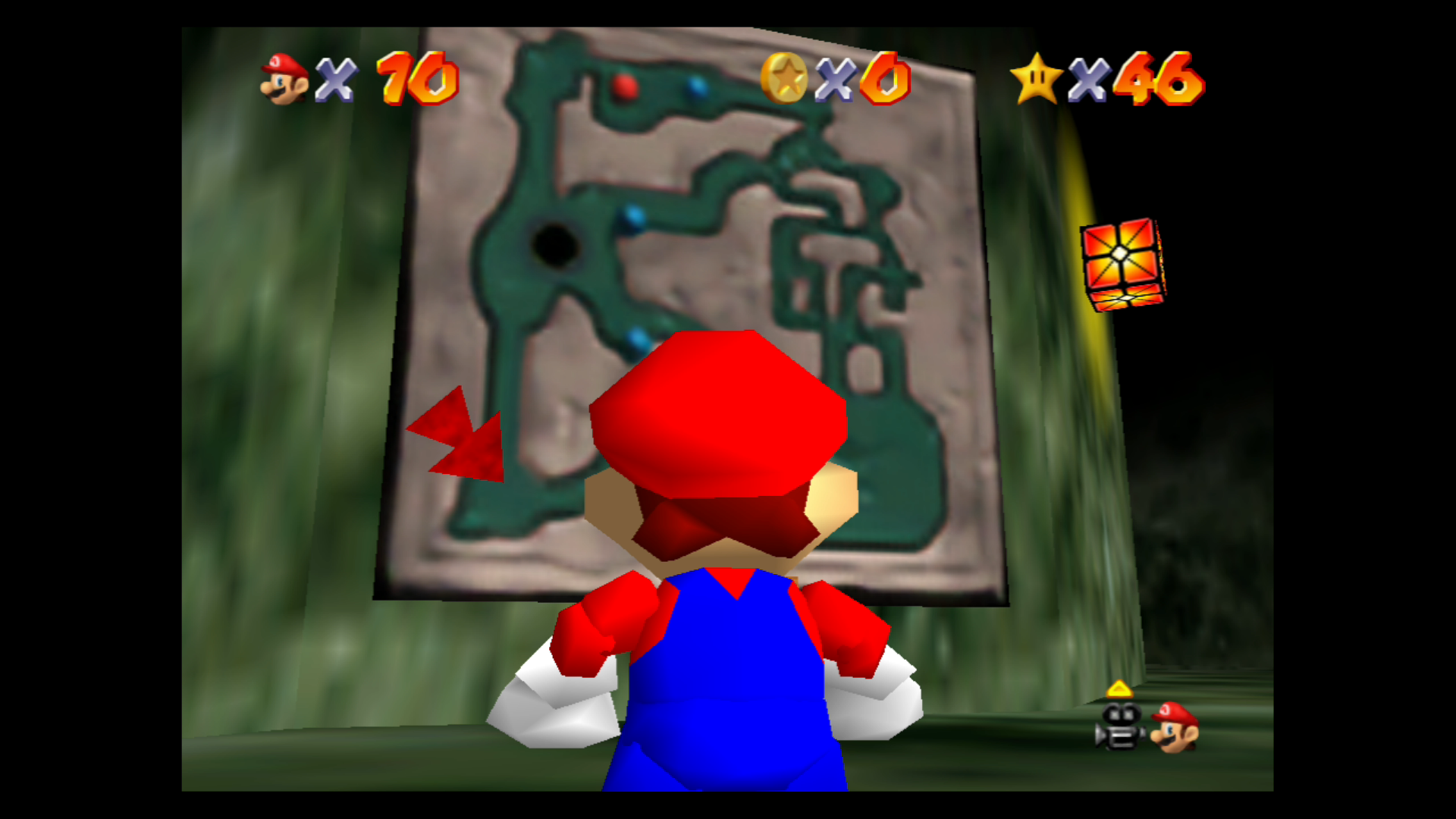 At the entrance, take the left-hand path and do a long jump to get over the large gap here. Follow the level course – up where the rocks are falling, through a door, down the elevator. You’ll eventually end up in a large open cave area, and here is Dorrie the Sea Dragon. Dorrie is friendly, so simply climb onto her head and use her to get onto the middle platform to reach the power star there.

The red coin star is earlier in this level, but it’s also more simple than other levels… and yet, more complicated. All of the red coins are all in one room, but getting them all is something of a puzzle. Head to the right corridor at the opening. The next room is a large boxy room with multiple floors. You can clamber to the first level using stairs in the corner.

At this level, there’s a platform with directional buttons. Step on a button to set the platform in motion in that direction – it won’t stop until it hits something. 4 coins are on this level, hidden inside blocks and the like. Then, you’ll want to guide the platform round so you can jump to a pole to climb to the next level, where you’ll find the final four coins. The star spawns back on the ground, right in the middle of the room.

For this star, you will need to have pressed the Green ! Switch to unlock the Metal Cap. Now head back to the lake where we got Star 1. There’s a Metal Cap block here. Use Metal Mario to hit a ! switch that is underwater in the lake, opening doors that you must then go through with a long jump after the metal cap has expired.

From the red coin room there’s a door, behind which there’s a hole. In front of the hole is a map – the down arrow shows your starting point and the up arrow shows the exit. Blue circles are places you can clamber up, but you won’t really need those this time. Anyway, give that map a look before heading down. Down this hole is a maze filled with toxic gas that hurts Mario. Metal Mario is invulnerable to this, so this star is easier if you grab the Metal Cap available down here. Exit the cave and the elevator leads you to the star.

This star is basically the same as the previous one – so head back down in the toxic maze. This time, you’ll want to use the spots where those blue circles are on the map in order to get up high to get to a ledge on the left. If you get lost, there’s a blue coin box down here – butt stomp that to make blue coins appear, which just happen to lead straight to this star.

Remember the area we passed through on the way to star 1 with the tumbling rocks? Avoid the boulders and get to the area where they are spawning into the stage and falling. There’s a ledge here, near the door – you’ll want to wall kick up there, just like in those stars on Cool, Cool Mountain and Big Boo’s Haunt – and get to the ledge. Then you can grab the star.

This isn’t a terrible 100-coin star, but you will probably need the blue coins found down in the toxic cave. There’s only 31 yellow coins, but there’s nearly as many again hidden inside enemies – a lot of the baddies here drop 3 coins upon defeat. Expect to lose a few of those coins down pits, mind – but there’s way more than 100 to be had on this stage.

Now it’s time to turn up the heat in Lethal Lava Land.