Home of the bombs sounds like a rough place for a nice, easy, starter tutorial level, but it’s more friendly than it seems. Like all levels in Mario 64, there are 7 stars to grab here – six mission stars and one for gathering a whole bunch of coins. Most of these can be nabbed right away, but for one you’ll need to pop back later once you have a certain power-up. Here’s how to get all the stars in World 1, Bob-omb Battlefield… 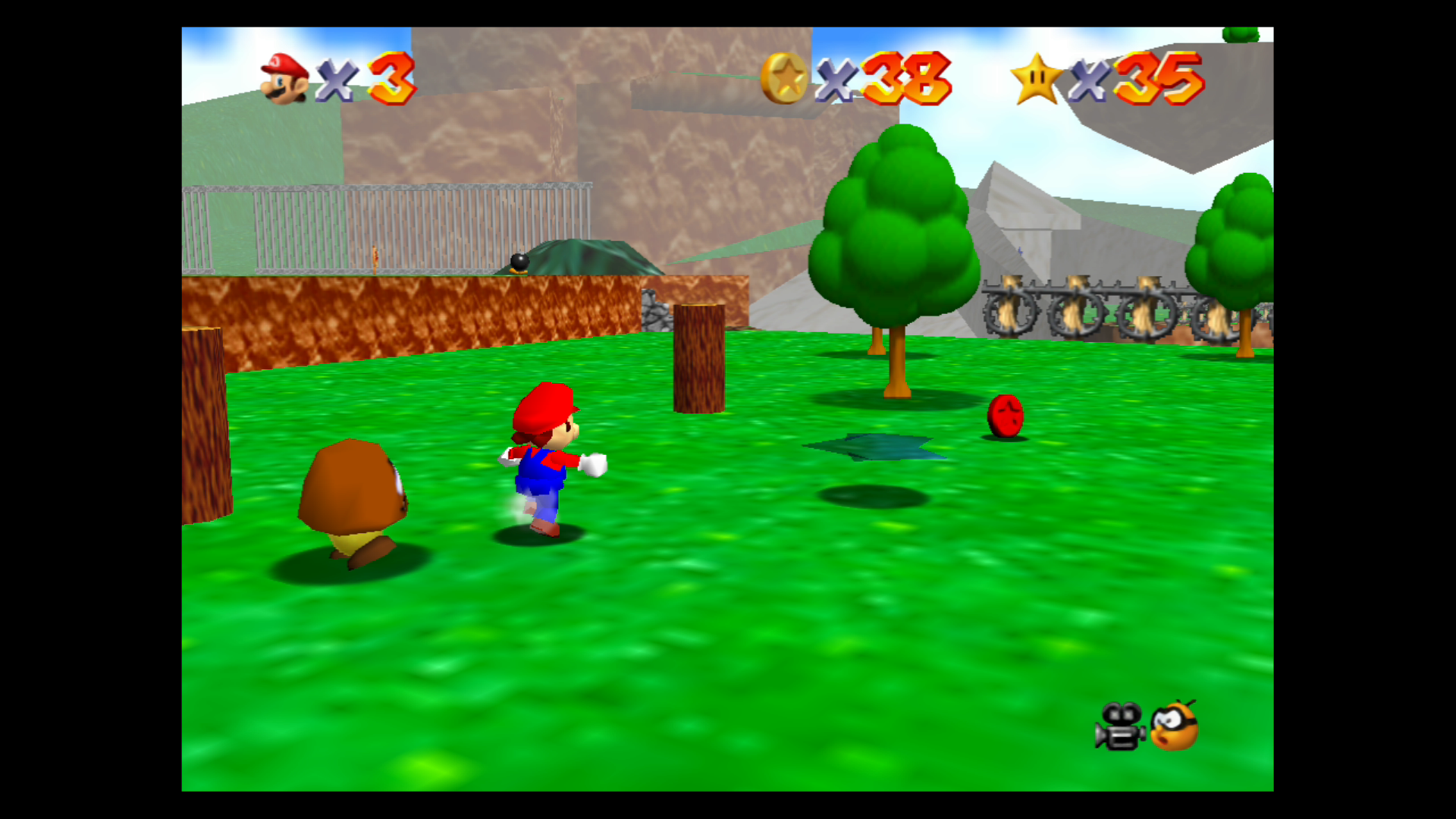 Your first star is nice and simple. Work your way through the level – the centrepiece is a large mountain with lots of obstacles on the way. Climb the mountain and meet King Bob-omb at the top. The fight is simple – he’ll walk toward you and try to grab you. Get behind him and use the punch button to grab him. Throw him, but be careful not to throw him off the mountain top. Throw him three times to win and get the star.

For Star 2, Koopa The Quick has spawned near the start. He’s the large Koopa turtle. Talk to him and he’ll race you for a star – you’re racing to the top of the summit, where King Bob-omb was. You’ll need to get there in around a minute in a half. You can easily get there in about a minute. You can use the warp hidden in the nook in the side of the mountain (just stand inside), but you can’t use the cannons – that counts as cheating.

Bob-omb Battlefield Star 3: Shoot to the Island in the Sky

Not all star descriptions in Super Mario 64 are as clear as this one. Talk to the friendly pink Bob-ombs to open the cannons, and then head up the bridge to the raised area to the right of the Chain Chomp. There’s a cannon here. Get inside and aim at the floating island in the sky. There’s a tree on the island; aim above it so Mario grabs the tree to stop you from overshooting the island. On the island there’s a yellow box; hit it for the star.

Alternatively, you can wait until you get the Wing Cap and get this by flying to the island.

Get used to this one; every level in Mario 64 has a mission to grab 8 red coins. Once they’ve been nabbed, the star will appear in a clear location in the level. The coins are as follows:

You’ll need the Wing Cap in order to get this star – which will unlock a little later. You’ll know it’s time when the sun shines in the castle lobby – just look into the sunlight!

Once you have the Wing Cap, get on the floating island as in Star 3. But now, grab the wing cap from the red box and then jump into the cannon. There are rings of coins; you want to pass through each ring, collecting the coin in the middle. Don’t steer Mario once you fire – the wind will do the work for you! The detection of passing through each ring is also quite forgiving.

We’ve seen a lot of Chain Chomp in this level, but now it’s time to interact with him. He’s chained down by a stump in the middle of his area. Butt Stomp this stump three times to free Chain Chomp – he then breaks the bars behind him allowing you to get the Power Star inside.

This star is hidden, but is also quite easy: there’s a lot of coins in this level. There are 102 yellow coins alone, plus yellow coins from enemies, 8 red coins and a blue coin. Collect 100 in total across any coins to make this star spawn. Remember a lot of the yellow coins are in the air as part of ‘Mario Wings to the Sky’, and remember that wherever you get the 100th coin – even if it’s mid-air – is where that star spawns.

Now you’re done with the bombastic basics, you can move onto the next level: Whomp’s Fortress.