If you’re a seasoned Borderlands 3 player you’ll be no stranger to boss battles, but the first one in the new Psycho Krieg DLC really is one big Fustercluck.

As you progress on the quest with Sane and Psycho Krieg to siege Castle Crimson, you’ll soon stumble across your first boss battle against Evil Brick and Mordecai. There are a few unlockables and vending machines just outside of the location you can use to refill your ammo and look at new shielding equipment before you jump in.

Depending on your difficulty level and setup, this boss battle is either going to be a breeze or a complete ballache, and I found it was the latter. So, get your biggest and baddest weapons ready for a fight. 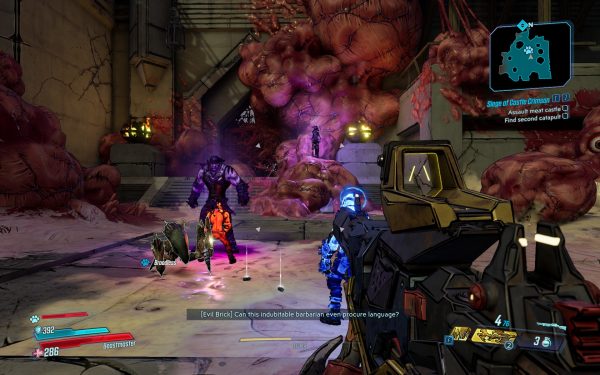 Borderlands 3: Psycho Krieg and the Fantastic Fustercluck – How to defeat evil Brick and Mordecai

The main thing to watch out for in this battle is their invincibility phases. They will each glow red and become immune to attacks, usually taking turns, so don’t waste your ammo during these phases. The best plan is to keep moving – I ran in a circle and occasionally up the middle for the entire fight, as you’re either being followed by brick or having Mordecai constantly fire on you.

Having a weapon that fires sticky bullets or grenades would be a good shout as you can fire them on Mordecai, then change to a heavier weapon to take on Brick. Remember to keep an eye on your ammo levels and swap out weapons when you can.

I’d recommend bringing a good shield into the fight, too, as you’ll be hit with sniper bullets, birds and fists during this fight. A grenade with a decent AOE also bodes well, and have a good range of grenade/ rocket launchers, shotguns and quick-fire weapons like SMGs in your arsenal.

Playing as Beastmaster, I also set my companion on Brick whenever I could, so keep your special abilities in mind. It’s up to you whether you take Mordecai or Brick out first; personally, I got rid of Mordecai first because his bloody birds were annoying me, but getting rid of Brick chasing you is also a good idea.

And that’s it! Just keep at it till they’re both good and dead then move on to the next section. You can check out our Signal to Noise Castle Crimson, Sapphire’s Run and Benediction to Pain Signal to Noise guides here.