Turrican is coming back for its 30th anniversary.

During gamescom Opening Night Live, Strictly Limited Games and Factor 5 will make an announcement and show off a trailer for Turrican, which was originally released in 1990.

Whether it is a remaster, re-release, or a new game in the run and gun series is not known, as further information will be revealed at that time. 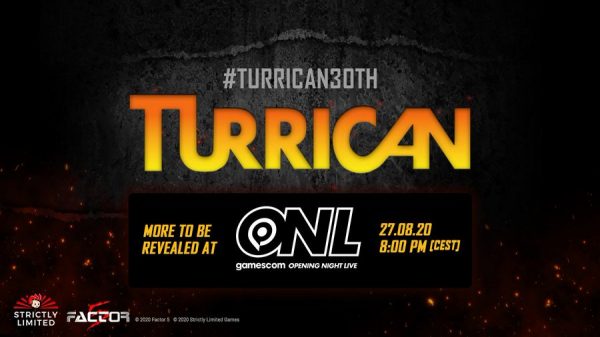 Here’s more from the press release:

Welcome Back to the Legend!

After three decades in dormancy, we welcome the return of a true legend. Developed by one of Europe’s greatest independent studios of all time, Factor 5’s Turrican series became one of the most acclaimed and well-regarded video games of all time shortly after its release in 1990.

Now, teaming up with the original development team, Strictly Limited Games is excited to bring back this legendary IP.

On Thursday, August 27  an exclusive trailer and more about the special 30th birthday edition will be revealed during gamescom Opening Night Live from 11:00am – 12:30pm PT.

After the reveal, preorders of the exclusive and limited editions will be made available on the Strictly Limited Games store.

The series started in 1989 on the Commodore 64 with a demo level of the full game which was released in 1990.

It was also released for the Amiga, Atari ST, and other platforms, and the following year, console ports for Sega Mega Drive TurboGrafx-16 and Game Boy were released.