PGA Tour 2K21 positions itself as the start of a new yearly golf franchise, but the truth is it comes from a years-strong pedigree of golf gaming. That developer experience can be felt in the game – which feels way more competent than a first-time effort.

The best thing about PGA Tour 2K21 is that when you putt the ball and it teeters on the edge of the cup but stops short of falling in, you don’t want to put your fist through the screen. When you nail that first drive on a par-3 hole and the ball actually hits the flag only to bounce away to make for a really difficult second shot, you don’t want to create a controller-shaped indent in the wall. That’s a difficult thing to nail.

As a skill-based sport, golf can make a really frustrating video game. Thankfully, despite being pitched as a triumphant return for mainstream golf games and a new 2K golf franchise, this game has history which keeps it from that pitfall. This isn’t really an all-new golf franchise, you see – developer HB Studios has made three ‘The Golf Club’ titles in recent years. PGA Tour 2K21 uses those games as a foundation, thus avoiding all those difficult first game teething problems, which is great.

The Golf Club was already one of the best golf simulation experiences to date, and PGA Tour 2K21 takes many of those systems and runs with them. There’s a huge amount of depth here, but it’s also eminently accessible, with assists and simplifications you can toggle in order to make something you feel comfortable playing.

The main draw this time around is of course the full integration of the PGA Tour. It’s the backbone of the game, in a sense, bringing with it real-world clothing, club and sponsorship customization for your personalized avatar, real superstar players to face off with in rivalries and the courses that make up the PGA Tour competition itself.

It’s good stuff, and when you’re on the tour, the game does a fantastic job of making it feel like you’re watching a broadcast. It might cut ahead to a future hole, for instance, so you can see what one of your rivals is up to further down the course. You can skip these moments, but they’re atmosphere-building and informative, as the plays other pros make might inform how you approach that same hole later on.

The ebb and flow of golf leads to a relaxing experience, which is perhaps part of why golf games have always been a staple of the industry. Here you’re constantly checking things before teeing off – the distance, the club, the direction and speed of the wind. Then you’re adjusting things like your shot fade, approach angle and ball spin to try to help you. There’s no after-touch mechanic here, which I like. It’s all down to how you line your shot up – proper simulation. 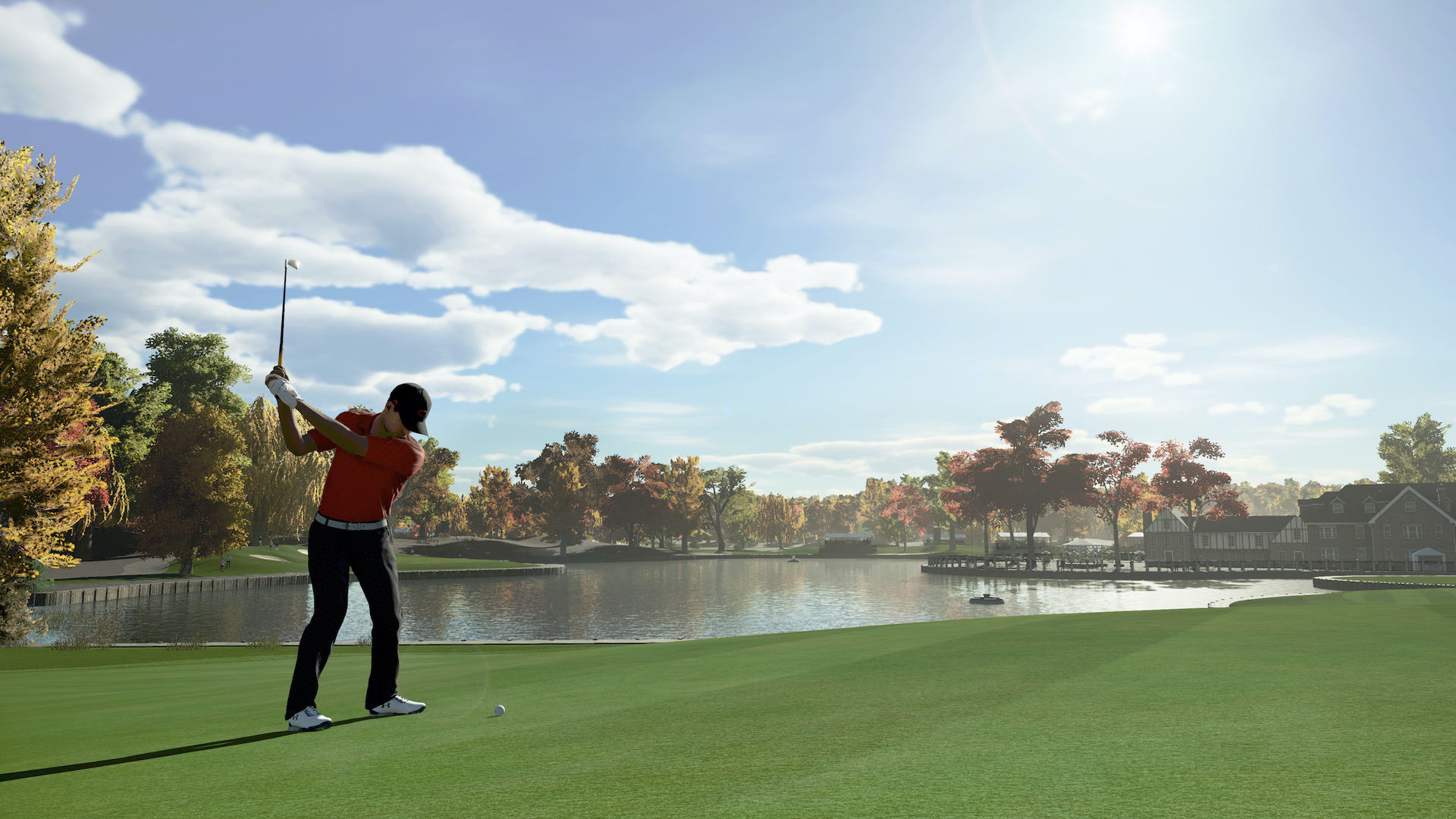 That isn’t to say things are too difficult or, indeed, too easy. There’s a putt preview, for instance, but you’re limited in how much you can do it, forcing you to properly read the green. The systems and user interface are built in such a way that when you narrowly miss a putt you don’t feel cheated – your errors are your own.

PGA Tour 2K21 is intermittently a very pretty game with some lovely-looking golf course environments – but every now and then it cuts to a building with an inexplicably rough-looking texture, or a rubbish-looking tree. Human characters have that sort of dead-eyed, thousand-yard stare that’ll burn into your soul. When the lighting hits right and people aren’t the focus it looks good, though. It did leave me contemplating a next-generation golf game with ray-traced light beams bouncing off the water hazards, mind you. Maybe next year.

The commentary from Luke Elvy and Rich Beem is classic early sports game stuff – before a huge database has been built up, funny, cute and generally accurate but also repetitive within a couple of rounds of 18.

Beyond the PGA Tour and career mode, there’s also a powerful course creator for exciting custom creations – a most welcome hold-over from previous The Golf Club titles – and support for a variety of multiplayer modes. It’s all good, sharp stuff, and the performance in the PC version I played was smooth and fast at a full 4K, though I’d expect that for a game like this on a powerful machine.

Whatever angle you’re coming from, it’s fair to say that PGA Tour 2K21 will likely satisfy your golf game needs. If you’re new to this sort of game, you’ll be gently introduced by well-crafted tutorial mechanics and charmed by the quiet chill of it all. If you’re a lapsed EA Tiger Woods player, you’ll likely be impressed by the systems and mechanics HB Studios has built up over the last four games to differentiate their take. And if you’re a Golf Club veteran, this is another solid entry, iteratively improving on those that came before. It ticks all the boxes, and it’s great to see fully-licensed PGA Tour golf back at the forefront of sports video games once more.

Version Tested: PC. A review copy was provided by the publisher.