Rocksteady has posted a tweet featuring an unsolicited letter it received from female employees at the company regarding the Guardian’s recent report on accusations of abuse and harassment at the studio.

The tweet features an unsolicited letter from seven of the female Rocksteady staffers that signed the initial 2018 letter calling out inappropriate conduct in the workplace.

According to the new letter, eight of the ten employees who initially brought harassment issues to light are still with the company. It goes on to state Rocksteady addressed the issues immediately, and not two years later as the Guardian report claimed.

Here is the letter in full: 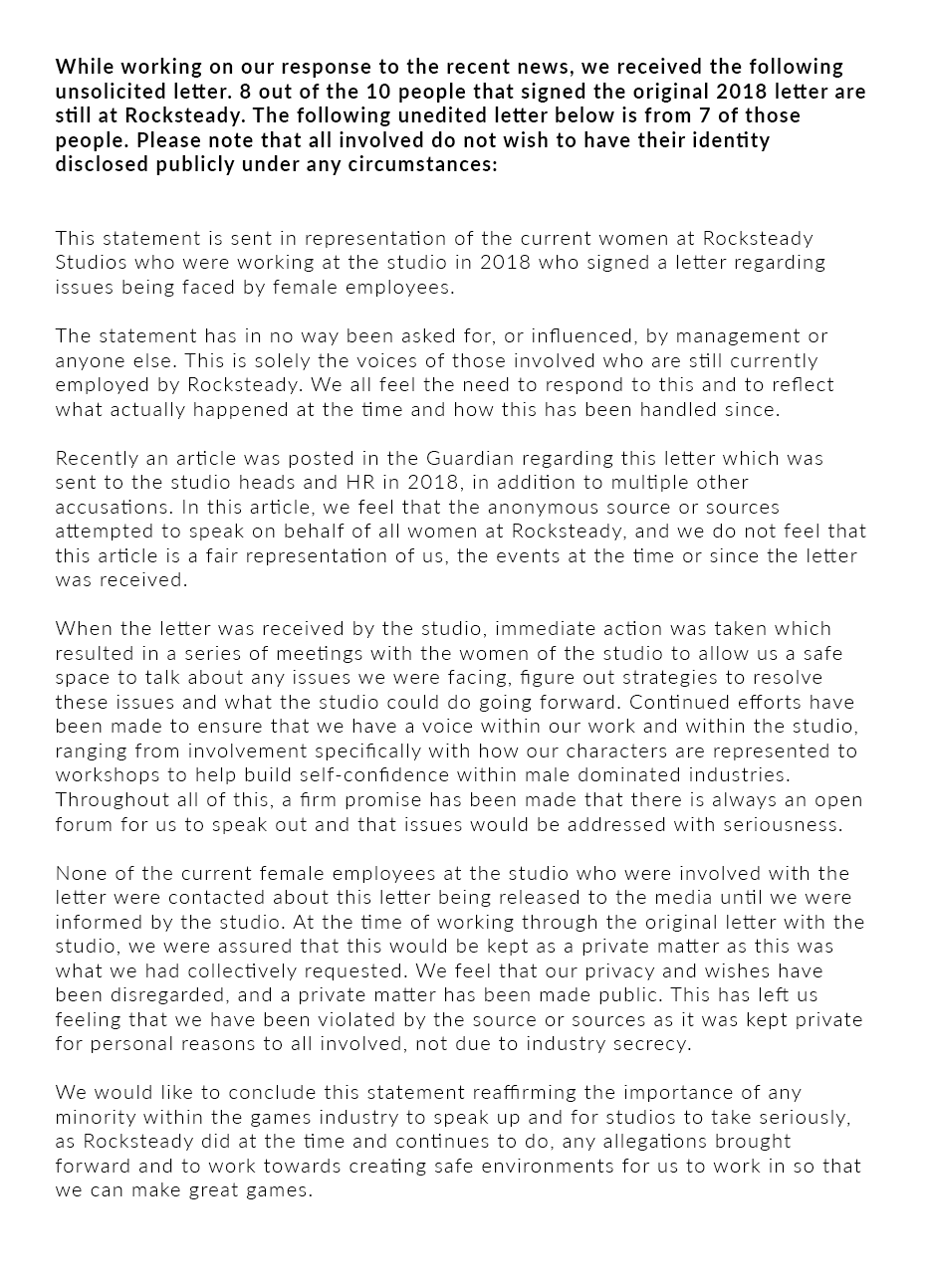 Batman developer Rocksteady Studios has been accused by multiple employees of ignoring harassment in the workplace.

According to a report from The Guardian, female employees at Rocksteady signed a letter two years ago and sent it to the bosses, accusing the studio of failing to prevent inappropriate behaviour and sexual harassment.

The letter was issued in 2018, and 10 out of 16 female staffers signed it. The letter noted various “slurs regarding the transgendered community,” chatting about women in a “derogatory or sexual manner”, and sexual harassment. The latter occurred in the form of advances, “leering,” and “inappropriate comments.”

One of the women, who spoke with The Guardian, came forward due to Rocksteady’s lack of response. She stated it was felt by her that employees were still suffering from sexism, harassment, and inappropriate conduct.

“I have heard everything from groping claims to incidents involving directors, all of whom are men,” she said. “Yet the only thing we had, as a result, was a company-wide seminar that lasted an hour. Everyone who attended was asked to sign a statement confirming that they’d received the training. It felt that it was a just way for them to cover their arses.

“Rocksteady doesn’t have the best reputation for representing women,” she said, using the portrayal of Harley Quinn and Poison Ivy from its Batman games. “Sometimes you could see the surprise on their face when you said that’s not how women dress.”

When contacted by The Guardian, Rocksteady issued the following statement:

“From day one at Rocksteady Studios, we set out to create a place where people are looked after, a place fundamentally built on respect and inclusion.

“In 2018 we received a letter from some of our female employees expressing concerns they had at that time, and we immediately took firm measures to address the matters that were raised. Over the subsequent two years, we have carefully listened to and learned from our employees, working to ensure every person on the team feels supported. In 2020 we are more passionate than ever to continue to develop our inclusive culture, and we are determined to stand up for all of our staff.”

Bosses at the studio have since held a meeting where the letter, again sent in 2018, was discussed for the first time.

Rocksteady is set to reveal its latest game, Suicide Squad: Kill the Justice League, this weekend during DC FanDome. During the event, WB Games Montreal will also reveal its new title, which is said to be a new Batam game.