One of China’s most popular streamers recently announced that she has chosen to quit her Cyberpunk 2077 voice acting role due to receiving massive backlash from fans online.


渗透之C菌 is one of the most well-known YouTubers in all of China. According to a user on Reddit, she was one of several Chinese streamers who was due to make a cameo in Cyberpunk 2077, either as stars of in-game commercials or as minor voice actors.

The announcement was widely discussed across Chinese social media, with fans wondering whether it was necessary for a game to have so many celebrity appearances. Some people went further, specifically criticizing individual streamers and questioning their acting capabilities.

渗透之C菌 was one of the people targeted. Although she is one of the most successful streamers in China, she has received criticism in the past for her sexuality and “sell-out” to The Last of Us Part 2, which, according to the Reddit post, was “overwhelmingly criticized” by players on Chinese social media.

Two days after CD Projekt Red announced that streamers would be making cameos in Cyberpunk 2077, 渗透之C菌 announced her resignation from the project on social media. 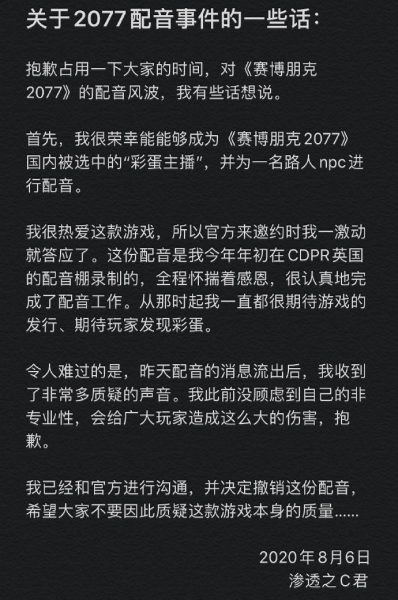 “I am very honored to be chosen as an Easter egg streamer in the game and do voice acting for some NPC,” she wrote, as translated in the Reddit post. “I love the game thus I accepted their offer and finished my recording at the beginning of 2020 in CDPR UK studio.”

“Sadly, I received large amount of disputes from online community after the announcement, thus I have quit the role and requested CDPR to remove my voice line from the game. I hope this incident will not undermine players’ anticipation to the game.”

The announcement has also been deleted from CD Projekt Red’s social media, where it has apparently been replaced with a video about Chinese voice acting and localization in Cyberpunk 2077. Apparently an estimated 10,000 hours has gone into these departments.

It’s sad to see, but that sadness is unsurprising when you consider how fans responded to The Last of Us Part 2 leaks when they originally surfaced online. What could have been a fun opportunity for a popular streamer has instead become a target on her back. Hopefully the backlash ends soon and she gets to go ahead with other opportunities in future.