It was recently announced that Serious Sam 4 will launch in September instead of August.


Have you ever felt like charging headless with a bomb in each hand towards a massive, concrete word? Was that word August? And, upon reaching said word, was it cruelly plucked into the air by some sort of divine intervention, causing you to run straight past it, unable to stop, towards a new structure reading September 24?

If not, you are not Serious Sam 4.

Anyway, fans disappointed by the slight delay will at least be glad to know that September 24 is the new “100%-not-gonna-change” release date. While you’re waiting, check out the new trailer below, which is about as Serious Sam as a trailer can get.

Details about the delay were also recently shared in an official press release.

“Croteam and Devolver Digital recently announced that the high-powered prequel Serious Sam 4 will unleash both barrels of chaos on Steam and Google Stadia in August 2020, but we meant to say September 24th,” it reads. I hate when that happens.

“Humanity is under siege as the full force of Mental’s hordes spreads across the world, ravaging what remains of a broken and beaten civilization,” the press release continues, describing the premise of Serious Sam 4. “The last remaining resistance to the invasion is the Earth Defense Force led by Sam ‘Serious’ Stone and his heavily-armed squad of misfit commandos.” 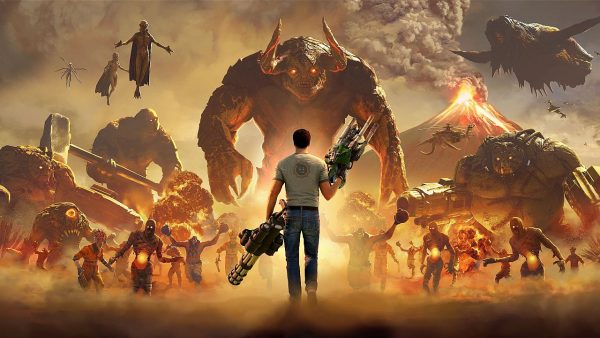 “That will make sense in a Serious Sam kind of way,”  Croteam’s Daniel Lucic told VG247 at E3 two years ago. “Because the game doesn’t really make sense at all.”

Before you go, remember the time lots of idiot gamers got upset because the harpy in Serious Sam 4 doesn’t have her boobs out?