I never noticed until somebody else pointed it out, but the Arbiter’s storyline in Halo 2 is exactly like the plot of the Lilo and Stitch movie that came out two years before it.


Halo 2 launched for the original Xbox in 2004. It tells the story of the Arbiter, an Elite who is being punished for failing to prevent the destruction of a Halo ring. As the Arbiter – which is the name of a rank, not a type of alien lizard – you realize that everything the Covenant told you is a big, fat lie, and decide to team up with John Halo in order to beat up big brute Tartarus. 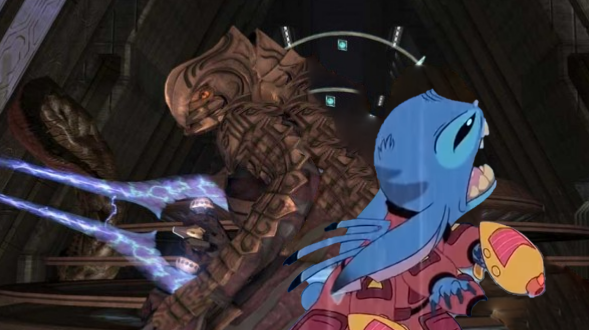 But the Lilo and Stitch movie came out two years prior to that. And in said Lilo and Stitch movie, Dr. Jumba Jookiba is arrested for illegal genetics experiments and a perceived intent to cause pandemonium. He’s forced to team up with Agent Pleakley in order to capture the newly escaped 626, who looks like Stitch but is a bit more likely to shoot your face off.

Jumba gets fired and realizes that everything the Galactic Federation told him was a big, fat lie, and teams up with Nani and Stitch in order to beat up big brute Captain Gantu – who looks a bit like the child of an orca and Brock Lesnar.

You can see where I’m going with this, and it’s all thanks to a Reddit post published by a user called newhampshiresmashed.

“My girlfriend mentioned this to me the other day while watching Lilo and Stitch and I felt the need to spread the message,” they wrote.

“Both Halo 2 and Lilo and Stitch open the same way. We’re introduced to an alien who is currently at trial for his crimes. For the Arbiter this is the loss of the Ring and for Jumba this is his illegal experiments. Even the shots in this scene are eerily similar.”

They go on to compare the missions of Jumba and the Arbiter, who are only freed in order to hunt someone down for the institutions to which they are bound. But they are betrayed! So they become good guys and say, “actually, I’m going to fight the government.”

“Here even Stitch and Lilo’s stories start to greatly resemble those of Johnson and Keyes at this point,” the post continues. “Both being captured, but only one being actually taken by Tartarus/Gantu. Then the other figure who managed to escape (Stitch/Johnson) works with their (previous) enemy (Arbiter/Jumba) to save the person captured.” It all adds up! All of it!

Here’s the kicker, though.

“After mentioning this to some friends, that’s when I realized that both Tartarus and Captain Gantu are voiced by Kevin Michael Richardson (who are essentially the same character in our stories) and now I refuse to believe this is a coincidence.”

Halo 2 and Lilo and Stitch (2002) are the same thing! Lilo is Keyes! Stitch is Johnson! Jumba is the Arbiter! Gantu is Tartarus! Voice actor Kevin Michael Richardson is both of those people!

This is incredible, and yet it is unequivocally real. You will never view Halo 2 or Lilo and Stitch as separate entities again.

I’m not quite sure how to follow this up, but I think the best place to direct you is towards Hideo Kojima getting stung by “at least ten bees all at once.”