Halo Infinite has had a rough ride in the hours after its campaign reveal – but beyond the internet mockery, a more confident post-Bungie Halo is emerging.

Halo Infinite is currently generating a seemingly infinite number of memes; fans melting down over the inclusion of sprint, flat-looking screenshots… and of course that Brute, a single character from a single screenshot who has basically become the new version of Wall Guy, a character from a naff-looking Perfect Dark Zero screenshot so internet famous in 2005 that developer Rare slipped a reference to him in the game.

But when you step back from all of this for a second and take in the released footage on its own, something else becomes clear: Halo Infinite surely looks like 343’s best run at the series yet.

343 was of course built around Halo and built to further Halo after Microsoft and series creator Bungie parted ways. Despite that, it’s always felt like 343 has always struggled to make Halo work for the developer. This has partially been down to a clear desire to try new things and redefine the series – something which hasn’t worked out. In other cases, Halo’s attempts to keep up with and assimilate ideas from other popular shooters only served to dilute the razor-sharp formula that made the series great. So far, Halo Infinite doesn’t look to have those problems – even if it does have Doom’s meat hook now.

I saw the demo that you all would’ve seen as part of the Xbox Games Showcase, but I also later attended a private session with some of the crew from 343. We saw the same demo, but with the opportunity to quiz the team and hear their commentary on what they’ve implemented.

What became clear through that chat is exactly what direction Infinite is taking, and why that works. It’s a “spiritual reboot” – still a sequel, but to a degree heading back to basics for the series. The mission from the showcase takes place some way into the campaign, which the developers say is bigger than 343’s last two efforts combined. It’s been crafted to evoke the best of the series.

So that moment that Master Chief steps out of the crashed ship onto the ring and has a moment for tranquil before bumping into low level Covenant grunts – that’s obviously a homage to that iconic moment from the first game. The controls appear to have largely reverted back to their Halo 3-era defaults after several games’ worth of experimentation. The movement feels more like the third game, too, as does the design of the open-ended arenas where you’ll be doing battle. 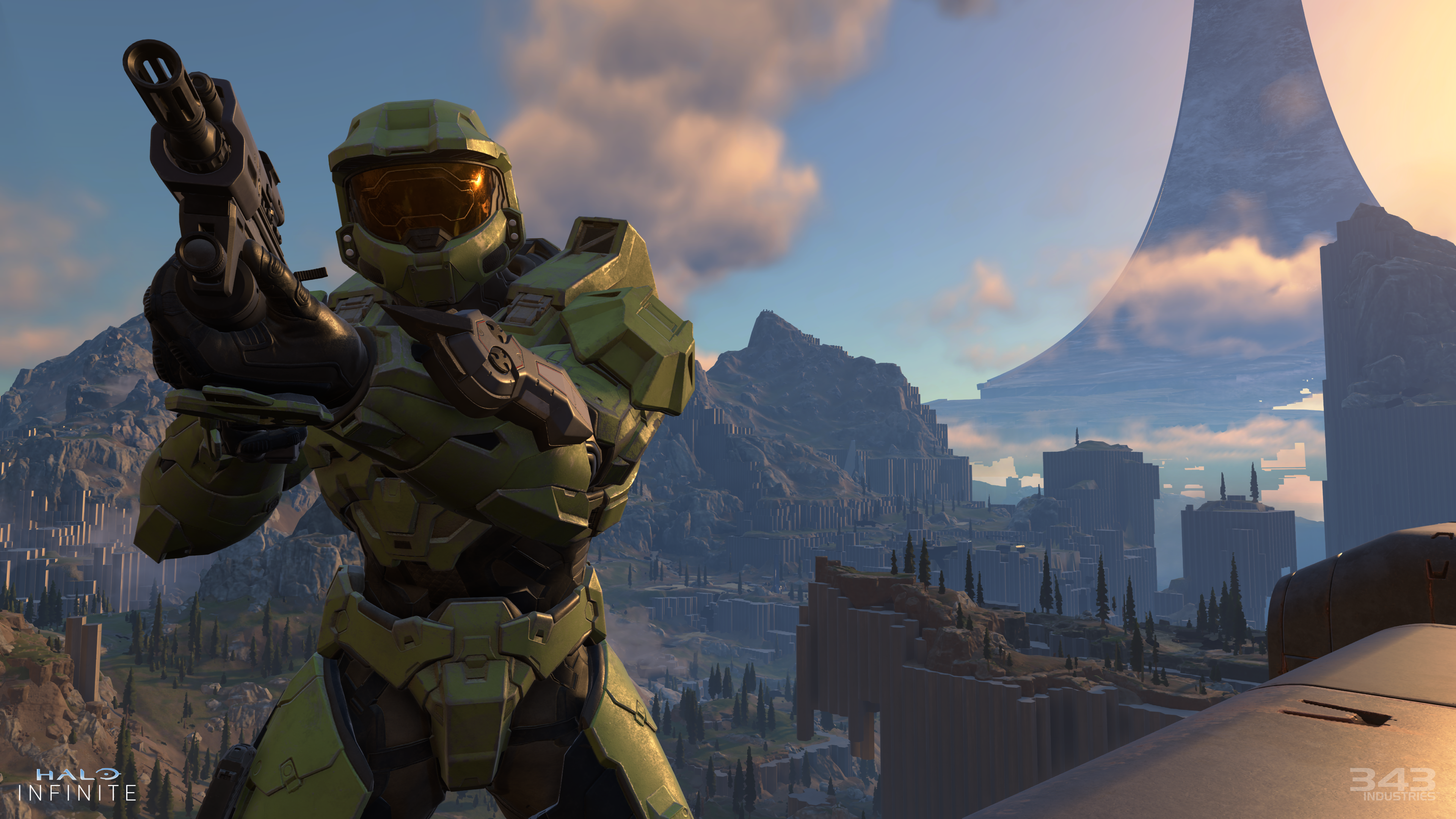 What’s different, of course, is the scale of those arenas. A single combat encounter zone in Halo Infinite might very well resemble a part of a Halo 3 level that you’d approach in a Warthog before getting off to take on enemies in whatever way you see fit. But what’s different here is that this area is just one part of a larger, more open world – and what remains to be seen is just how open it is.

Sure, if you see a mountain in the distance, you can probably go grapple your way up it and fight alien hordes atop it. But can you use the new grappling hook to bypass certain combat encounters entirely? If this game features an entire open-ended Halo ring to explore, will it be possible to sequence break the story by heading to hidden late-game objectives early?

These sort of mission structure questions aren’t being answered by the team just yet, but what we do get a good look at its combat. It’s snappy and smooth, and appears to have a weight to it and balance that looks at once more like Bungie’s first three Halo titles while retaining features like a dedicated sprint. The new grappling hook looks fun and interesting – like you’ll be able to string together hyper-satisfying traversal kills with it, but also like it won’t come to completely dominate multiplayer.

Obviously any demo like this has limited use without actually playing the game. But having watched the demo through a couple of times and spoken to developers about their soft-reboot direction, a gut check has a surprisingly decisive result: I think this looks like the best-playing Halo in years. 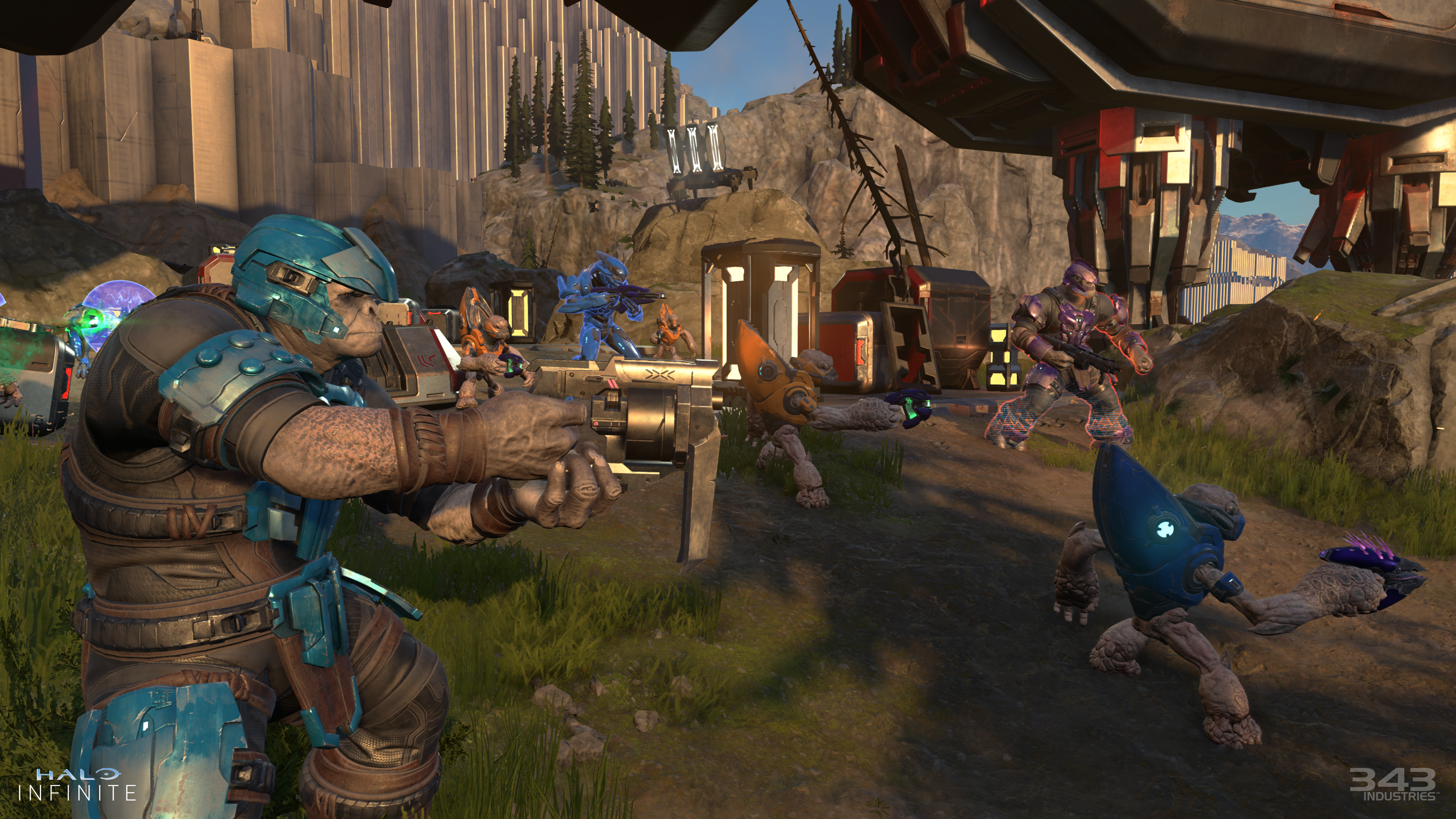 That makes it all the more of a shame that the debate has gotten so snarled up on what the game looks like. There are actually improvements hidden here; in motion, there’s a visual clarity to the use of color, particularly on enemies, that mean the various ranks and species of alien stand out in a way they didn’t in 343’s previous efforts. But also, Halo Infinite is not exactly what you’d call a next-gen showstopper. If it were a current-gen game, we’d all probably be talking about how this looks like the best Halo in ages. But we’re not; we’re talking about that funny-looking Brute.

This is perhaps the fatal flaw in the Xbox next-generation strategy in general. With true next-gen exclusives for the Series X seemingly at least a couple of years off, Halo is what you get: a current-generation game boosted up in frame rate and resolution but not seemingly in detail. It’s hardly a next-generation showcase – and that’s a problem when Infinite is leading the charge in trying to sell players on an expensive new piece of hardware.

But in terms of how it plays? As far as I can see thus far, there is no need to be upset. Knowing the combat looks good, I’m more pumped than ever to see how Infinite’s open-world structure plays out in the final game – it’s just a shame you can’t find much chatter about that online for all the next-gen graphics memes.