A recent interview with devs from 343 Industries appears to indicate that there could be more than one world to visit in Halo Infinite.


The news comes from a recent YouTube video posted by Alanah Pearce. You can check out the full video below, which includes details on yesterday’s Halo Infinite gameplay featuring footage from an early build, the fact that the Halo Infinite pilot is basically the new Cortana, and more.

Prior to yesterday’s Xbox event, Pearce played a preview build of Halo Infinite and had a chat with some of the devs. When Pearce asked about whether or not players would visit other worlds in Halo Infinite, devs from 343 Industries said they’d like to keep some secrets.

“Which makes me assume that yes, there will be more than one world that we visit,” says Pearce.

Pearce also said that she got “Anthem vibes” off of Halo Infinite, and asked the devs about whether or not there would be some sort of hub location like Fort Tarsis. They didn’t really feel up for answering, so let’s just put that down as a maybe.

The world itself is described as a “broad expansive world” and a “full sandbox with a bunch of stuff for players to discover.” Pearce says that from what she played, it’s a bit like Ghost of Tsushima – a left-field comparison at face value, but a useful one when you break it down.

Similarly to how Tsushima has gold and silver objective markers, denoting main and side quests, respectively, Halo Infinite has a main story and some esoteric side content you can exhaust at your own discretion. Also, it’s “several times larger than the last two campaigns put together.” 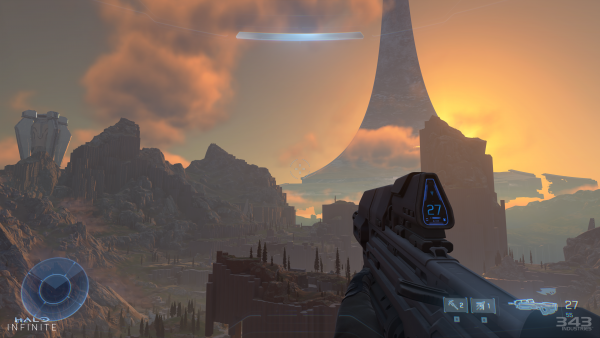 Apparently, Infinite has a big, open world that opens up as you progress – similarly to how Tsushima’s world gradually begins to expand as you venture further north, towards the place where there’s snow everywhere and the previously cool wind mechanic becomes massively infuriating because how can you see a gentle breeze against snow of the same colour? Let’s not get into that.

Naturally, the incorporation of both main and side quests means that you don’t necessarily have to do story missions. You can do one, chill out on a Mongoose for a bit, and then do another one later on. Or you can do what I’m going to do and absolutely sprint through the campaign before immediately restarting it to take the world in properly the second time around.