Charms are an important part of your experience on the island of Tsushima, bolstering Jin’s abilities, and rounding out the weaknesses of your build. With the game out in the wild for a week, we’ve had a bit more chance to get to grips with the different buffs each charm provides.

While there are plenty of charms to collect in Ghost of Tsushima, many are better than others, and some have more powerful versions which unlock later in the game.

Here are our picks for the best charms in Ghost of Tsushima. 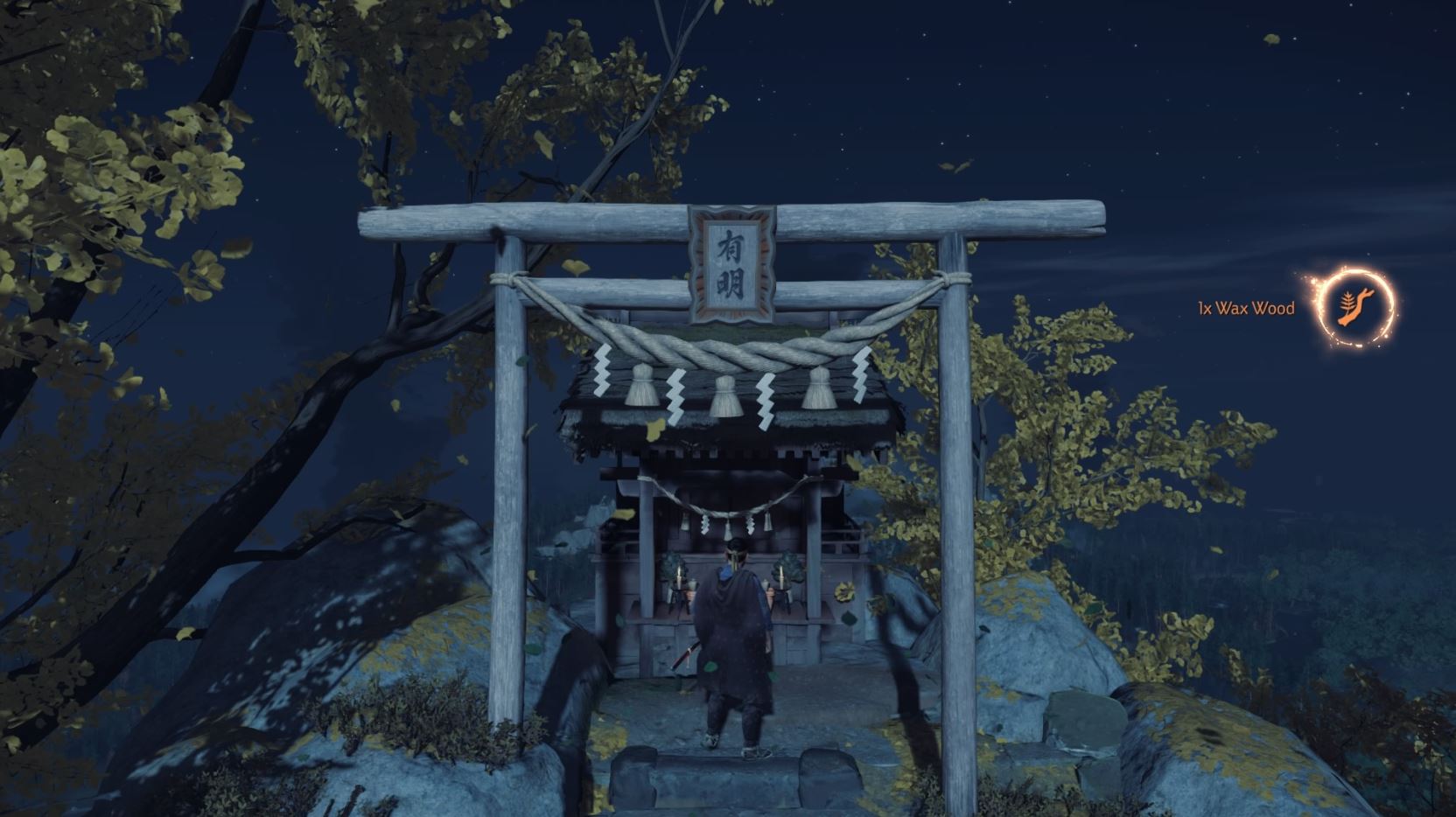 How to unlock more charm slots in Ghost of Tsushima

At the beginning of the game, you only have access to a limited number of charm slots. To get more, you need to visit Inari Shrines and pay your respects. These are different to the Shrines marked on the map, and appear as “Fox Dens”.

Follow your vulpine chum to the little shrine and you’ll make progress. Doing so four times will unlock an extra minor slot until they’re all available.

Once that’s done, you’ll be rewarded with special charms – which we’ll cover later – and be on your way to crafting the most powerful character build possible.

As well mentioned, there are a few charms which are much more powerful than the others. We’ll list them here, but be advised that there will be other locations visible on the maps showing their locations, which could be considered a spoiler. 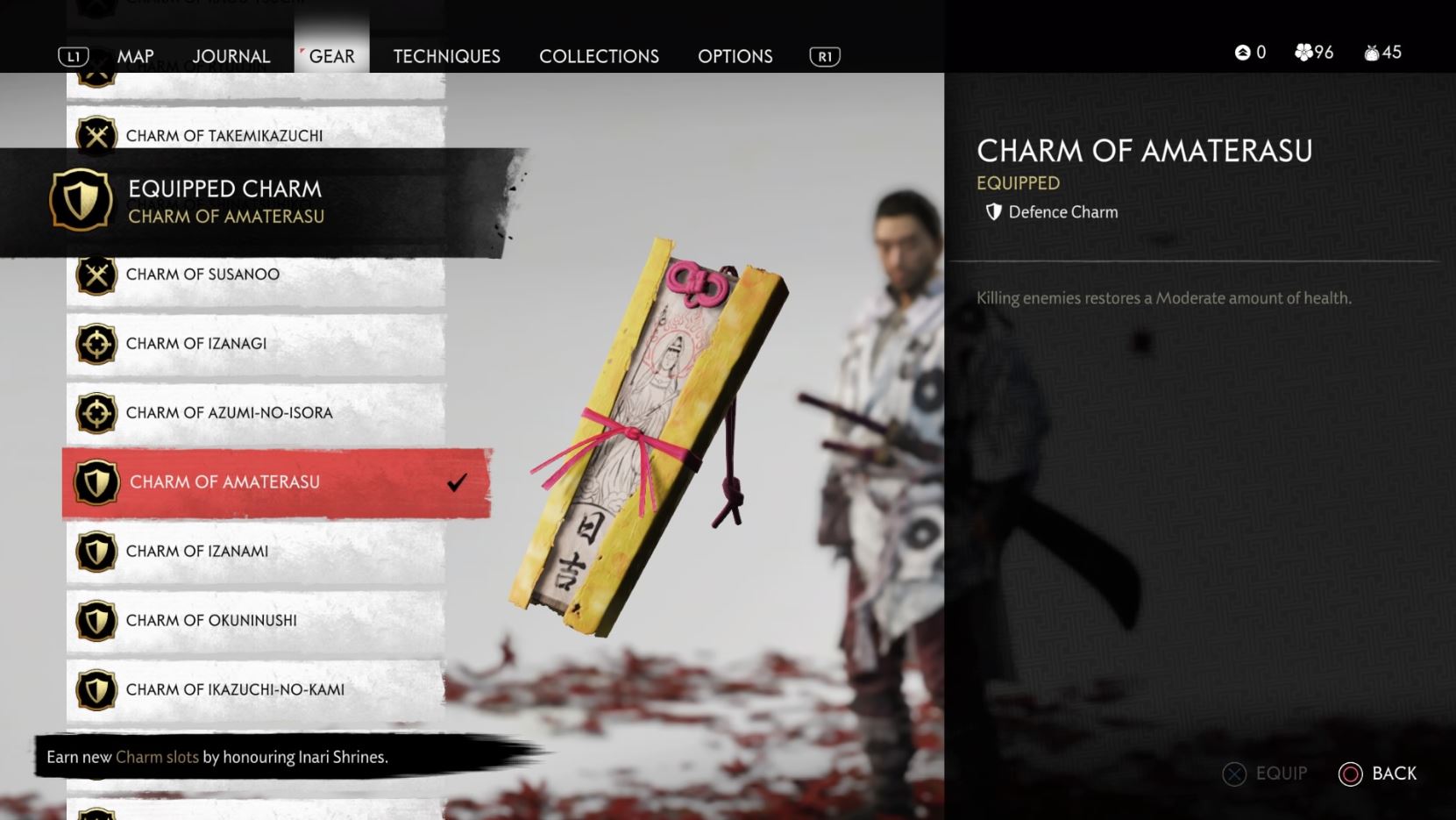 Across all of our playthroughs, Charm of Amaterasu has been a top-tier pick.

It’s available early on in the game, and stays pretty much unchallenged throughout the whole story. Passive abilities are always strong, but this charm keeps you healthy when taking on large groups – leaving you unworried by the constant chip damage that’s sure to come your way from arrows and unblockable attacks.

You find it at the Golden Summit Shrine to the south of Golden Temple in the middle of the Act 1 map – just northeast of the Winding Trail. 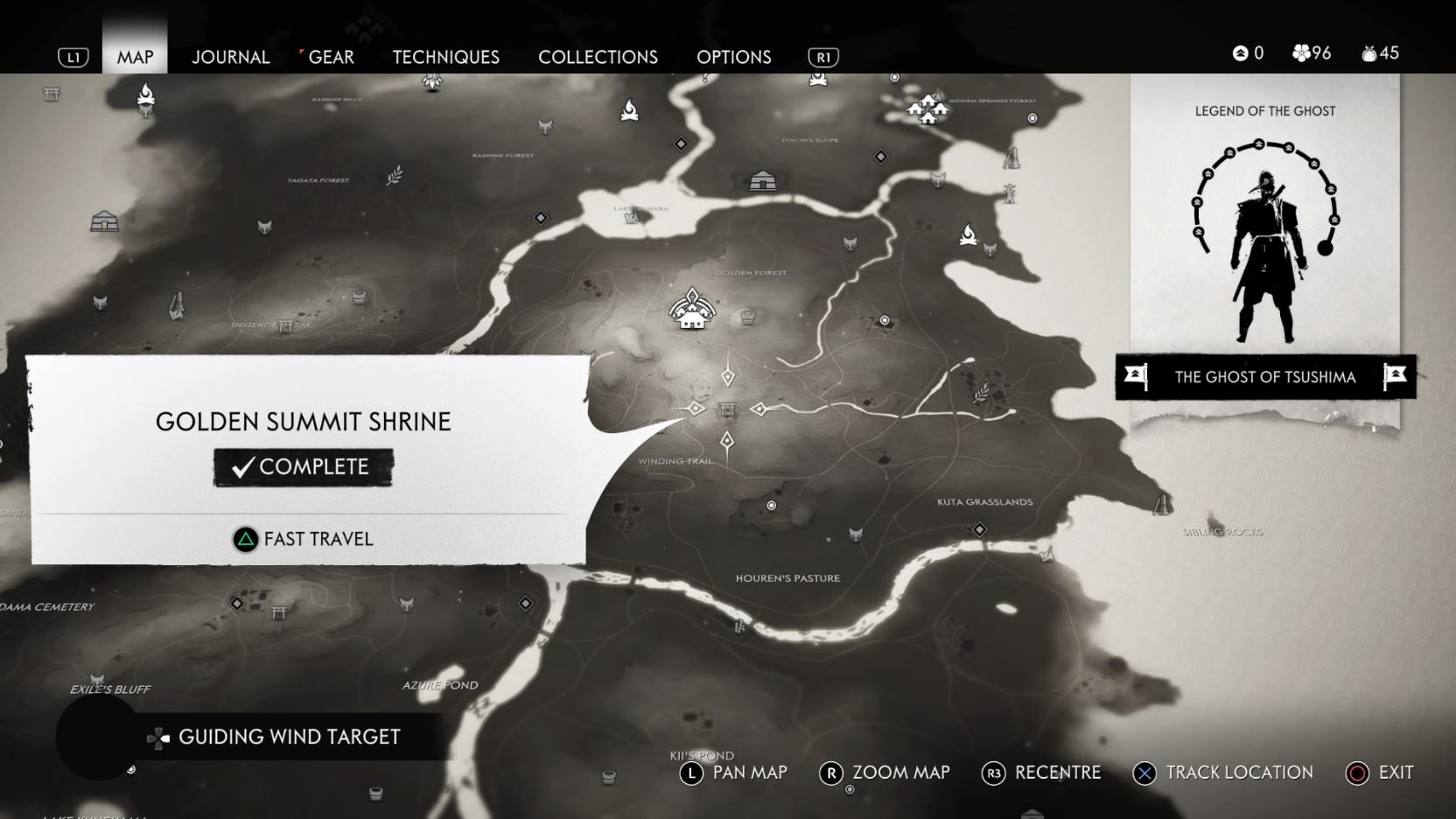 Charm of Mizu-no-Kami – Parries, Perfect Parries, and Perfect Dodges are easier to perform 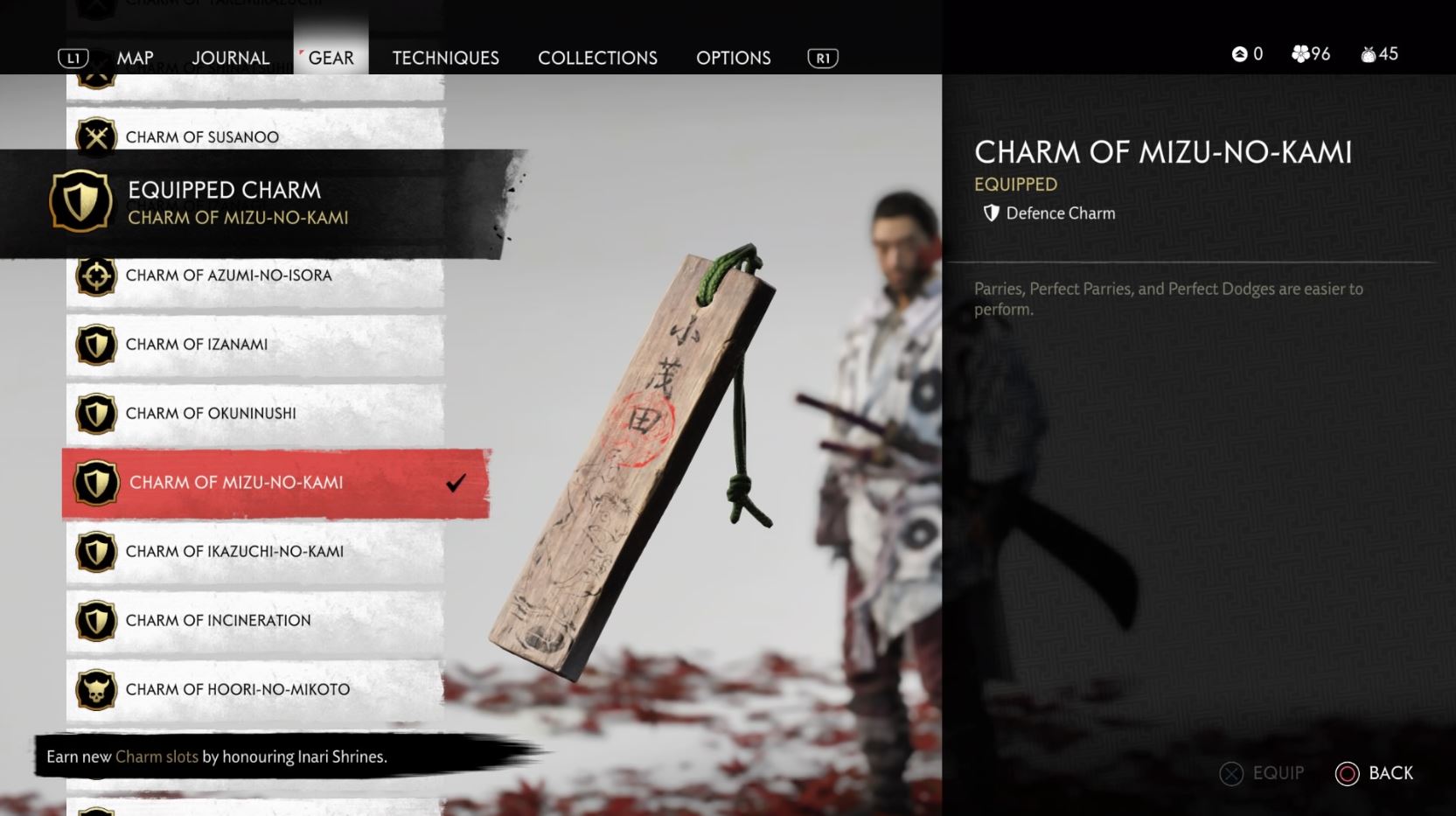 If you favour a melee play style, then mastering parries is vital. This charm comes in handy in literally every fight in the game, allowing you to proactively defend yourself more easily.

You find the Charm of Mizu-no-Kami at the Spring Falls Shrine in the centre-north of the Act 1 map, between Kukai’s Falls and Old Woodsman’s Canopy. 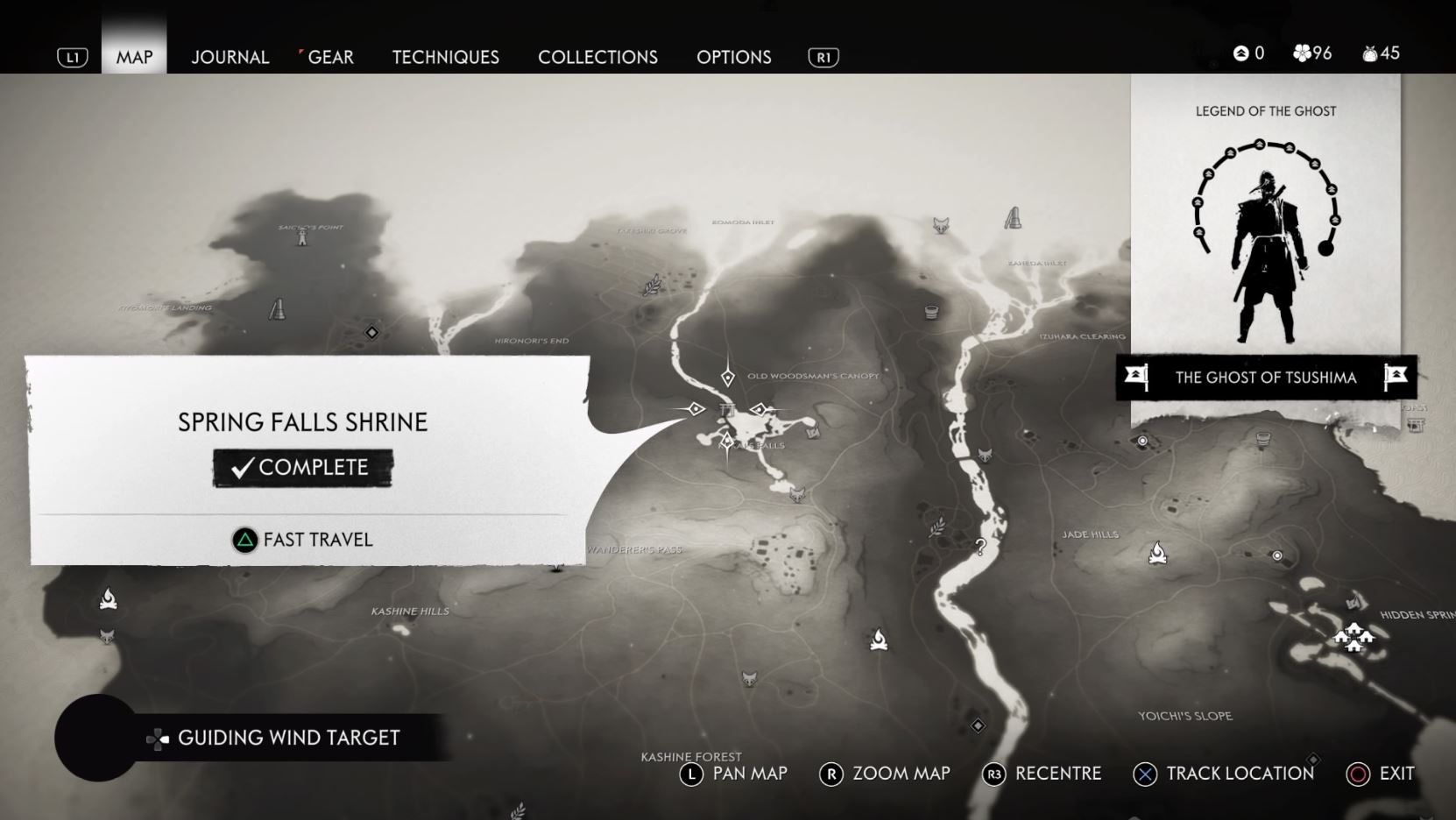 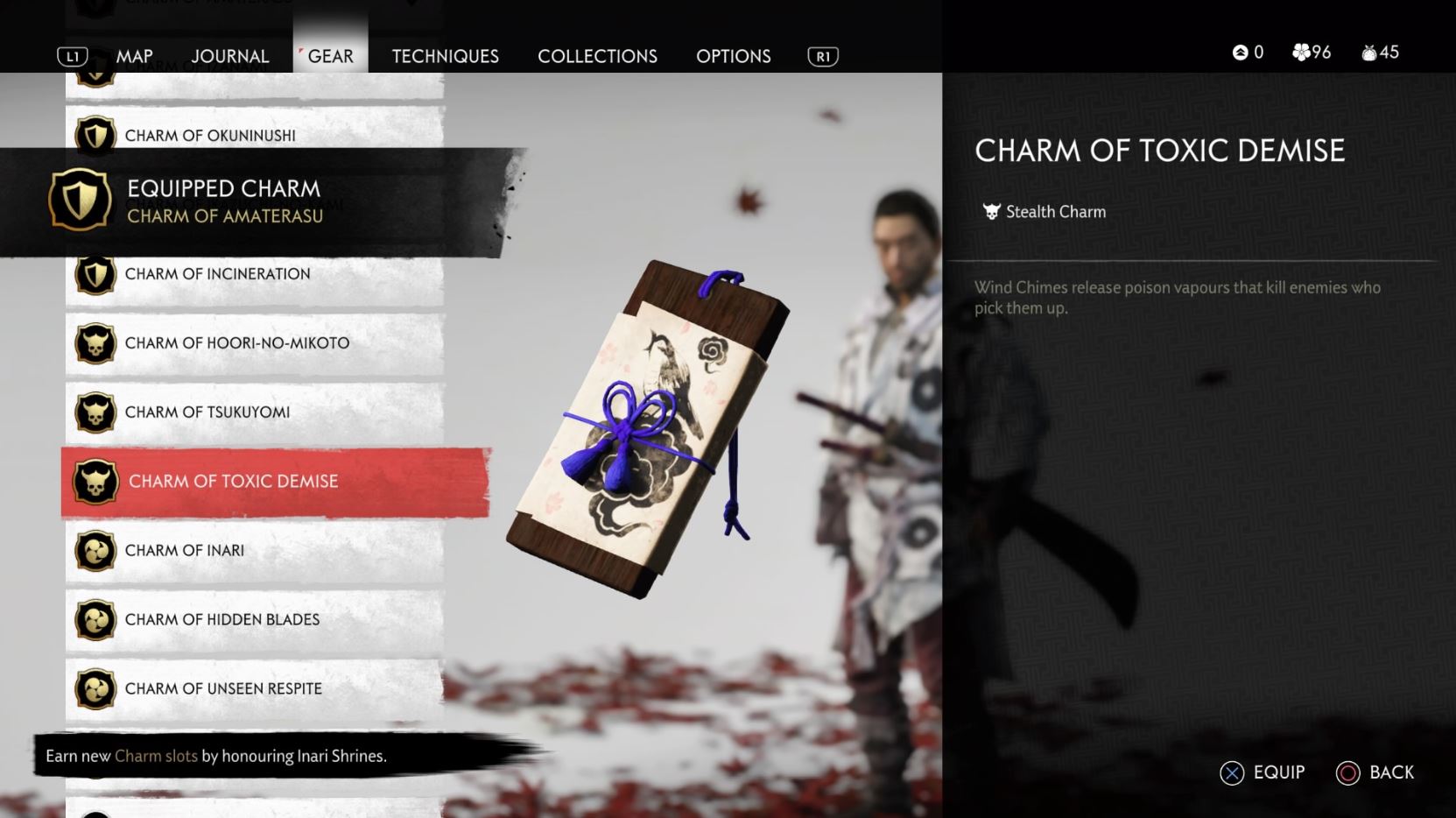 For stealth players, this adds another deadly weapon to your toolset, letting you thin out bunched up groups before moving in to sweep up.

It’s great for picking off isolated, armoured enemies at a distance which would usually leave you exposed.

This charm is your reward for reaching the legend tier: The Phantom Samurai. 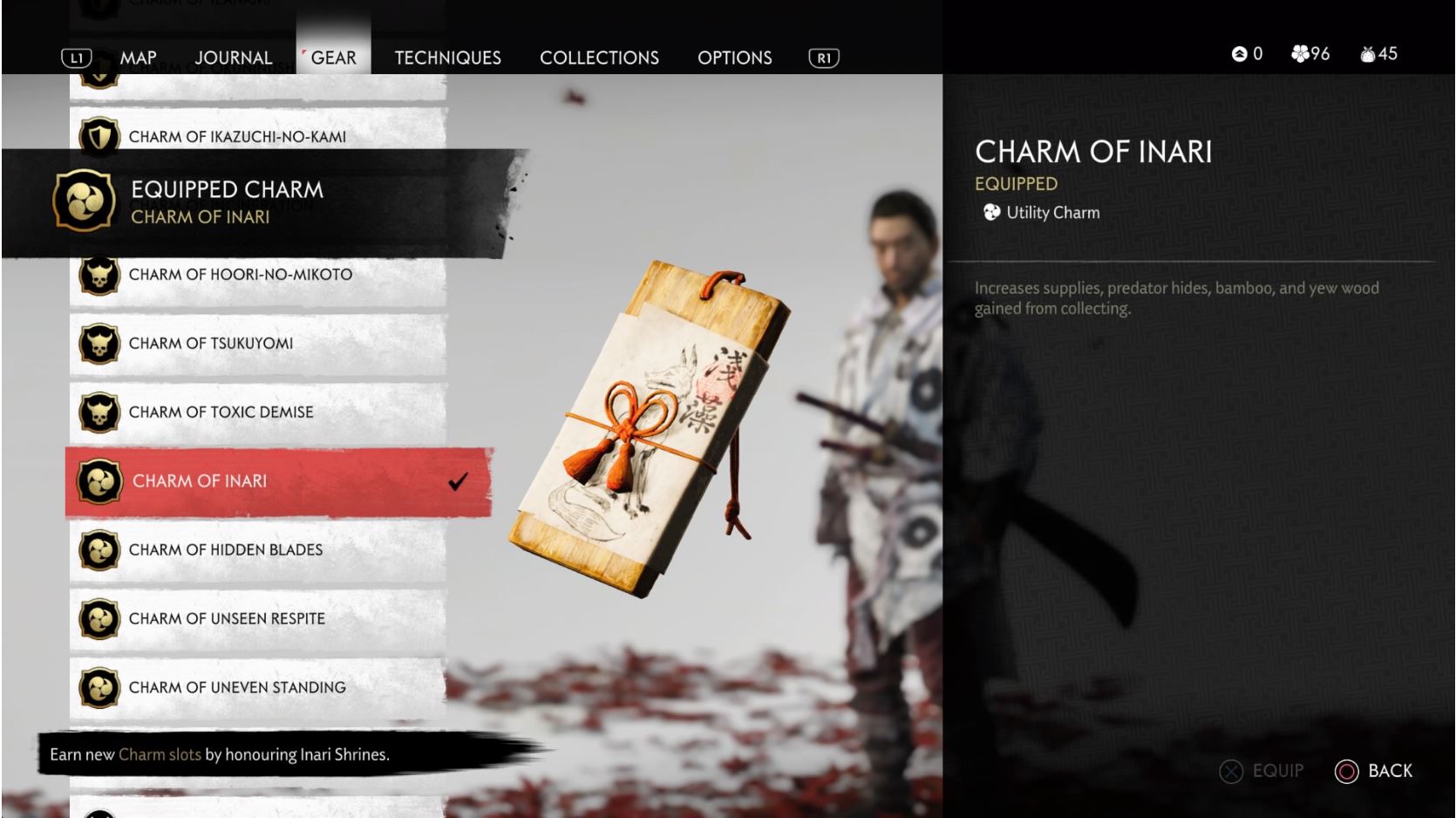 While this doesn’t affect rarer materials, it’s actually the more common items which cause a bottleneck when upgrading your gear.

Having this equipped in the background can make that grind much more forgiving.

It’s found at the Arrow Peak Shrine in the southeast corner of the Act 1 map, between Archer’s Rise and Sakimori Overlook. 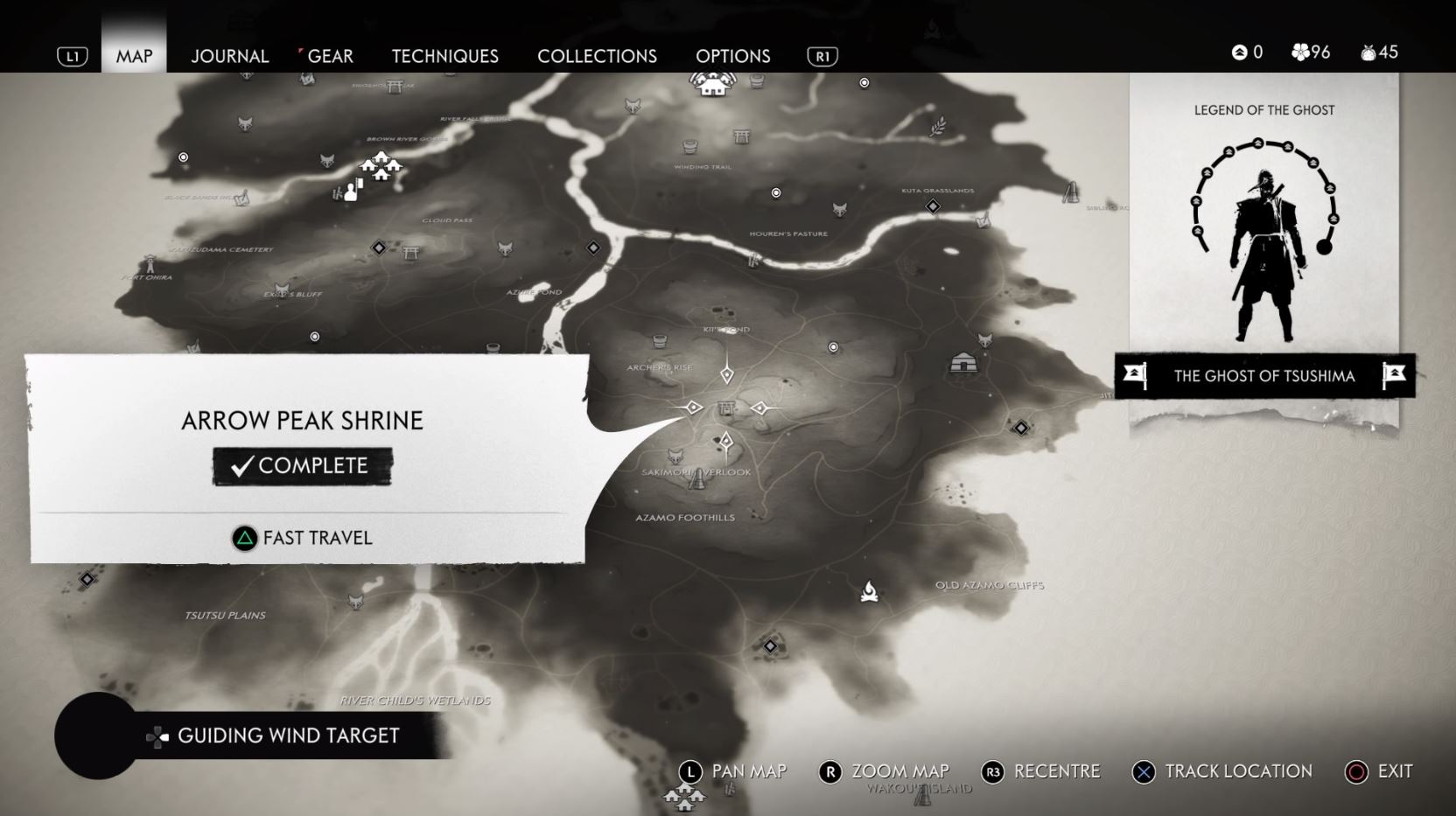 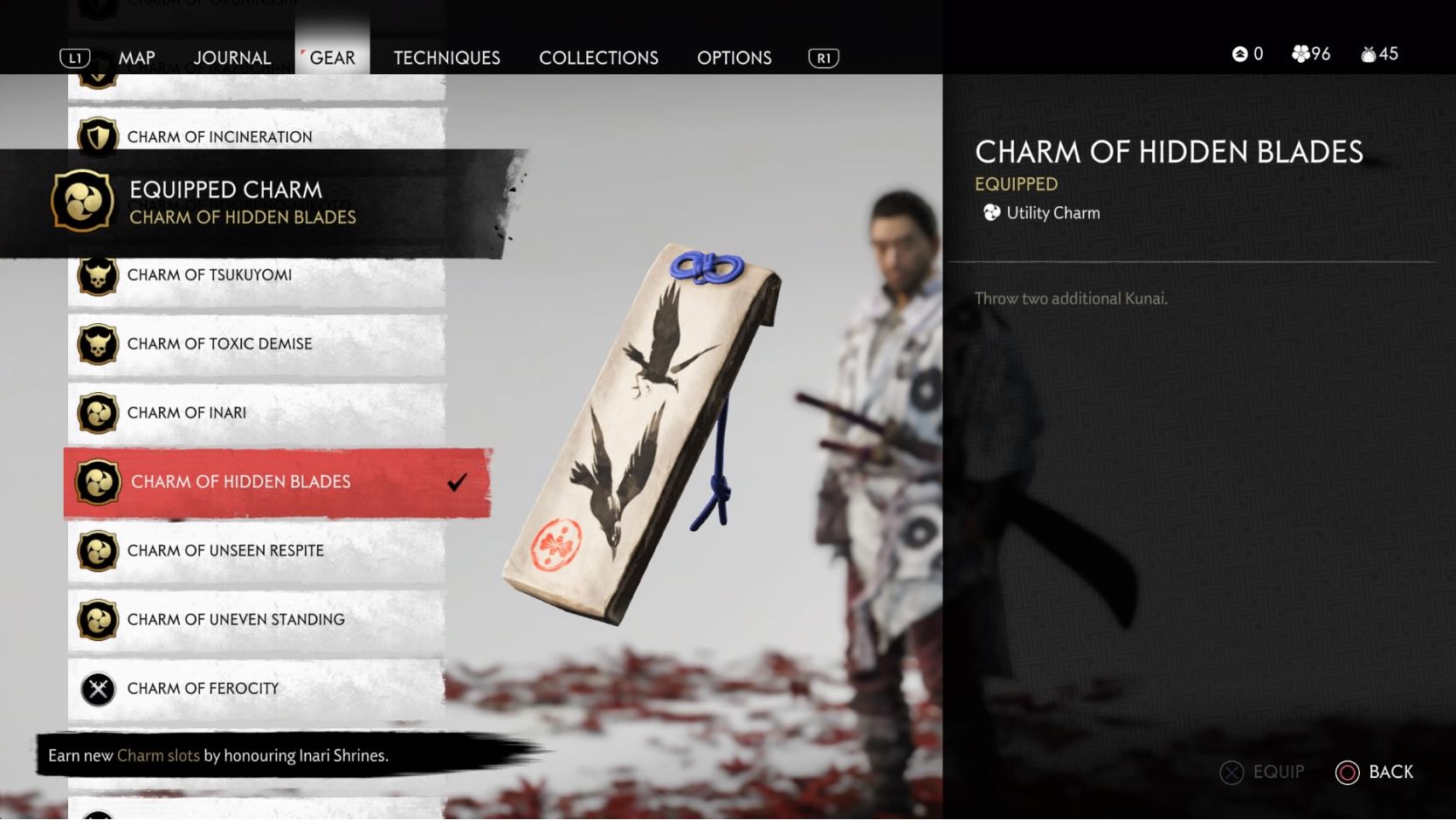 Ghost Weapon Kunai are very powerful, and this charm lets them go even further. With a fully upgraded tree, this means you can tag as many as 5 enemies with a single Kunai sweep.

This charm is your reward for reaching the legend tier: The Demon’s Blade. 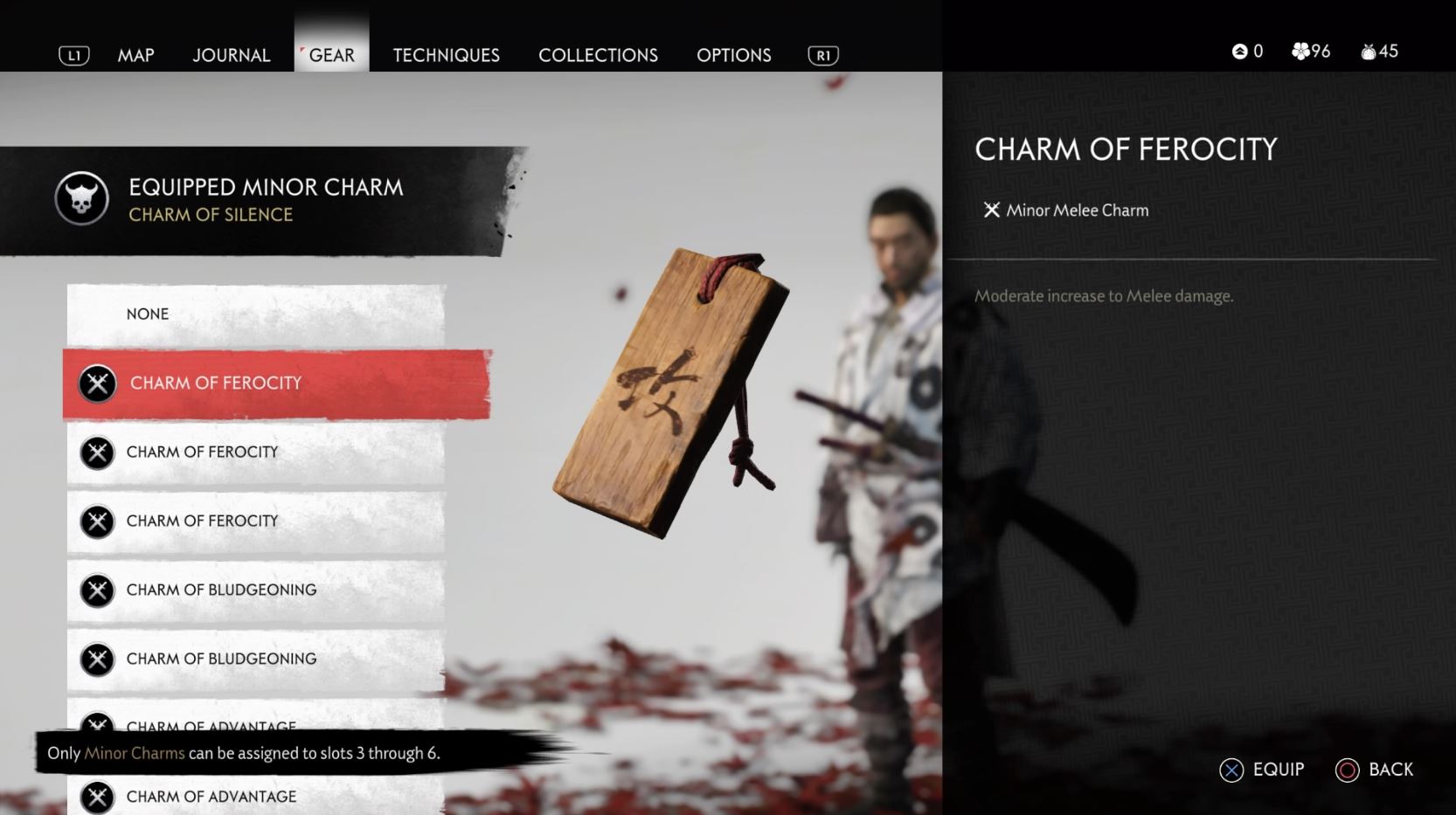 This is a strong, basic choice which you get from completing Tales of Tsushima which gift you a minor melee charm. Unless you’re a pure stealth player it’s never not going to come into play, so it’s an easy pickup.

Charm of Resistance – Reduces all damage by a Minor/Moderate amount 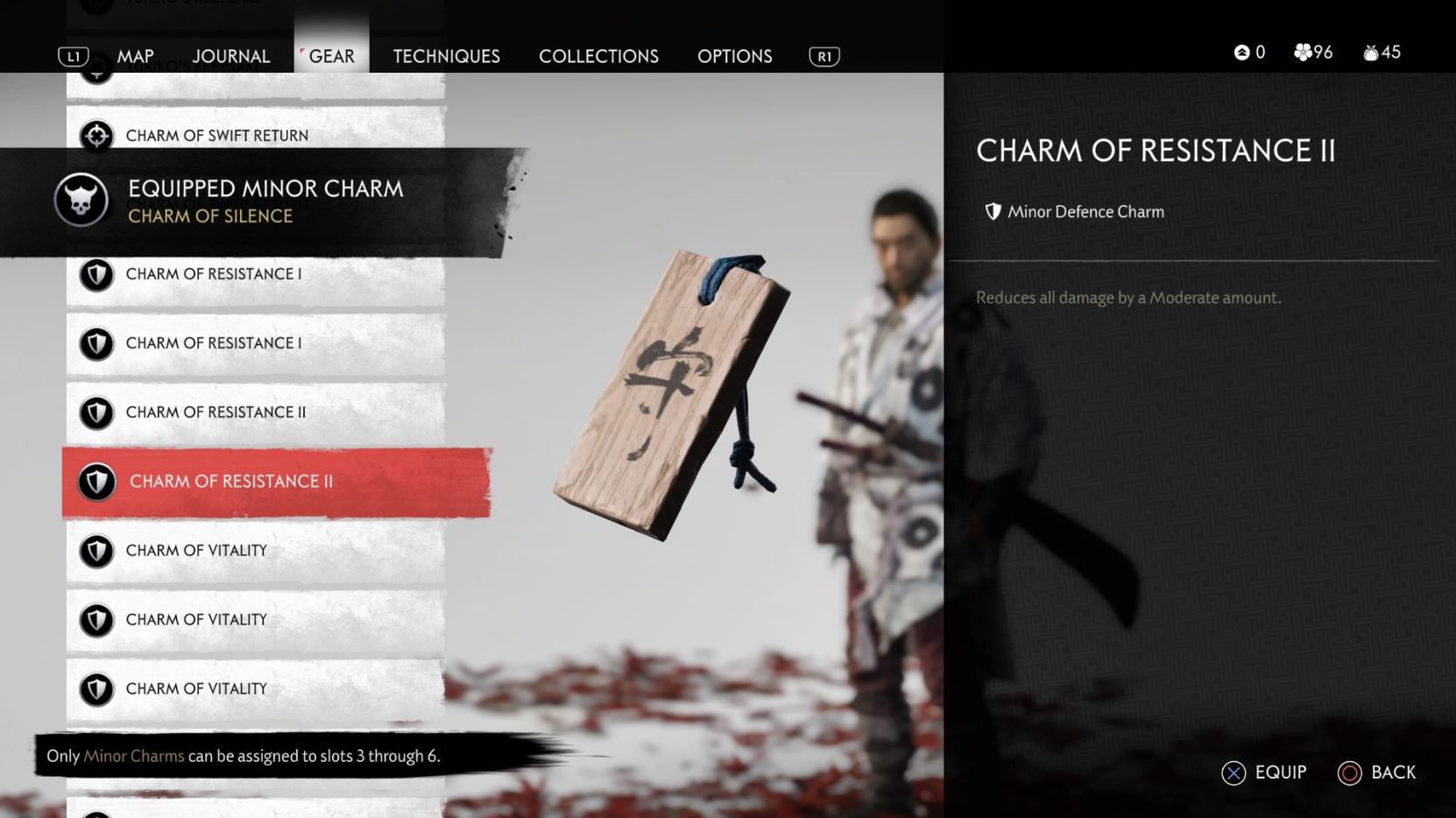 As with the last charm, this is another good basic pick and comes from Tales which give you a minor defence charm.

I tend to prefer this over charms of vitality which buff your health because you can easily raise your health with armour and keep it topped up with techniques and major charms. Or you could always combine the two. 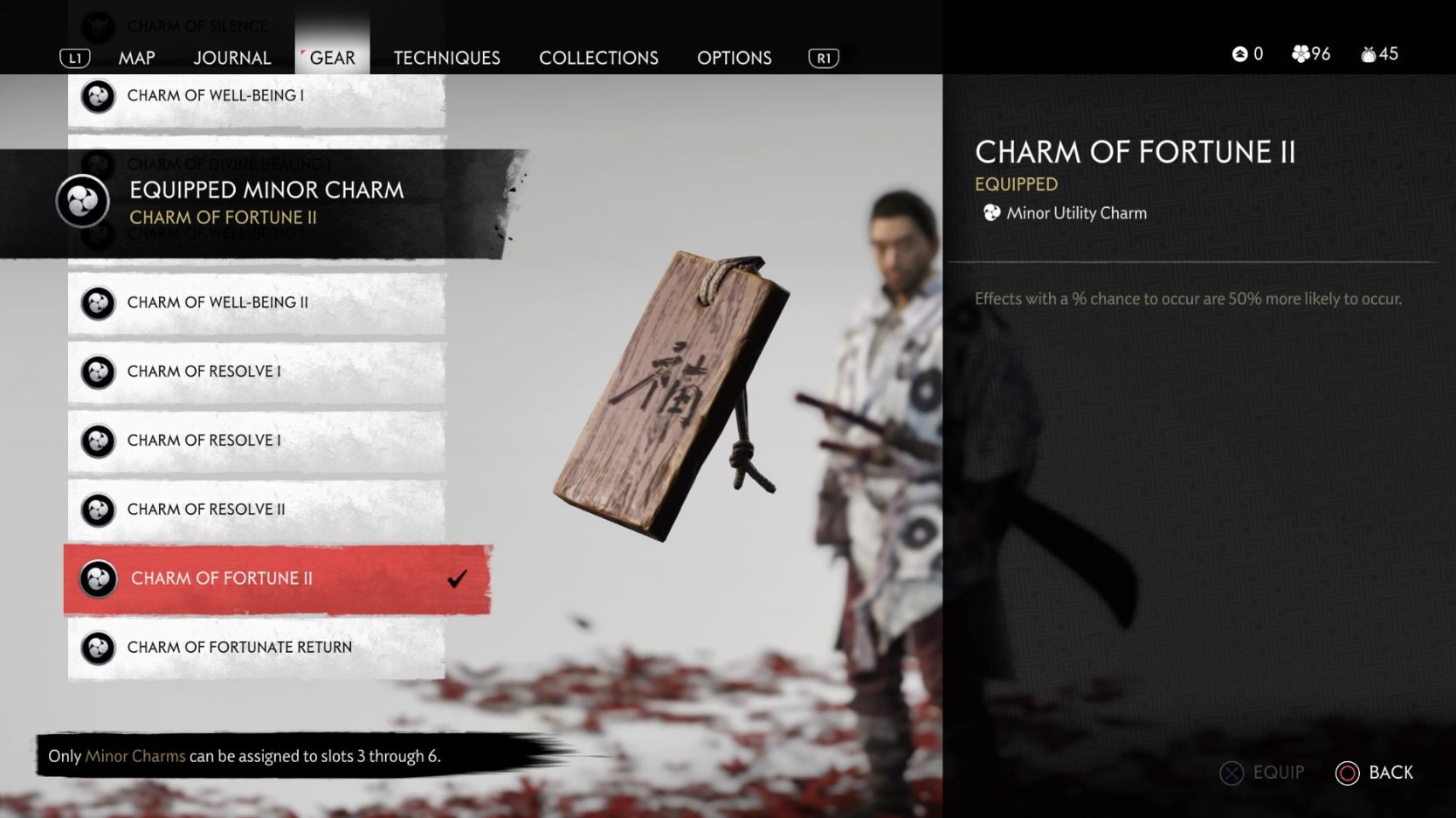 While a blanket buff to your damage is always good, it’s fun to shoot for the moon with a smaller chance that you’ll deal more.

The charm of fortune is great on its own, especially with terrify effects in the later game, but supplementing it with synergetic charms adds some depth to the charm metagame.

Dual destruction is a minor melee charm, while fortune is a utility charm. 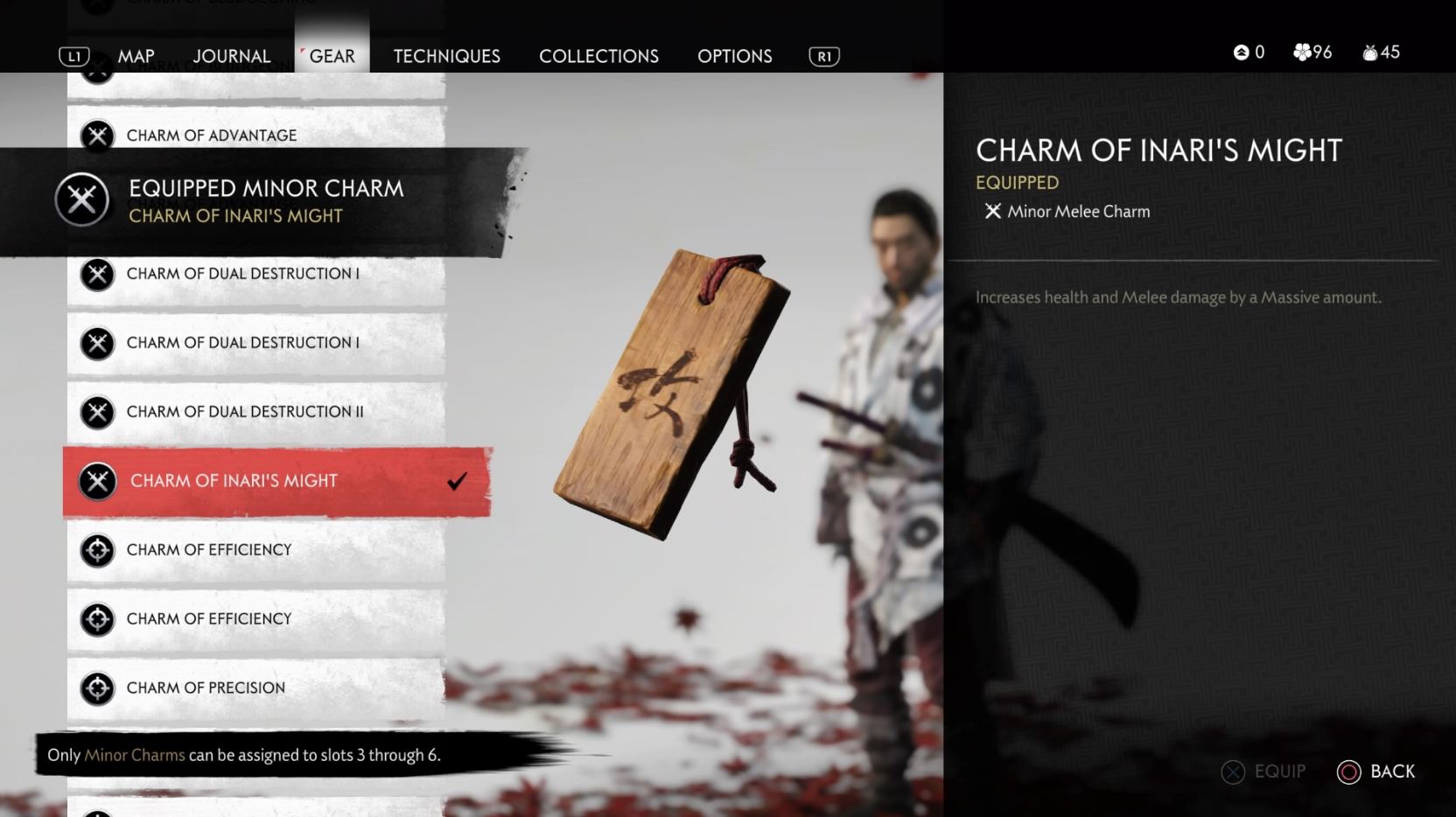 This is gifted to you for completing fox den shrines, and powers up until it gives a massive bonus in Act 3. It obviously takes a long time to get going, but if you put the work in, it’s the strongest minor charm. 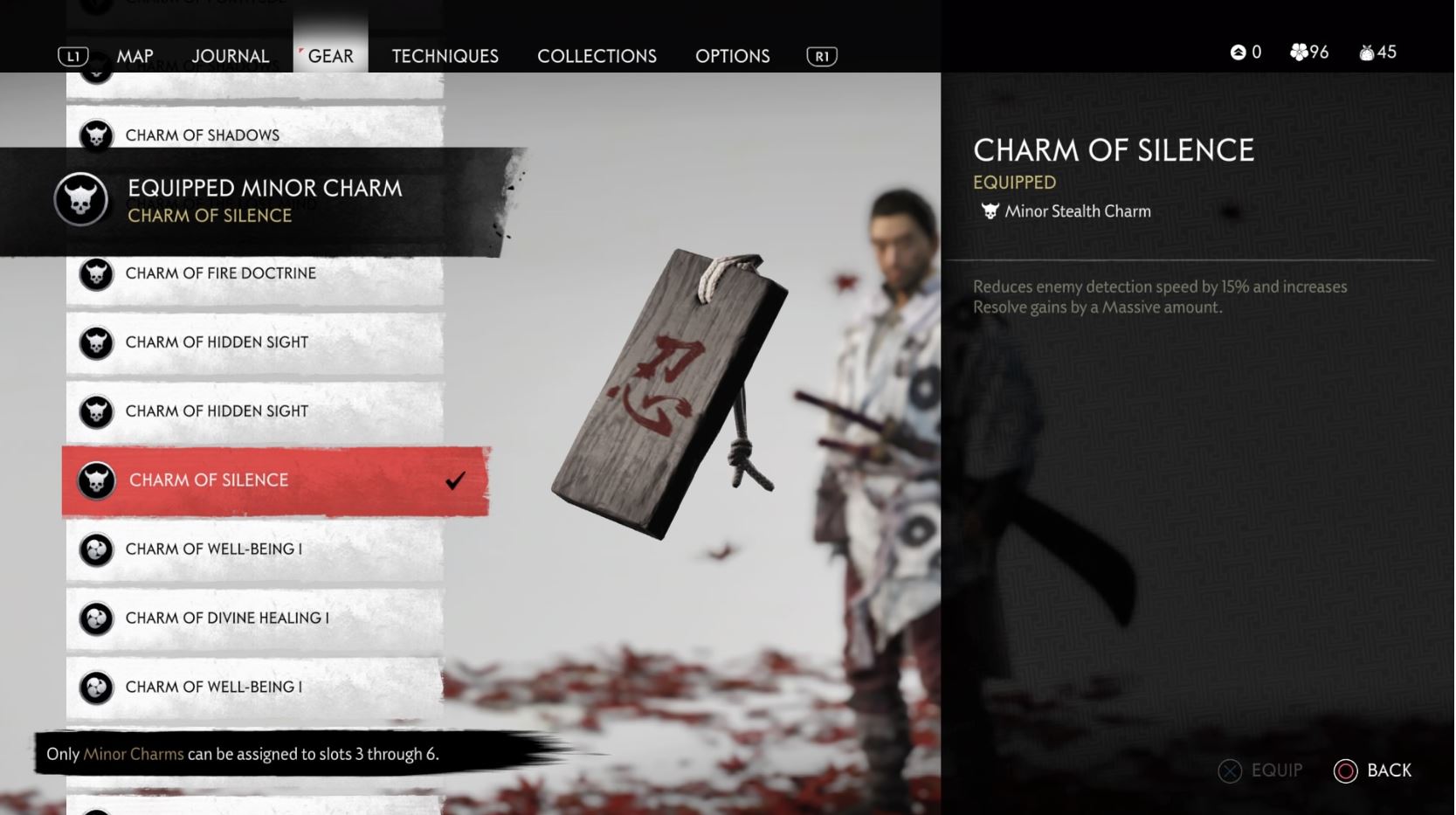 By that same token, the charm of silence is the stealth equivalent. Gifted to you for completing fox dens, this charm lets you pick off enemies unseen and build up large reserves of resolve to cut down the rest with special moves.

For more on building the best samurai build, here’s our page on the best Ghost Weapons and Techniques in Ghost of Tsushima.