Writing about representation as a trans woman sometimes feels like you’re surrounded by barbed wire.

There’s the obvious people who don’t like that you’re trans – or that you mention that you’re trans – but they don’t really matter. Much more importantly, there’s the pressure that you’ve got a platform other trans people often aren’t lucky enough to get, and so you want to do right by them, but you also want to stay authentic. There’s also the fact that my experience as a white trans person is radically different from those of trans people of colour, and that while women as a whole are traditionally both under represented and disproportionately discriminated, trans women get a lot more public oxygen than trans men almost everywhere. ‘Almost’ is the key word, however, as trans male representation seems to have found an unlikely ally in triple-A video games.

I wrote recently about how Lev’s portrayal in The Last Of Us Part 2, while imperfect, was a hugely important one. I didn’t think it was particularly odd that the trans gaming character I’d connected with the most was a trans man in Lev rather than a trans woman like myself, but when I realised he’d ousted fellow trans man Krem from Dragon Age: Inquisition, it did start to feel a little curious. Then I racked my brain to think of other examples of trans characters in triple-A games who’d left an impact, and I came up with Horizon: Zero Dawn’s Janeva: another trans man. Starting to get a bit weird now. I thought harder, and landed on Leo Kliessen from Tekken; he’s male presenting but is the only male Tekken character able to equip female accessories, and was confirmed to have been born female, named Eleonor, by Katsuhiro Harada at the Cologne premiere of Tekken: Blood Vengeance. However, the official Tekken website uses male pronouns for Leo. Whether that makes him a trans man or male presenting non-binary, I can’t say, but that makes four masculine trans people I called to mind before a single trans woman. 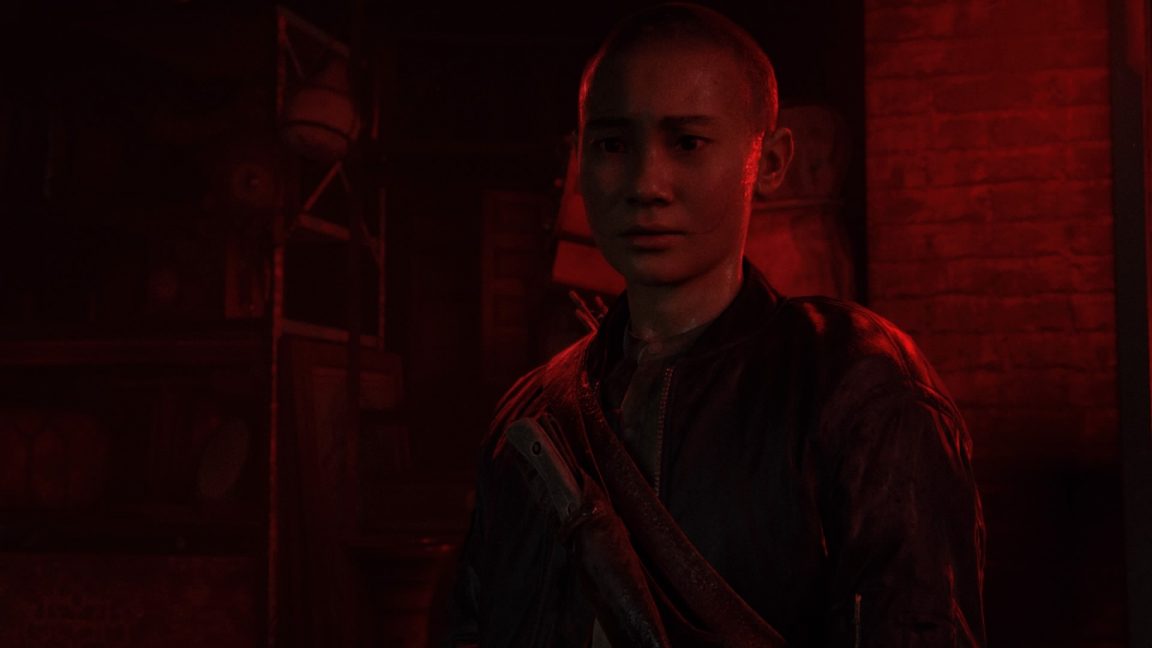 The next and final one I could think of without researching further was Tyler from the upcoming Tell Me Why, so that’s five. And not a single trans woman. When I finally dug around for some, I discovered why. There were no trans women in triple-A video games I had ever connected with. They existed, sure, but for a few reasons, I never found them particularly memorable or helpful.

First, that barbed wire comes back. Trans women have relatively few privileges, but media exposure, when directly compared to our trans brothers, is certainly one of them. If I asked you to imagine a trans person, you’d likely think of a woman. Maybe it was the likes of Caitlyn Jenner, Nikita Dragun or Laverne Cox from the world of celebrity or Kim Petras or Laura Jane Grace from music. If it was a character from film or television, chances are it was a woman too, as Wikipedia lists just ten examples of trans men and over sixty of trans women. Obviously, Wikipedia lists of that nature are rarely complete and several of the trans women examples are the subject of mockery, but there’s still a clear discrepancy in the raw numbers of representation at play. 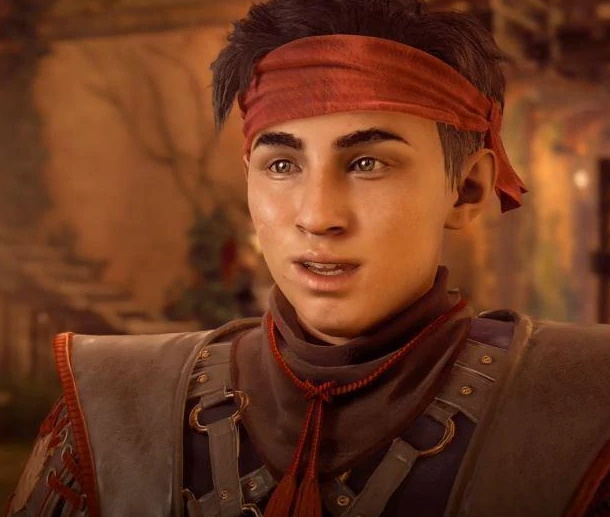 You will find fantastic trans examples in indie games, but indie and triple-A games move in very different circles, have vastly different budgets, platforms and conversations, and there’s not a huge crossover of general audience. They’re different beasts, and I’m treating them as such, but it’s true that games like If Found…, A Night In The Woods and Celeste feature brilliant trans women, while Astoria and 2064: Read Only Memories offer non-binary representation.

You might accuse me of being selective. Mass Effect: Andromeda has a trans woman in Hainly Abrams, but the game very clunkily tells you such straight away, and doesn’t even really seem to know why. Mizhena in Baldur’s Gate does the same, and while Janeva’s trans-ness isn’t delivered with the most graceful clarity in Horizon, he feels like the exception, while Abrams and Mizhena are most definitely the rule.

The worst part is that Mass Effect: Andromeda and Baldur’s Gate both seem to have their heart in the right place, unlike, for example, the slapstick beard reveal of Vilia in Breath Of The Wild. If we’re not being mocked, we’re made into villains, as we are in Catherine, Persona 3, and far too many more to list. 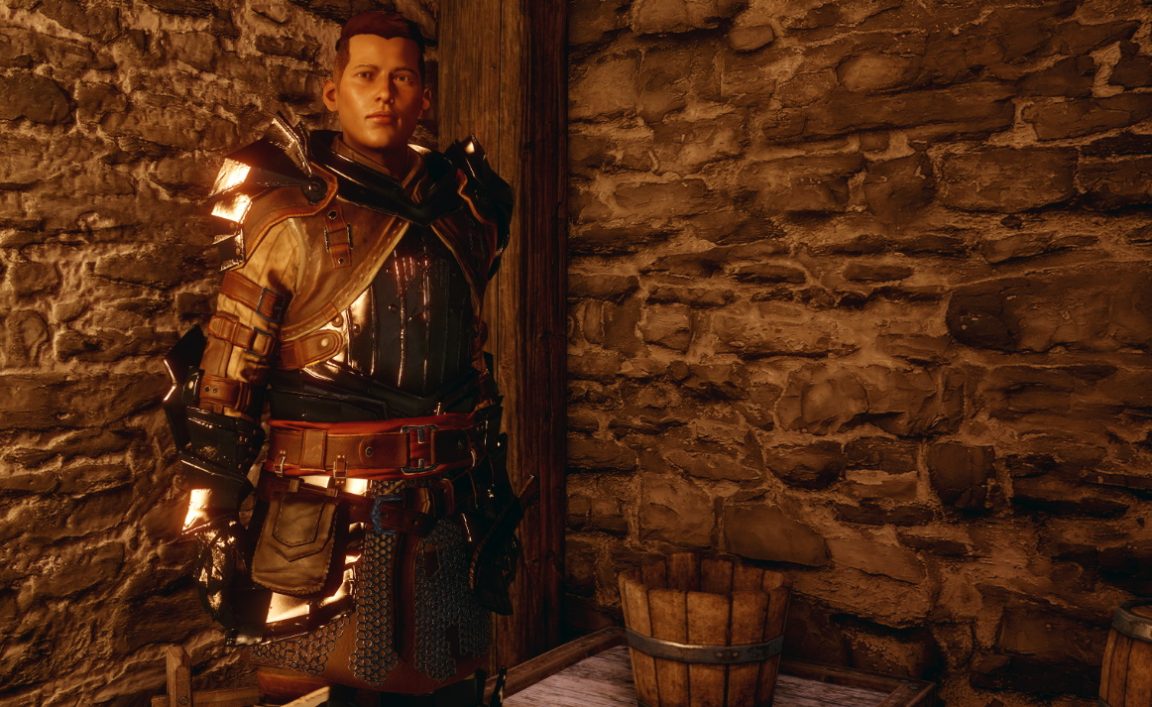 Perhaps it’s because everyone finds it easier to connect to people like them, and men still outnumber women when it comes to playing video games, and so a trans man is a smaller ‘jump’ for the audience to relate to than a trans woman. Again, the barbed wire tightens. As the numerous examples above highlight, trans men are desperately starved of representation in the public debate, so pitting my ideal imagined trans woman triple-A representation against the likes of Lev and Krem feels inherently wrong and unfair to everyone involved. It’s not the trans men who should give up their seat at the table, we just need to build a bigger one with room for more seats.

Though the trans men in games aren’t without their faults, their representation is leaps and bounds ahead of trans women in the medium, and offers up some of the strongest trans representation across all of pop culture; this is particularly important as trans men don’t often get to see themselves anywhere else.

A trans man could offer an even deeper, more personal insight into individual characters, but it’s clear that the rest of our entertainment industries could learn a lot from how video games depict trans men. Their stories resonate with a trans truth, yet the characters are more than just a stationary pole for the blue, white and pink. They’re people, real people, not there as a punchline or a threat but as a character to connect with. Triple-A gaming has become an unlikely ally for trans representation, and has shown other corners of media that it’s time for the spotlight be shared.