Your land has been invaded by the Mongols and there’s only one way to reclaim it: war crimes.

Ghost of Tsushima puts you in the role of Jin Sakai, one of the last surviving samurai on Tsushima Island following the invasion of the Mongol army. It’s a story about embedded belief systems and the willingness to bend that code to fight back against an overwhelming enemy.

It opens with a beach invasion where the samurai are summarily cut down by the invaders. You meet our antagonist, Khotun Khan – grandson of Ghengis, completely made up for this game – who is challenged to a duel by one of Tsushima’s strongest warriors. As he stands ready to fight, Khotun shows the Japanese warriors that he doesn’t play by their rules in a horrific showcase of barbarism. This sets the tone for the rest of the game as you attempt to push the Mongols back by facing them on their level, becoming the Ghost.

This shift from samurai to Ghost begins almost immediately. And while the game has some smart ways to portray this transformation – like how your increased cruelty is reflected in the behaviour of your horse – it’s too brisk to feel impactful. One minute you’re calling people out for honourable duels and the next you’re stabbing them as they sleep. Ghost of Tsushima attempts to moralise over this shift, but there’s no escaping your fate. As a player, the only thing going through your mind will be how to take out the enemy as efficiently as possible.

A samurai is trained from a young age to keep their emotions in check, which is fitting because Ghost of Tsushima barely made me feel anything at all. It doesn’t help that the story is so sparse, bogged down by busywork.

You clear its three regions like you’re ticking off a to-do list. You compose haikus to get new bandanas that don’t have an impact outside of looking a little different. You follow foxes to shrines – 49 of them – to upgrade your charms, which slightly tweak your ability to take and deal damage. You chop bamboo by following button prompts. You take hot spring baths to increase your health. Sometimes you find a new hat or a sheath for your sword. There are Assassin’s Creed-style climbing puzzles. 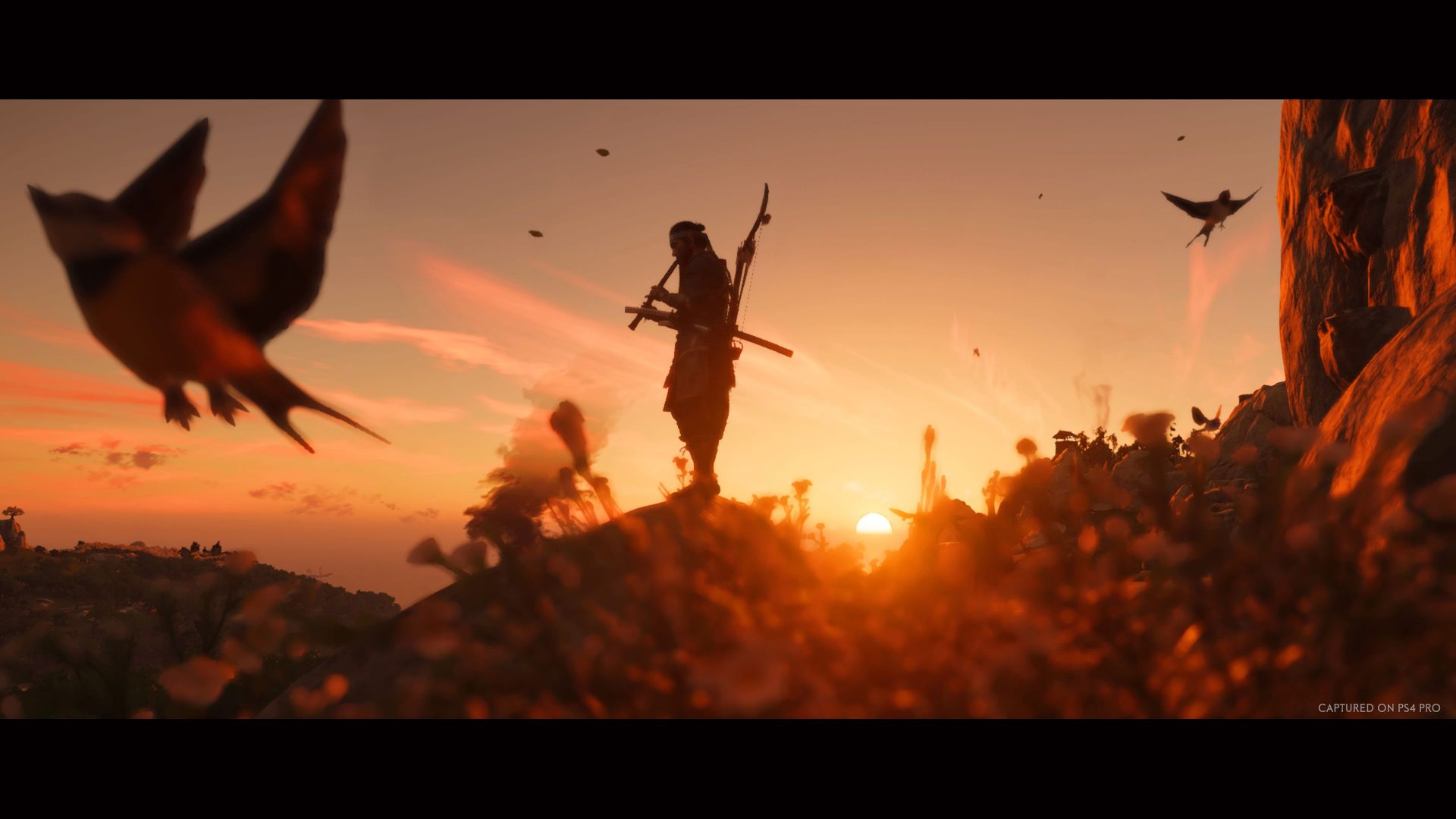 Main missions fare a little better, though these are plagued with archaic design issues too. Insta-fail stealth missions? Yep. Tail a man at a certain distance? You bet. A bit where you’re stripped of all your gear and you have to use the barebones stealth? Of course. Red barrels you can ignite with arrows? Damn straight. Missions where you can walk slightly out of bounds and trigger a game over? Yeppers. Outside of that, you’re either clearing out Mongol compounds or having a one-on-one duel with a boss.

The thing that carries Ghost of Tsushima is its world and the way you move around it. Instead of a minimap, you swipe up on the controller’s touchpad, triggering a gust of wind that leads you to your next objective. Pampas grass, trees, the string on your bandana – everything is in motion when the wind blows. It’s gorgeous. It keeps your eyes fixed on this stunning world when you’re exploring, rather than a map in the corner of the screen.

Fog hangs on distant mountains, golden light breaks through a canopy of brightly coloured trees as leaves rain down, murmurations of birds dancing overhead. In the night, fireflies bathe graveyards in a peaceful glow. Gnarled black forests, golden woodlands, poppy fields, frozen tundras, impossibly large fields – this is a world that begs you to dive into it. It’s just a shame there’s barely anything worth exploring it for. 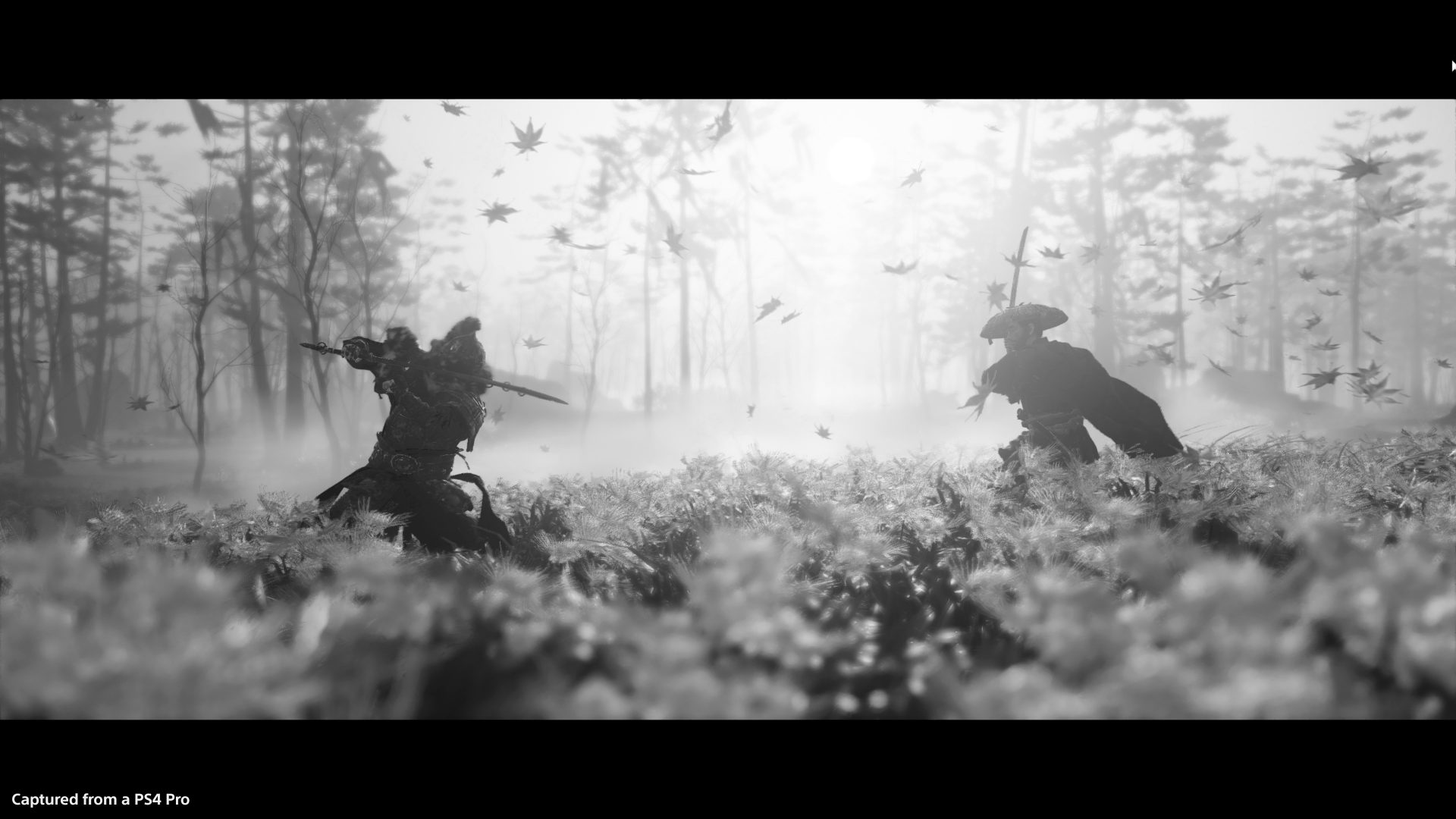 The wind might guide you, but you’re still setting waypoints on a map and clearing up icons that represent tedious, repetitive content. If you visit all the baths, your reward is the option to run around fighting the Mongols while wearing nothing but a towel. The grind isn’t worth the effort, and you’ll likely have the story finished before you unlock these daft extras anyway.

Then there’s the believability of that world, which breaks when Jin phases through thin bamboo trees. Ghost of Tsushima, indeed. Sometimes you stealthily kill a man and he falls in a canned animation, poking out over a ledge onto some invisible death bed – bodies don’t have physics upon death. If you creep up behind a man who’s crouched, he will politely stand up so you can stab him in the neck and play the animation out.

That stealth is old school as well. You can hide in long grass or behind cover, but there’s not really a cover system – Jin doesn’t interact with walls. You can’t even kill over cover or around corners – you have to get right next to an enemy unless you’re jumping down from above. Even if you’re hanging below an enemy, you can’t pull them over the edge for a kill – Jin instead jumps up and slashes at them. 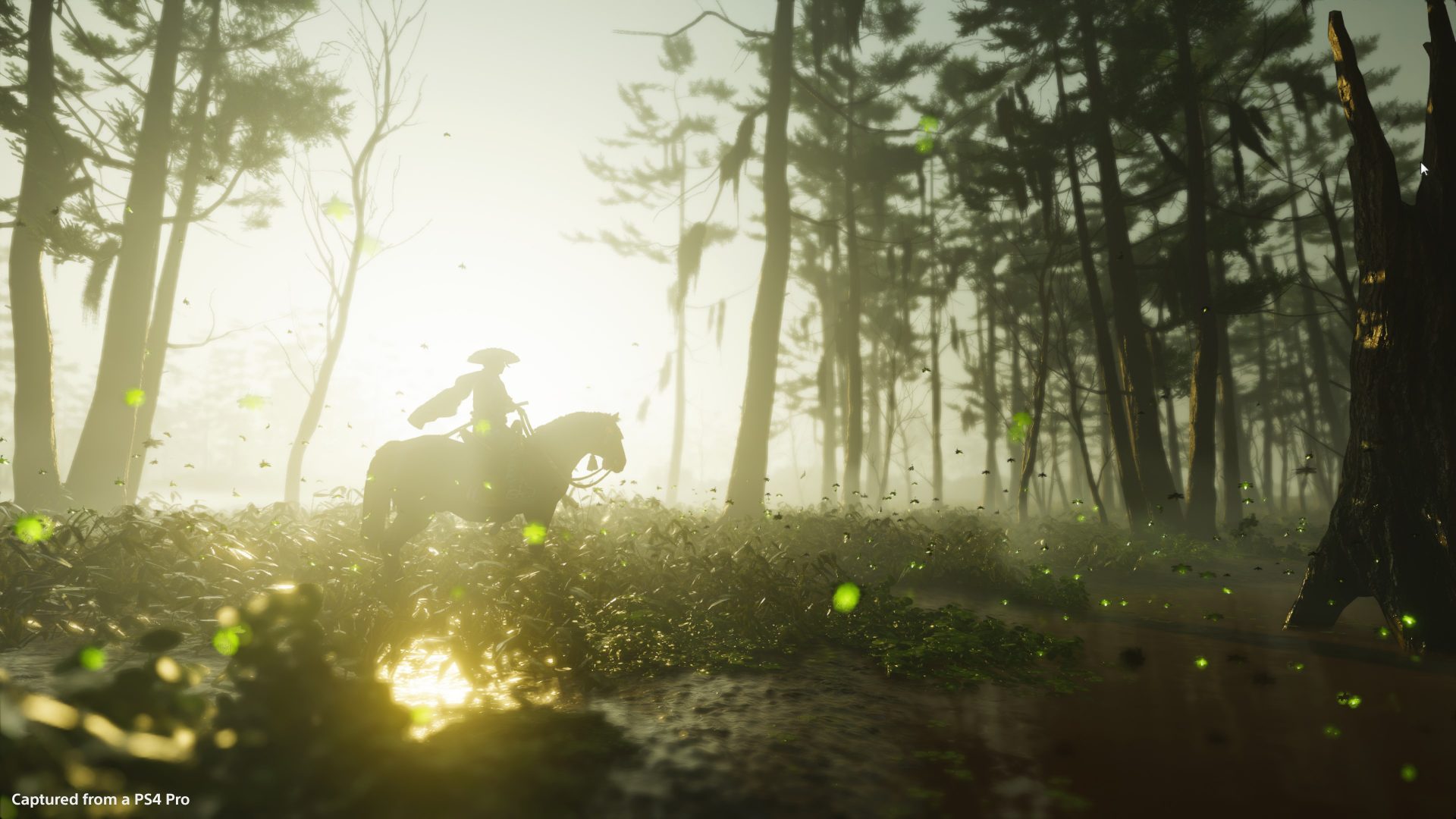 Later on you unlock the ability to chain up to three stealth kills together, and you can also assassinate people through screen doors, but those are the only calculations you’re making as you clear out compounds: how can I get these three enemies together for a chain kill? Will that guy pass under that wire so I can jump down from above? Will anyone see?

Of course, you can engage at range too. There’s a short bow for enemies with no armour and a heavy bow for those with helmets. There’s a satisfying feeling of heft to the shots. But again, you’re usually just using it to thin the edges of a camp so you can clear out the middle without archers on watchtowers spotting you from their overwatch position.

Actual combat fares a little better. It’s simple, but effective. Swords feel deadly and action is instant – important for an action game. You can interrupt swings to pull your sword up for a parry. It’s no button masher. 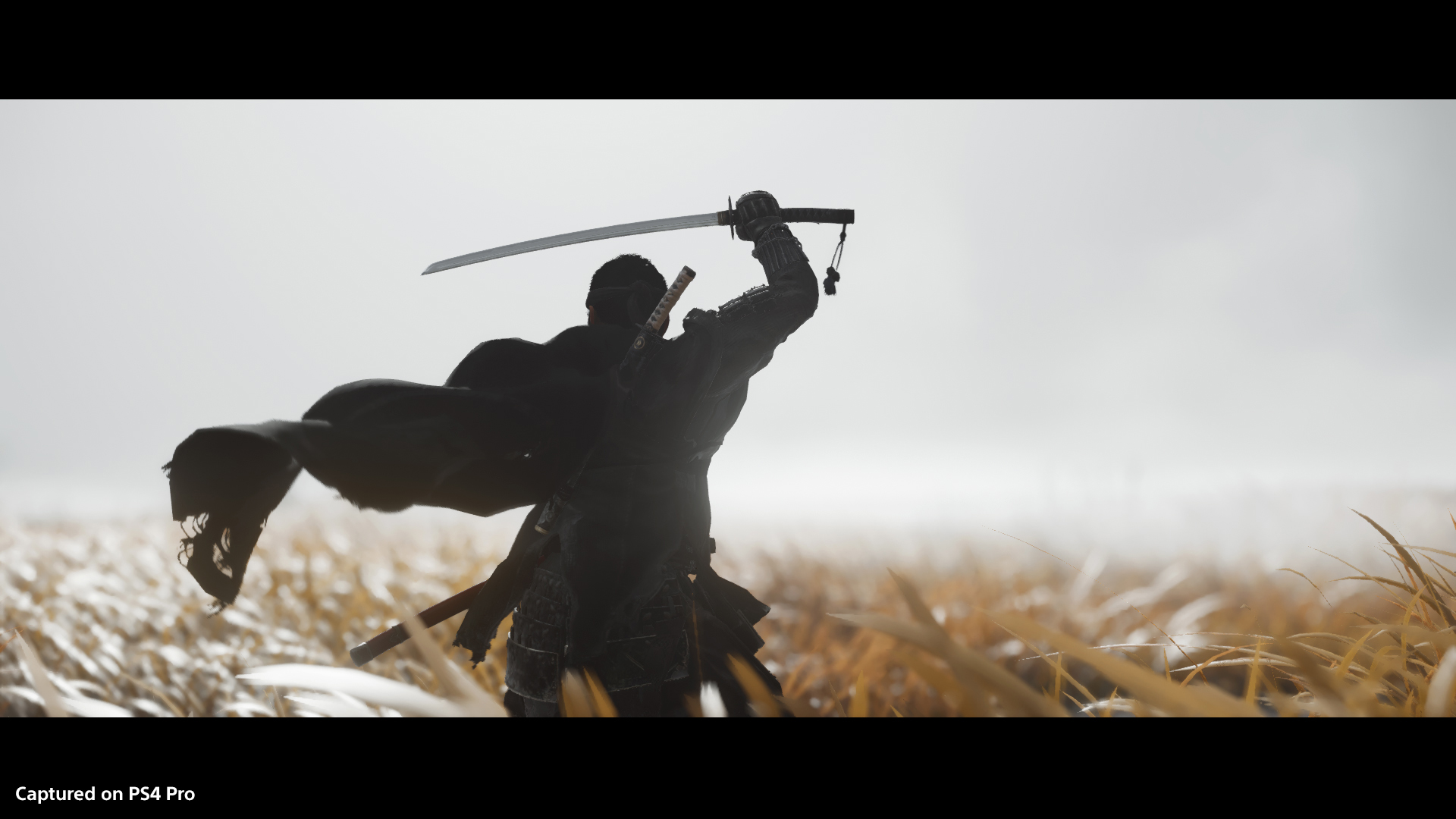 You switch between four different stances to combat different enemy types, and there’s a mid-game ability that makes you feel unstoppable, accompanied by a cool visual trick. I won’t spoil it here, but that’s when limbs and heads start flying. I also have to give a shout to the way you can manually sheath your sword with a little swipe of the touchpad, drawing your finger across as Jin flicks the blood from its edge or wipes it across his sleeve. It’s almost ritualistic.

The one-on-one duels are Ghost of Tsushima at its best. Here it forgets about those four stances being used for enemy archetypes and you’re free to switch between them all, stringing your own combos together to bring down a dangerous enemy. It also helps that these automatically lock you on to your foe, whereas fights against groups have no lock on at all, sometimes leaving you swinging your sword into the air like you’re the one who’s scared of ghosts. 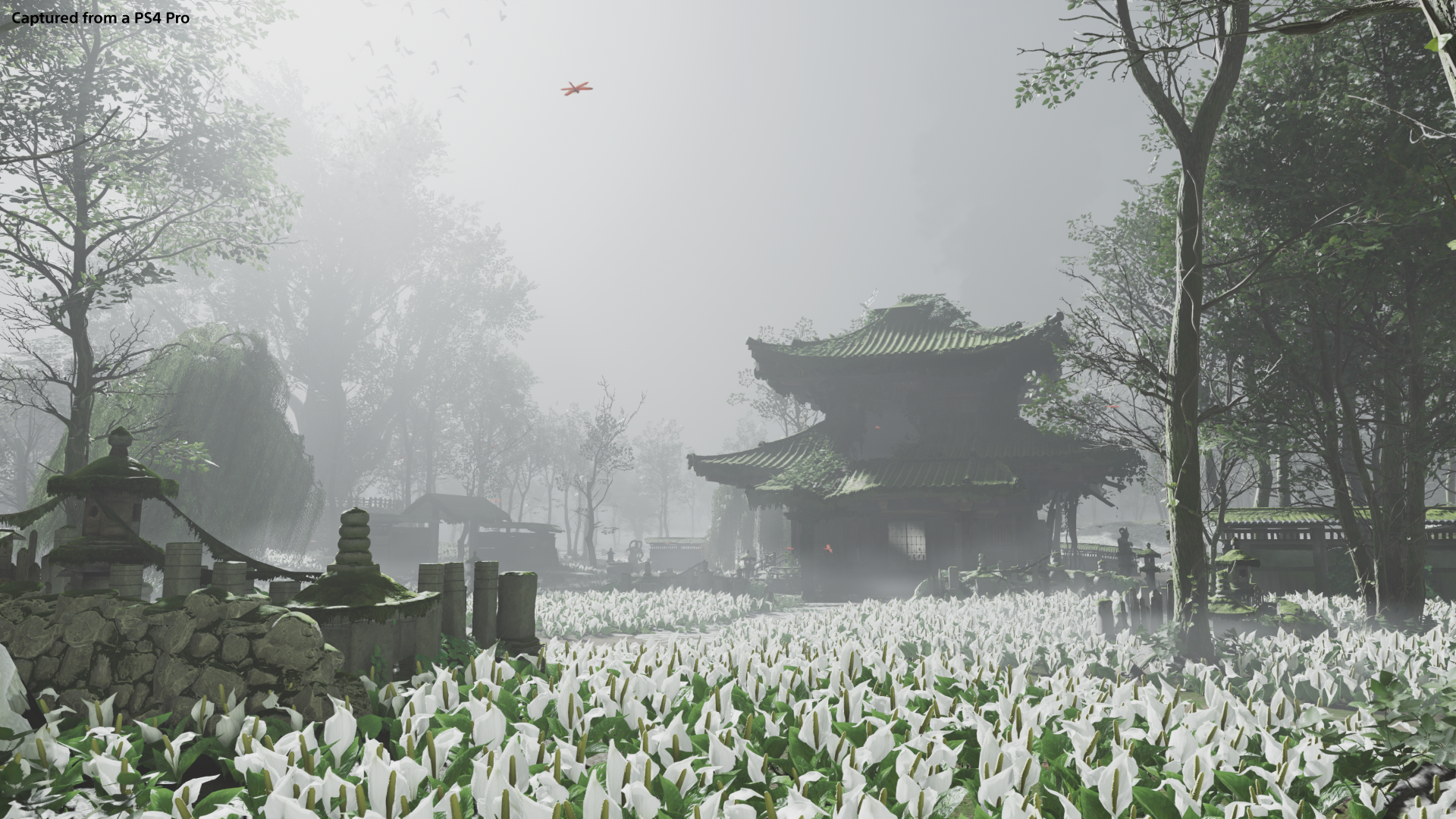 As you lean into your Japanese Batman persona, the Mongols become more and more terrified of you. Sometimes you’ll kill one of their allies and their friends will stumble backwards, crawling away, opening them up for a sword through the belly. Sometimes they’ll down tools and leg it. Walking up to an archer, sword raised above your head, sidestepping and deflecting incoming arrows – it’s in these action sequences where Ghost of Tsushima excels.

It has its moments, but like Jin Sakai in the opening hours, the past holds it back. It’s Open World: The Video Game. It’s far too easy, too – the lack of consequence for failure makes it feel like you’re just going through the motions. If you’ll excuse the wind-based pun, it’s a breeze. While playing it, I often found my mind wandering. By the third and final act, I just wanted it to be over. Like the samurai, Ghost of Tsushima feels like a relic of a bygone era.

You can sneak on over to Amazon US to pick up a copy of Ghosts of Tsushima in time for release this week, or if you’re in the UK you can find it here.