A new monster has been added to Monster Hunter World: Iceborne and it’s a bit of a grind to beat it.

The Alatreon is finally available to take on and you’ll be able to craft a bunch of weapons and armour once you’ve defeated it. A word of warning, however: even high-level Master Rank players are going to find defeating the Alatreon a real challenge, so if you get your arse handed to you on the first go, try not to worry about it. 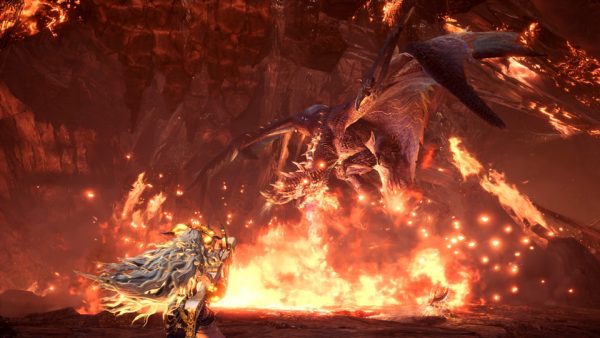 How to begin the Blazing Black Twilight quest

First off, you need to pick up the quest to find and defeat Alatreon. You can find the Blazing Black Twilight quest in the Master Rank Special Assignments folder. You’ll need a Master Rank of 24 or higher and you have a time limit of 50 minutes to defeat it. You’ll be able to find Alatreon in the Secluded Valley and it will always begin in Fire Active mode for this quest. 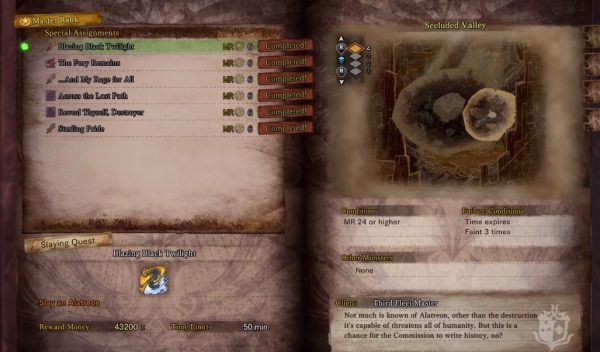 Once you’ve beaten it once you’ll then be able to face it again in event quests. If you see a quest called The Evening Star, it’ll start the fight in Fire Active but if the quest is Dawn of the Death Star, it’ll begin with Ice Active. This will influence what elemental type you should take into the fight, but I’ll explain the fight cycle below.

Alatreon is a black elder dragon, so it’s pretty obvious you’re gonna have a challenging fight on your hands. It can switch appearance during the battle which in turn changes its elemental attack type and as well as its weaknesses. It can also send out a powerful shockwave called the Escaton Judgement that can wipe you out pretty fast, so you’ll want to have a range of elemental attacks available in your arsenal. It would also be prudent to equip an Astera Jerky for later in the fight. 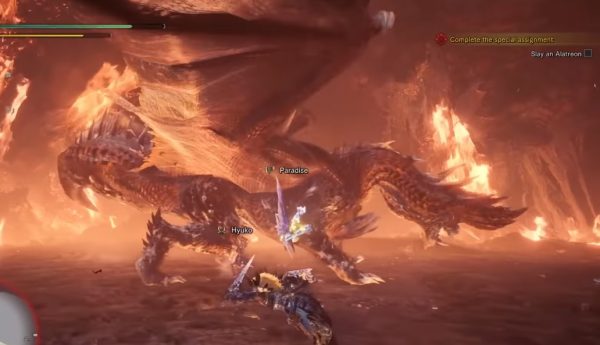 If you’ve dealt enough elemental damage, you should be able to heal and continue to damage the Alatreon throughout the fight but if not, prepare to die. You’ll need to heal a lot during this battle – I really can’t underline that enough. You want to deal enough elemental damage that Escaton Judgement will become a weaker attack, allowing you to survive longer.

Another key thing to remember is that the only time you can damage Alatreon’s horns is when it’s in Dragon Active mode and is the last point in the cycle you’ll have to suppress the Escaton Judgement move before it is released. If you manage to break its horns, it won’t be able to switch to the next element.

This means that if your setup leans heavily on Ice damage, you won’t want it switching to Ice Active in the final phase, so bring something with high damage to make sure you inflict enough Ice damage in the Fire stage and can break the horns in the Dragon stage.

This cycle can happen two or three times until Alatreon is dead and it would be a very good idea to team up with a few pals to tackle it. Attacking its hind legs is easier and safer in the first section of the fight, and it would be a good idea to bring the Temporal Mantle to clutch claw your way onto its head to break the horns in the Dragon phase.

The Alatreon has different weakness types for each of its forms. It’s breakable and severable points don’t seem to change throughout – namely the head, wings and tail – so you can hack and smash them as usual.

You won’t be able to brute force your way through the fight; elementals are key to success. Your aim is to make it flinch by using the element it’s weakest to – you’ll know you’re doing a good job when your handler tells you so. At this point, you’ll know you’re weakening the Escaton Judgement move, so keep at it.

As Alatreon reaches the final phase of the battle, make sure you fully heal yourself. If you’ve dealt enough elemental damage, the Escaton Judgement will still damage you but won’t take you out in one hit. If you’re taking damage, eat the Astera Jerky which should offset the damage a little.

If the horns are broken, Alatreon will return to its starting element, otherwise, it will reach its final form of either Fire or Ice. If you’re facing the Fire Active version with a Fire weapon, you’ll be doing no damage at all. If you survive the Escaton Judgement, the cycle will continue until its dead.

If you’re running this quest solo, the threshold for damage will be lower so you might find it a bit easier. If you’re playing with pals, bully them all into taking elemental weapons otherwise you’ll just be wasting each other’s time.

That’s pretty much it. If you want to see a visual guide to defeating this new monster, check out the video from Arekkz below. Happy hunting!

There are two sets of armour to craft once the Alatreon has been defeated, the Alpha and Beta set, with the latter looking like a much more impressive version of Daedric and Dragon armour from Skyrim. One of the key features of Alatreon armour is Alatreon Divinity set bonus, where your equipped weapon’s elemental power increases as your armour’s elemental resistance increases.

If short, you better have a few Resistance Gems to hand for both the two and three-piece set bonus. The two-set bonus us called Element Conversion and the three-set bonus is All Elemental Resistance, which increases elemental resistance by 20%. 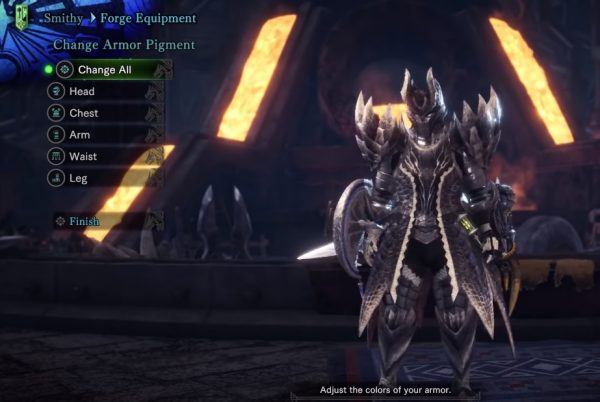 You’ll also get a bunch of other equipment skills like Attack Boost, Critical Eye and Resentment. Both the Alpha and Beta sets come with the Alatreon Divinity perks, but the Beta set skills vary in slots. To craft the armour, you’ll need to gather Alatreon parts like horns, wings and its tail that can be severed during the fight.

The real irony is that having either set of armour equipped when facing Alatreon will make the fight much easier, but you need to defeat it first to be able to get the armour.

There are also a bunch of shiny new Alatreon weapons to craft that come with pretty high damage and Dragon elemental damage and very good Sharpness. Each weapon has an upgraded version in the tree you can also craft:

As you inflict more damage on the Alatreon you’ll get shiny drops which you’ll need for the weapons, so you don’t even need to finish the quest and defeat it to craft them.

For a more in-depth look at the new armour and weapons, check out this video from Arekkz here.