Recently I’ve been thinking about a certain big-budget horror sequel, and the many important differences between it and its predecessor.

The first game saw an everyman and his adopted daughter struggling to make sense of a nightmarish world – one filled with religious cults and his daughter’s innate ability to change the fate of that world. The sequel, released a console generation later, looks similar to the original, but feels very different: it is a game about not what you are – a prize, a thing, a saviour – but who you are: what you’ve done, why you’ve done it, and ultimately, whether you’re prepared to do it again. That game is Silent Hill 2, and The Last of Us Part 2 is – in parts – just like it. This is a very good thing.

Droll openers aside, it is striking how both games deal with how grief manifests itself in the world around the characters; as grotesque violence against not just their physical wellbeing but – much more importantly – their mental health too. The leads in the respective games can’t just get over ‘it’, because ‘it’ isn’t a pandemic (broadly well-contained in Part 2) or a religious cult (nowhere near as prominent in SH2), because ‘it’ is you, and the power structures around you. The only one way out is to confront a grim reality: not just knowing the truth, but knowing what you’ll do when you find what you were looking for.

It’s a world where the questions are painful and the answers even worse. Like in The Last of Us Part 2, there is no overarching global ‘mission’ in the strategic sense. In Silent Hill 2: no saving the world, no glory, no upside. As James Sunderland, you’re going in circles in a world filled with your own inner turmoil over your wife’s death, looking for solace, or closure. Mostly, it never comes. Ellie, too, is utterly lost, carrying a gnawing suspicion which becomes a reality, trapping her forever just as surely as James’s inability to reckon with his own self dooms him to eternal suffering, and low draw distances. 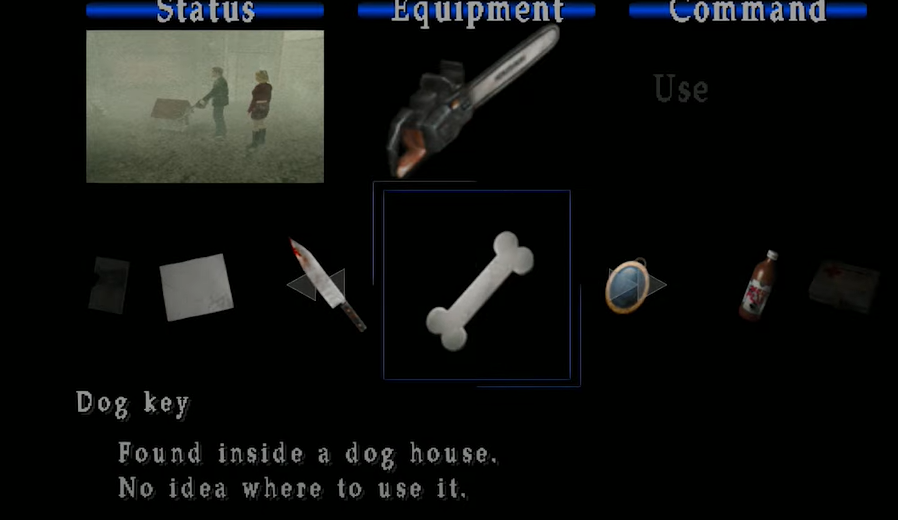 There’s a pivotal moment where Ellie’s nemesis Abby, herself caught in a spiral of vengeance, screams almost disbelievingly at her foe, having realised that sparing her Joel’s fate has allowed Ellie the chance to kill Abby’s closest friends. ‘We let you live, and you wasted it!’ An odd choice of words, until you remember that like many victims of violence, of depression, of PTSD, simply living is the hardest thing to do. 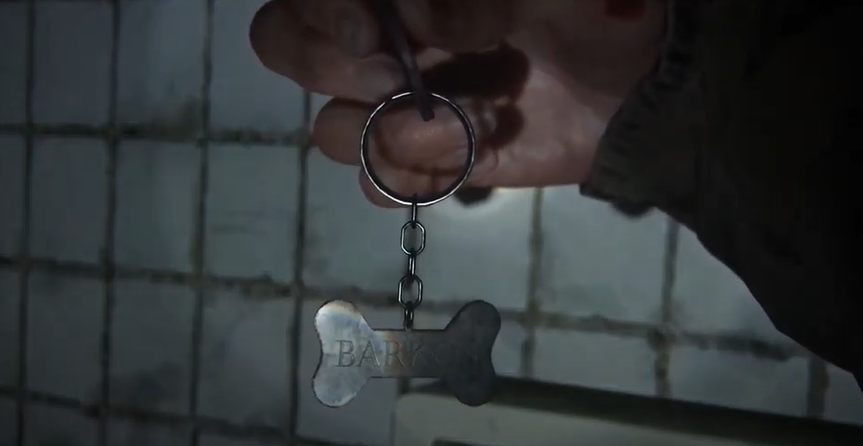 Which is quite a big thing to say about the triple-A zombie game where you craft awesome gun parts out of bits of tin you found in a bedroom while collecting baseball cards. But while The Last of Us’s loudest moments are when you’re suddenly playing Aliens: The Video Game or assaulting a hotel, a lot of its lasting moments are quiet. 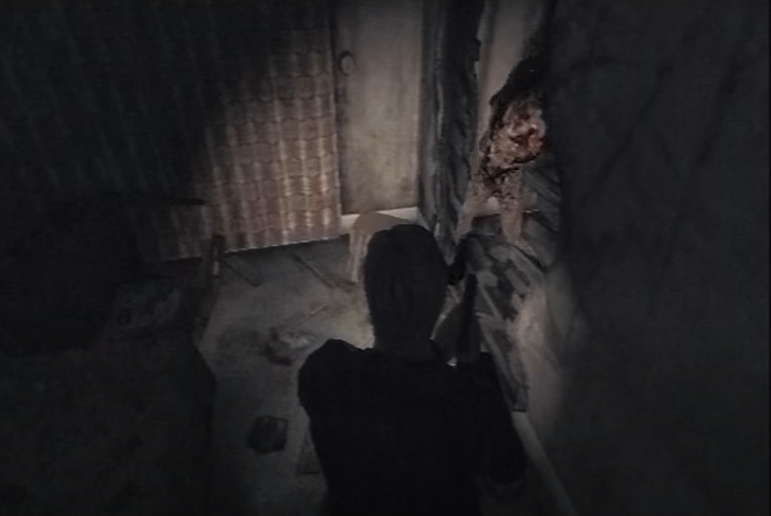 Both feature a strangely beautiful world, whose dominant motifs are vastly exaggerated natural occurrences which come to strangle the mundane everyday: fog in Silent Hill, reclaimed nature in The Last of Us. That natural wonder is rendered against the grottiness of what went before: crumbling brickwork, rotting buildings, dilapidated homes which you can just tell smell like wet towels left in the drier too long. That or entrails. Maybe both. 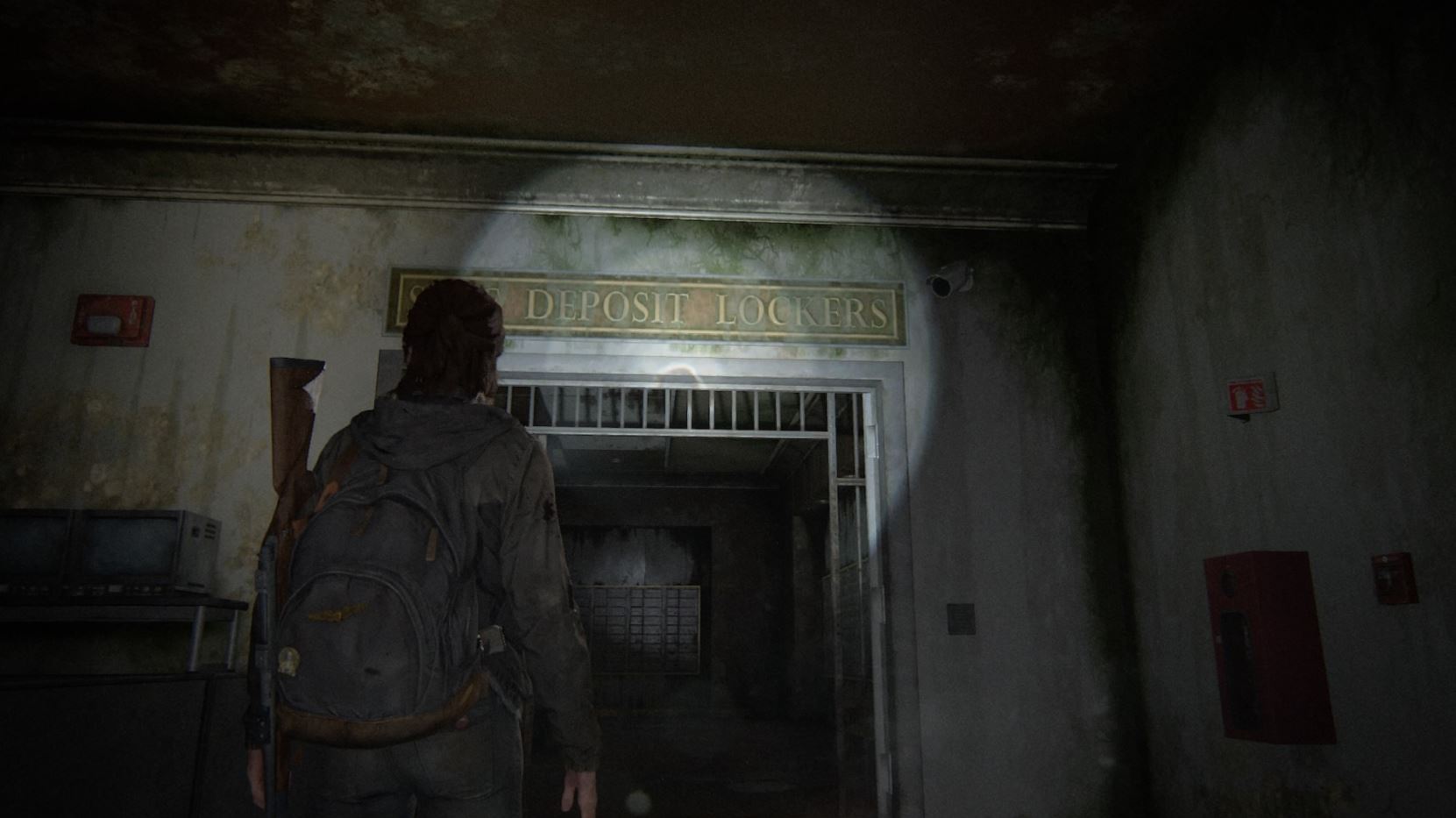 Never do the games appear more alike than in a section set in Seattle, as Dina and Ellie search for gas to open a locked security gate. Their mission takes them into downtown – coffee shops and courthouses, synagogues and pet stores. You even have a very similar map in both titles, used routinely to make your way around and work out which lost slice of life you’re going to have to explore to unlock the next part of the maze.

The area feels curiously safe, like you can’t really be hurt in any meaningful way by the occasional enemies you bump into. Instead, the damage is done psychologically. While James’s world is obviously metaphysical – Silent Hill being not a real place but more like the cave, i.e everything in there is brought in by you – just because Ellie and Dina’s world is obviously ‘real’ doesn’t mean they too don’t fill it with their own burdens. Much of this is expressed as incidental dialogue which belies their shattered lives. 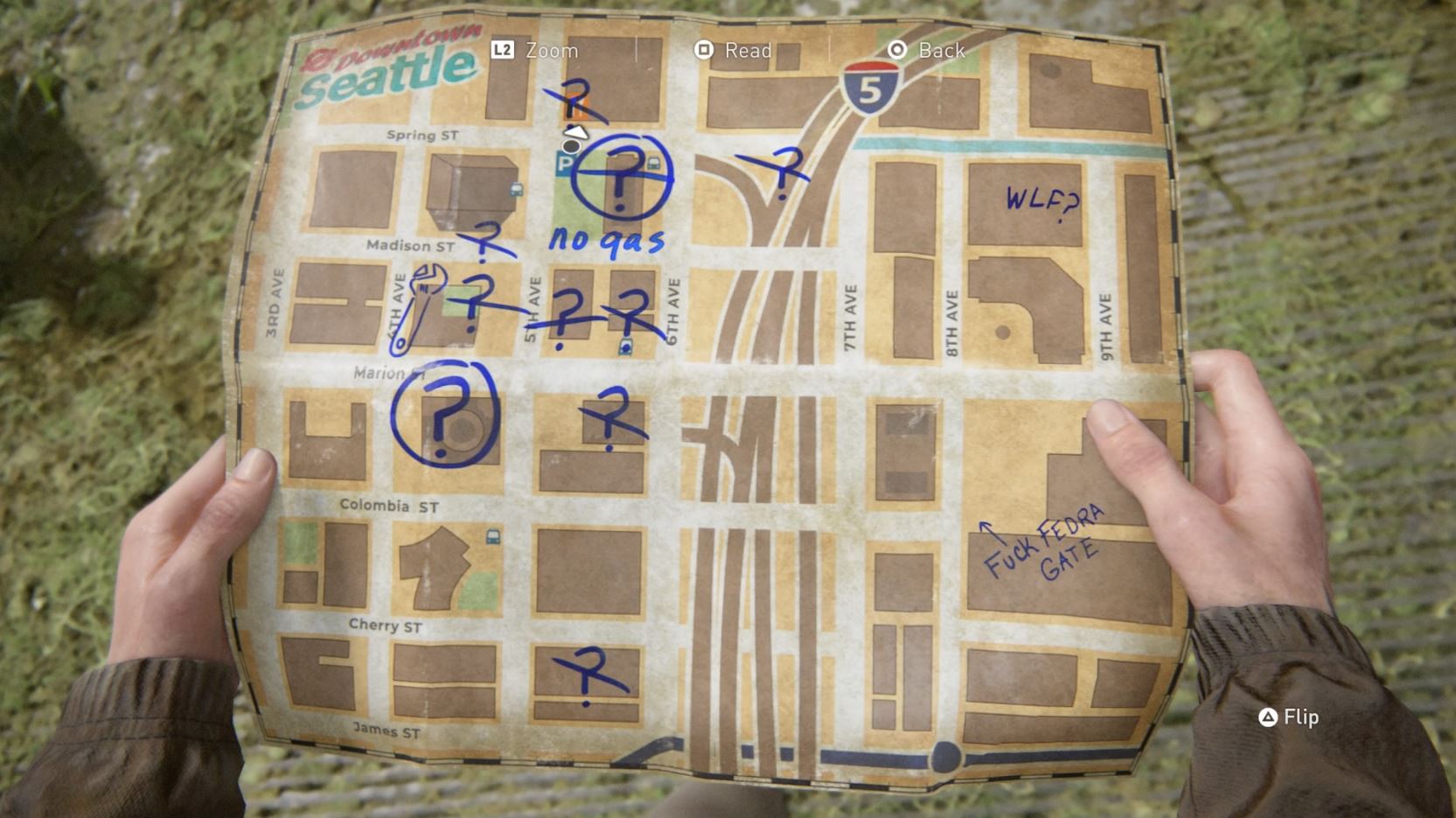 One powerful example of this happens inside a synagogue, where Ellie’s general lack of understanding of the world is exposed as Dina openly shares stories. Then there’s the pet store, where Dina sighs about how much she misses the pets she used to have, even if they were mad strays. Importantly, there’s the lamentation of a lost future in a music shop, where the women muse about forming a band. Music is the throughline to a lot of The Last of Us Part 2’s big emotional moments (Ellie and Joel are nearly killed getting guitar strings, for one), but also its tender mercies. There’s also a certain delicious irony to the superb playable guitar, because what at first seems like a fun extra brings both player and character together as one: what else are you doing, if not filling an empty world with your own past by performing to nobody but yourself? 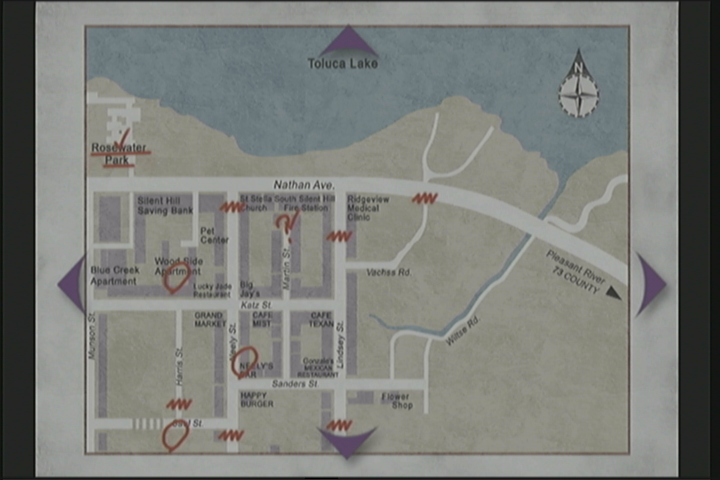 Where the games diverge is in how Silent Hill 2’s human characters are concerned (or not) with escaping their past, many of the players in The Last of Us Part 2 are just trying to get others to let them embrace their own future. Silent Hill 2’s cast is primarily made up of people who are punished for what they have done or are suffering from things that have been done to them (both, mainly), whereas in many instances The Last of Us Part 2’s cast are also being assaulted simply for who they are.

Lev is hunted by his own people for being trans, while Ellie and Dina deal with blatant public homophobia, told that this is ‘a family event’ as they embrace at a dance, showing that while some things change – the global order, the concept of day-to-day living itself – other attitudes die hard. (They do receive an apology of sorts, but this is demanded by the head of the community and seemingly not proffered by any change of heart.) To this end, they find themselves fighting a cyclical battle: when the old world fell, the people in charge rebuilt it on the same foundations, ones where the concept of happiness for others is defined by how unhappy it makes you personally.

Ascribing intent is always tricky, and it would be very foolish to say that Naughty Dog saw Silent Hill 2 and went, ‘Yes! Make it like that’. Regardless, both games deal with some themes you simply don’t see in big-budget video games and – mechanical similarities in Seattle aside – both deal in misery, given and received. Ellie, like James, is both a victim and instigator, a sort-of Robert Neville realising that what she believes herself to be and what she is to others simply does not mesh. She cannot conjure Pyramid Head or deformed nurses, but the monsters she and the rest of the crew do unleash upon themselves with their actions are much, much worse, just as James’s ‘bad ending’ showed that by refusing the admit what he had done (murdered his dying wife) he was doomed to repeat that cycle forever.

The crucial difference is this: at least Silent Hill 2 had a ‘good’ ending. No such luck for Ellie. To borrow liberally from the movie Jacob’s Ladder (which Silent Hill was inspired by): the most terrifying thing about Ellie’s nightmares is that she isn’t dreaming. Fun, eh.