With next-gen just around the corner, people are getting excited about the possibilities for custom consoles – so much so that one artist designed what a Cyberpunk 2077 PS5 could look like.


The artist in question goes by the name Xbox Pope, and their custom Cyberpunk 2077 PS5 design was recently shared over on Reddit. You can check out a photo of the console below, which is the most impressive version of a Cyberpunk 2077 PS5 I’ve seen to date. I’m glad it’s not real because then I would probably end up accidentally spending lots of money on it. 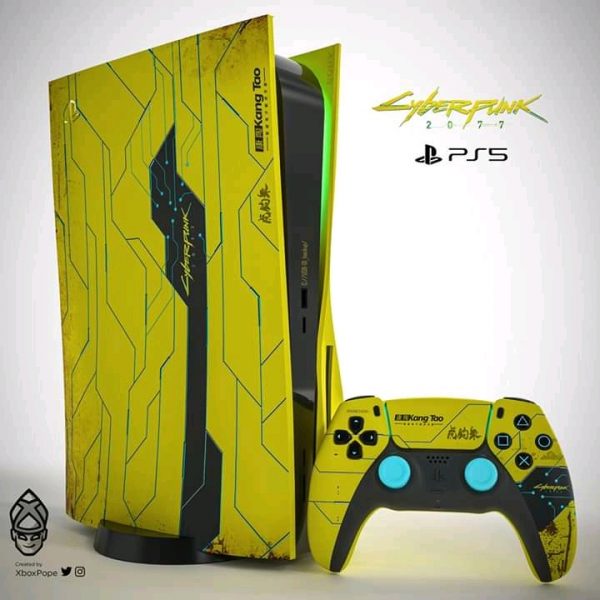 As you can see, it’s got the iconic yellow and black Cyberpunk colour scheme, with baby blue analogs that are actually quite well-aligned with the rest of the palette (I wouldn’t have thought to pair that shade with yellow myself, but hey, I’m not an artist, and I would have been wrong not to).

This isn’t the first custom PS5 imagining to appear on the internet. BossLogic, who is well-known for his mock-up designs, shared his take on a Miles Morales PS5 after Spider Man: Miles Morales was announced during the PS5 event two weeks ago.

In related news, Cyberpunk 2077 will receive a more “robust” upgrade for both the PS5 and Xbox Series X when it launches on next-gen consoles. Although no official Cyberpunk 2077 PS5 custom design has been unveiled yet, the Xbox One X custom version shipped earlier this month. Interestingly, it had a hidden message engraved in it that could only be revealed with UV light.

If you’re hungry for more Cyberpunk 2077 details, check out our hands-on impressions from our four-hour demo earlier this week.

In related news, fans recently spotted that the recently revealed Judy Alvarez has a pretty cool Radiohead tattoo in Cyberpunk 2077. Perhaps most importantly of all, it was confirmed that you can, in fact, pet the cat in Cyberpunk 2077.