They call my Joey the Bird.

If this were a Scorcese picture, the pseudonym would be a nod to the years I’d spent behind bars. If it were a Guy Richie film, it’d be an indecipherable line of Cockney slang. But in this FiveM Grand Theft Auto 5 roleplay server that boasts external mod support, it’s because I’ve been transformed into a ‘lookout seagull’ for the mob, who communicates with its street-level comrades via the medium of bird shit. That’s right, warm, streaky liquid excrement. Capeesh? Na, me neither.

Still, here I am, waddling around next to the body of a deceased mark with the cops hot on my literal tail. I flap my wings, take to the skies and flee the scene. It isn’t long before the LSPD’s mechanical birds catch up with me, gun-turrets and all, and it looks like my chickens have come home to roost.

Wait a second, let’s back up a little. Let me first explain how I wound up in this mess. 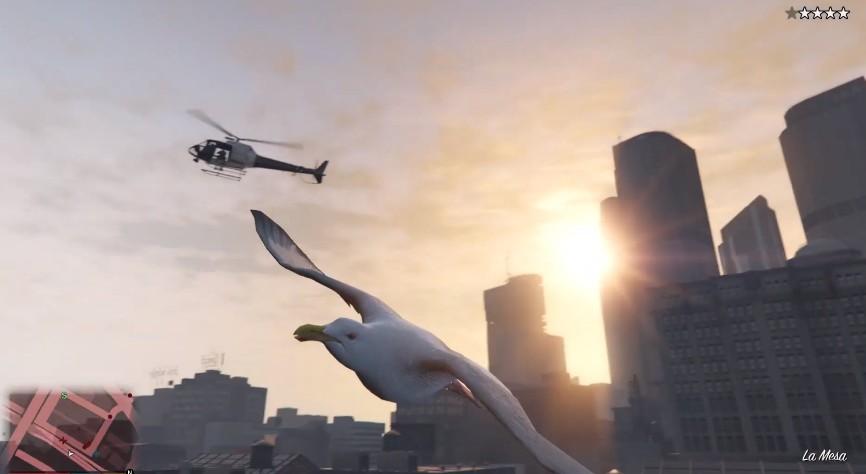 FiveM, for those unaware, is an open source community modification for GTA 5. Mod use in regular GTA Online is a big no-no (you’ll get perma-banned if you get caught doing so), and so FiveM works independently of Rockstar’s base game, besides validating the player’s copy prior to launch. Not every server in FiveM is a roleplay server, but I’ve had the most fun exploring its roleplay scene, creating serious experiences and much, much less serious experiences in my wake.

My latest endeavour lands squarely in the latter camp. Now, if you’re in any way familiar with organised crime – via books or documentaries, or even if you’re into gangster films or TV shows – you’ll probably have a loose understanding of the hierarchy of La Cosa Nostra. To be fair, whether you do or don’t is irrelevant here, because even if you don’t know your Underbosses from your Capos and Soldiers, you’ve probably, quite rightly, assumed Wizards and Seagulls aren’t part of the organised crime employment pecking order.

Nevertheless, less than ten minutes after landing in this FiveM server I found myself stood before a man roleplaying as a self-proclaimed “mafia wizard”, who was stood next to a different man roleplaying as a boss, both of who took turns at explained why me being transformed into a lookout seagull for the mob was a really good idea.

In both men’s defence, this diatribe was a way of framing my imminent transformation from humanoid-to-bird in order to keep things level in roleplay terms. Not subtle, but not totally absurd, I reasoned.

Anyway, man number one started barking some made-up Latin at me and, voila, a mafia lookout seagull I was made. I was advised that I’d perform aerial watches for my assigned gang of ruffians and, so as to maintain “believability” in the process, I would sacrifice my ability to speak. How would I communicate with my ground-level counterparts, then, as I warned them of encroaching rival gangs and the presence of the 5-0? With the aforementioned flush of off-white jobby. Lovely.

“Go to the railway-road intersection in east Sandy-Shores, just down the way from Trevor Phillips’ trailer,” said my new boss. “Distract the driver of the afternoon train route. We’re planning a robbery. A couple of Chamberlain Hills Ballas will take over once you’ve slowed the train down.”

I arrived at the assigned junction, and had a wee look around. I spotted the locomotive making its way towards me, and took off, gunning for the driver’s cab. If I could time a swoop right in front of his window, that would be enough to slow him down, I thought to myself. And then I wound up splattered across his windshield, because, really, how else was this set-piece going to unfold? One-hundred tonne vehicle: one; small feathered Laridae seabird: zero.

After a quick visit to the vet, I later met up with the affiliated Balla gang members back at their Vanilla Unicorn hangout to explain myself, but they mostly ignored me. Deflated, I couldn’t tell if this was because I’d cocked up the mission, or because I’d taken a poo on the floor. Either way, both felt like solid reasons. I left with my tail between my legs.

Unlike most other roleplay servers I’ve played in, this server’s police presence is composed of both real-world players and NPCs. You’re assigned a crew – in this case, the mafia – and if they fall foul of the law, the cops pursue the crew in its entirety, no matter the individual’s involvement.

On job number two, I put the ferocity of the LSPD’s NPC contingent and their attention to group accountability to the test. After my colleagues Gav and Toni Zamborini held up a bank, I emptied my bowels on the pavement, my peers shot off in their getaway car, and, when they arrived at the scene, the boys in blue sought to pick me off from the skies. They failed, and I swear I came so close to dropping a deuce on one copper’s head. Success! I was over the moon and was finally getting the hang of my totally-not-made-up role in the Omerta.

I couldn’t help but laugh at their cries from the concrete below.

Job three was a total shambles. Buoyed by my previous triumph, I’d become overconfident. I barely listened to the briefing. I know my role – keep an eye, mark the target, let the boys take their shot, distract the cops and flee the scene. Standard. They call me Joey the Bird, didn’t you hear? I’m kind of a big deal around here.

And so as I circle the looming skyscrapers of downtown Los Santos, I search for our target. A murder. This is the real thing. What was it the gaffer had said, though? Something about taking out a cleaner, was it? I wish I’d paid more attention. Aha! A woman in overalls. Okay, here goes. One plop next to the hit. Toni sees it. Bang! He’s taken her out. She’s down. He scatters.

Except it wasn’t a cleaner we were after. It was a rogue doctor. Take him to the cleaners, the boss had said. A case of mistaken identity, poor soul. And now a four-star wanted level and very little time to make an escape. There is a slight chance I was given too much responsibility on this one, I fear.

I am literally shitting myself.

Goodbye Joey the Bird, aka Walter Shite, aka Beaky Blinders. We hardly knew thee. Now where the heck is that wizard?