In the latest of our columns on accessibility in games, Courtney Craven plays new releases and remasters from May.

May was the month of remasters and not a whole lot else. From 1940s gangs in Mafia 2 to adventuring around the titans in Xenoblade Chronicles, it seems everything is being remastered. Everything except accessibility. The theme of this month’s accessibility report is, if you couldn’t play the original, you probably can’t play the remasters.

But before we look at the remasters, let’s take a look at a curious new release. Maneater is a game I’m finding so oddly satisfying for mindless RPG fun that I almost don’t care how much it’s inaccessible controls are hurting my poor arthritic hands. 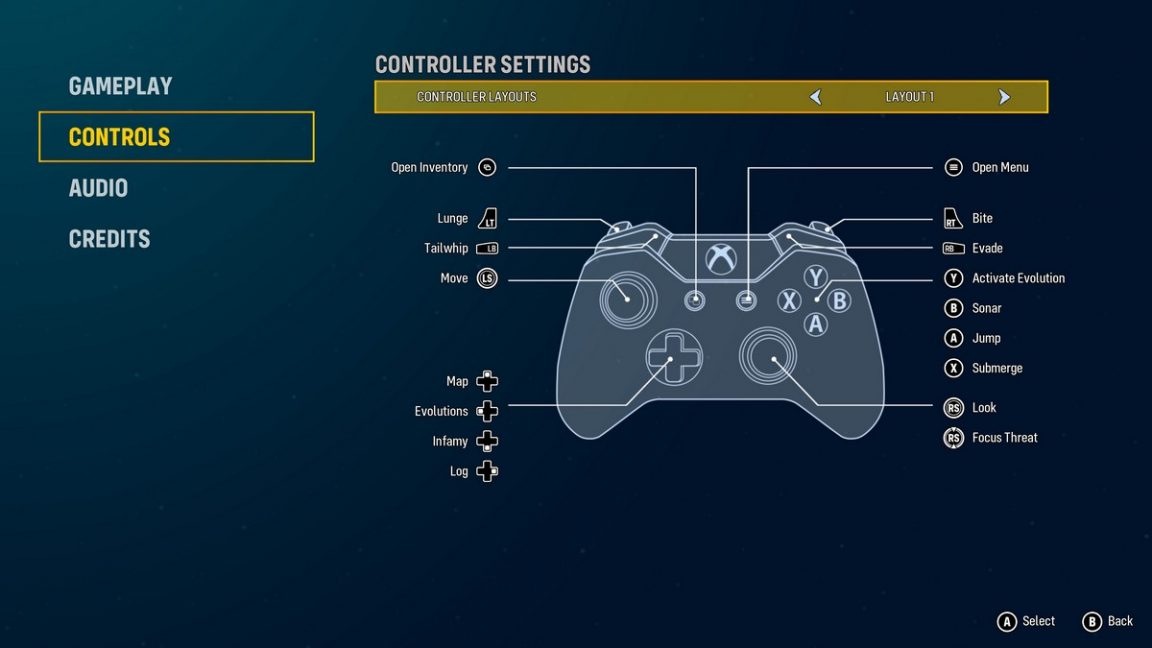 In Maneater, while there are three different controller layouts, all of them oddly map most things to the same buttons. Attacking, for instance, doesn’t change no matter which control scheme you choose. It’s RT and too bad for you if that’s not a button you can use, I guess. 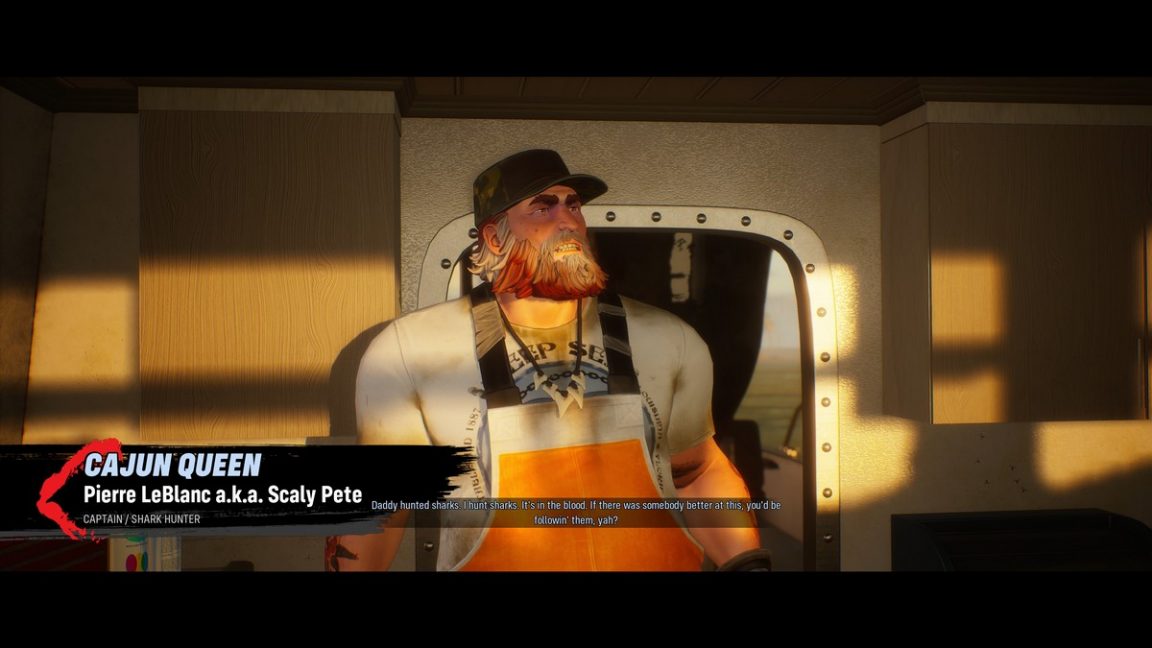 Too bad for you if you want to read the subtitles too. Those in the cinematics are almost microscopic and the subtitles for the in-game narrator are only marginally better. 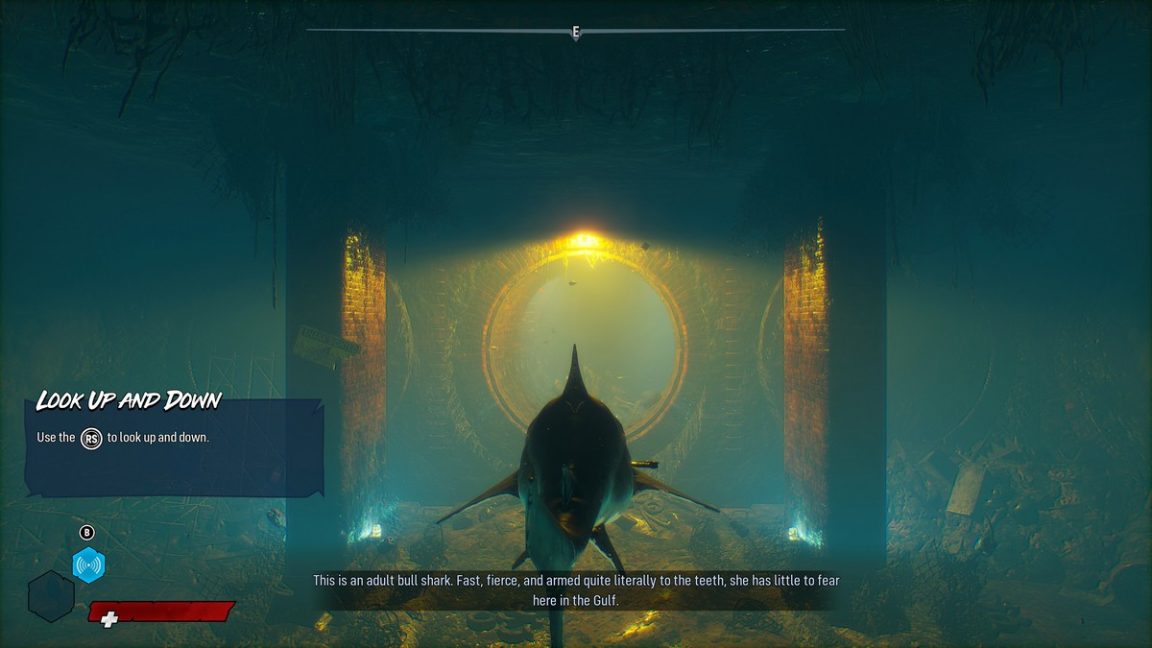 Maneater isn’t a complete accessibility disaster. Its auto-targeting of your nearest enemies and prey is amazingly helpful in a game that requires a lot of movement and button mashing. Enemies are also color coded with an outline (blue for prey, red for enemies that bite back) and the UI in general is very well-designed and helpful. 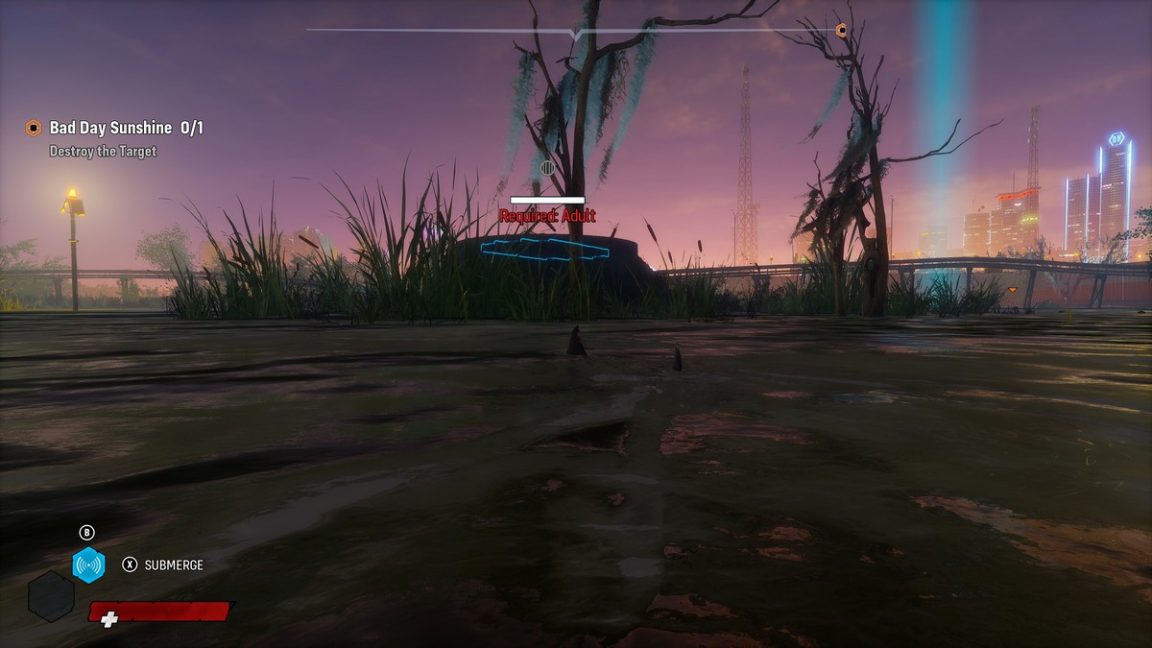 Aside from the tiny subtitles which seem to plague most games, the only major downside to Maneater is all the button mashing you’ll do, leaving those of us with mobility or joint issues at a disadvantage.

Up next is the surprise release of the Mafia 2 Remaster. I can’t recall a game that’s left me thinking, “Who the hell thought this was a good design choice?” more than Mafia 2. 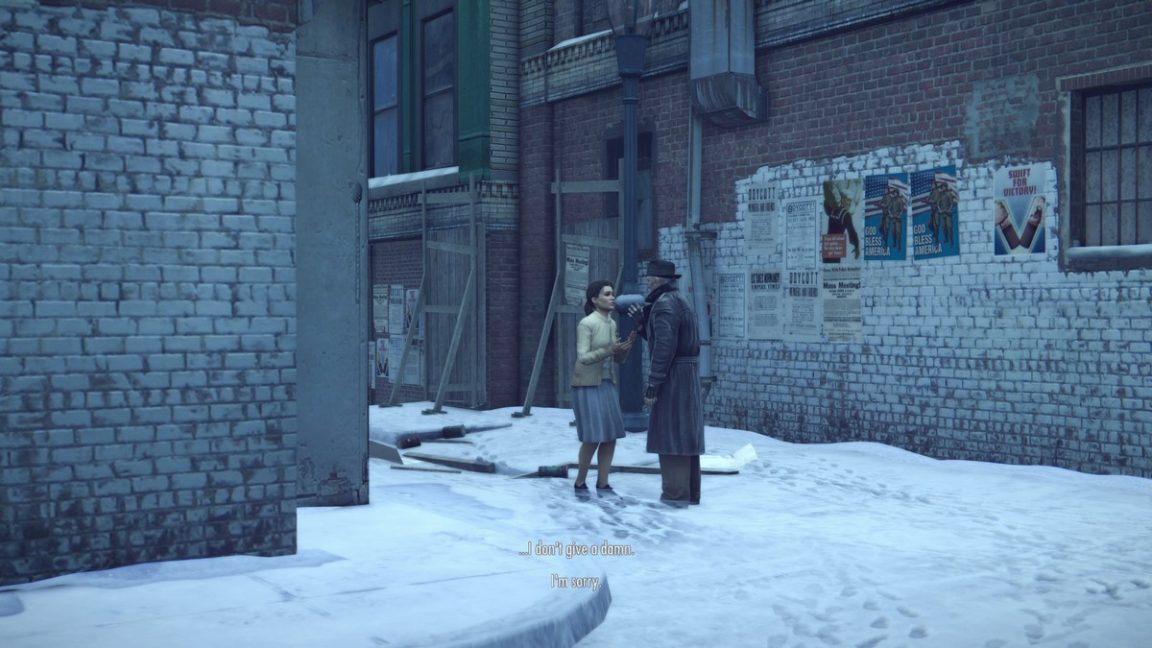 Here are the subtitles. White text in a snowy game. Sure. 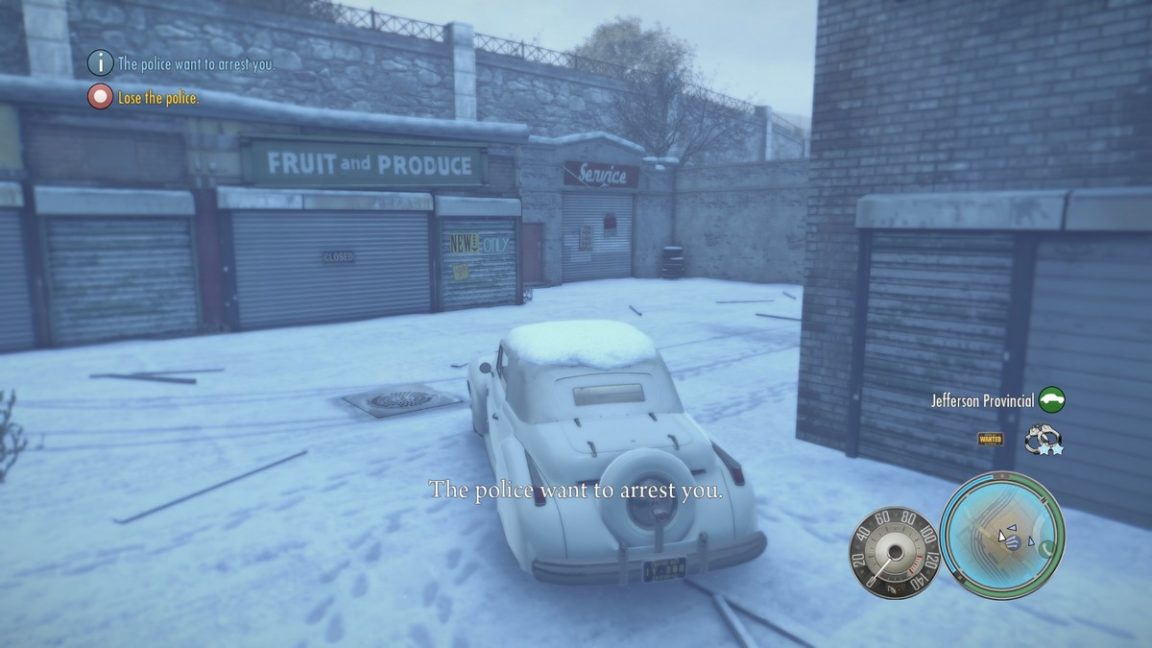 White notification text in a snowy game. Sure. 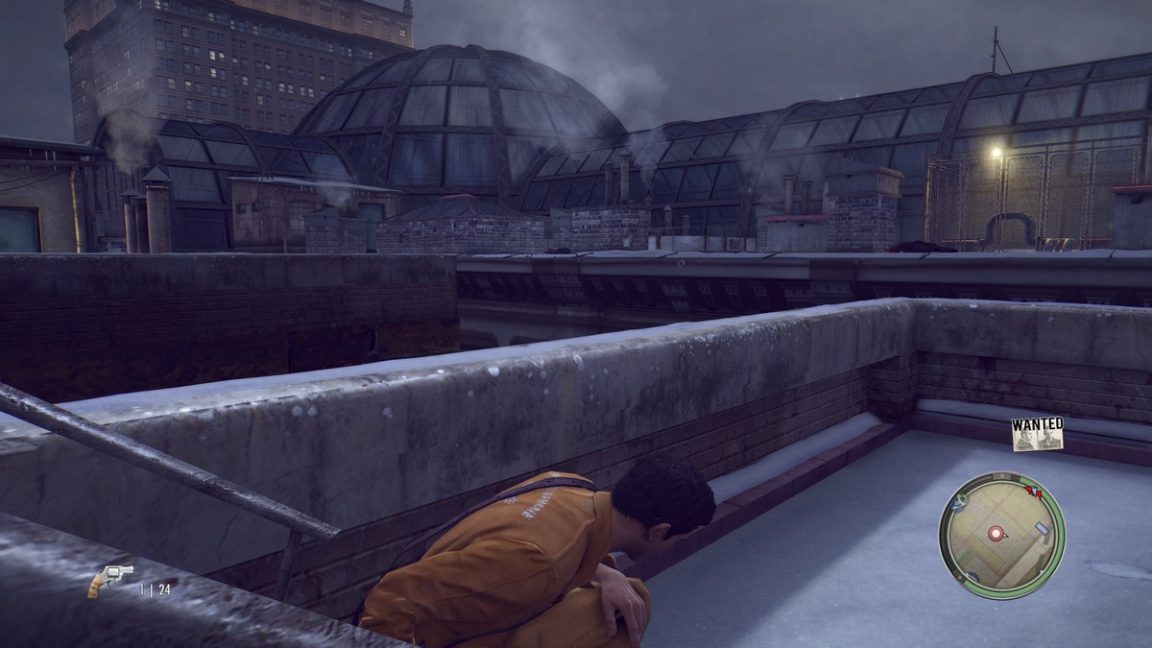 There are minimap icons to tell you the general location of enemies but in my time with the game, they seemed accurate half the time at best and the minimap makes them appear deceivingly far away when, in fact, they’re right there to shoot you. Pair that with the lack of aim assistance and I died many, many times.

I won’t say I’m surprised by the lack of remappable controls. This isn’t even a standard practice in games released in 2020, so I certainly didn’t expect remapping to be present in a remaster of a 2010 game. There are two control scheme choices for both driving and walking and while they don’t change much about the major controls, it’s helpful to have at least a little customisation. 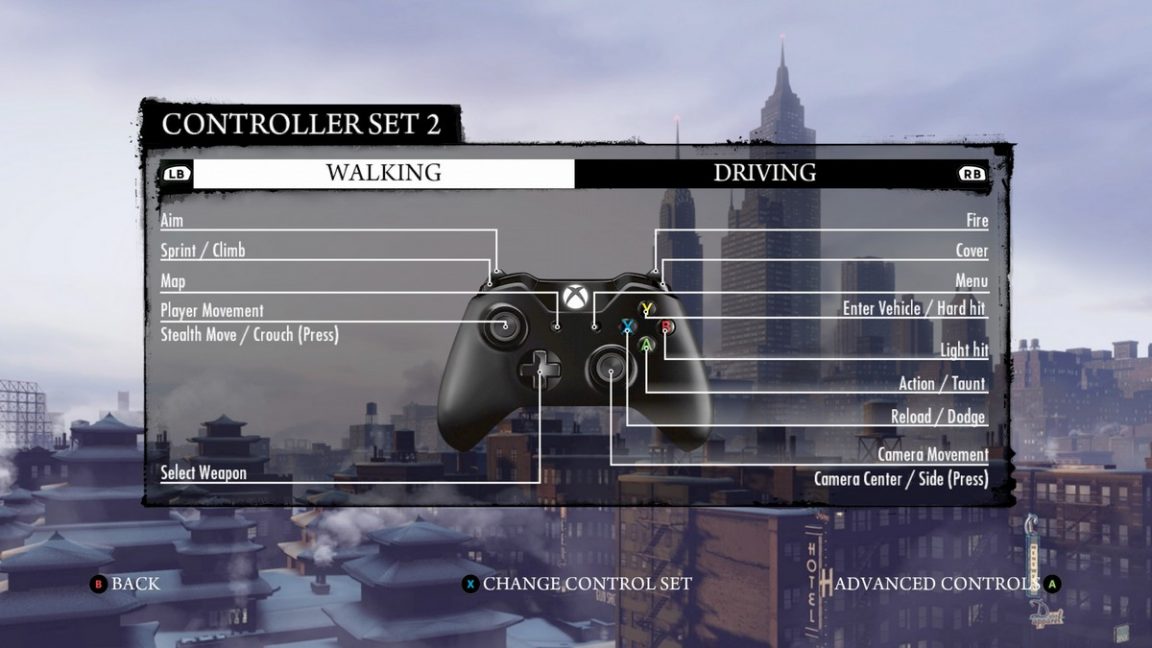 It’s unsurprising that the world feels a little bit empty as a hard of hearing player, as none of the chatter of the game world’s inhabitants is subtitled, nor is the ambient noise of the city captioned.

I hope that eventually accessibility improvements will be prioritised in remasters, as Mafia 2 is an incredible game with a great story that will fall flat for deaf and hard of hearing players, or be wholly inaccessible to many other disabled players.

The next remaster of May is Saints Row: The Third which did a surprisingly better job with accessibility across the board than Mafia 2.

The subtitles, while lacking speaker identification, are actually legible, though a bit small. Contrast didn’t prove to be an issue in legibility very often throughout the day and night cycles of the game. Unfortunately, like Mafia 2, the random chatter and noises of the city in Saints Row remains un-captioned, making a full and lively world still feel a little empty for deaf and hard of hearing players.

Cheats and easy modes are a polarising issue in gaming, even within the a11y gaming community. But for me, cheats like ‘never die’ and ‘infinite clip’ are a boon for accessibility, as they allow me to enjoy the ridiculous story and still play the game, but in a way that suits me on days when I’m having issues with brain fog or joint pain. These both also help with the fact that there’s no aim assistance. 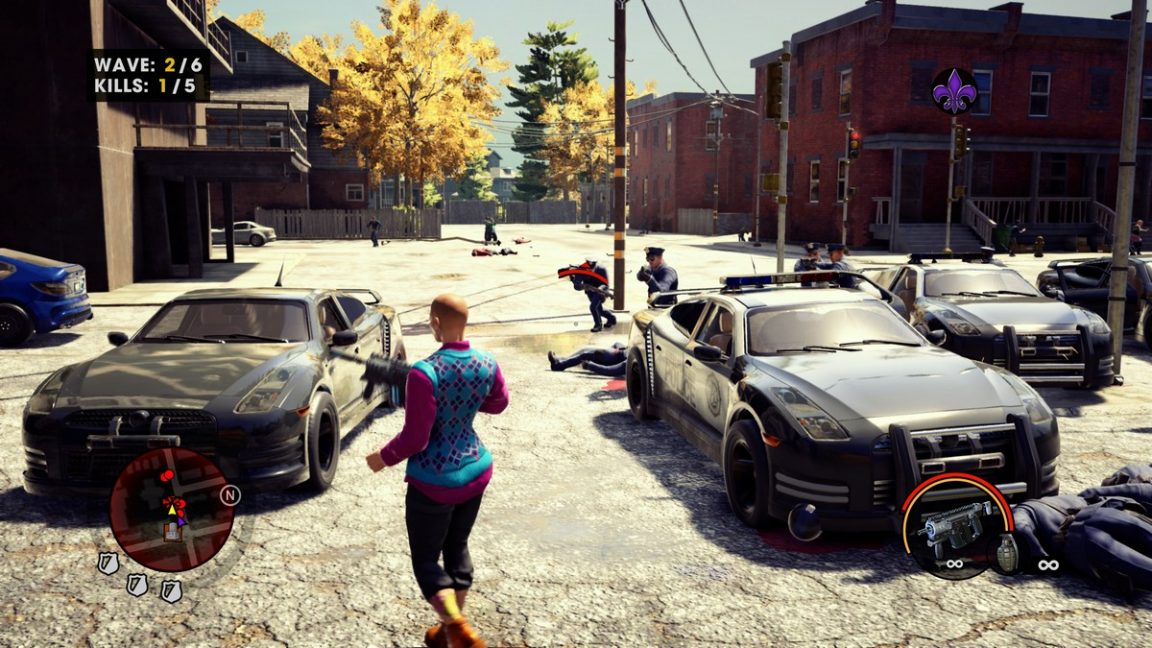 Saints Row takes the enemy location a step further than Mafia 2 and includes directionality of gunfire on-screen, as well as showing you exactly where enemies are on the minimap. The cartoony style of Saints Row also lends itself to accessibility by providing a UI and minimap detail in higher contrast than games going for photorealism. 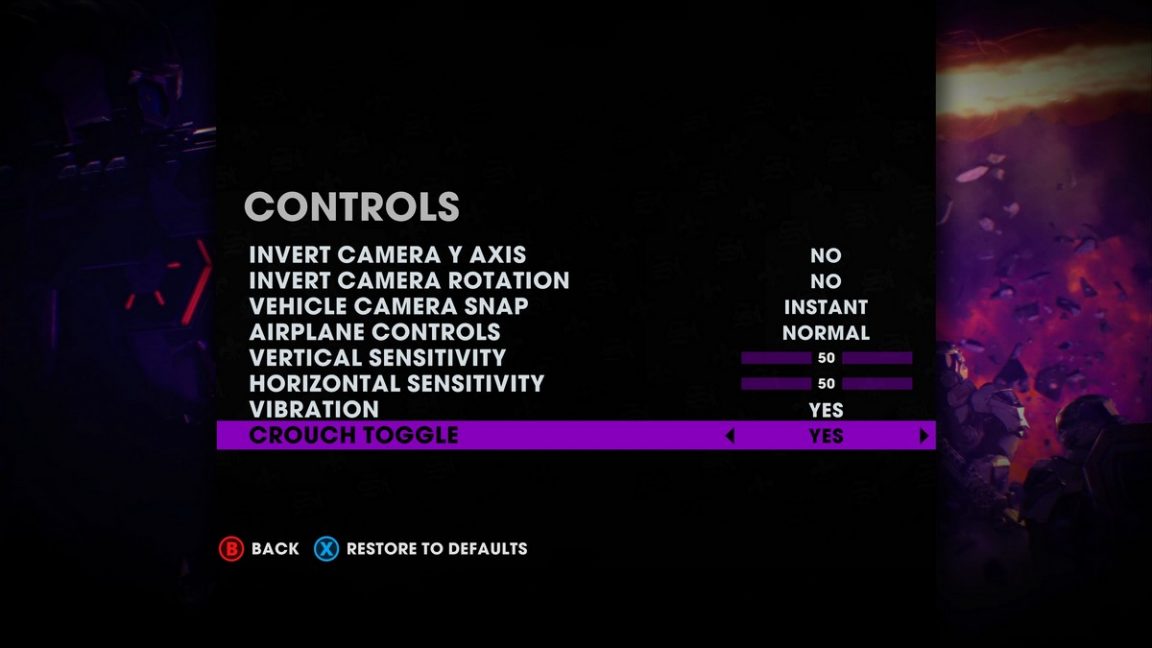 I was surprised to see a crouch toggle, a welcome accessibility addition to any game, in the controls section. But unfortunately it is the one and only toggle option, leaving the weapon wheel hold-only, which will be a barrier for many. 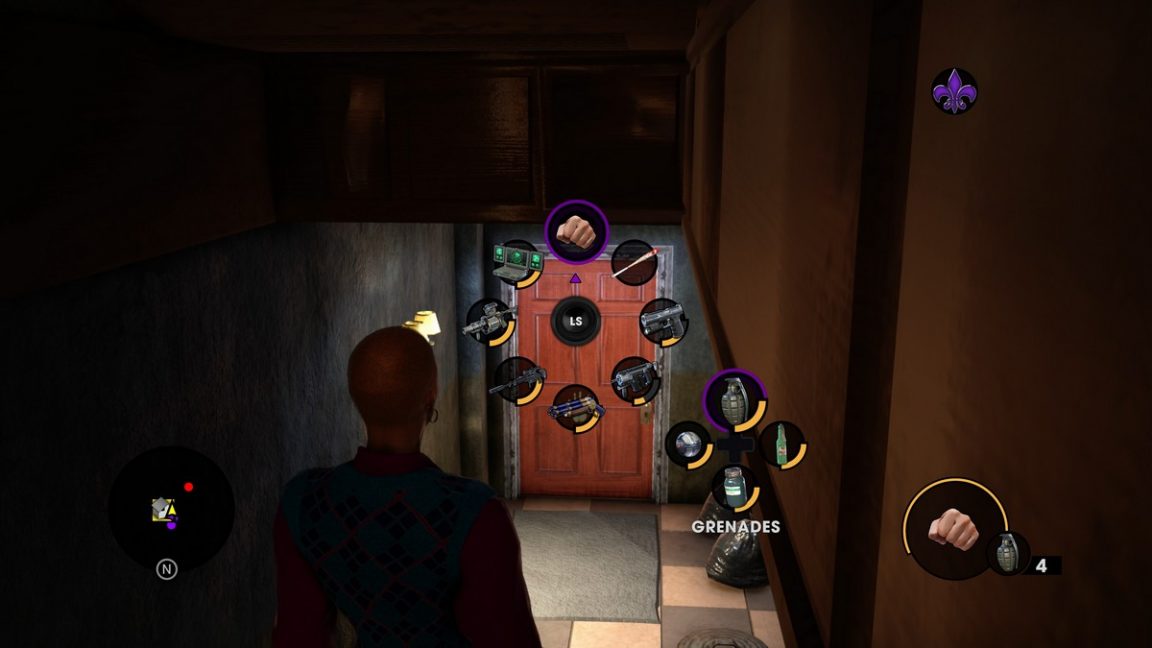 Minecraft Dungeons has done a remarkably good job with accessibility. One might assume this is a given, considering its dedicated accessibility menu, but some games have one and still manage to be widely inaccessible. Mojang did too, kind of, but I’ll touch on that in a moment.

Minecraft Dungeon features full controller remapping! And they even go as far as to tell you what items are required to be mapped to something and when you have a conflict. Games lacking that handy feature are largely the reason I rarely remap my controls. I want to assign buttons, not do a logic puzzle.

Another lovely feature is the ability to scale the already chunky and high contrast UI up to 150 percent, as shown below: 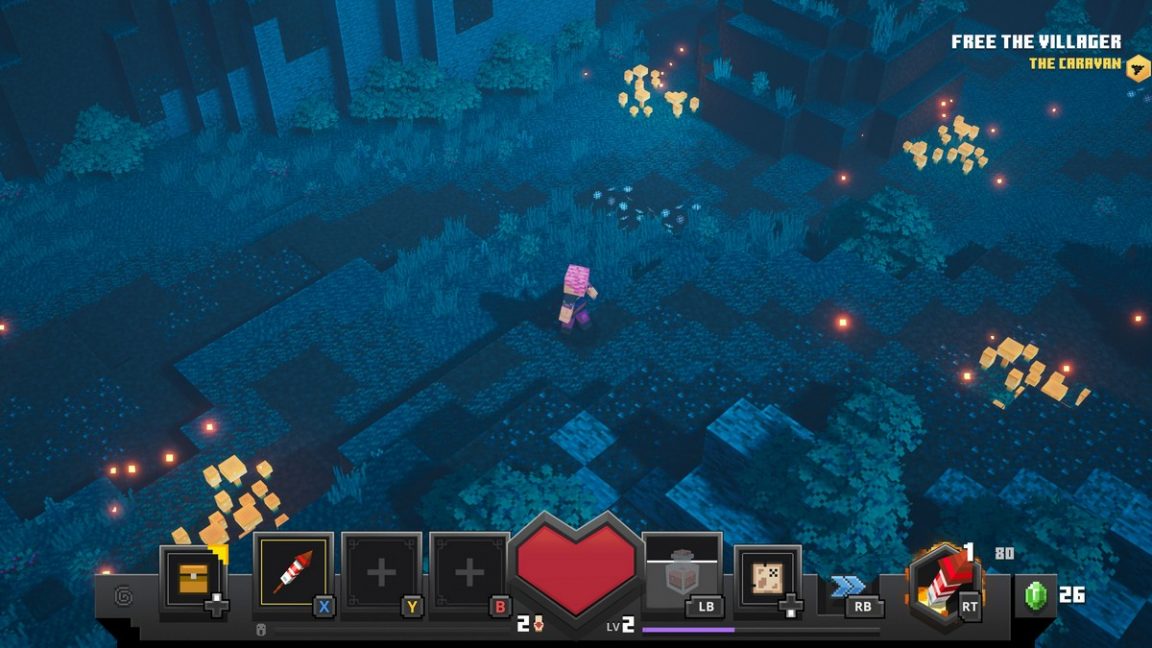 Subtitles in Minecraft Dungeons are fairly good sized and they come with a background, but they lack the ability to scale them, which will be a barrier to many low-vision players. 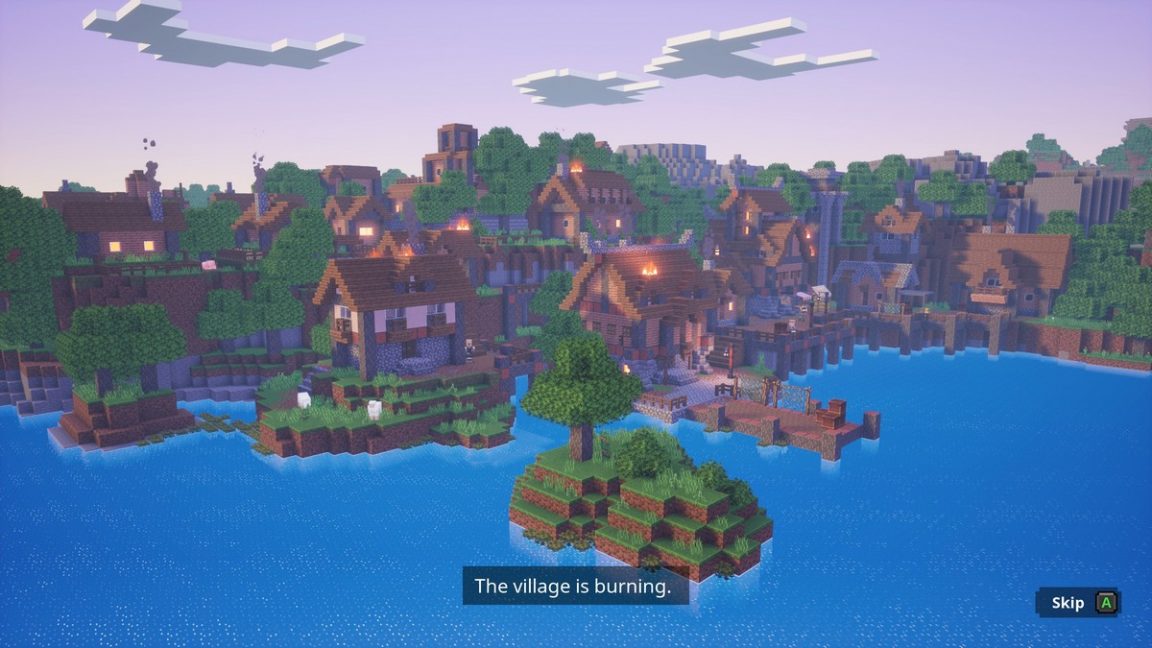 Also incredibly helpful is the ability to toggle on text to speech, making the game a bit friendlier to players without sight, and players can also choose the outline color for enemies. 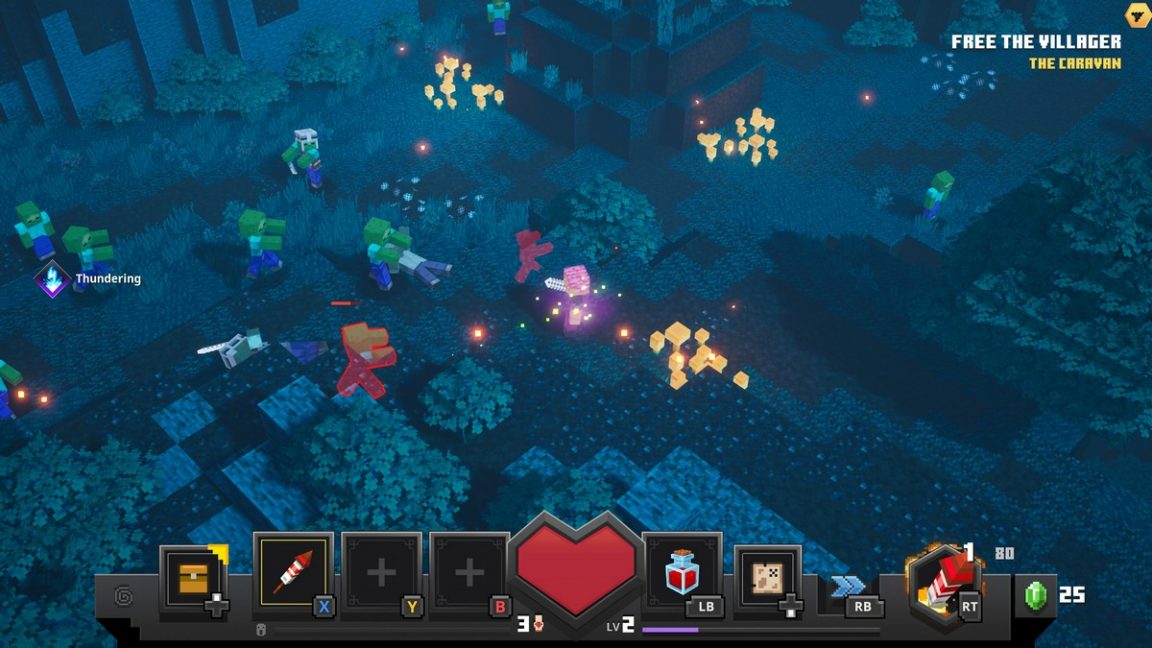 Red is the default enemy outline color and they’re handily given the same color overlay when they’re obstructed from the players view. No surprise attacks here.

The game seems like accessibility gold, right? And it is, except… 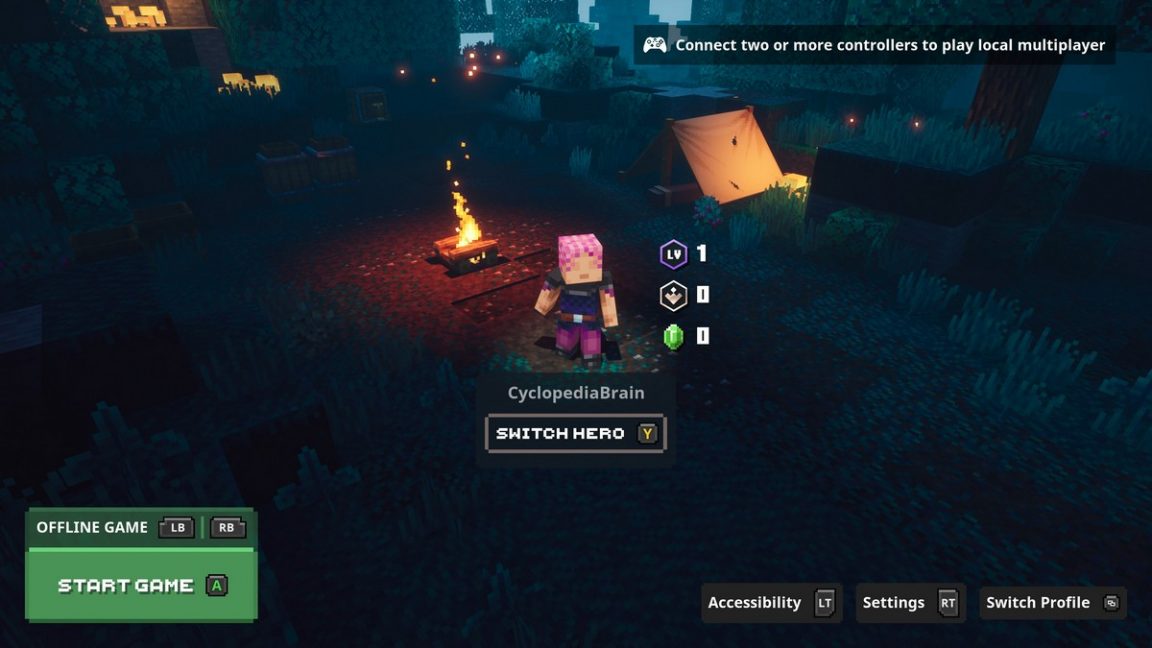 Super Mega Baseball 3 also came out this month and it went right into the bin after playing it for this column. It’s rare that a game manages to be that inaccessible to me but this one pulled it off, which is an impressive feat considering that a lot of the game sort of plays itself. 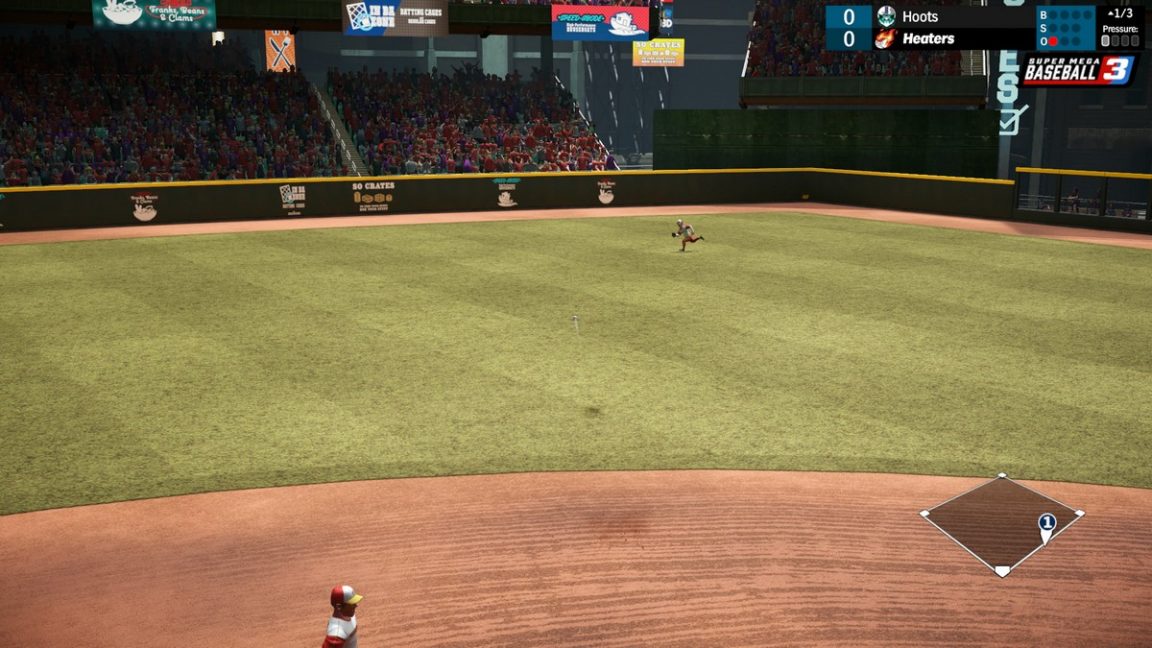 During the players turn at bat, running to a base is automatic. You can control it, tell players to steal a base and whatnot, but you don’t have to. Fielding is similar. You can guide your outfielders, but you don’t really have to. Throwing to bases logically assigns home, first, second, and third to the corresponding diamond of buttons on the controller.

So what’s the problem? 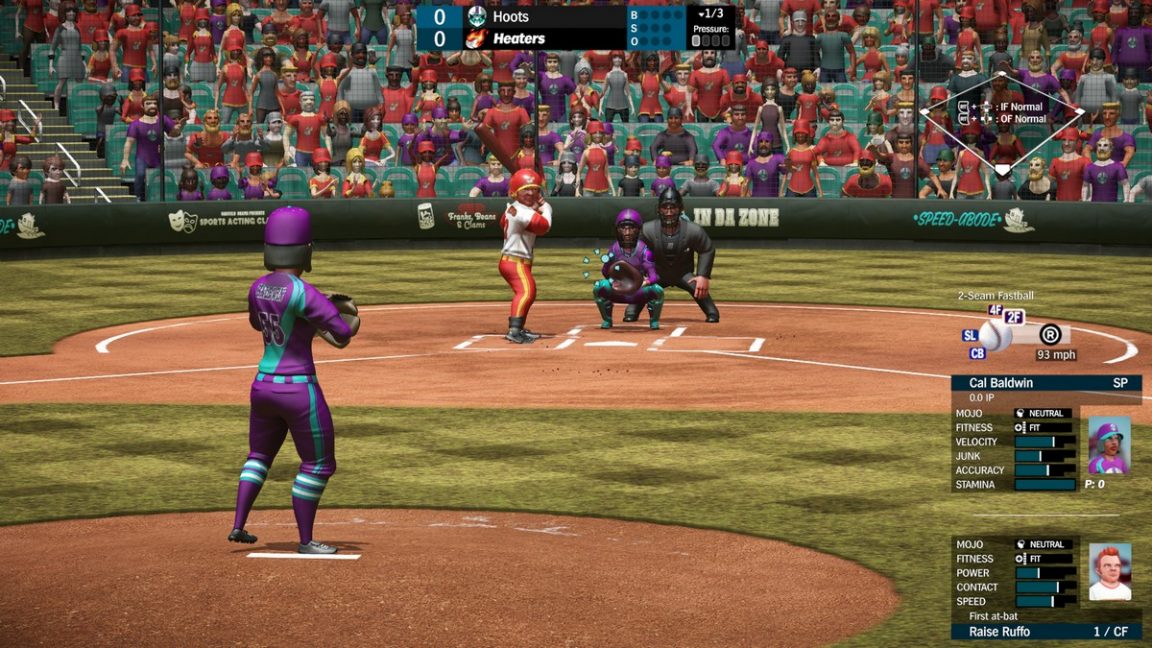 Pitching is essentially a QTE and if you’re like me with slow reaction times, good luck to you. I’ve played three games in Super Mega Baseball 3 and successfully pitched maybe five times. Considering that half of the game is pitching, players who can’t do QTEs won’t really have a whole lot of fun playing. 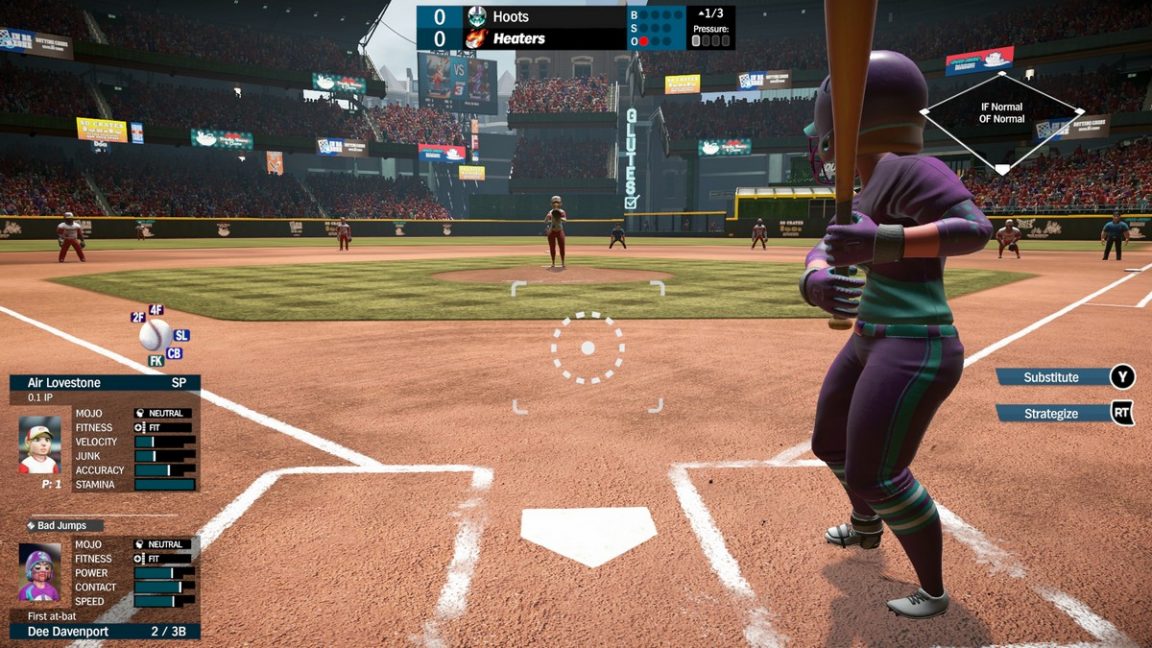 Batting is significantly easier than pitching because while it does take some precision to hit well, it actually allows you time to line up your swing. 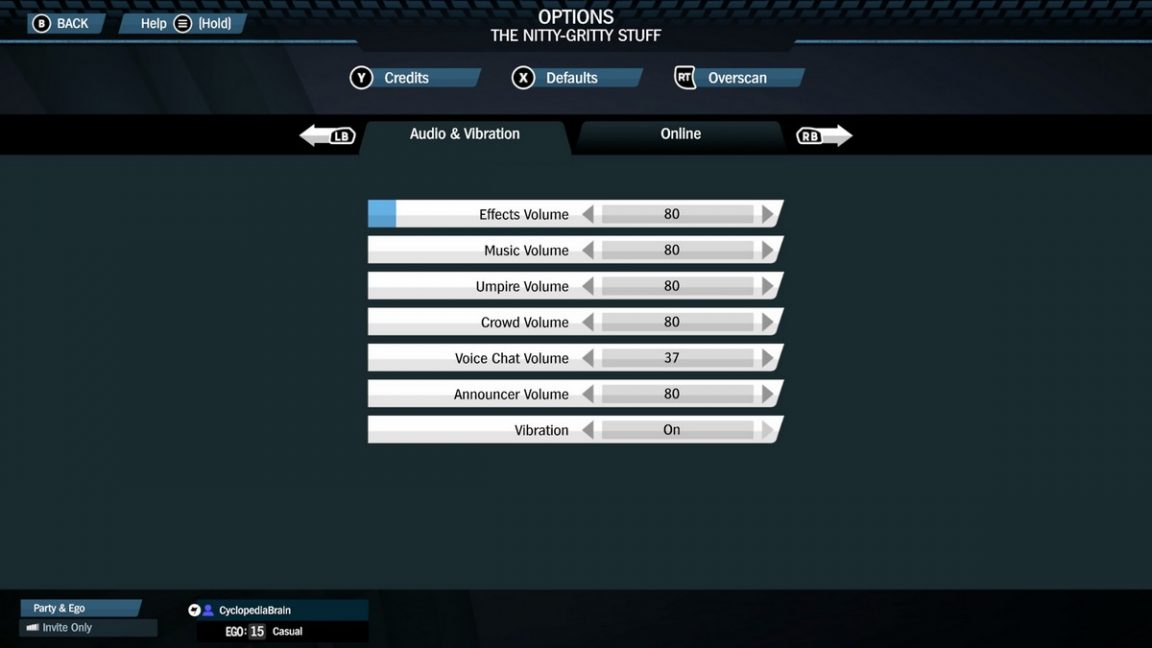 As for options, there are volume options. That’s it. No controller remapping, no control scheme options. If you aren’t able to use what they’ve given you, you simply can’t play the game, which is such a shame because it could be a fun twist on the usually very serious realism in other baseball games.

Last this month is Xenoblade Chronicles: Definitive Edition, which for me was the best of the lot, though largely due to Switch’s new system-level controller remapping. Before we get into accessibility though, you might be wondering if the characters’ battle chatter is as annoying as it was in Xenoblade Chronicles 2. Rest assured, it is. But deaf and hard of hearing players don’t have to worry about this because it’s not subtitled. We don’t have to hear the guy shout about how he has to get stronger 8000 times. See? Sometimes lack of accessibility isn’t so bad. 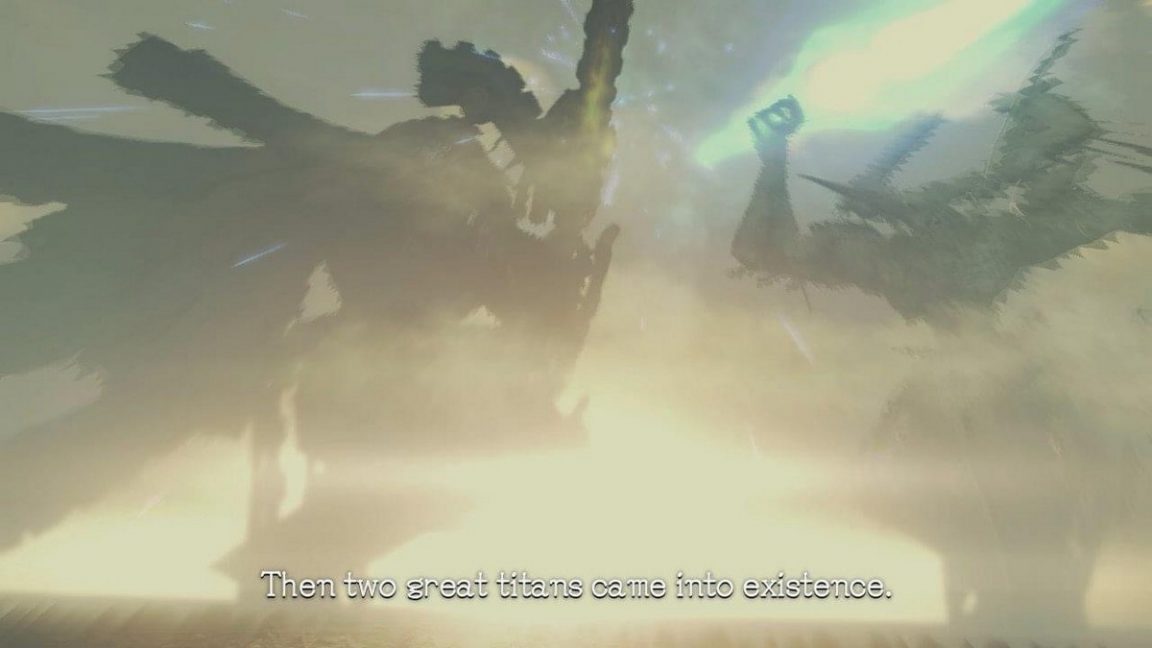 The subtitles are nicely sized and while contrast can still be problematic, the drop shadow helps with that quite a bit. 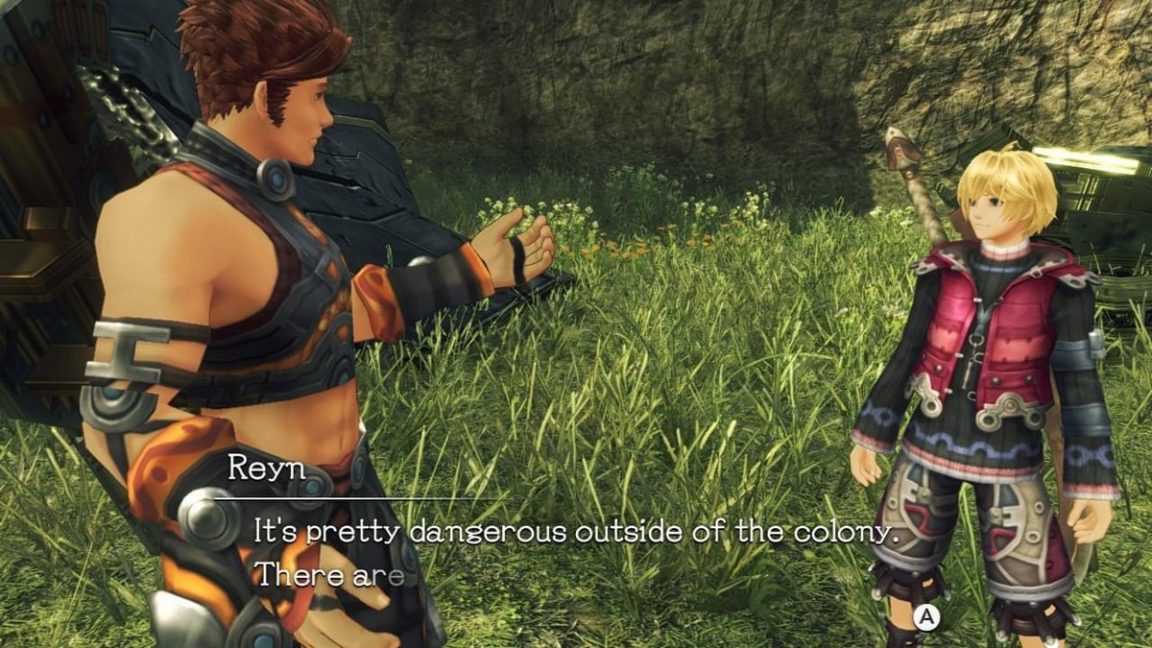 In keeping with JRPG fashion, the subtitles are presented in multiple different ways, some better than others. Cinematics lack speaker identification, but it’s present in cutscenes and in-game. Cutscene subtitles also feature that annoying and not always easy to read text scrolling effect, though players are given speed options for this, at least, and again, in keeping with JRPG fashion, tapping a button makes it appear instantly. 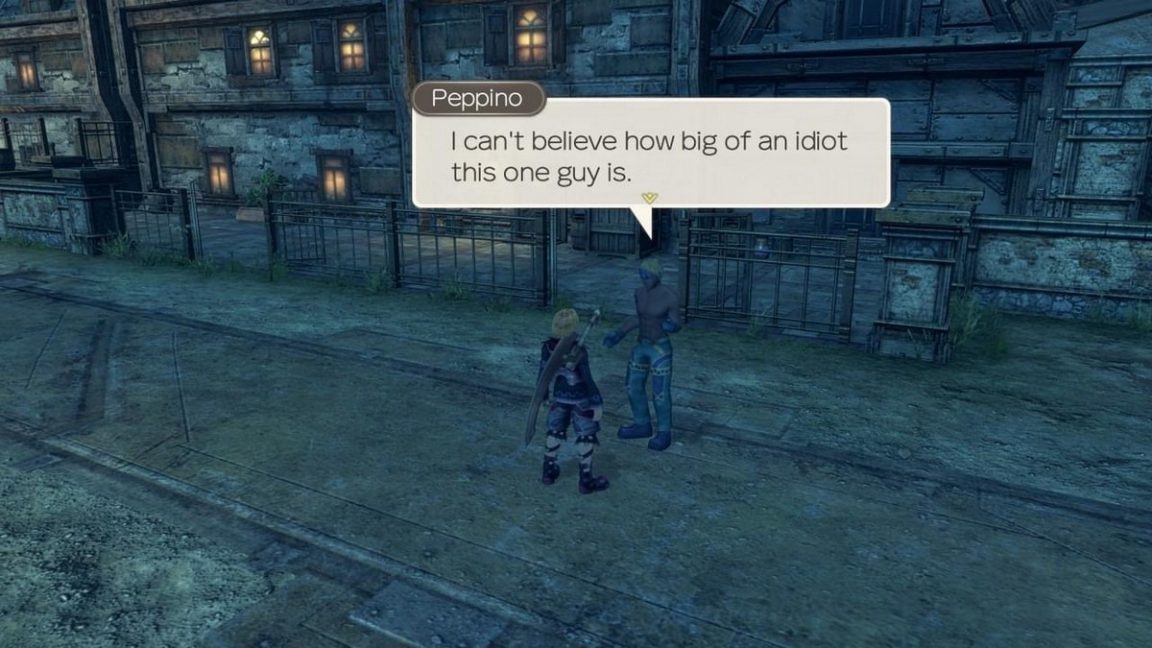 The in-game subtitles are nice and big and have a background. 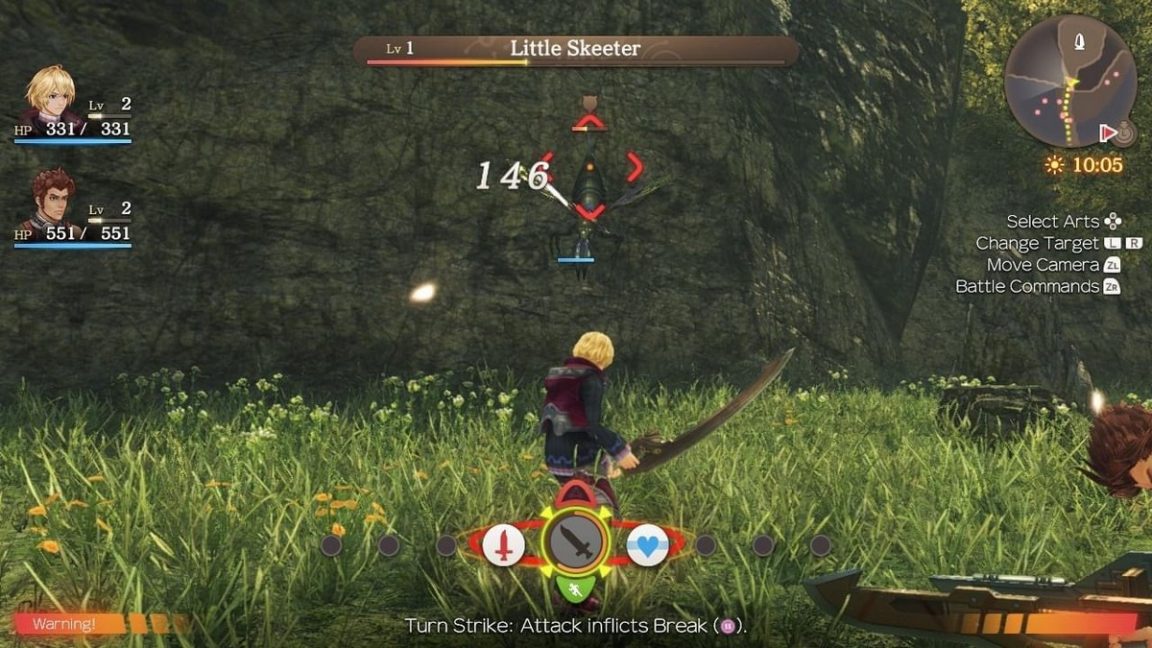 This game also plays itself, to an extent. Melee combat is automatic once you’ve selected your target. All players need to manage is movement and selecting what moves you’re going to do. This is a welcome feature in melee-heavy games for people with low mobility or joint pain that can’t do the melee button mashing. 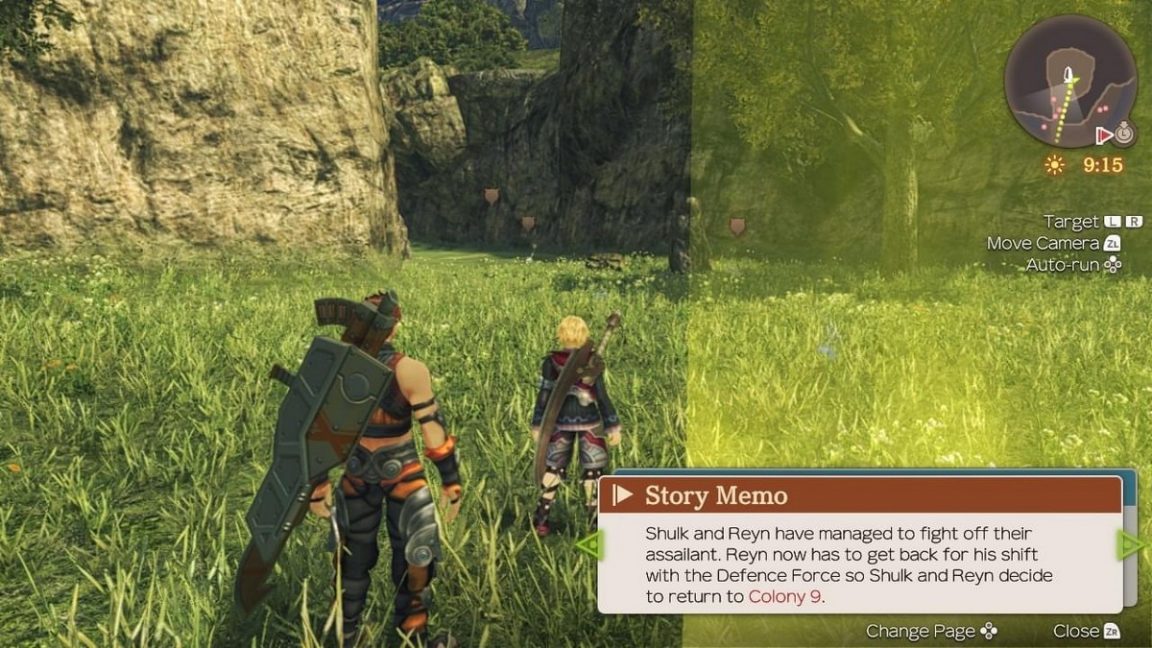 My favorite feature in Xenoblade Chronicles is the Story Memo. Need to be reminded of what you’re supposed to be doing? Just tap ZR and you’ll be shown a refresher. This came in handy for me because I made the mistake of visiting every exclamation point on my map and ten minutes into the game I had about 85 side quests and had forgotten what my original goal was.

The game also features auto-run, which is a great accessibility feature but only when it works. And this doesn’t. Toggling auto-run here will make your character run into a straight line into whatever might be in front of them (or off a cliff like I did in my experiment with auto-run) and the second you steer, auto-run turns off.

And there you have it! Minecraft Dungeons and, surprisingly, Xenoblade Chronicles win accessibility for May.

Courtney Craven is co-founder of Can I Play That?