The Heart of Ender is just about the toughest boss in Minecraft Dungeons to brute force, but it is possible.

While the previous Arch-Illager fight isn’t too difficult, the Heart of Ender’s beam attacks and fast movement are a whole different story. Where in other boss fights you don’t have to worry too much about dodging and positioning, if you take the Heart of Ender’s power for granted then you’ll quickly fail.

Here’s how we’ve beaten the Heart of Ender in Minecraft Dungeons. 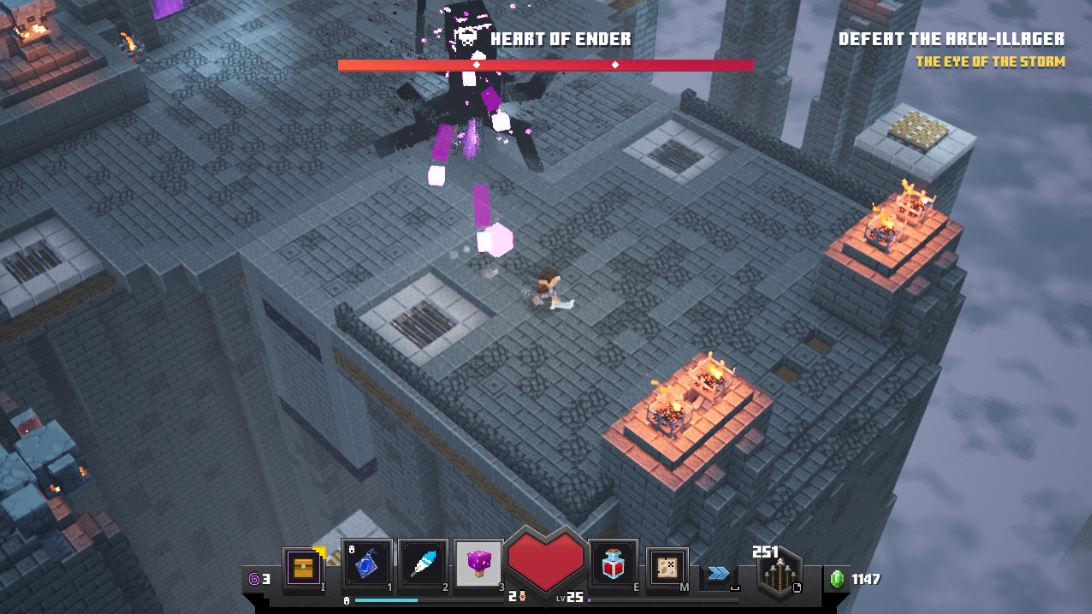 How to beat the Heart of Ender in Minecraft Dungeons

If you want to go toe-to-toe with the Heart of Ender, then it’s best to have some movement buffs to help you close the large distances it quickly covers.

Remember, you’re trying to hit the part of the creature with the purple Orb of Dominance – don’t waste time chasing any other part of its body.

As it teleports around the boss arena, it can be tough to get close enough for melee. And if you stand still long enough to fire off ranged attacks, you’ll probably take a lot of damage.

This means you should look to equip the Boots of Swiftness or Light Feather Artifacts which let you get to melee distance quickly, so you can punish the small openings as it resets for a new attack. You could also try the Swift Footed Enchantment.

Your best opening is just before it starts to do the four laser beams in a circle, so that’s the time to use your Death Cap Mushroom or other attack buffs.

Move your character out of the way of the straight beams where it pops its head out of the ground, then get ready to swoop in as it teleports and gets ready to shoot in a circle.

Don’t be tempted to try and sneak hits in while the four beam circle attack is ongoing, just position yourself between the beams and walk in time with the rotation of the circle.

For more of a cheese strategy, try finding a set of armor with the Potion Barrier Enchantment. This lets you take 90% less damage from attacks when you drink from your health potion.

With this Enchantment, you don’t need to worry about the beams – you can just walk through them and throw out as many hits as possible.

Tanking the hits in this way – if you stack it with additional healing like the Radiance Enchantment or a Soul Healer – can defeat the Heart of Ender very quickly.

It’s a good idea to stack healing sources in general for this fight, since it’s easy to make a very damaging mistake, but either way you should prevail with patience.

Another even easier way is shown by YouTuber Dead Zpikes in the below video:

Basically, you use the high-damage Firework Arrows to hit the Heart of Ender at a distance, then walk off the edge of the arena to make use of your lives and respawn with the cooldown reset.