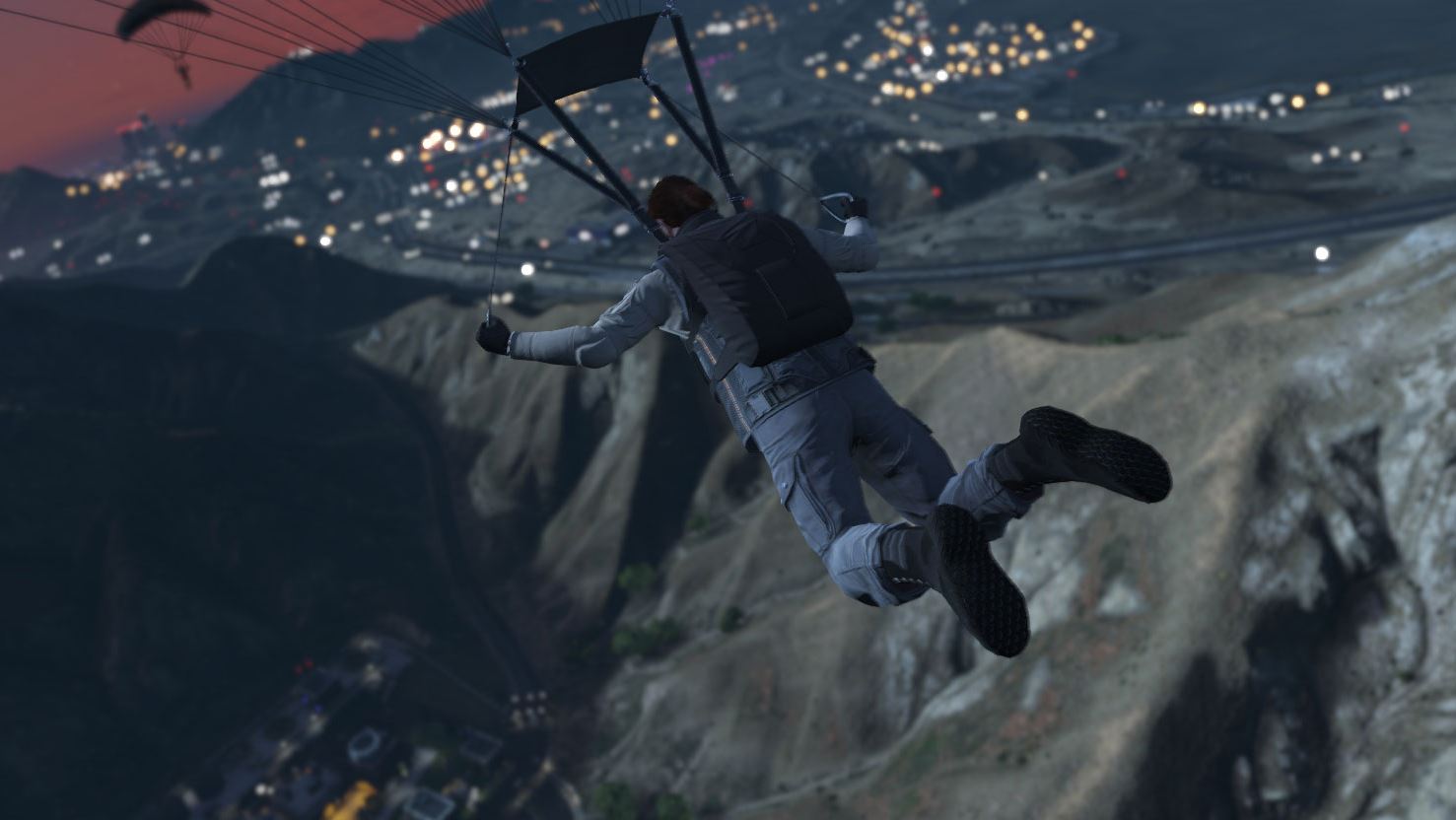 Once you’re done with The Fleeca Job, you’re ready to move onto your first proper heist. You won’t be able to launch it until you get a call from Lester telling you it’s available.

The Prison Break is a four-man heist, so you’ll need two more people if you’ve just come from The Fleeca Job.

Set-up cost is $40,000. You have to rescue Maxim Rashkovsky, an “exceedingly vain” man who’s paying to have himself busted out of jail. Ready? You’d better be.

The Prison Break has four set-up jobs. You can complete them in any order.

How to do The Prison Break set-up 1 – Plane

The Plane set-up job is the first one on the board. One player will be the pilot and the other three will be the ground team.

This section’s straightforward. The three members of the ground team need to stay together, so be sure to ride in the same car. Everyone then needs to drive to Mckenzie airfield. You’re going to get attacked by many cars brimming with bad men, so be ready for action. Once you’ve arrived, kill everyone and locate the plane. You’re best using either a Special Carbine or the Bullpup for this. The plane’s in a hangar at the top of the runway. Once the pilot has the aircraft, the ground team need to clear any cars from the landing strip in preparation for take-off. The pilot then flies the plane to the airport on the south side of the map. You won’t get attacked again, so this is just a case of flying to the yellow dot and putting the plane on the ground. Once you’re in position you get paid. You’ll be sent back into the open game. There’ll be an invite on your phone to continue the heist. Just hit it and you’ll be taken to your apartment.

How to do The Prison Break set-up 2 – Bus

You’ll need to invite everyone back into the heist. Once that’s done, you’re ready to start the second job. Bus is the second set-up job on the board, but, again, you can take them in any order you like. There are no teams in this set-up. Follow the GPS to the bus. When you find it just get out of the car, shoot the driver, steal the bus and lose the cops. The first part of this involves taking down the bus’s escort chopper. A homing rocket will make short work of it.

Then you need to lose the cops. The bus drives like, well, a bus, meaning it’s slow. Go off-road. The best method is to get away from any blacktop and sit in the middle of a field. Hardly glamorous, but it’ll work. Once you’ve lost the cops, you’ll need to take the bus to a drop off. Don’t go anywhere near police cruisers. If they see you you’ll get a single star rating and have to sit in the field again. Deliver the bus. And that’s it. You get paid.

How to do The Prison Break set-up 3 – Station

This is a tough job involving two teams, one called Cop Station and one called Cargo Ship. The Cop Station team, dressed in police uniforms, needs to grab a police cruiser in order to steal some files from the local constabulary. An easy way to do this is by calling the police on your phone. When they arrive, just pull the cops out of the car, kill them, get in and drive away. You’ll then need to get rid of your wanted rating. It’s worth noting that you’ll have all your weapons taken away from you apart from a nightstick and a gun. Now go to the police station, park on the yellow marker and walk inside. Don’t get your guns out, don’t run and don’t attack anyone. Just get out of the car and walk up the steps. One of you will walk into the back of the station and steal the police bus schedule. Once you have it, just walk back outside, get into the cruiser and drive away. If it all goes well, no one should pay any attention to you. Now you have to take the police cruiser to an underpass. Set it on fire with petrol, as instructed. You then have to take the schedule back to the planning room. When the Cargo Ship team completes their tasks the job will end. While the Cop Station team’s grabbing the documents, the Cargo Ship team members need to steal a car from a ship. After killing the guards on board, they have to shoot open a container to reveal the car before driving it away. We’ll get you images and better details on this team’s objectives from the next playthrough.

That’s three down. One more to go. How to do The Prison Break set-up 4 – Wet Work You’ll need to kill some lawyers in this set-up. It shouldn’t take you too long.

There are two teams in Wet Work, one named City Hall and one named Mansion. The City Hall team members follow the marker to a ladder and make their way to a rooftop vantage point. Now you have to shoot the two lawyers after they drive up to the City Hall steps. You must time this. One guy’s carrying a briefcase and the other isn’t, so take one each and snipe them both simultaneously.

Now you need to get the briefcase. Loads of cops converge on the steps after the lawyers die. You have to charge through, the passenger has to run out of the car, grab the case and get back in as quickly as possible. You’re best using a fast vehicle for this. A sports car, such as a Zentorno, will work well.

After that, it’s just a case of losing the cops and delivering the papers to the planning room.

Meanwhile, the Mansion team members go to a building and use stealth to take out the guards inside. If they get made, the target will escape and need to be hunted down and shot. We’ll get better details and images from the Mansion team section from the next playthrough.

Once all the lawyers are dead and the papers are back at the heist planning room, you’re all set. Now for the big one.

How to do the finale – The Prison Break

You’re now ready to move onto the heist itself. Be prepared to die, because it isn’t easy.

Firstly, a note about money. If you’ve been hosting The Prison Break’s four set-up jobs, you won’t have been receiving any money for their completion. Also, you fronted the cash to get the whole thing started, so just remember you need to get paid. The default set-up for the finale pay-out is 55% for the host and 15% for the others, but things seem fairer if you bump it up to 20% for the rest of the crew. What goes round comes round, hein?

There are four separate roles in this finale, one for each player. They are: Prisoner; Prison Officer; Pilot; and Demolition. The Prisoner and Prison Officer enter the prison by just driving up to the door. You move inside once the gates open, park and get out. You then need to make your way to Rashkovsky. Both times we attempted this a guard made us and opened fire, and we’re unsure as to why as yet. No matter. Once the alarms go off, NOOSE agents (anti-terrorist types) swarm the central prison courtyard. You need to drop them and find Rashkovsky, who then starts to follow you. Push forwards through the courtyard and kill everything. Rashkovsky will only move forwards when the area in front of him is clear of NOOSE agents. If you’re the Prisoner, you’re going to be lacking guns. Pick up SMGs from the dead security guys to make things easier. You’re going to be doing a bunch of killing here.

While the Prisoner and Prison Officer are fighting their way out, the Pilot is in the air waiting to pick them up. Military jets will constantly arrive and try to take the plane down. It’s the Demolition’s job to destroy the jets with the Buzzard.

Eventually, the Prisoner and Prison Officer will arrive at the prison gate with Rashkovsky. You need to get into an armoured car (we found one handily placed on the approach to the gate) and Rashkovsky will get into the back and close the door. Charge out of the jail and make a break for the designated airfield.

At this point, Demolition needs to switch his attention to defending the Prisoner, the Prison Officer and Rashkovsky, who attract a lot of attention from police choppers and heavy security vehicles thanks to a five-star wanted rating. The Pilot lands at the airfield and waits for the others to arrive. When they arrive at the airfield, the Prisoner, Prison Officer and Rashkovsky need to get into the prop plane so the Pilot can take off. There’s going to be a lot of heat, so instead of standing around shooting just get into the plane as fast as possible and get into the air. Demolition stays in the Buzzard and starts picking off police choppers as they worry the plane. The Pilot then needs to lose the cops. Once the Pilot’s evaded the police, they’ll fly to a marker and everyone will automatically jump out over a beach for the Demolition to pick them up in the Buzzard. Parachute down, but be careful you don’t get sliced up by the chopper blades! After all that, the last thing you want is a daft accident right at the end. Once everyone’s in, Demolition flies back towards the city, the cutscene rolls and you’ll get the payout details.

Congratulations. You made it.

Head back to our GTA 5 Online Heists guide.