Banks, EMPs, whatever. GTA Online Heist’s fourth job is what it’s all about – and it’s now free via GTA 5 on the Epic Games Store. Let’s steal a ton of drugs.

OK, team. The Fleeca Job, The Prison Break and the epic Humane Labs Raid are all in the bag. You’re a goddamn winner. But Heists isn’t over yet. Remember Trevor? He loves drugs. He needs drugs. You are going to bring him a huge amount of drugs. The drugs are going to be the series A funding Trevor needs to grow his company, Trevor Philips Industries. Obviously.

Before you get going on this heist, you should know that these missions strongly feature driving while under fire. Stock up on heavy armour from Ammunation at the start of each job. You can put on a new vest at any time from a stock of seven: just bring up the Interaction Menu, go to Inventory and then select Body Armor. 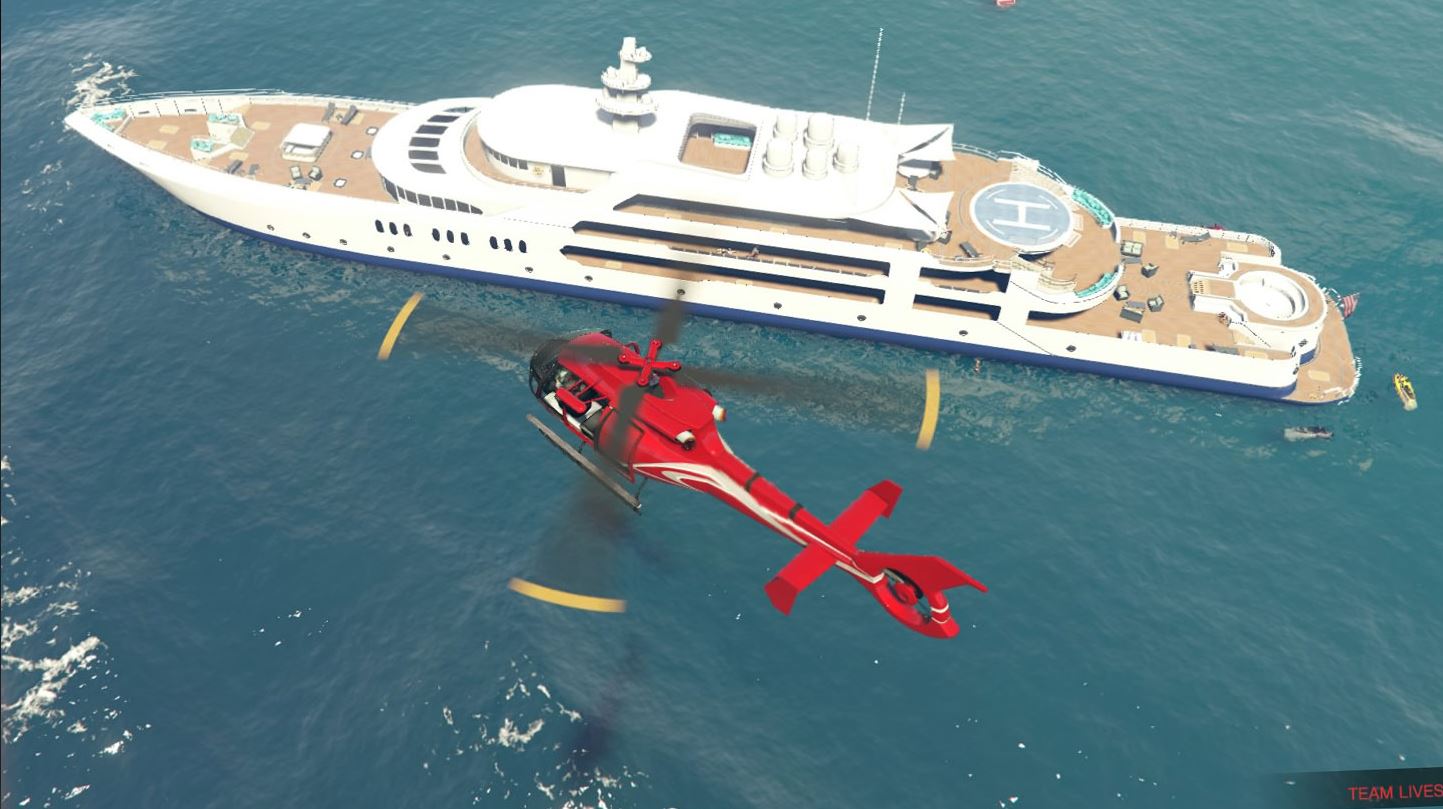 How to do The Humane Labs Raid set-up 1 – Coke

This is a tricky start to the heist. The objective here is to steal packages of coke from frat boys on a yacht. You’ll be split into two groups, the Boat Team and the Helicopter Team.

The Boat Team, unsurprisingly, goes to the boat while the Helicopter Team goes to the chopper. The Boat Team goes to stern of yacht, jumps into the water and enters the lower deck. You’re going to be shooting loads of dudes at close quarters, so consider the assault shotgun. Go into the engine room, kill everyone and pick up the packages of coke. You’ll have to give the Boat Team some time. The yacht’s interior is confusing, and it isn’t obvious how to get from the lower sections at the back of the yacht to the other packages of coke at the front. The job’s designed for the Helicopter Team to collect the other packages after landing on the yacht. Once the Boat Team’s found the stairs to the front of the vessel, killed everyone and collected the drugs, they should get off the ship, pick up either the boat they arrived on or jet skis, and race back to the beach. Now all four players need to lose their wanted ratings and get back to the warehouse. And that’s it. Ron’s all smiles and you get paid. This can be seriously troublesome if you don’t know what you’re doing, as two of the players in this set-up are constantly exposed to fire. Read our advice carefully and you’ll succeed.

The aim of Trash Truck is to steal bin-bags full of molly pills from Vagos drop-offs. There are two teams on this job, Operators and Collectors. You’ll also be up against a ten-minute timer which kicks in when you arrive at the first drop. First off, go to South LS Recycling, kill the dudes and steal the trash truck. The Operators drive and the Collectors stand on the back. You now go the first pick-up on Forum Drive. This one’s just to show you what to do, so you won’t be attacked by the Vagos. The Collectors jump off the back of the truck after it’s stopped on the marker, run to get the bin-bags and throw them into the back of the lorry. Then go to Capital Boulevard. This time, you’re going to be attacked by the Vagos when the Collectors bring the first bags back to the truck. The trick to succeeding quickly on this job is to get the bags in the truck and just leave. Don’t worry too much about killing the AI. Note that there are three bags this time, so make sure you get them all. Watch the bag marker in the bottom right of the screen.

You’ll then drive to Vespucci Boulevard. There’s a simple trick to beating this stop. Once you’ve parked the truck on the yellow marker and triggered the event, drive it to the other side of the street and reverse it into the alleyway near to the bags. All the Collectors should have to do is hop off, throw the bags in and get back on. The Operators shouldn’t even have to leave the truck. Forget about killing the AI. Get the bags in the truck and leave. On the way back to the warehouse you’re going to be attacked by more dudes in cars. Make sure you’ve topped up on armour and just keep shooting. The timer vanishes when you get near the warehouse and the Vagos will end their attack. Drive down the dirt tack to the yellow dot and you’ll complete the job.

How to do The Humane Labs Raid set-up 3 – Bikers

This one should probably be harder than it actually is. Bikers is a stealth mission, but the targets are nowhere near as sensitive as they are in Deliver EMP from The Humane Labs Raid.

The objective here is to creep into a Lost camp, kill everyone, steal two vans full of meds and deliver them to Ron. There are no teams on this job. First, go to Trevor’s trailer. He’s supplied a bunch of silenced weapons for you, should you need them. Grab whatever you want. Now you need to go to a dinghy. It’s only a few hundred yards from the trailer. Get in and sail to the Lost camp. When you arrive, approach the camp and take out the guards with either melee kills or silenced weapons. A silenced assault shotgun works well for this. If you spook anyone the mission will end, so keep talking to each other and watch the detection cones on the mini-map. And remember: click L3 to sneak so you don’t make too much noise. Once you’ve killed everyone, you need to find the vans. You can see the location in the shot below. They’re on the north side of the camp. Steal the vans and make a break for it. You’re going to get hammered by dudes, so, again, make sure you’re topped up on armour and just drive as quickly as possible with the passengers constantly shooting the Lost from their bikes. Drive for the Lord, should you have one. Drop the vans at the warehouse and you’ll end the job. How to do The Humane Labs Raid set-up 4 – Weed

Weed’s objective is to go to the sawmill and steal two Benson trucks full of dope from the Ballas. There are three roles on this job: Ground Team, Lookout West and Lookout East.

Drive to the sawmill and get into position. Snipe the Ballas until you’re happy you’re clear enough to proceed. More dudes are going to spawn, but don’t worry too much about killing every dot. Just use long-shots from your original position, then move in carefully and grab the vehicles. Be warned: some Ballas are hiding in the pipes on the approach to the sawmill. They’re hard to hit as they don’t stand up. Just keep plugging away at them and they’ll eventually die. The Ground Team take a truck each and the Lookouts grab the Technical, an armoured jeep with a mounted gun. Everyone should top up on armour. The Technical leads out, killing the Ballas and clearing roadblocks. Stick together! It’s a long, difficult drive back to the warehouse, and whoever’s using the mounted gun on the Technical is going to have to be efficient. Be careful when you come out of the first tunnel after the sawmill, especially if you’re driving one of the Bensons. If you’re going too fast you can lose the road and tip the truck down the mountain.

Get the trucks back to the warehouse and you’ll get paid.

Bet you can’t guess what you have to do here. The O’Neil Brothers are cooking crystal up at their farm. You need to steal a tanker of “meth juice” and deliver it to Trevor’s cook at a gas station. There are no teams on this job. Drive to the farm. When you arrive, you’ll be instructed to kill the meth dealers. Use your sniper rifle on the approach and clear out all the rednecks you can see. Move up to the building and use a shotgun to shoot enemies through the windows. The rednecks aren’t so tough. Someone should now go grab the rig while the others keep shooting, drive it round and hook it up to the trailer. Just reverse the cab onto the trailer and it should automatically attach.

A timer will start as soon as you grab the trailer. Drive the truck to the gas station before the timer runs out and you’ll get paid. The other players will need to escort the truck and clear out attacking enemies. If the truck takes too much damage it’ll explode. Watch the vehicle’s health bar in the bottom right of the screen. And you’re done. Now onto the finale. This finale is short compared to the others, and you should have no real problem completing. Just remember: keep topping up with armour when you run out, and you must stick together on the driving section if you want to succeed.

The objective of Series A Funding is to go to the warehouse and move two trucks full of drugs. The frat boys, the Ballas, the Vagos and the O’Niels have all been tipped off as to the whereabouts of their stolen dope. They’re coming to get it back.

There are two teams in this job, Lookout North and Lookout South. Drive to the warehouse. Take up position at the doors at either end. One member of each team should stand at each side of the door. Dudes arrive in cars. Kill them using grenades and assault rifles. Once you’re done, two players will take the Benson trucks and two will get into the Technical, just as you did in the Weed job. Remember to top up your armour! The Technical, again, should lead the way.

Follow the yellow line and drive down the freeway. Each truck has a damage bar and you’re up against a timer. You’ll be attacked by choppers, the Lost and God knows what else. Just keep going and stick together. Whoever’s firing from the Technical will have no shortage of targets and really needs to clear the enemies quickly. Take the choppers out as soon as they arrive. You’ll arrive at the lighthouse after the drive. That’s it. You’re going to see a cutscene and get your cash. Congratulations. You’ve completed Series A Funding, GTA Online’s fourth heist. That means there’s only one left to do.

Head back for the rest of our GTA Online Heists guide.