There’s a new Sims 4 expansion pack on the horizon, just as we were told there would be in the recent six month roadmap.

The Sims 4’s ninth expansion pack is going to be called Eco Lifestyle. There were rumours yesterday that it was going to be a Country Livin’ style pack, thanks to a well photoshopped Target database picture. This was how we found out about Island Living so it seemed possible. After all, horses have been found in The Sims 4’s code, but they haven’t shown up in-game yet. Are Sims fans happy about that? Neigh. 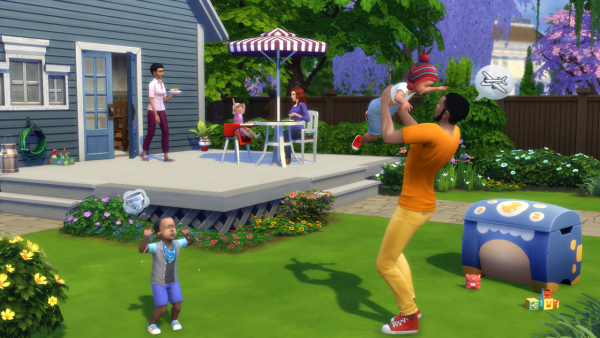 The Sims team has recently asked fans to vote on a new stuff pack – turns out Sims fans really want their Sims to be knitting over a ghost hunter career, beats me – right down to the name and logo of the pack.

More recently, the Sims Gurus (the super active, internet-involved members of the Sims team) tweeted out some random letters that spelled out “Future Cube”, which is an item in the game. It’s basically a magic 8 ball and predicts the future. It’s had a lot of fans wondering what the hell it means, and some content creators have been making videos trying to uncover what the new pack is going to be.

Yesterday The Sims Twitter account posted a gif of a wind turbine with the caption “Green Plumbobs? I’m a big fan!” – a pun so bad it seems like our Kirk McKeand is secretly part of their marketing team. It accompanies a link to The Sim’s YouTube trailer premiere which is happening today at 4pm UK-time.

You can watch it here:

What we’ve seen so far is a world with a lovely mountain backdrop, accompanied by some forestry areas. It looks European to me, so I’m excited to see what the new world looks like properly. There’s a lot of speculation going around the internet at the moment about what could be included, based on previous questionnaires the Sims team has sent out asking fans what they want from the game.

Classic EA also accidentally leaked its own webpage for it yesterday, too. It takes you to a 404 error page now, but that didn’t stop some eagle-eyed Simmers from nabbing a screenshot of it. That’s how we know the full name of the expansion pack and the fact that it is definitely an expansion pack. The leaked description of the pack is as follows:

“Ready for your Sims to impact their world? Move into a community of fellow collaborative makers in The Sims 4 Eco Lifestyle Expansion Pack!* Play to change and make a difference in the new world of Evergreen Harbor. Help your new neighbors decide on a Community Space Project, reduce your eco footprint, and watch your neighbourhood transform. You’ll be surprised by what happens when your Sims start making the rules.”

I am hyped. The little eco warrior in me is screaming. I feel almost as excited by this as I was by Cities: Skylines’ Green Cities expansion. Sure, there’s a few things similar to this already in The Sims 4 – we have the Conservationist Career from the Island Living expansion pack, where Sims are also able to live off the grid. There’s also the option in the Laundry Day Stuff pack to use more eco-friendly options to wash clothes instead of a washing machine and tumble dryer. But none of that really adds up to a whole world of eco-friendly options, which is what I hope we’ll see this afternoon when the trailer drops.

Want more Sims? Take a look at Trevor’s trailer from GTA 5 recreated in The Sims 4.