John Wick Hex may give you time to reflect on your decisions, but it’s still a white knuckle thrill ride that’ll create a swamp of tension sweat in your armpits when you dig deep into its sublime tactical gunplay.

It’s also an incredibly unforgiving game, one that doesn’t hold back on relentlessly punishing you for a single bad choice and reigning all manner of hell down on you should walk in unprepared. Wick’s quest is one that’ll take him across the world, eventually leading to showdowns with end stage bosses who’ll require some extra cunning to dispose of.

If you’re feeling up to the challenge of stepping into the shoes of the legendary Baba Yaga and you could do with some advice on taking down the most notorious henchmen of the enigmatic Hex, here’s a guide on how best to approach those lethal targets.

Now it’s out on PlayStation 4 and PC, we’ve updated our guide to help you nail those difficult bosses.

If you’re wondering if it’s for you, check out all the critics reviews for John Wick Hex here.

True to its nature of distilling the John Wick formula into an authentic video game experience, John Wick Hex is all about creating open lines of sight between you and a target. Don’t be afraid to duck out of those linear killzones either, and pop back up to finish the job as John can easily roll behind cover, change his stance and catch his breath.

While there will be plenty of shootouts to take part in, John Wick Hex also throws some fisticuffs your way via martial artists who’ll flood the screen, and it’s not exactly uncommon to be swarmed by them. Your best bet here is to make certain that your focus meter is full, perform takedowns on the most pressing enemy and repeat until you’re out of a corner.

As for the gunplay, know your weapons. Wick’s custom handgun and 9mm pistols that you can scavenge from fallen foes are your most reliable guns, balancing superb range, average damage and nippy reaction speeds into a Jack-of-all trades package. Revolvers may be powerful but they require a dangerous amount of time to pull the trigger, machine pistols are only useful at close range and SMGs will chew through ammo like there’s no tomorrow.

Shotguns have incredible odds for always nailing a shot but also have a long lead time between target acquisition and buckshot dispersal, carbine rifles are rare but perfect for taking down bullet sponges and bullpup shotguns are brilliant in close to medium quarters range. The key here is to stay flexible, smart and always on the move. With that in mind, here’s a look at how you can take down John Wick Hex’s deadly marks.

Your first real challenge may not push the legendary assassin to his breaking point, but the Chinatown hideout that Edgar inhabits is still more than capable of ending your hunt if you’re not too careful. In this stage, you’ll need to deal with some light resistance as you work your way through a snaking corridor. 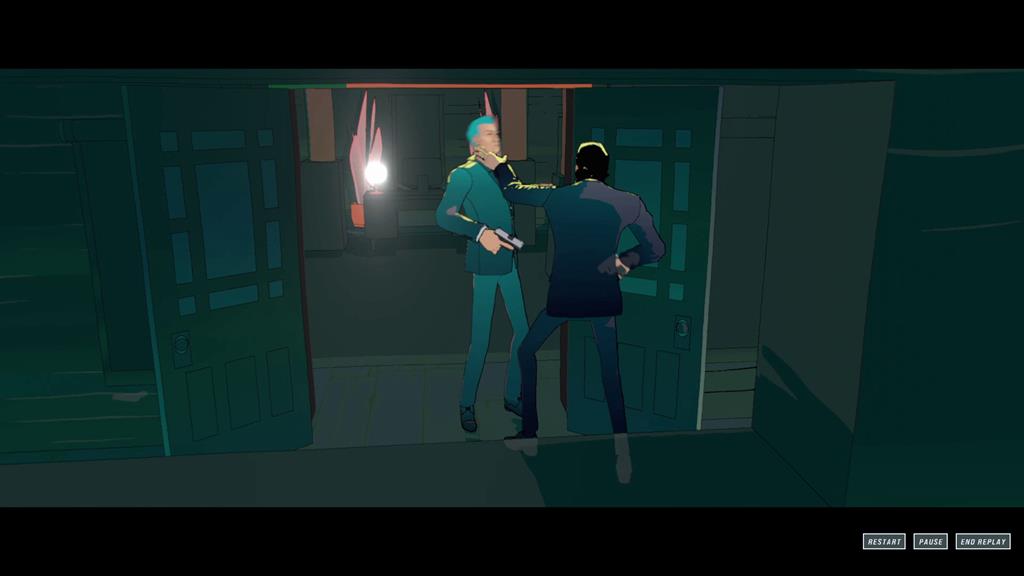 Keep low, change your stance to pick off security guards quicker and soon enough you’ll be at Edgar’s office. Like most of the boss fights in John Wick Hex, it’s best to lure him out while keeping an eye open for any goons who’ll spawn in the corridor behind you once you reach a trigger point. Break his line of sight by hiding next to the entrance of his office, wait for him to reach an optimal ambush zone and launch a surprise attack on him. A few takedowns and some high velocity lead delivery later, and you’ll have scratched one name off of John Wick’s dinner reservation list.

The burly brawler waits for you in his penthouse loft, but you’ll have to once again clear the room of any opposition. You’ll be dealing primarily with brawlers and security here. Try to avoid the center of the room, as its lack of cover points creates a killing zone that can quickly see Wick swarmed and overpowered by the assembled mob. 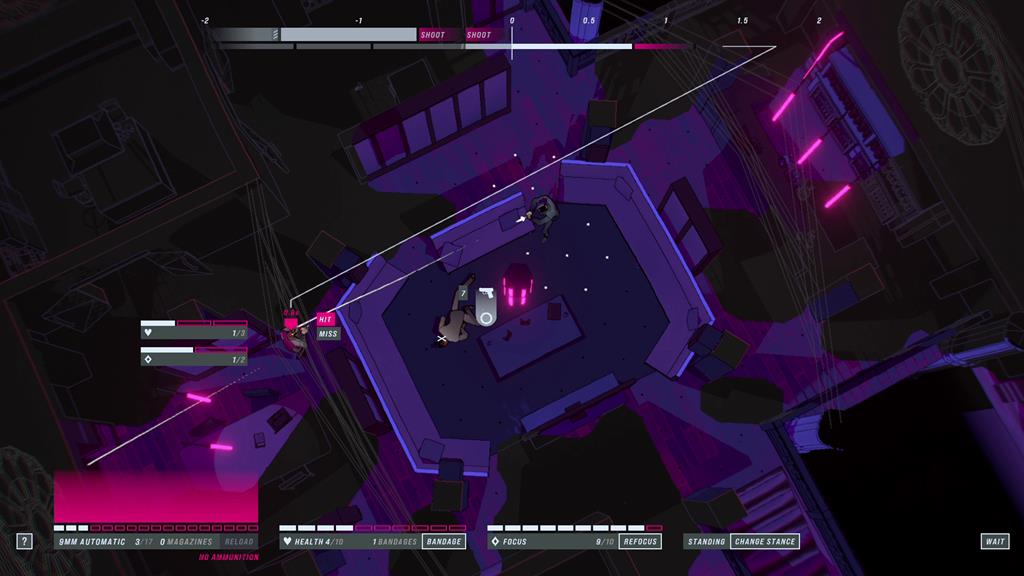 Work your way along the sides, picking off enemies and using the cover to your advantage, and do an extra sweep around the room before you pay Osborn a visit. Once you open his office, prepare for a fight! Osborn has one security guard watching his back, so take him out and wait for Osborn to stroll into view. Once he’s in the doorway, start stunning him with takedowns while staying alert for new enemies who’ll spawn in.

The door frame location should give you ample time to take Osborn down without having to worry about reacting to additional enemies, eventually ending with Wick finding another clue to his next destination.

The mission is getting tougher by now. Holed up in her ship and ready to make a final stand, the Harbour Master waits for you at the bow. Her personal army stands before you, and they’re more than ready to soak up a few bullets if it means ending the legend of John Wick. Right from the start, you’ll have no less than three enemies to deal with, two security and at least one martial artist who’ll make a beeline for Wick.

From there you’ll need to work your way through the bowels of the ship, a twisted maze of corridors that can easily trap you with multiple heavy soldiers and brawlers. Keep your focus refreshed, navigate a mere step at the time and be prepared to roll out of harm’s way at the drop of a spent ammo magazine because where there’s one danger there are usually several in this stage. 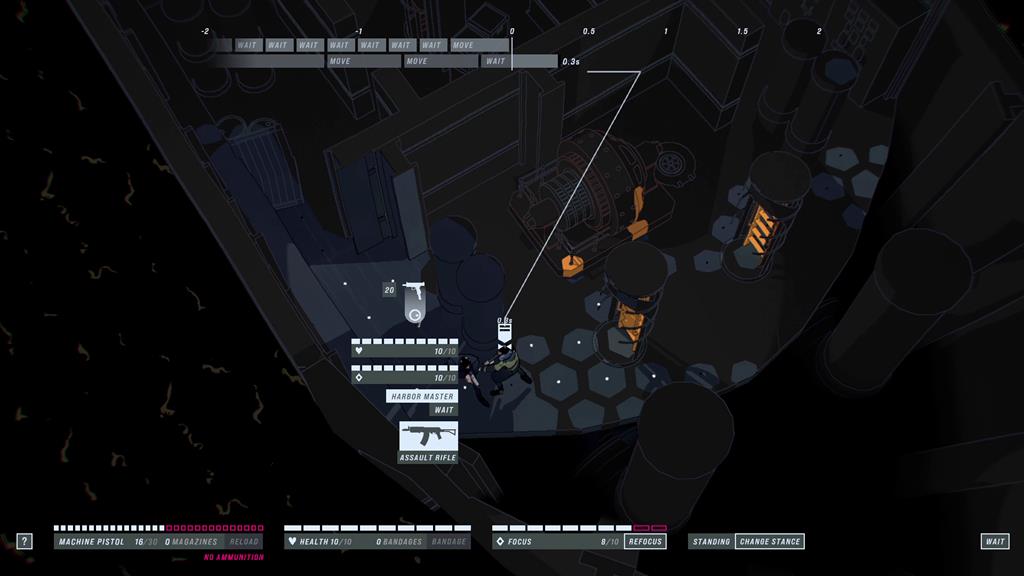 The Harbour Master herself is no pushover, although a prepared assassin can make short work of her. Once you’ve dealt with the burly goons before you reach the bow, grab a machine pistol and set up shop near the support pillars. Avoid a battle of fists or a shootout as the Harbour Master can shred your health bar in a single turn with her weaponry, and trick her into walking into your not so safe space so that you can land a takedown. From there it’s an easy as emptying your ammo clip into her. A few gold coins paid to the High Table travel agency and you’ll be jetting off towards your fourth target.

While there’s no real boss fight to prepare for at the end of this level, Yoshiko’s art gallery fortress is still a collection of hexagonal rooms that hide many a treacherous trap as you work your way through them. Your starting location is an excellent example of this, as Wick can easily attract the attention of the roaming security guards and create a meat grinder within which to ply his trade. 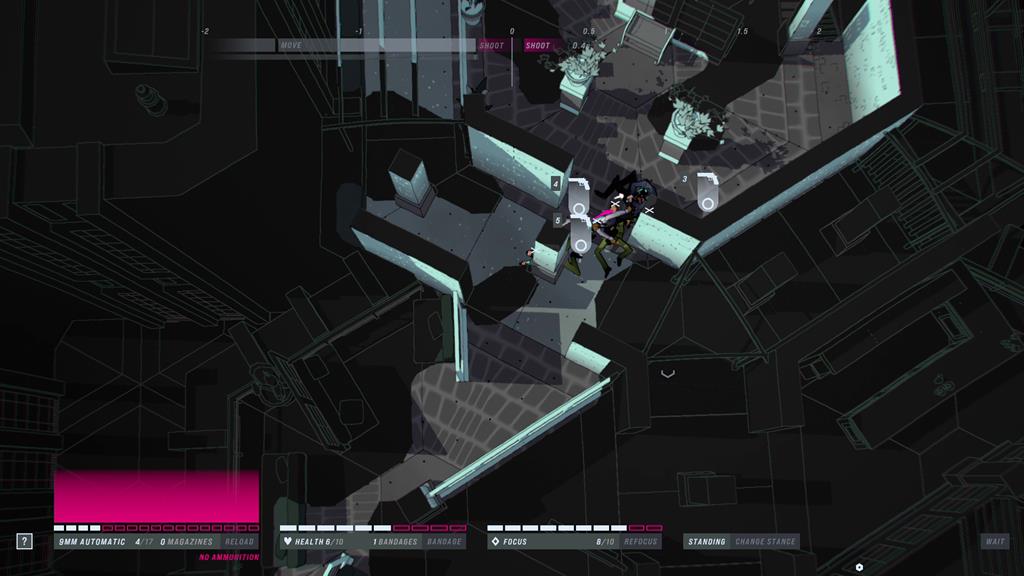 Stick to the walls, be wary of the brawlers who’ll rush you while security aims for your fashionable head and use the corners to your advantage. Within a few minutes, you’ll be ready for the next challenge while the Continental Hotel’s dinner reservation staff will be checking to see if they’ve got enough plastic to clean up your latest massacre.

Hex’s daughter is willing to die for him, and that’s a promise you’ll sadly have to enforce as you explore her garden maze. Before you can even step forward though, you’ll already face some stiff resistance in the form of heavy security. Trigger their hunting instincts, roll back to the right pillar at the entrance and pick them off (I hope you grabbed a machine pistol or SMG from that last hellacious level before you entered the maze!) and ready yourself for a few surprise enemies.

While they’re not great in number, the maze easily hides the numerous goons protecting Omega, so stick to the right side for the safest route through it. Once you’ve mopped up any stragglers, head to the center of the maze where’ll you find Omega. She’s armed with a crossbow that can kill you from a great distance, so hide behind the statue and pounce when she’s in range. 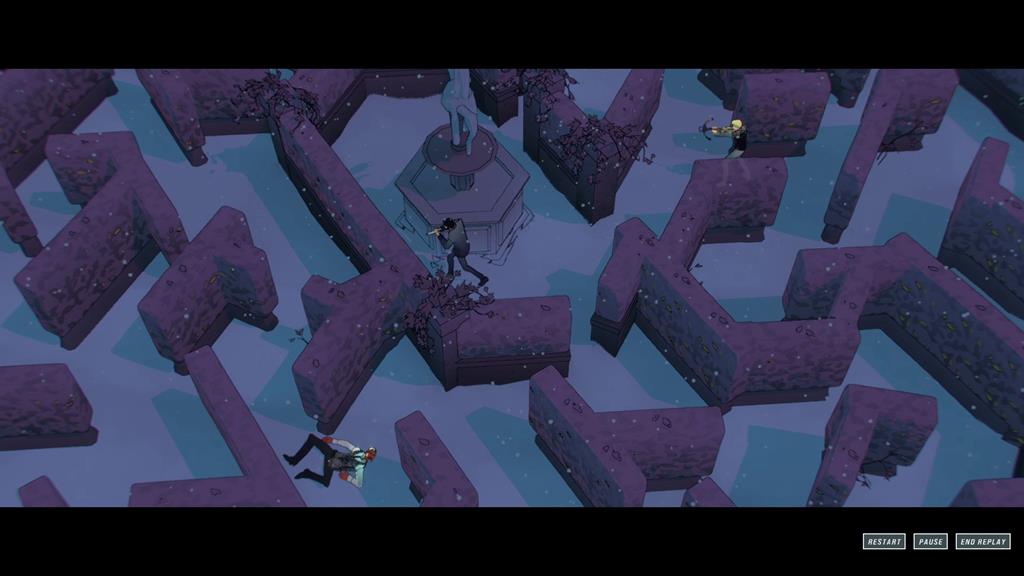 Omega has excellent reflexes, so you’ll need to time your takedown range precisely if you want to get the drop on her. With Omega dead, Hex’s operations dismantled and revenge being the main dish of the day, it’s time to head back to New York to finish Wick’s bloodiest hunt yet.

Hundreds of dead bodies later, an unthinkable amount of lead delivered at high velocity and a showdown between the infamous Baba Yaga himself and the man who would be king all leads to… one anticlimactic finale. With all of his soldiers dead and armed with a mere revolver, the only real opposition that Hex has to throw at you is a disposable brawler who’ll home in on your location once the fight starts. 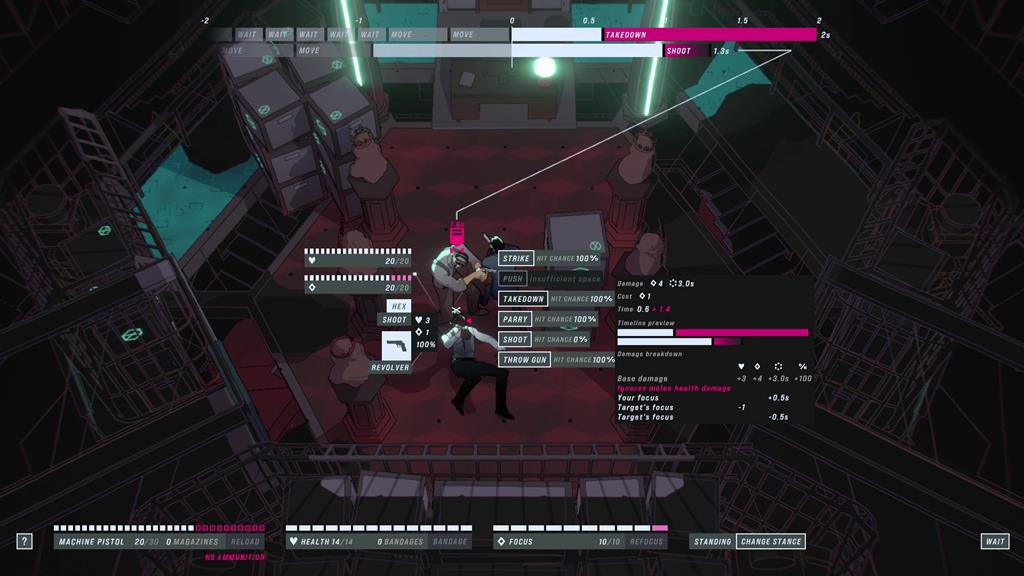 Hex himself is situated right at the top of the screen, so duck behind the nearby stack of crates, allow the brawler to come to you and quickly finish him off. Take him down, wait for Hex to walk into your zone of attack and proceed to stun him with more takedowns and a quick burst of ammo straight to the vital organs. Hex may have some firepower that can knock chunks off of your health bar if you get careless, but that weapon requires plenty of time to line up a killer shot so make the most of the opportunities you’re given to land a parry and close the curtain on John Wick Hex.

If you’re looking for more John Wick Hex, here’s why we think it’s one of the most unique movie adaptations in video games.