Early on in XCOM: Chimera Squad, you’ll need to choose between three factions to face off against, including the religious cult Sacred Coil. After several missions, battling civil unrest and uncovering the secrets about the mysterious group, you’ll encounter a final critical mission where you’ll meet the faction’s leader.

The final mission is made up of three encounters, and while the first two are easy enough to beat, the final encounter ramps up the difficulty significantly compared to every other Very Difficult mission so far. Who you recruit will determine how your final team shapes up, but the strategy moving forward should be much the same.

If you want to up your chances of success, you can check out the XCOM: Chimera Squad console commands here, or you can read on for tips on how to play a strategy game without cheating. 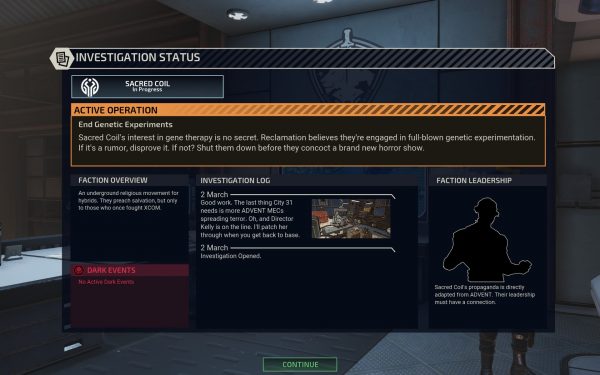 XCOM: Chimera Squad – How to prepare for the Sacred Coil final encounter

By now you’ll have recruited two new members to your team and will have figured out who your favourites are. My favourites were Godmother, Verge, Terminal and Zephyr, so I invested heavily in removing any negative traits that appeared, improvements for the weapons they used and took them on almost all missions to get them up to Special and Senior Agent rank.

Alongside managing your Field teams and civil unrest, you’ll want to keep enough Intel and Supplies to be able to get items from the Scavenger and Supply screen. There are several items you should research and invest in for this encounter, including: 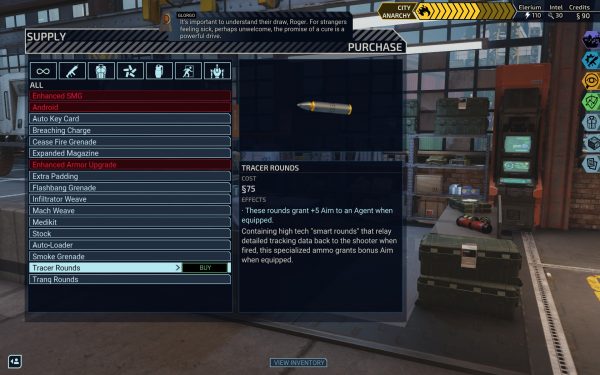 It’s also a good idea to get Tranq rounds early on to capture enemies for more Intel and pick up Scopes from the Scavenger when you can. Expanded Magazines are also a good shout, as well as researching and purchasing Breaching Charges and Auto Key Card.

Extra Padding wouldn’t hurt for some of your teammates if you plan on keeping them out of close range, but I found the +50 Dodge was especially helpful in the final mission as you’ll encounter a bunch of Ronins, whose powers are based off the Chosen Assassin and get right in your face with melee attacks.

I won’t be looking at all the team combos here, but you’d do well to bring a mix of people who’ll be able to pull off some close-quarters combat as well as some ranged attacks, whether they be with Psionics, Gremlins or standard weapons. I tried this run previously with Axiom but he wasn’t as effective as Zephyr, and using two shotgun-wielding allies didn’t work in my favour.

If you select the same teammates as I did, you’ll want to make sure you pick the “right” abilities for the encounter. Terminal’s Pindown ability is super useful to make sure Verge and Zephyr could be moved up the queue to allow them to inflict strategically timed attacks. The Armour System ability is also another good choice, as it’ll give your allies a health boost plus +1 Armour. Plus, her Gremlin healing ability only takes one turn to recharge, so your team won’t need to take Medkits out.

With Verge, Battle Madness, Stupor and Slam are your friends. Battle Madness adds someone to the neural network and more often than not, the enemy will attack one of its allies. Plus, you can still shoot at an enemy after using it, letting you inflict double damage.

Stupor has the chance to stun an enemy for up to two turns, which is particularly useful on the likes of Andromedons. Levitate and Slam are also excellent moves, as Levitate removes an Aggressive stance from an enemy during a Breach, and using Slam will inflict 1-3 damage on them afterwards. Boosting Verge’s aim, crit chance and dodge makes him particularly deadly with his assault rifle, so regardless of who else you recruit, he’s a must. 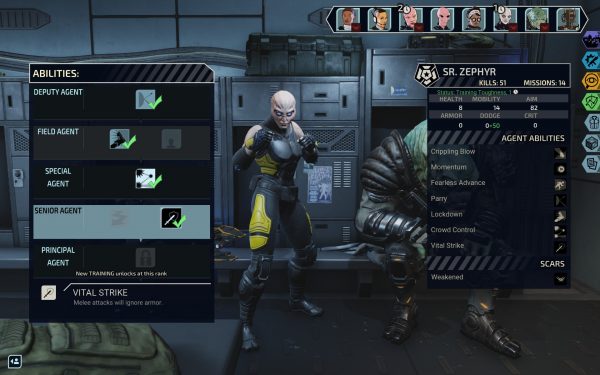 Zephyr’s abilities are all melee-based and her high mobility worked well in the final encounter. The Lockdown move means that if anyone moves close to her, she’ll roundhouse kick them in the face, which can kill an already damaged enemy on the move.

Her Crowd Control move is also brilliant, as it does some damage to all enemies in a specific area. Her Momentum move can either be to Parry attacks – very useful – or move to cover, or to a location where she can interact with a terminal. Having high dodge on Zephyr also works well, as she’ll often be in areas without cover due to her melee strikes.

Finally, there’s Godmother. Improving her aim and the shotgun is key here, as well as giving her AP rounds that ignore five points of armour. Her Last Stand ability is good as rather than starting to bleed out, she’ll retain one bar of HP and will take her turn immediately after regardless of where she was in the queue. This means you can use a healing item or retreat her to safety.

Godmother’s real OP move at this stage is Untouchable, where an attack will miss her if she downs an enemy during her turn. It goes without saying though that her real power lies with the shotgun, so keep an eye on her health and get her up close for some devastating blows.

Now that you’ve chosen your gear and squad, let’s take a look at how to beat the boss. 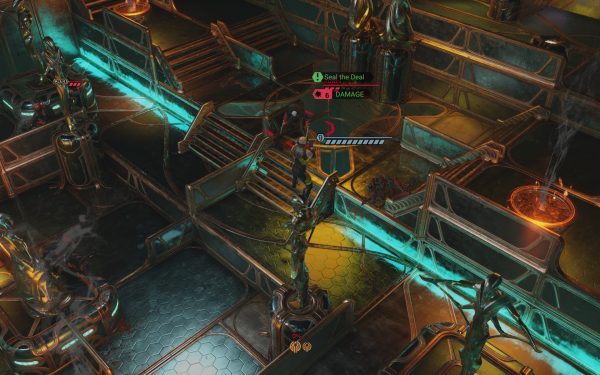 The first two rounds of this mission are pretty easy. As Zephyr has the Fearless Advance ability, I would always put her last in a breach and make sure you deal with all the Aggressive enemies you can so she can run up and take a straight shot.

There are three encounters in total, and with the first, you’ll be up against a few androids and some big Mecs. Depending on which door your breach, you’ll be able to take out three or four enemies in one go. The next encounter involves at least four Ronin type enemies as well as an Andromedon. Zephyr’s main attack and Parry combo work well here, and the rest you can keep back at a safe distance. There will be a second wave where you’ll face the majority of the Ronin enemies, so set up some Overwatch at the doors to do some damage.

After this, you’ll have the final Breach and encounter. I was lucky that my Breach roll included Hard to Hit, where enemies deal -1 less damage and First Impression, where first through the door was guaranteed to land the first shot. I put Godmother through first as she was dealing about +8 damage with her shotgun, plus the AP rounds meant she tanked armoured units.

You’ll see a big Psionic Gate in the middle of the room as well as Sacred Coil’s leader, Bellus Mars, who has Ronin-like abilities. You need to clear the room and shut down two generators, though more challenging enemies will spawn.

It doesn’t make a difference whether you kill Bellus Mars first or last, but he switches around the queue a lot and deals a lot of damage, so I took him out first. You can use Terminal’s heal as well as take a shot when it’s her turn, so between Godmother, Verge and Terminal, you should be able to take him out in no time.

After that, use Zephyr’s melee attack to take a swipe at one of the lower-ranked enemies, then run her over to the first generator to shut it down. Depending on the difficulty level you’re playing on, there’s a chance this action will summon a Gatekeeper, as well as force-spawn the incoming reinforcements, which were two Chrysalids and an Andromedon. Use Verge’s Battle Madness to turn enemies against each other and Stupor on the Andromedon to keep him out of action for a bit while you focus on the Gatekeeper, Ronin and other enemies.

You can also use Zephyr’s Crowd Control ability after the summon, as they’ll all be standing in one small area, so it would be a good idea to damage a large group then send Zephyr running to the next terminal. The gate will explode and inflict more damage on the crowd, which should make things a little easier.

The Team Up squad ability is super useful as you work out a gameplan, as it’ll move an ally to the turn after you. This was especially useful if Zephyr or Verge comes after Terminal, as they both deal a lot of damage and Verge essentially gets two OP moves that made a difference in the final stages.

After that, you’ll just need to keep chipping away at the Andromedon and Gatekeeper until they are defeated, ending the mission. It’s definitely the most difficult encounter in the early game, so if you’re new to XCOM games, maybe choose a different faction to begin with.