Everyone wants it, only the fortunate have found it.

The endgame of Animal Crossing: New Horizons is to make the kind of home that would give Kirstie Allsopp a heart attack. No but, like, in a good way. And to that end, thousands of players have their sights set on one elusive item: the ironwood kitchenette. It’s a fetching piece of furniture boasting a polished sink, wooden counter, dark accents, and storage space for precisely two plates. The look is traditional yet modern, homely yet sophisticated. And for many players it’s proving absolutely indispensable.

The ironwood kitchenette is part of a ten-piece set including a similarly stylish bed, chair, cupboard, dresser, clock, and table. These are the infinity stones of Animal Crossing, essentially. But what makes them, and in particular the ironwood kitchenette, so sought-after? Why is everyone so enamoured with the ironwood? To find out, I asked everyone. Right in their face. 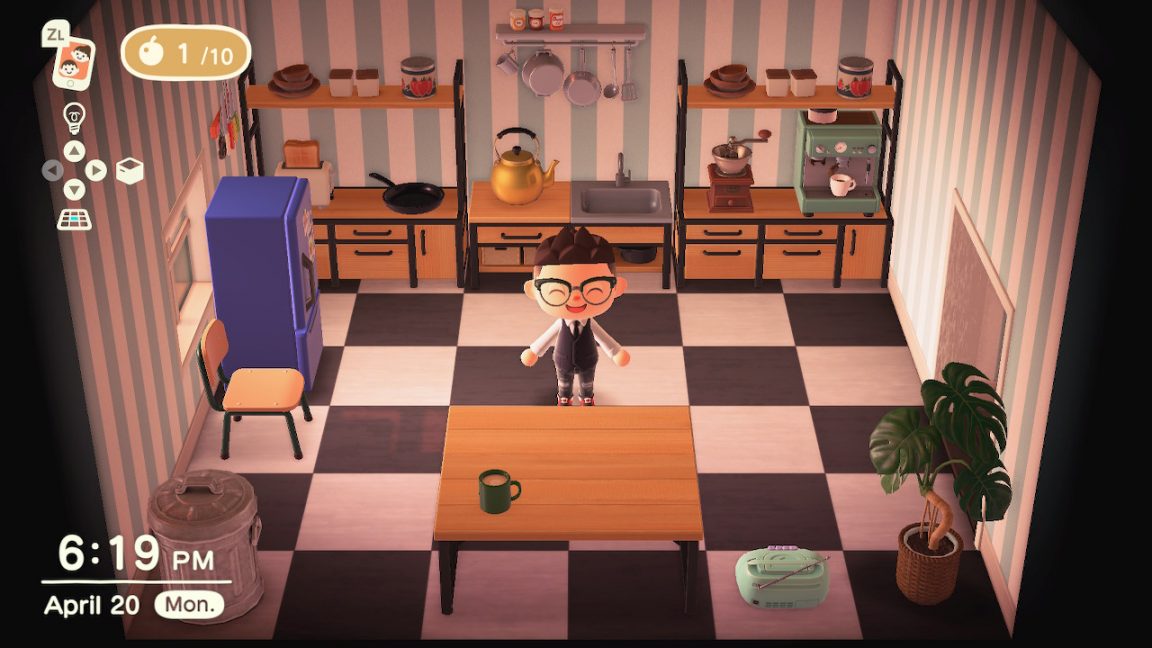 For supatoedie, a member of the r/AnimalCrossing subreddit, it’s the authenticity. “Basically because, even though there are so many furniture items in Animal Crossing, people tend to want to create the feeling that they’re home. They want tables, closets, chairs, and yes you’ve heard it: kitchens.” The ironwood kitchenette makes for a vital component in fulfilling the dream of home ownership. That is, ownership of a somewhat realistic home, as opposed to one filled with giant clam shell beds and knock-off Godzilla statues.

Another subreddit member, Kimmy, echoes the affection, adding that desire stems from its versatility: “I think [it’s] because the ironwood series has multiple color customizations, and the design itself is modernised, yet includes a more traditional element with its inclusion of wood.” Those who wish can modify the hues of all items in the ironwood catalogue by selecting the lumbar it uses, whether birch, teak, walnut, oak, or old. This increases the chances it’ll fit with your chosen decor. 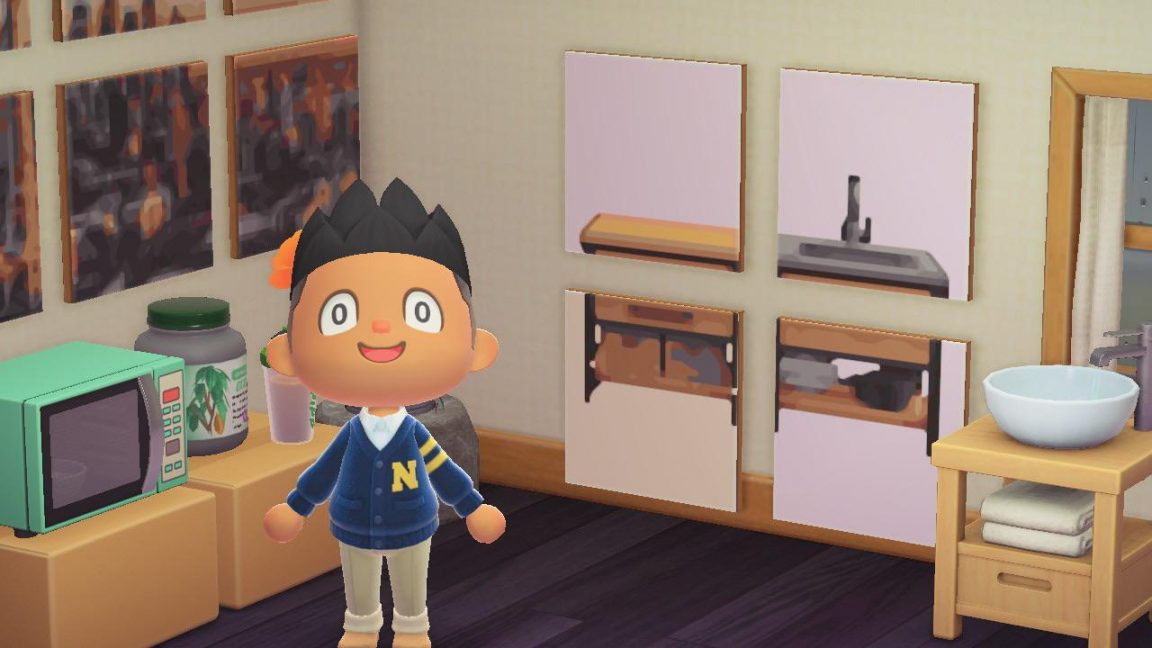 As well as its personalised quality, a player called GudraFree offers up several more compelling reasons for why the internet is currently awash with thirsty homewear memes: “The lack of similar furniture in the game, a modern design that’s appealing, and it being part of the ironwood set – one of the very few full sets in the game – meaning it has matching items that look good together. Also the recipe is given to every player by purchasing it in Nook’s Cranny, so every player is aware of its existence.” It’s there, taunting you, just out of reach.

While you can buy the plans from the Nook kids early, don’t be fooled by its apparent availability. Actually crafting the ironwood kitchenette is another matter entirely. That’s because on top of the required load of wood and iron, you’ll need a cutting board and ironwood dresser, too. These pieces of furniture are separate DIY recipes – two in a huge pool – and the only way to get them is pure luck. They might as well give you blueprints for the Penrose Steps.

You can scour beaches for bottles, shoot down balloons, shake trees to see what pops out (possibly getting stung by wasps in the process), and barge uninvited into other residents’ dwellings in the hope they’ll share a DIY recipe with you, but there’s no consistent way to obtain them. That is, if you play alone. 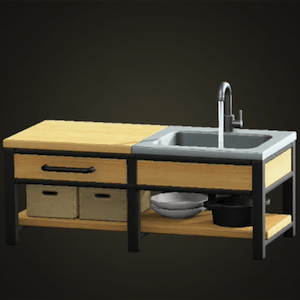 Venture online, however, and you’ll find a community poised to lend its services. Crazycatjuly says: “Someone helped me get the cutting board DIY so I could craft the kitchenette. It was a kind gesture from a stranger, so I felt quite happy. It’s nice when people do nice things for each other.” Crazycatjuly, in turn, paid this kindness forward. “I felt happy when a stranger helped me so I just wanted to make someone else happy.” Babypenguin00 similarly spreads the love, saying: “I’ve already given all of my friends one of their own!” The ironwood kitchenette is bringing people together. Nothing says ‘I like you’ like the gift of a new house fitting.

Where some provide freely, others want to profit. “It takes a lot of resources to make,” says MenardiParty, “so I do charge a bit for it, but never unfair prices.” It’s understandable. Just because you’re making buddies doesn’t mean you can’t make bank. Search ‘ironwood kitchenette’ on Twitter on you’ll even find players using it as the grand prize in auspicious giveaways: to be in with a chance of winning, simply like, retweet, and tag a friend. Some of these competitions have amassed upwards of four thousand likes. If you want clout, think about investing in virtual kitchen fixtures. It’s the talk of the town.

my first animal crossing giveaway!
one winner will receive everything in this picture,
& the ENTIRE ironwood set diy + cuttingboard diy!

But there’s one final, darker way of getting the ironwood kitchenette: time travelling. Manipulate the Switch’s clock and you can up your chances of encountering one via the methods mentioned. It’s a divisive practice, but difficult to resist if you’ve got a specific item in mind. “If you are a solo player, I can see this being the only viable option to craft specific items,” says Kimmy. As for GudraFree, “I like to get the tick on every recipe for crafting it at least once, and this one is going to haunt me for a while it seems.” You may time travel to make your house more liveable, but could you live with yourself?

Supatodie says: “I would never time travel to get furniture, simply because I feel like obtaining furniture in a natural way is way more fun. It gives you more creativity since you’ll have to make something good out of the selection of furniture items you’ve obtained.” That’s why the ironwood kitchenette is so openly coveted. Rather than discordantly mixing miscellaneous items, you can use it, and its wider furniture family, to give your room a consistent theme. “I’ll probably use it too in a kitchen if there aren’t any good-looking sinks in my possession by then,” says GudraFree. 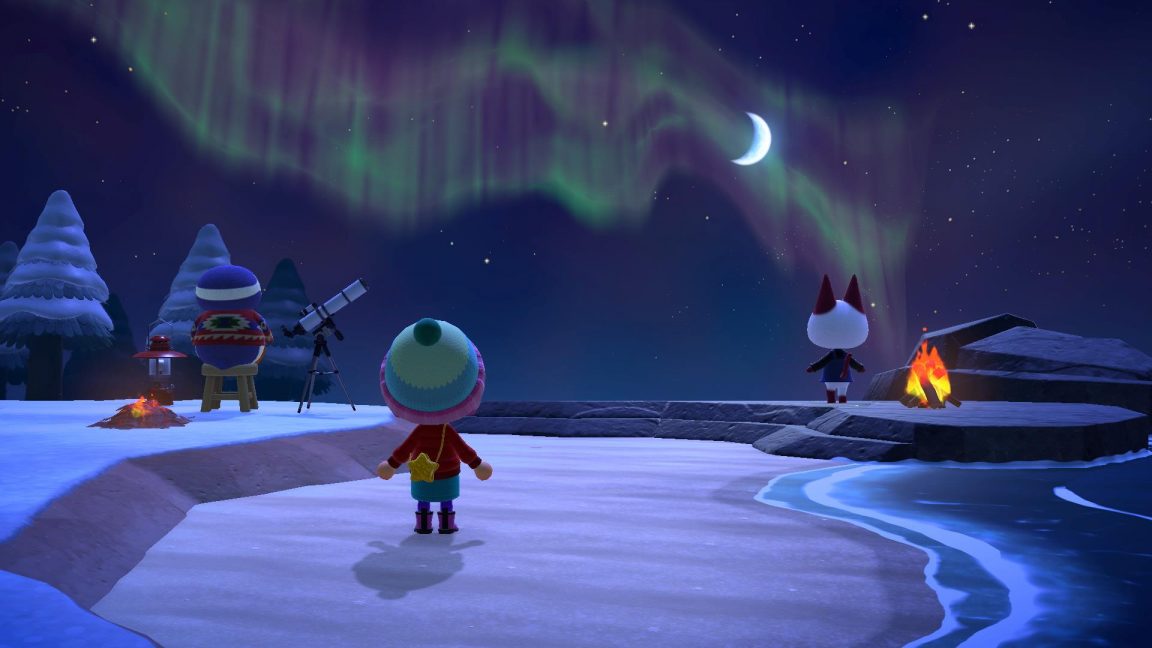 For scores of players right now, the ironwood kitchenette is how to make a house a home. Spiritual fulfilment, it appears, takes the form of a polished wooden work surface. But the journey won’t end there. Once you’ve snagged your coveted item, you move onto the next one. And the next.

After successfully obtaining their dream kitchen, GudraFree is currently “looking for a modern-looking king size bed, but I’m not even sure it exists in this game.” Babypenguin00, meanwhile, wants “more food-specific items. For example, the old game had a box of pizza.” And Menardi Party says: “The moon chair and the wall-mounted 50-inch TVs are both on my wish list.” That list, seemingly, is neverending.

Animal Crossing is nothing if not the relentless pursuit of home improvement. Right now, the ironwood kitchenette is Animal Crossing’s white whale, an elusive beast driving players to ecstasy and despair. It’s a phenomenon. An obsession. And it ties the room together quite nicely.