You can still see glimpses of the game Bethesda thought Fallout 76 might be. Wander through West Virginia for long enough and you’ll happen across a workshop – a camp you can capture for a steady stream of resources, so long as you can defend it against waves of feral ghouls, super mutants, or potentially, other players.

In a different game, these might be flash points for conflict, incitement to steal and murder. But in all my time with Fallout 76 – scores of hours across a year and a half – I’ve almost never seen players come to blows. While the influence of DayZ is clear in the game’s survival mechanics, a community reared on single-player RPGs chose not to engage with its competitive systems. Some visited each others’ houses and joined up to speed through quests. Most, in my experience, have simply ignored each other. 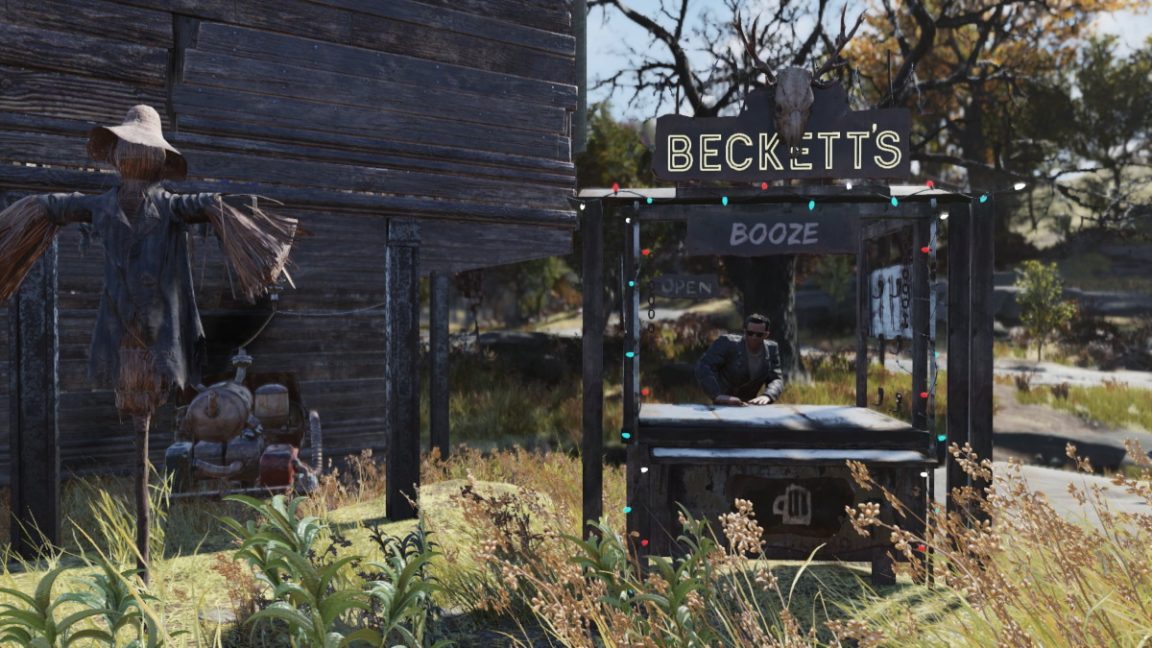 Wastelanders, the free new expansion announced almost a year ago, is an ambitious attempt to introduce a more artificial form of humanity to the wasteland. One you can count on to be standing in the spot where you left it, or sitting on the porch of your home, waiting for a conversation at your convenience. Like every other Bethesda RPG in recent memory, Fallout 76 now has NPC hubs dense with named characters, each of whom share a common cause but offer a different perspective. These kinds of areas aren’t unusual to the genre, but they’re what players felt was missing, and act as comforting anchors in a wide and largely hostile world.

I’m particularly fond of Crater, the hole in the ground turned into a warren for raiders returning to Appalachia. Bethesda began humanising its murderers towards the tail end of Fallout 4’s DLC, and picks up the thread again here. There are the usual Mad Max types, of course, but burrow deep enough and you’ll find dapper Johnny Weston: not too gentlemanly to take a tux off a corpse, but proud enough to launder it. And Barb, who finds the upfront nastiness of cold-blooded killers refreshing after a lifetime of judgement from gossiping settlers. In our new age of curtain-twitchers, desperate to relieve the boredom of lockdown by reporting a neighbour to the police, it’s certainly a mood. 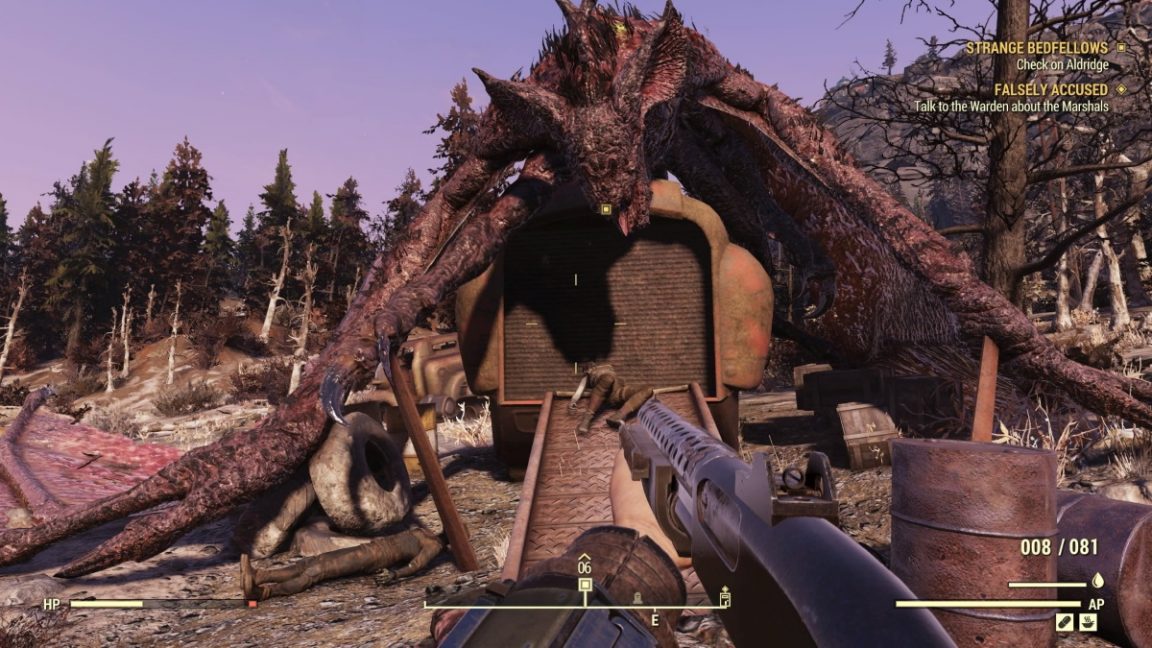 A lot of people didn’t get on with Fallout 76 as it was, but I grew fond of its lonely hikes and uncluttered horizons. Bethesda’s storytelling strengths always lay in level design, anyway: the tales that emerged through a handful of company-wide emails on a still-functioning terminal, or a pair of skeletons arranged just so. Stripping factions from the world only accentuated those qualities, and my worry with Wastelanders was that the skeleton might be thrown out with the rusty bathwater.

In the event, though, this is still a game in which you can easily go for hours without speaking to another soul, scripted or otherwise. The new faction quests are interweaved with older missions about collecting tapes and checking out radio signals. In order to even earn the attention of the raiders in Crater, I had to put together a false broadcast that indicated their old leader, David, had returned from the dead. And to do that, I trekked about the map, picking over David’s past as a cutthroat executive for big pharma – a trade he gave up the day the bombs dropped, dropping the pretense of civility to found a gang named the Cutthroats. I held strange conversations with Rose, the robot David built to replace his dead girlfriend but programmed only with the ‘fun’ parts, leaving out the tragedy that eventually engulfed their relationship. A quest I’d planned to race through instead became a slowburn character study, and I found myself slowing down with it. This is a game that refuses to be rushed. 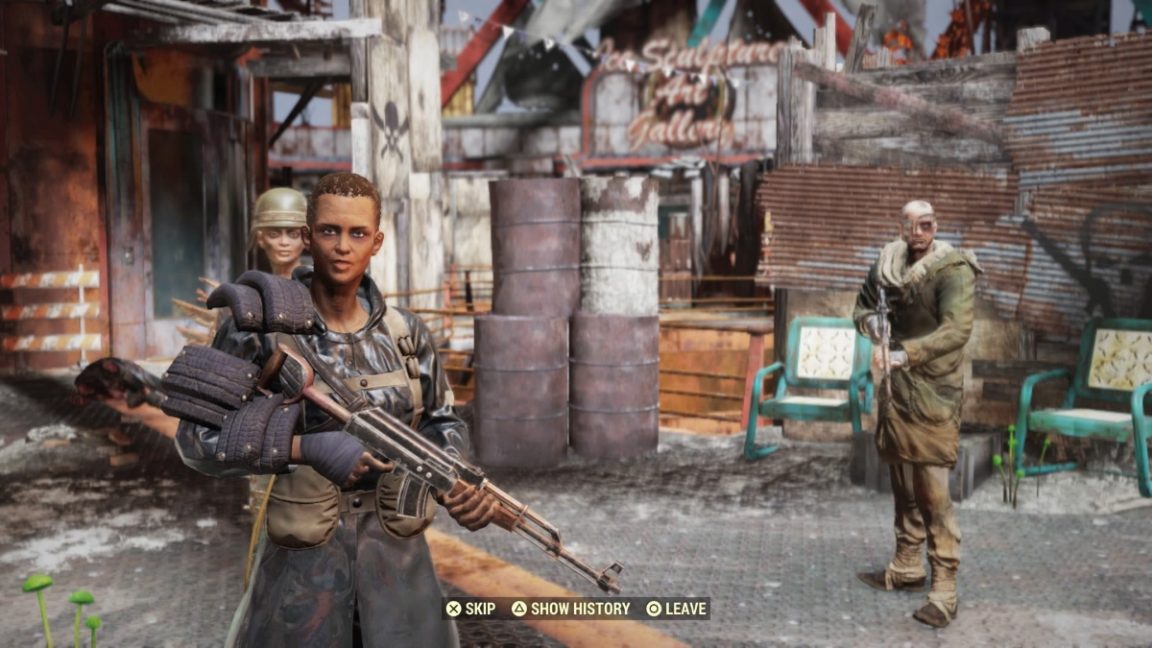 Even now it has a future to plot with its new residents, Fallout 76 remains obsessed with the past. It’s always been a game for players who prefer to rifle through history rather than make it themselves, and that archaeological bent hasn’t changed.

What’s markedly different is the knowledge that there are people out there. While playing through the original main quest, I knew I’d never quite catch up to the characters whose diaries I’d been reading; civilisation had moved on before I’d ever left the vault, along with any sense of urgency. West Virginia belonged to the Scorched and the machines. That’s not true anymore: the voices repeating on the radio and recorded on holotapes have been given corporeal form.

Only longtime Fallout 76 players will truly understand the profound strangeness of stepping into the Overseer’s front room after all this time. To hear her say, with extraordinary understatement, that “we have a lot to catch up on”. The wasteland is alive now, and newcomers will never know just how quiet it once was.

If you’re looking for help romancing allies, or you just need a hand choosing which settlers to back, we’re here for you with our Fallout 76 guides.