Call of Duty: Modern Warfare 2 Campaign Remastered is available now on PlayStation 4, and available for pre-purchase on other platforms, which will release at a later date.

The worst kept secret over the last couple of weeks, Modern Warfare 2 Campaign Remastered, is now available for PS4.

Starting today, if you own a PS4, you can play the fully restored and remastered campaign in up to 4K resolution and HDR support on console. On PC, it will feature an uncapped framerate as well as ultrawide monitor support.

It is available for pre-purchase on other platforms and will be released after being exclusive to PS4 for one month.

If you purchase on PS4 or pre-purchase on other platforms and you will receive the Demo Team Classic Ghost Bundle for use immediately in Warzone.

The bundle includes the UDT Ghost Operator skin, turning Modern Warfare’s version of Ghost into the one seen in  The Only Easy Day… Was Yesterday mission in the Modern Warfare 2 Campaign.

It also has the Task Force and One For One weapon blueprints, a weapon charm, a Finishing Move, a calling card, an emblem, a voice clip for Ghost and two Battle Pass tier skips. 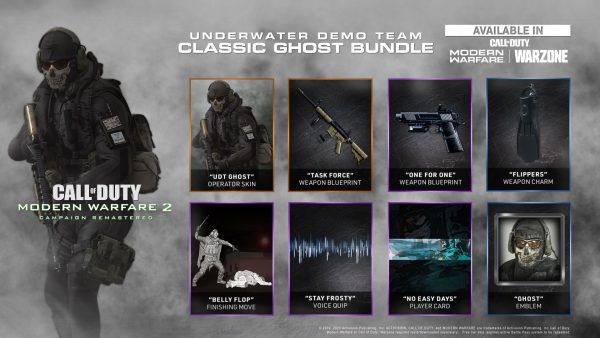