Creating perfect loadouts has always been a core pursuit for Call of Duty players. The desire to min-max, however, has never been more important than it is today with Warzone battle royale. So here’s how we tune our best Warzone loadouts to take home the crown.

If you’re unfamiliar, all players in Warzone BR are able to call in their multiplayer loadouts for use during the match. They can also pick them up from one of the random airdrops. The result is the same: you get three whole perks, as well as two decked out weapons.

Apart from being the only way to get three perks in Warzone, an optimal loadout also ensures you have the tools you need to be ready for the final circles, taking RNG out of the equation.

Before we get to our recommendations, it’s worth keeping in mind that some of the weapons and attachments we’ve chosen may not be immediately available to all players. Although Warzone is free-to-play, those of us who have been playing Modern Warfare since launch have an advantage in the number of available options. There’s no getting around this fact, but hopefully you made enough progress during launch week with all the double XP bonuses to mitigate some of it.

Beyond that, you may notice a running theme with our favourite loadouts: they usually have two primary weapons rather than a main weapon and a secondary. That is because sniping is very powerful in Warzone thanks to boosted headshot damage. A single shot to the head from either of the two bolt-action sniper rifles will down any player, regardless of how much armour they have.

Long-range combat is an essential part of Warzone BR, so you need to be ready to tussle with enemy players at most distances. With all that said, let’s jump in! 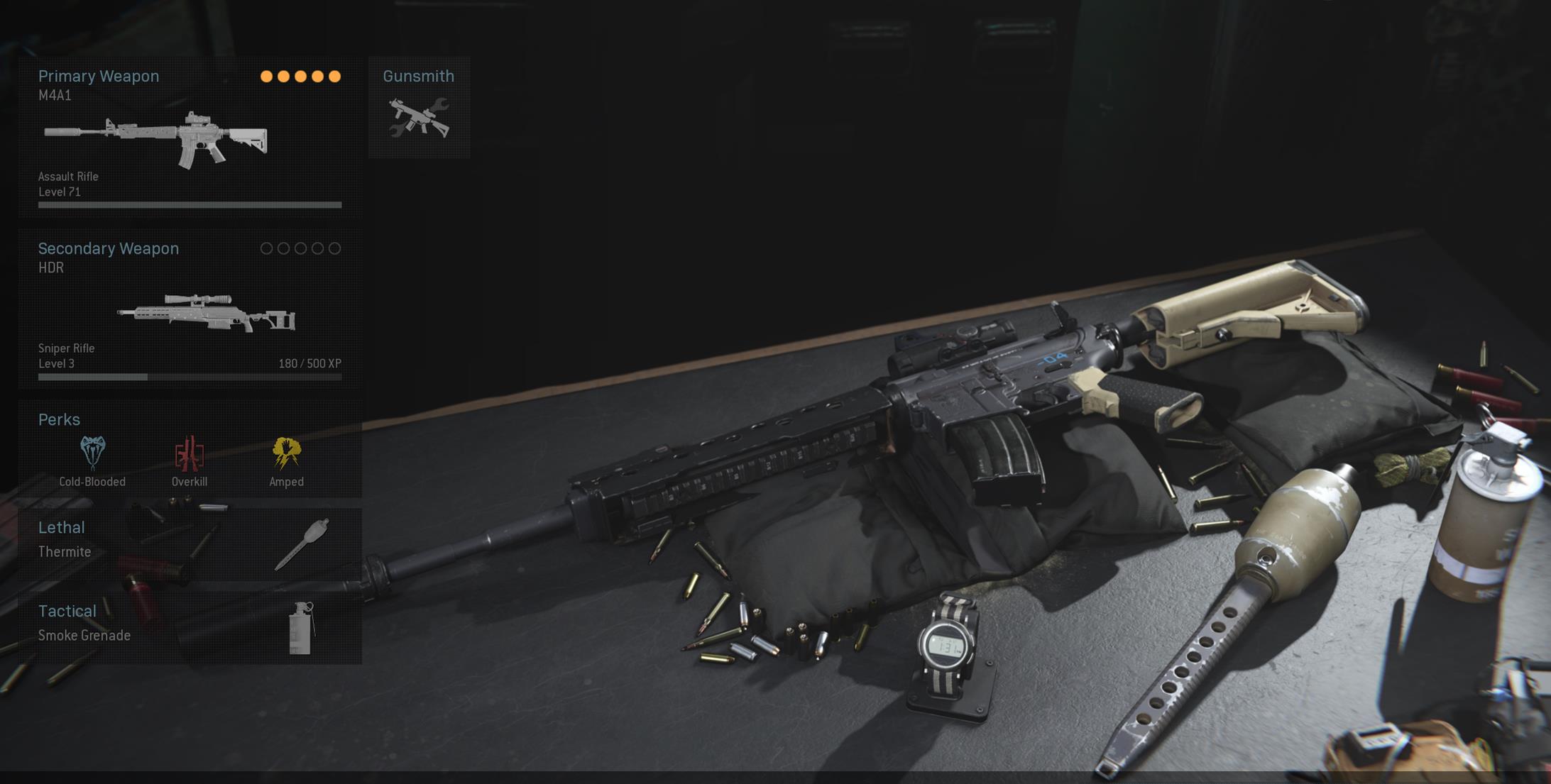 The M4A1 assault rifle and the HDR sniper rifle are both early unlocks in your career progression. They also happen to make a killer combo in Warzone. The M4 is perhaps the most versatile weapon in Warzone (and Modern Warfare). It excels at close range with decent damage, and its low recoil makes it a breeze to control in long-range engagements.

For this loadout, we’ll be setting up the M4 for long-range effectiveness without neglecting close-range performance. Go with this:

This setup offers plenty of ammo while ensuring low enough ADS speeds, and the hybrid scope allows you to quickly switch between close and longer-range threats as they appear. Most of these attachments are fairly early unlocks, too.

Now for the HDR sniper rifle. First, we’ll need the Overkill perk (column two) equipped so that we could bring two primary weapons. By default, a stock HDR is already an excellent long-range weapon. You’re likely not going to have too many attachments unlocked for it from the off, so feel free to use it as is. When you level it up a bit, we recommend this setup:

Presence of Mind lets you hold your breath for much longer, which will help you land those one-shot headshots. The Thermal scope is essential for quickly scanning for targets, but you can switch it for a regular sniper scope if you don’t like the thermal image.

It’s also worth noting that players using the Cold-Blooded perk won’t show up on Thermal scopes. In either case, your scope glint will be visible to enemies (this is true for all sights above 4x), so best not linger too long while you’re scoping. If you must get rid of the scope glint, you can go with the Scout Combat or VLK scopes, but those obviously offer much lower zoom.

For perks, we’ll go with Cold-Blooded to avoid showing up on Thermal scopes, Overkill is a must as we mentioned above, and Amped in column three to increase weapon swap speed between both our primaries. Lethal and tactical grenades can be anything you like.

There’s one other way you could further tweak this loadout, assuming you’re confident in your sniping skills. The M4 setup we noted above is meant for mid to long-range, but you can go with the setup below to create a close-range laser beam:

You won’t need a scope for this one, since it’s only meant for close-range combat. The iron sights on the M4 are very clear, regardless. 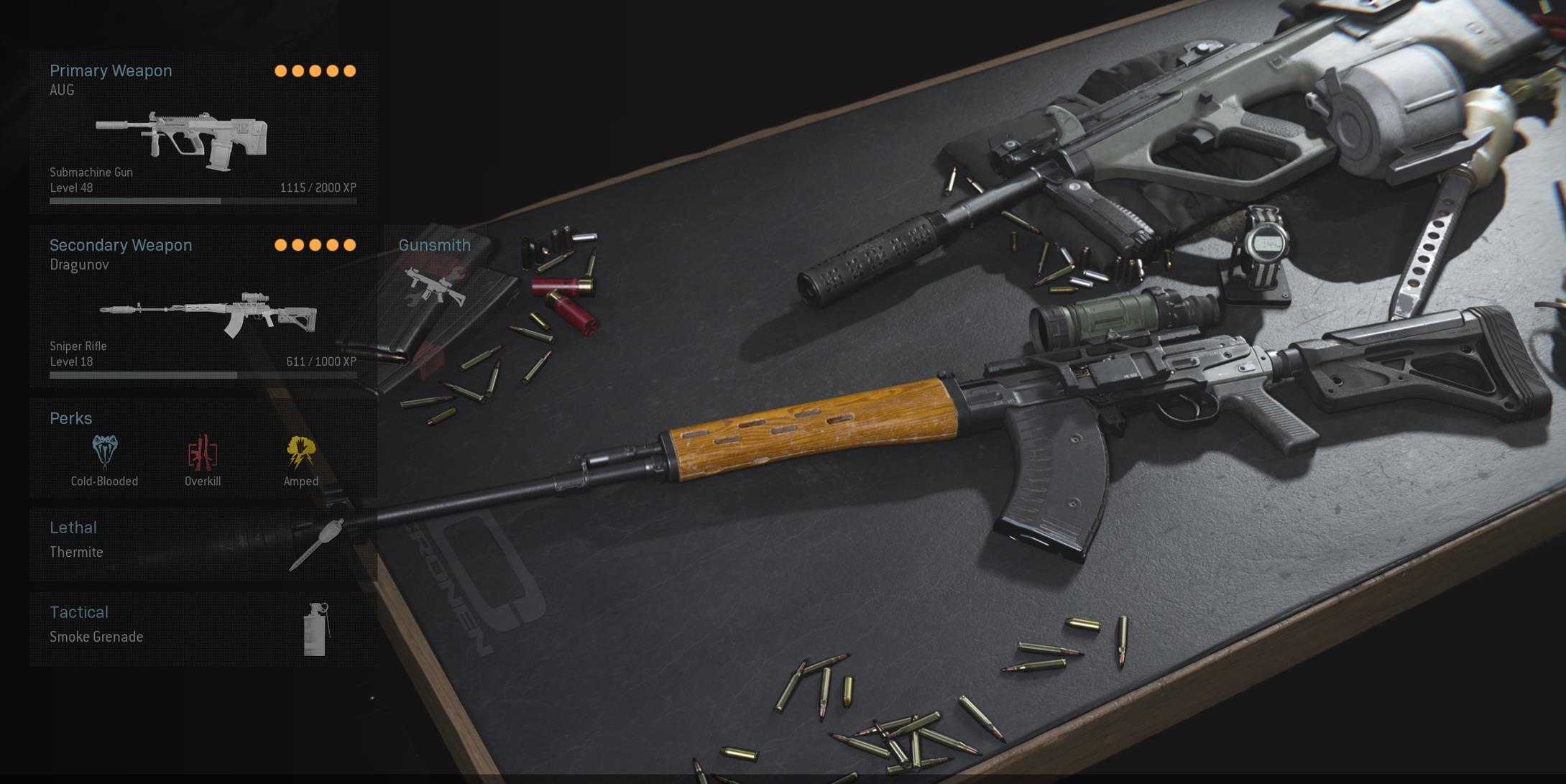 The AUG SMG is one of the most consistent and stable weapons in Warzone. It sits in a nice middle ground between close-range dominance and mid-range recoil control. We’re talking about the 5.56 Nato conversion here, of course, which essentially turns the AUG into an assault rifle. For this, we’ll be setting up the AUG for maximum ammo and effectiveness in close to medium-range.

This setup maintains the AUG’s SMG advantage and inches it closer to assault rifle damage and range territory. As an added bonus, the AUG will continue to use SMG ammo in Warzone despite the 5.56 conversion.

For this class, our secondary will be doing most of the heavy-lifting at range. We’re once again going with the Overkill perk. This time, we picked the Dragunov marksman rifle, a powerful, easy-to-use DMR that can down players in three-four shots. Here’s the setup we recommend:

Fully Loaded can be switched for an under-barrel attachment if you prefer, but we like it because it ensures the Dragunov spawns with maximum ammo when you pick up that loadout. Marksman rifles don’t typically have a lot of reserve ammo, which is where Fully Loaded can really help.

Our perk setup from the previous class stands, so Cold-Blooded, Overkill, and Amped are the go-to. Once again, feel free to pick the lethals and tacticals you’re comfortable with. 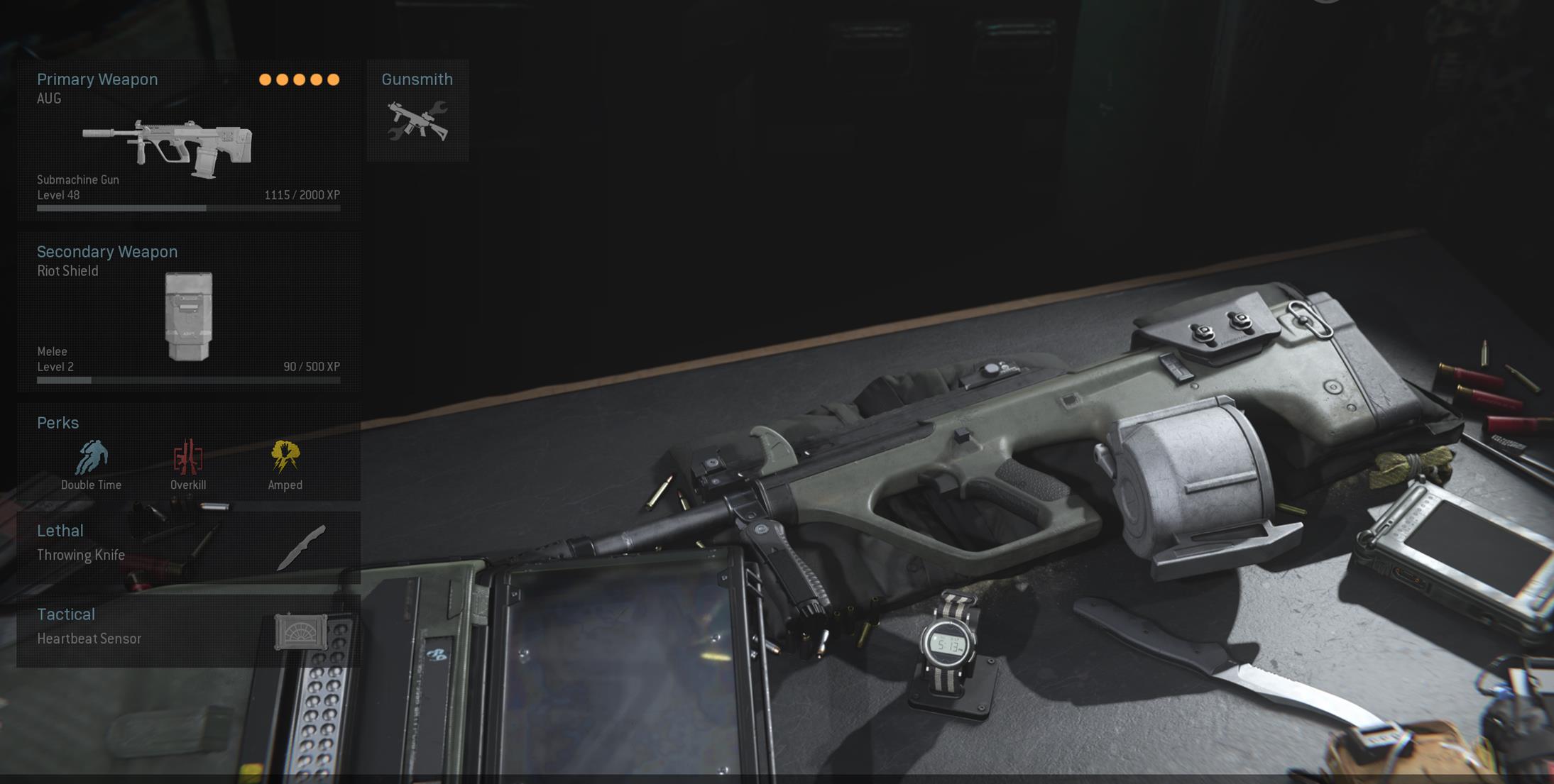 This next class setup is admittedly a bit corny, but nothing is too cheap if it’s part of the game. You may scoff at it, but you can bet someone out there will make use of it.

In Warzone, riot shields are exactly as annoying as they are in multiplayer. A shield will always block damage from all areas it covers, which is most of a player’s back where it’s stowed. You can equip it if you’re pushing a dangerous area to prevent damage from the front. You can even do this while crouched. While this slows you down, it makes you essentially untouchable from the front, and will force opponents to scramble in the middle of a firefight.

Shields do not break, no matter how many rounds get fired at it. An effective way to kill a shield user is to use C4 or a Semtex (sticky grenade), but explosives are rare in Warzone so this may not always be an option. You can also try setting the area around them on fire using a Molotov or a Thermite, or find a way to deal some AoE damage using a rocket launcher – so long as it’s not a direct hit to the shield.

Shields are also helpful when squad mates all stack up behind the carrier when pushing buildings, so they could come in handy when storming a camping spot. Even in long-range engagements, looking through the window of a shield lets you survey the area without worrying about snipers.

We’re going to rely on the services of the AUG here again using the same loadout we recommended above:

For this class, we’ll also tune our perks, lethal and tactical for maximum bullshittery. We’ll run with the Double Time perk, since you’ll be doing a lot of running as a shield user to re-position and avoid getting flanked, the Overkill perk, and Amped to speed up swapping speed between the shield and your primary.

For lethals, we’ll go with a Throwing Knife, because they’re fast to throw and can down a player pushing you in a pinch, as well as a Heartbeat Sensor in the tactical slot. Cold-Blooded players won’t show up on it, but it’s incredibly useful when knowing where campers are and combos nicely with the shield when fighting indoors.

The Grau 5.56 is one of the Season 2 Battle Pass reward weapons. It’s unlocked fairly early at tier 15, regardless of whether or not you own the pass. The Grau is essentially a more accurate M4 that’s better at range, but sacrifices close-range effectiveness a bit.

We’ll set this up for mostly mid-range engagements. Our attachments mainly help with recoil and sway, but this setup can also be used for close range with the hit of a button. Just be mindful that ADS speeds won’t be the best here. Go with this:

Using this, you’ll be surprised how consistently accurate you are at range while remaining decent whenever you get pushed. We’re not picking Overkill this time, so you’re free to equip any secondary here. We recommend the M19. It’s a fast-firing, accurate pistol. If you go with the M19, pick these attachments:

For perks, it’s once again another one for Cold-Blooded, and we’re going with Ghost in column two – to stay off UAV scans – and Amped for perk three. You may be wondering why we picked Amped if we’re not using a heavy secondary, and that’s because the idea is to drop your sidearm ASAP for another, more powerful weapon.

That choice is ultimately up to you. You could go for a world spawn P90 or MP7 for maximum close-range effectiveness, or pick a dead player’s sniper or marksman rifle. Either way, Amped is the way to go.

The best of both worlds

The FAL is one of those weapons people tend to sleep on. In the right hands, it can slay in mid-range and double as a budget DMR long-range. With this loadout, we’ll try to get the best of both worlds. Set it up like this:

The VLK has a slight ADS penalty, and it splits the difference between strictly close-range sights and the more high-powered scopes. You can go with a hybrid, if you like, but the VLK works just fine. We added in a Merc Foregrip to help with the recoil, because you’ll need to be accurate to hit follow-up shots. This is admittedly a higher-skill weapon compared to the M4, but spending the time to master it is worth it.

For the secondary, we’ll go with a shotgun of your choice. We recommend the R9-0 because of its fast fire rate and double-barrel design. It’s devastating in close range, but not really anywhere else. Pull it out when you absolutely need it.

Once again, we’re using Cold-Blooded, Overkill, and Amped for perks. This particular loadout just demands a Heartbeat Sensor, especially since your shotgun will make it easy to clear those buildings. But to do that well, you first need to know where they’re camping, which the Heartbeat Sensor will help with.

The sensor is a not a fool-proof system, so just because nobody shows up on it, doesn’t mean you’re on your own. Listen for footsteps and try to predict where they’ll be. When it comes down to it, no automatic weapon will be able to beat your shotgun in CQC. You can pick any lethal for this class, but you can’t go wrong with a well-cooked grenade. 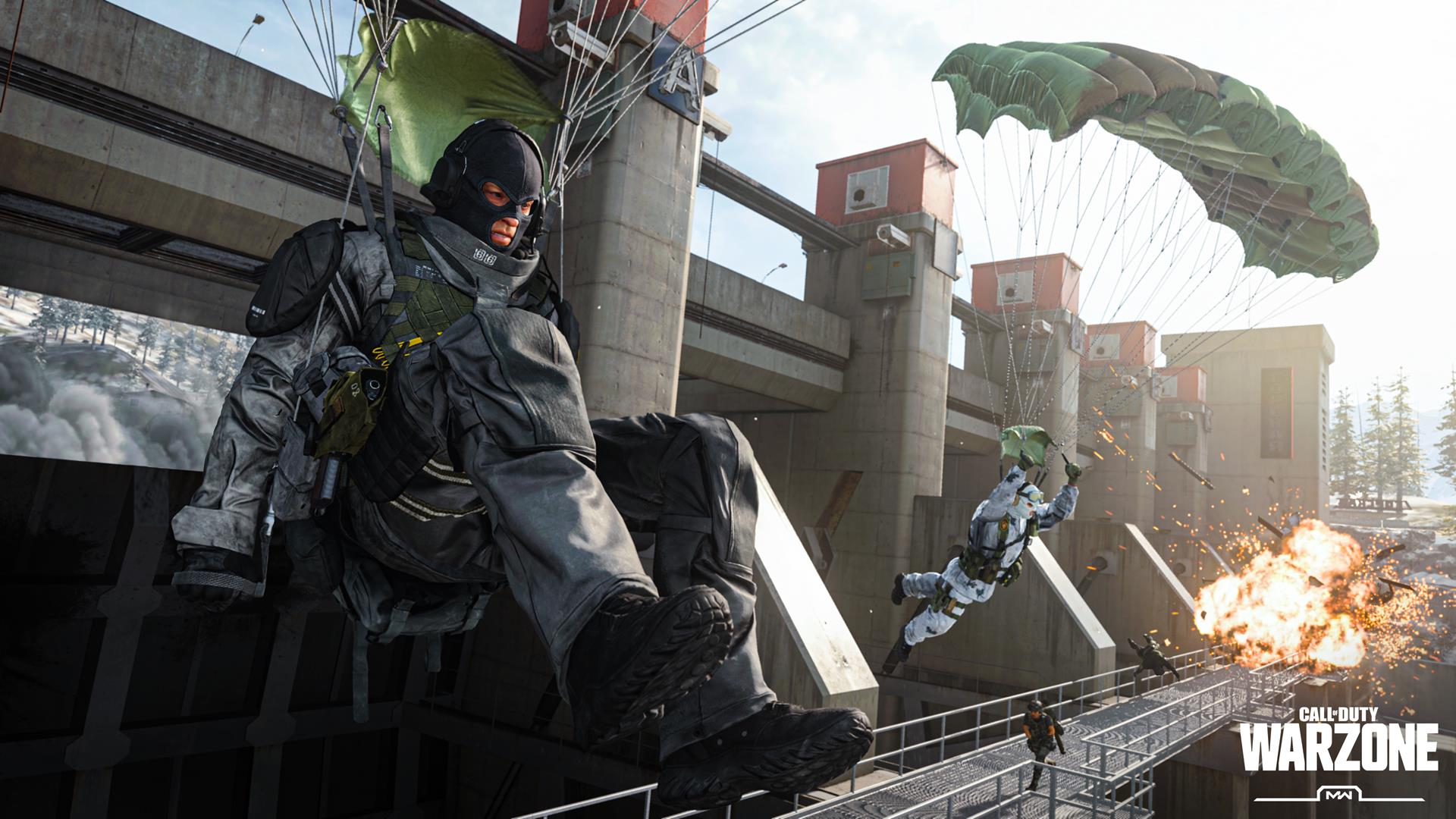 A final, incredibly helpful thing to know is that you should always have more than a single loadout saved in your custom classes. Always have one with Cold-Blooded, Ghost, and Amped. Assuming you have the cash/time to call in two loadout markers, call in your Overkill loadout first, then call in another with Ghost. Once you get the new, Ghost-equipped loadout, go back and manually pick up the weapons you just dropped from the Overkill loadout.

That way, you get the best of both worlds: a stealthy class with Ghost, and the added benefit of having two primary weapons. In multiplayer, this would be impossible, but not in Warzone.