Pokemon Mystery Dungeon: Rescue Team DX launches for the Nintendo Switch on March 6, 2020. It’s an official remake of the original pair of Mystery Dungeon games (Red and Blue Rescue Team) that came out for the GameBoy Advance and Nintendo DS in 2005 (or 2006 in North America and Europe).

A recent post on Reddit drew attention to the presence of shiny Pokemon in Pokemon Mystery Dungeon – a feature that wasn’t present in the original games. You can check out the post below, where you’ll see a shiny Ampharos, or check out the full video over on Gamepur.

This is just one of several new features coming to the Mystery Dungeon remake. A while ago, it was announced that Mystery Dungeon DX would implement a variety of elements that weren’t present in the original games. For example, you can now use Mega Evolved Pokemon in Mystery Dungeon, which means you can exploit the special feature introduced in Pokemon Gen VI that permits fully evolved Pokemon to become even stronger versions of themselves in the thick of battle. Naturally, this includes Charizard, who has perhaps the most iconic Mega Evolution of all. 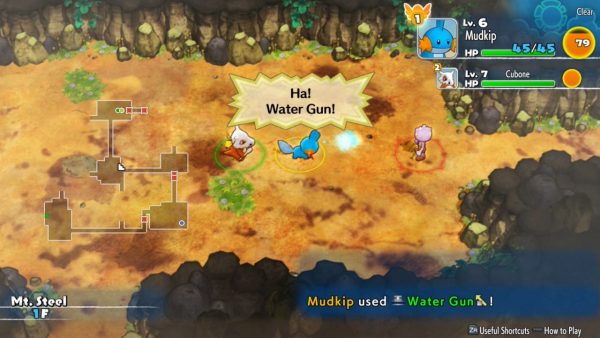 Mystery Dungeon will allow you to encounter around 400 Pokemon as you make your way through the game, all of whom can be recruited to your eponymous rescue team. You can even befriend Legendary Pokemon, who will eschew their former life of self-imposed isolation for a chance to become a gold-rank rescuer.

If you can’t wait to get your hands on Mystery Dungeon, you can download a free demo from the Switch eShop while you wait. Fortunately, your save progress carries over, so if you play some now you’ll net yourself a nice headstart for when the game launches this Friday, March 6. You can also check out our list of the best Switch games, in case you’re feeling like picking up something else while you’re at it.

Pokemon Mystery Dungeon: Rescue Team DX will set you back $59.99 or the regional equivalent.