Resident Evil 3 is an easy game to preview. It’ll probably be an easy game to review, too. I’ve now been lucky enough to have played several hours of the game, but to be honest the hands-on hasn’t changed my thinking too much, nor how I’d recommend it. Did you like the Resident Evil 2 remake? Do you want more of that? Are you okay with a twist towards action? If the answer to these questions is even remotely yes, this game is for you.

Last year’s Resident Evil 2 remake was bloody excellent. It honestly set the bar for what a re-imagining and remake of a classic, beloved video game could be. RE2 Remake is the bar that Final Fantasy 7 Remake will have to clear when it releases in a few weeks – if, that is, that bar isn’t raised a little more by Resident Evil 3.

The good news is that brilliance is still present in this title. The two remakes were developed concurrently, thus the fast release, with the RE3 team working on the early stages of the game while RE2 was being polished up for final release. The two share a lot, with much of that stemming from the shared ‘RE Engine’ that has powered every major Capcom title since Resident Evil 7. That brings with it similarities – the user interface and controls are more or less identical, for instance. The visuals are too, bringing with it all the grime and the stunning photo-realistic face-scanned characters that made Resident Evils 7 and 2 stand out. 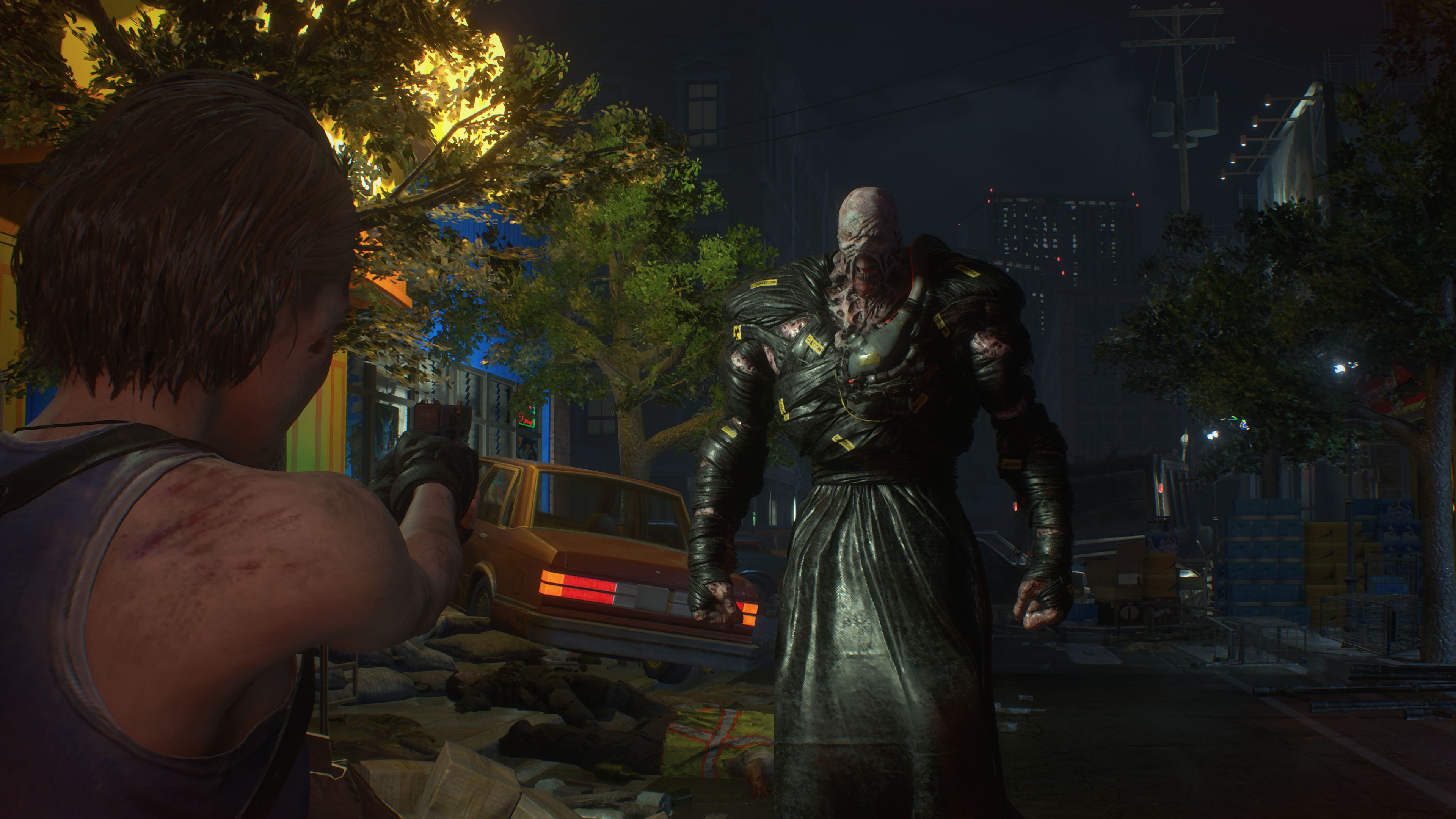 Where RE3 differs is in the general tone and pacing of the game. To use an admittedly often overused movie analogy, if RE2 is Alien or The Teminator then RE3 is Aliens or Terminator 2, where horror gives way to action and bombast, albeit still with the sort of ratcheted tension that causes a similar knot in your stomach to horror. This was true of the original, and the remake is wholly faithful to that.

So, let’s talk about Nemesis. Nemesis is the defining characteristic of RE3 – so much so that the name was added to the original PS1 version of the game as a subtitle. Nemesis is a hulking, invincible enemy that only wants to track you down and kill you, and much of the game’s tension comes not from lurking zombies but from the ever-present threat of Nemesis jumping down from on high or smashing through a wall to get you.

All of this might sound familiar to RE2 remake players, as in that game the role of the ‘Tyrant’ mutant was expanded and tweaked to more closely resemble the concept of Nemesis. Despite the brilliance of Mr. X in RE2 Remake, Capcom clearly didn’t completely exhaust its box of tricks with that reinvention, as Nemesis feels entirely different to face off against. He’s meaner. Deadlier. It makes you lean forward in your seat and tense up. He’s great.

Nemesis is similar to Mr. X in that he’ll chase you and stomp after you, with excellent audio design indicating his rough position through footsteps even if you can’t see him. He’s an evolved mutant, however – a step above – so he’s deadlier. This was honestly the biggest surprise of this Resident Evil 3 Remake hands-on – that Nemesis stands apart from RE2 Remake’s improved, scarier Tyrant.

“When we were building out RE2, right, we knew we were gonna make RE3 as well and there’s some overlap with development,” RE7, 2 and 3 producer Peter Fabiano explained. “The director, he saw what they were doing with the Tyrant in RE2 and he’s like… What the…?! They’re, you know, they’ve taken the Tyrant and they’ve kind of Nemesisified him in a way, right? For lack of a better word.

“So he’s like, okay, well we need to outdo that. I need to make Nemesis feel even better. And then the thing is, you know, what stands out is that in the lore in order to become a Nemesis you have to first be a Tyrant, then you inject the parasite and then you become Nemesis.”

The result is that Nemesis does indeed stand apart as a bigger, better, badder version of Mr. X. He can reach out with lengthy tentacles to grab you from afar, tripping you or dragging you towards him. He’s faster than the Tyrant but can also leap great distances, meaning that if you’re outside – and RE3 features a lot more open city streets than its predecessor – he can simply jump from way behind you to right in front of you, ready to punch your face off.

Nemesis can also use weapons. My hands-on ends with him rocking up with a flamethrower to chase Jill up a building, setting everything around ablaze until the roof turns into a burning boss fight arena. He’s not as fun to encounter in instances like this, where you’re trapped in a video game stand-and-bang where you have to keep fighting, but out on the streets of Raccoon City, dodging zombies and fleeing Nemesis as you weave through the streets to your next objective is exhilarating in a new way.

The ability to flee is aided by one of the most significant additions, copied over from the original – a proper dodge. Achieved by pressing a button while aiming down your gun sights, Jill can rapidly duck and weave forwards to avoid lunging zombies or an attack from Nemesis. Get the timing right and the screen will flash as Jill instead performs a combat roll, almost like when you achieve a perfect dodge in a pure action game. There’s also a far greater abundance of hazards scattered around the world, like exposed electrical wiring and barrels full of lovely, explosive gasoline that can be shot to delay Nemesis or take out a group of zombies.

The pacing set by being pursued by Nemesis and additions like those above is more frantic than RE2, but that doesn’t mean this is a game that doesn’t take time to breathe. Rather, the action is more frantic but time is also taken for other things. You’ll still be solving puzzles by backtracking here and there to discover the key items you need. There’s still missable items all over the place including weapon upgrades and healing items – and with Nemesis chasing you, it’s harder to justify taking a detour to grab them. The setting is often more open, but there’s still a claustrophobic energy that means this is a more restrained experience than some of the other more action-packed, zombie suplexing, boulder-punching Resident Evil titles.

At one point you guide Jill through a claustrophobic maze while nightmarish, scuttling creatures stalk her. In another, you must solve a rudimentary puzzle to reroute a Racoon City subway train in order to provide an escape route. Inside buildings, the pace often slows: Nemesis can’t always follow you, so it’s just you and the zombies. The pace undulates between these various states, and in turn will hopefully mean no individual element of RE3 outstays its welcome in the final release. 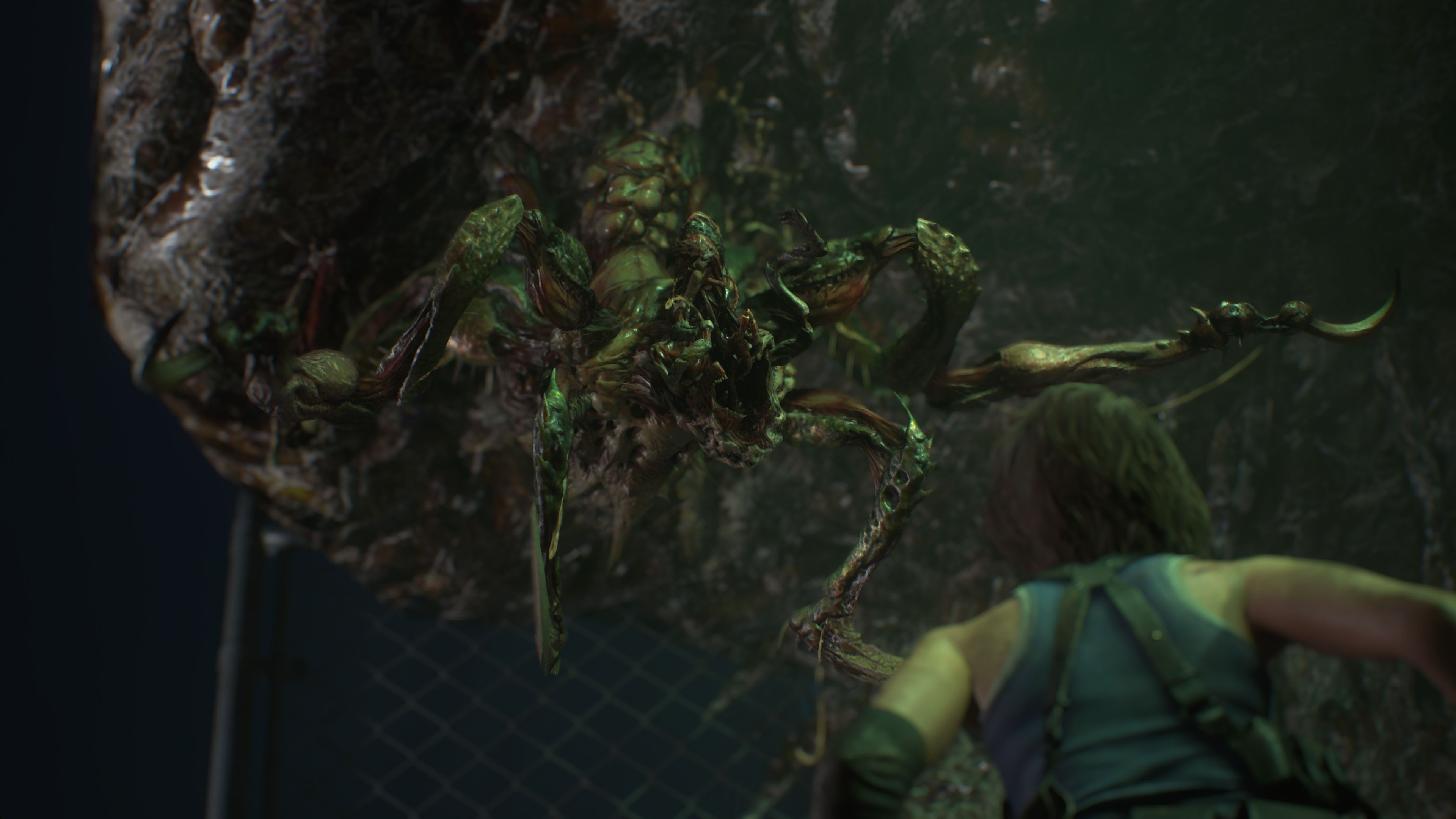 Like I said, this is an easy game to preview. The original Resident Evil 3 began as a spin-off and was uncerimoniously promoted to a numbered Resident Evil when Capcom realized the next game as originally envisioned wouldn’t be ready in time to release as an original PlayStation game. As such it was a workmanlike sequel – iterating and building on RE2’s design and systems but not reinventing.

Based on the preview build I played, this remake is much the same. It builds on the excellent work of the Resident Evil 2 remake – turning everything up to eleven and testing the very structure of the game’s design by stretching it as far as possible. The result is likely to again be just as successful as it was in 1999, if not more so.

All of this also leaves one questioning what might be next. Any remake of RE4 would have to be significantly different to RE2 and 3, and there are still juicy loose ends from RE7 for the series to tackle in an eighth entry. Perhaps we’ll get one or both early next generation – but for now, be rest assured that RE3 Remake is shaping up to be a perfect send-off to what has been a series-redefining generation for Resident Evil.